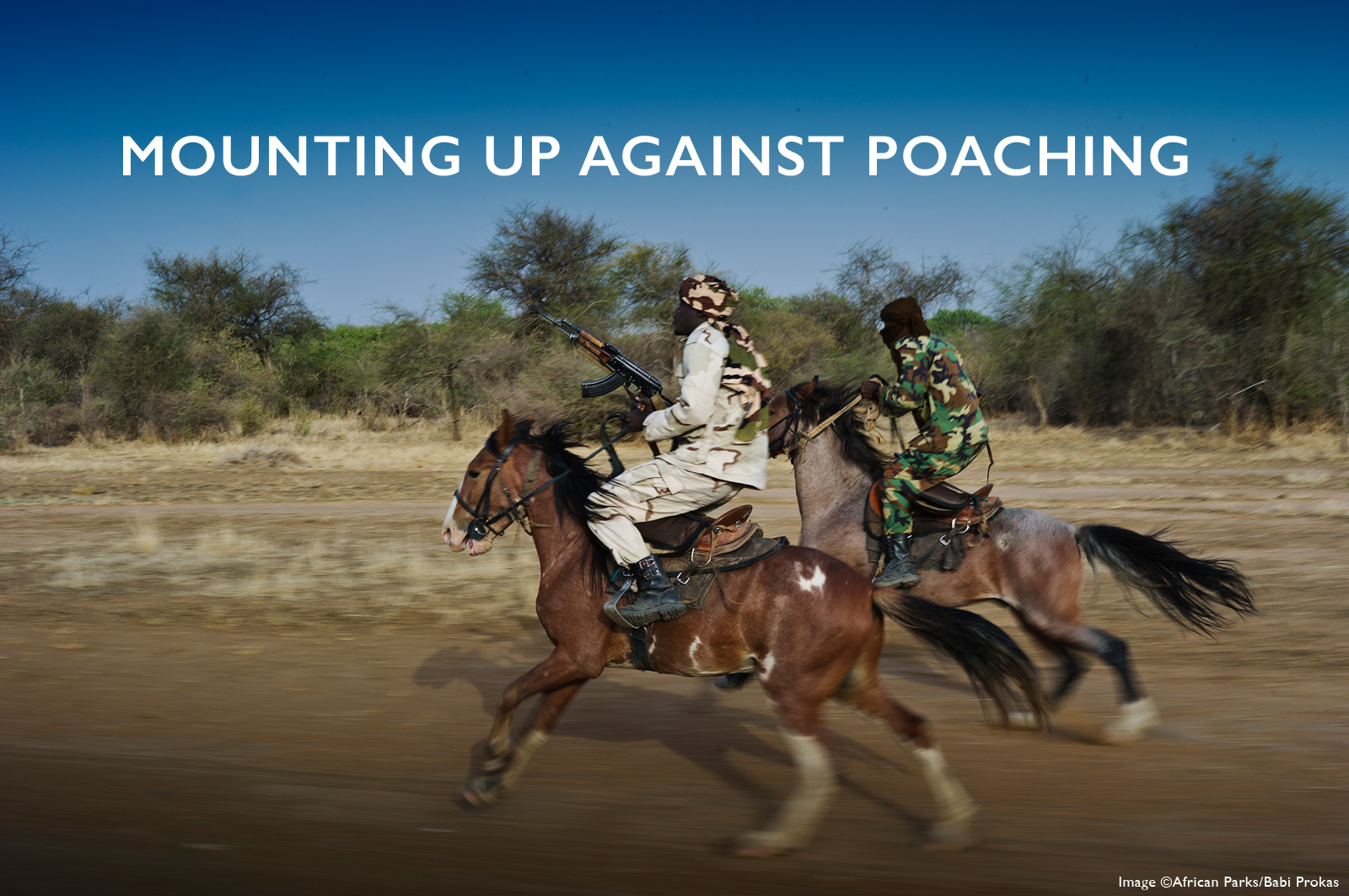 HOW HORSES ARE HELPING SAVE AFRICA'S WILDLIFE

Since man tamed the horse, the majestic animal has gone from being a means of transport to a tool of industry and war. Human society has advanced on the backs of horses, but we have since dismounted, finding little use for horses other than leisure. However, in some remote corners of Africa, the horse plays a crucial role in conservation. Perhaps it’s time we mounted up again.
Some wildlife areas are inaccessible by vehicle or plane and are too vast or treacherous for man to patrol on foot. But here the horse comes into its own, giving conservation professionals and rangers access to areas that would otherwise suffer heavily from poaching. One area, in particular, is Zakouma National Park in Chad where African Parks, who took over management of Zakouma in 2010, uses local rangers who are natural horsemen to patrol vast areas of the park.

Local poachers are natural horsemen, but then so are the park rangers

‘Zakouma undergoes an astounding transformation during the rains when much of the park becomes inundated with water,’ says Darren Potgieter, Field Operations Manager of Zakouma National Park. ‘At this time most roads become completely impassable to vehicles, headquarters gets cut off from the western part of the park and other access is severely restricted. There is a critical period at the beginning of the rains and again at the end when it starts to dry up when vehicles cannot get around but one can still move on horseback. Historically poachers would take this opportunity to penetrate the park on horseback to shoot elephants. During this period horse patrols are our only means to access and provide the spatial coverage required to protect the elephants.’
Even in the dry season, when foot patrols and vehicle access is possible, horses play an important function in that they allow rangers to cover a lot of ground rapidly and with minimal effort. Horses also allow improved visibility to the rider in long grass. ‘There is also a “fighting fire with fire” element to the use of horses,’ says Potgieter. ‘The primary poaching threat is from armed horseman, so follow up, tracking and intervention are best done on horseback.’

As part of a wider anti-poaching strategy in Zakouma, the horses have played a vital role in halting the slaughter of what used to be vast elephant herds. In fact, they have been so effective that there has not been one incident of poaching in Zakouma for over three years. Horses are also used to track the family herds equipped with GPS satellite collars and there is always a horse patrol team within earshot of the breeding herd.
Zakouma National Park has 4 horse patrol teams, together with foot patrol and motorbike patrol teams comprising a total of 70 rangers (52 active in the field, the others are eco-guards, radio operators, drivers, gate guards, etc.) and 32 horses, all Chadian stallions descendent from the Spanish Barb or Berber horse believed to have originated in North Africa during the 8th century when Muslim invaders reached the region.

Local communities are primarily nomadic and have relied on horses for centuries. African Parks has ensured collaboration between the community and the park officials, and horses have played an important role in achieving this. A racing stallion, Horus, was donated by a Chadian businessman and breeder to be used as part of Zakouma’s community program. Horus’s good genes were offered to the nomadic communities around the park and the stallion covered 49 mares last dry season.
This works both ways. A nomad horse, Andrine, was donated to Zakouma National Park as a token of co-operation from a clan of the Ouled Rachid tribe that spends the dry season in the south of Zakouma. ‘We have community game guards in a similar nomad community to the north of the park, that assist the park with patrolling their area on their horses and providing information on a secure digital radio network,’ explains Potgieter. ‘Being in constant contact and in collaboration with the park and the rangers brings tangible security benefits and employment to these communities, and this particular group of nomads would like to start the same program in their area, hence the donation of the horse to Zakouma.’ Potgieter says Andrine is a fiery horse and, as is common to this breed, he’s resilient and copes well in the tough work conditions.

It is rare for horses to be used in anti-poaching roles. Among other small programs in Africa, horseback patrols are conducted on the slopes of Mount Kenya; Bale Mountain National Park in Ethiopia and Kruger National Park in South Africa. Horses are currently being introduced to another African Parks managed area, the Bangweulu Wetlands of Zambia where, like Zakouma, vast areas are inundated with water. But horses are more commonly used as a way for guests to experience the wild in a thrilling, more natural way.

The expense of the intensive care that horses need and the training of specialist rangers makes using horses in anti-poaching roles prohibitive – unless the area is virtually inaccessible by other means, and the local community are horsemen themselves. In Zakouma, horses have proven remarkably effective, but elsewhere technology has meant we have long since dismounted and left the horse behind. Yet much of that technology has proven ineffective against poaching.
The ranger on horseback can cover far more distance in a far shorter time than a ranger on foot. On a horse, he can manoeuvre through or over obstacles that would stop a vehicle. On a horse, he is a formidable and intimidating presence. One wonders if the expense might be worth using more horses and training more riders as part of a wider anti-poaching strategy. Perhaps it’s time we mounted up against poaching.

Read more about Zakouma National Park in our magazine article Beyond the Infinity Pool.