Photographer Jim Naughten first came across the Herero tribe when he visited Namibia fifteen years ago. He fell in love with the country and its extraordinary inhabitants, and was particularly spellbound the first time that he saw a Herero lady sashaying across the desert outside Swakopmund in her beautiful dress.
What interested him, in particular, was the history behind the dresses and how things can get frozen in time. Their antiquated clothing was introduced by the German settlers and has since become a vital part of Herero identity, despite a dreadful war waged by the colonisers that resulted in the death of 80% of the Herero tribe.
Jim sees the dresses and Herero costume as important symbols of defiance, survival and cultural identity. In this photoshoot, he was lucky enough to work with a Herero tour guide company, which backed the financing for the project. All the people photographed also received fees, and the crew brought supplies, such as maize, coffee, and sugar to the villages where they stayed.
Jim had the chance to get to know the people and their culture very well during his three-and-a-half-month stay in their villages, and the response to his work from the Herero community has been very positive.
In the above photo, two women from the Otjigrine section of the Otruppe march alongside women from a different group in military dresses that are worn at ceremonies such as Herero Day to commemorate Herero chiefs of the past. 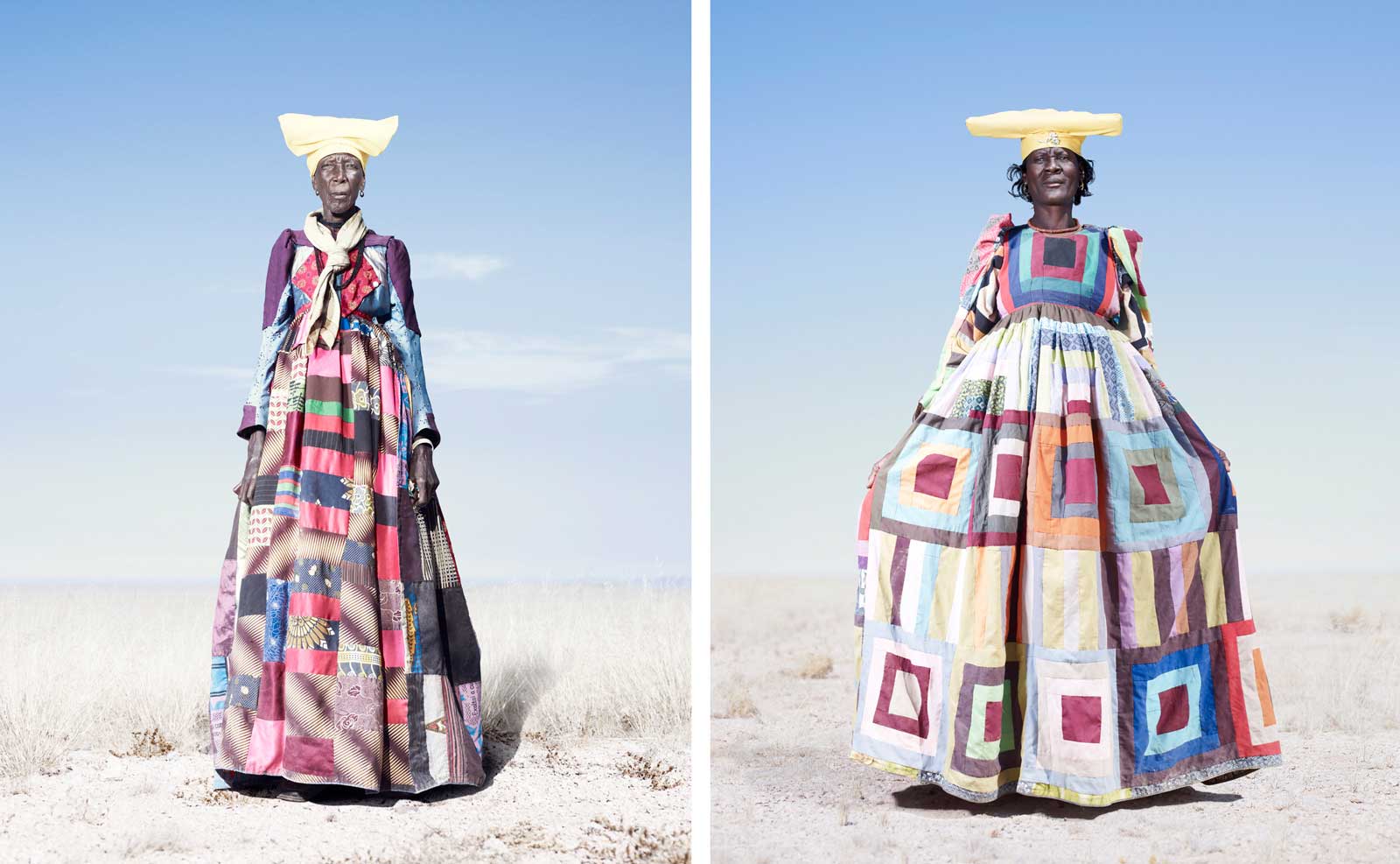 ? Two Herero women display their traditional patchwork dresses. Their hats are designed to resemble cow horns, and the ‘horns’ of their headdresses get smaller as they get older. Some say that this a symbol of their decreasing fertility. 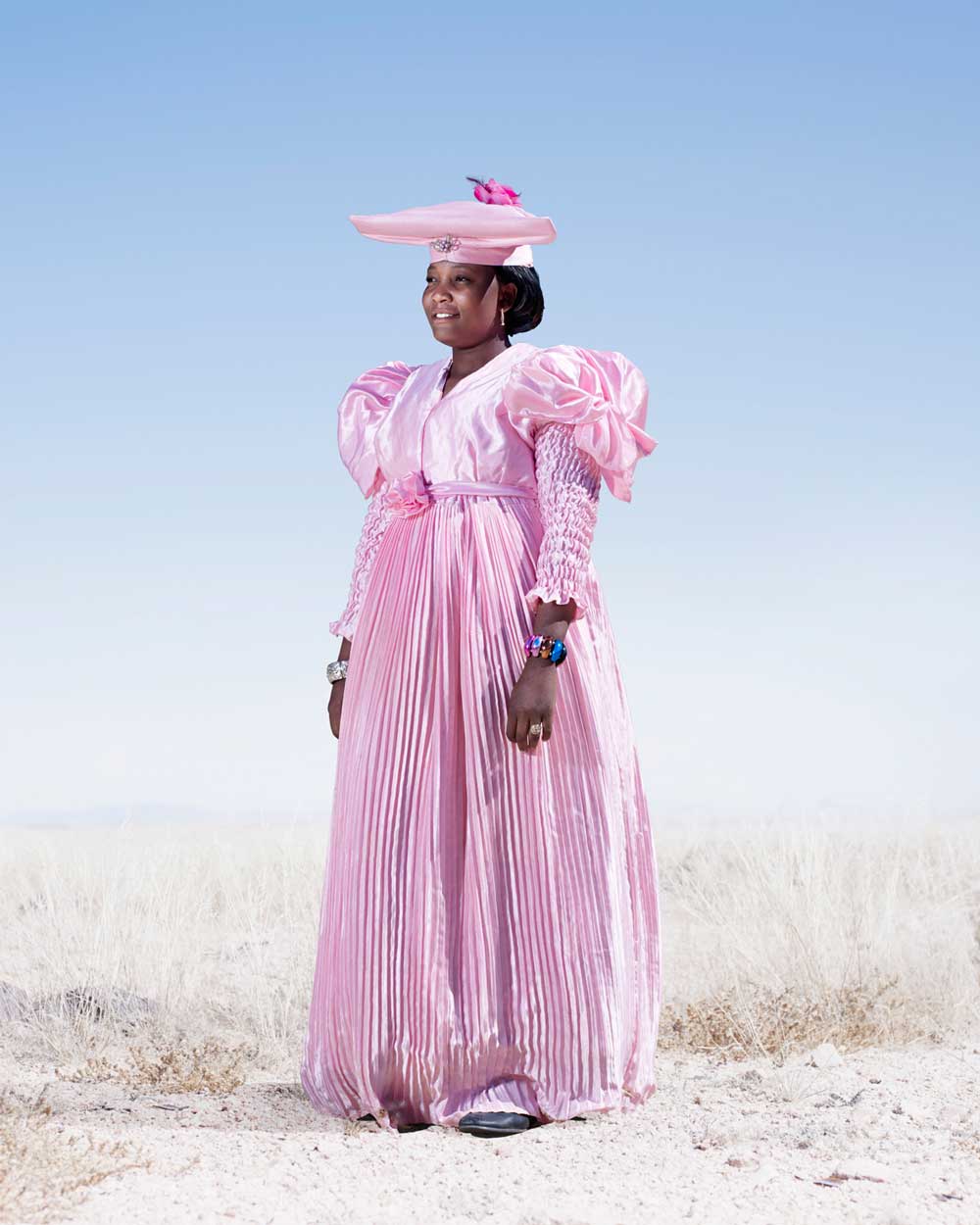 ? The tradition of wearing floor-length formal attire started in the late 19th century when Christian missionary women sought to convert the tribe and clothe them in the European fashion of the times. The Herero women tend to wear these traditional dresses from their wedding day onwards 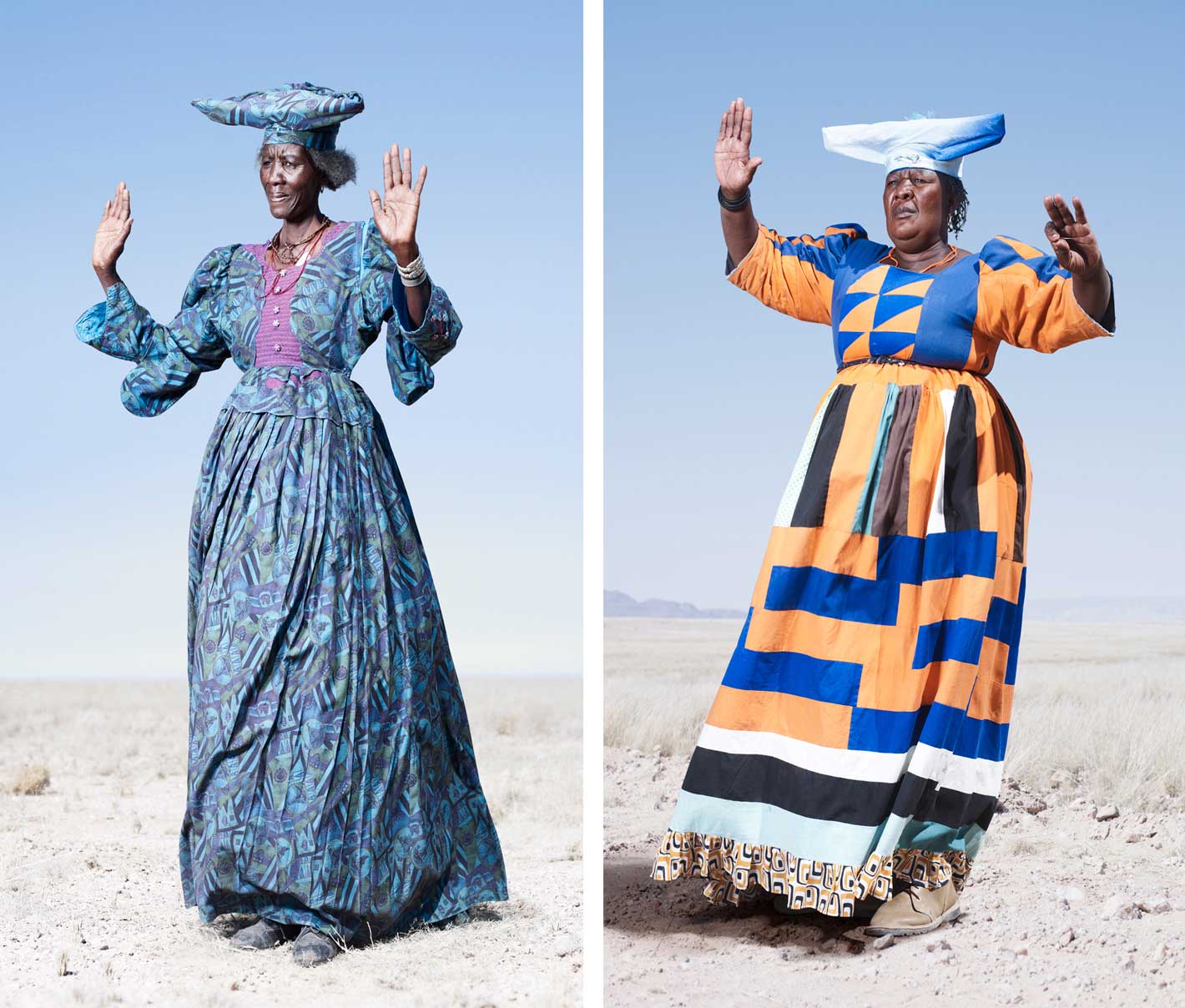 ? Herero women assume the cow dance pose; a celebration dance during which participants stamp their feet and kick up dust to imitate the upraised horns and swaying movements of the cattle that they rear. 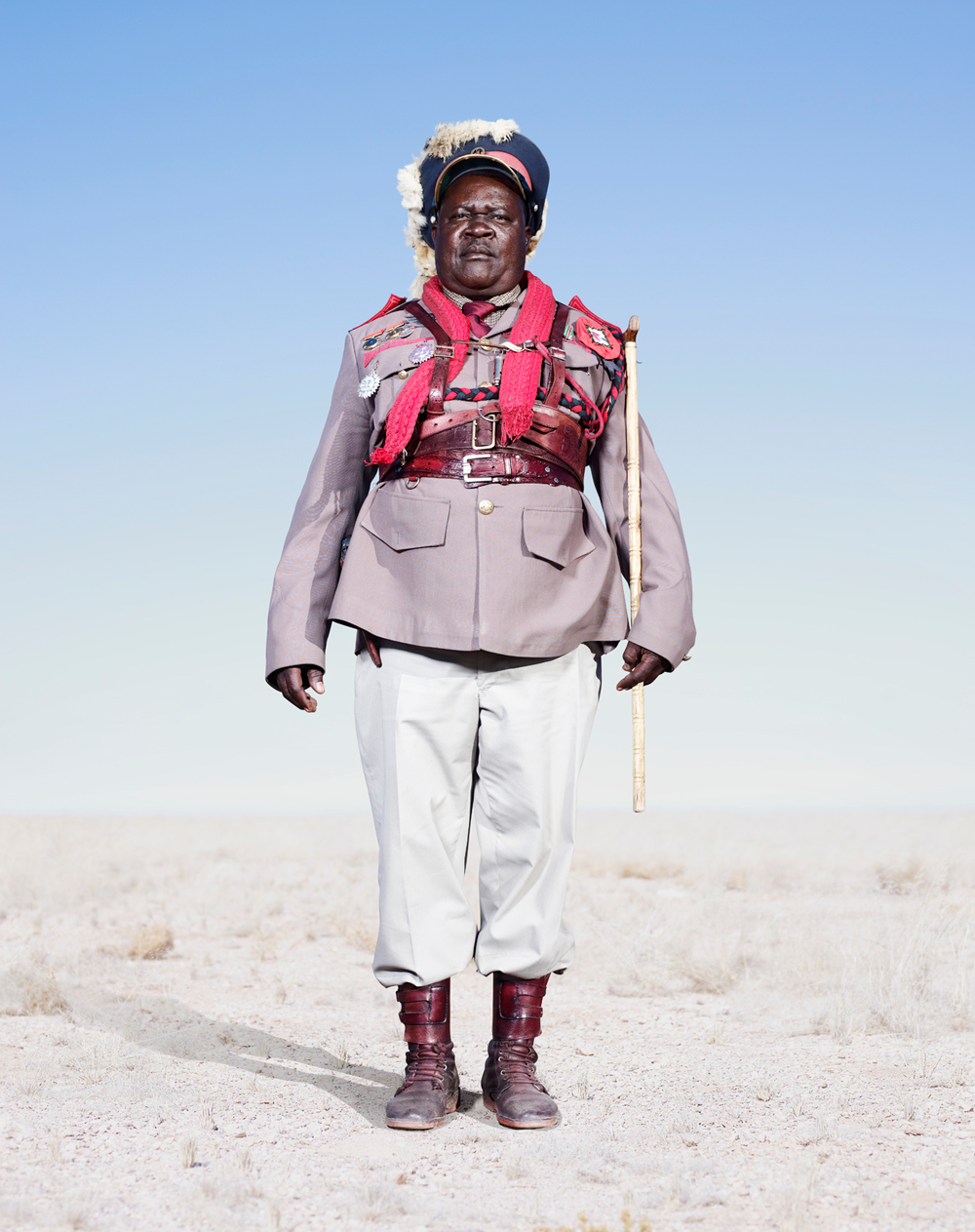 ? The men of the Herero tribe, in contrast to the women, do not dress up as Victorian gentlemen but rather as soldiers. Their choice of attire serves as a permanent reminder of when the tribe came close to being exterminated by German colonisers. By mimicking the style conventions of their oppressors, they diminish the enemy’s power. 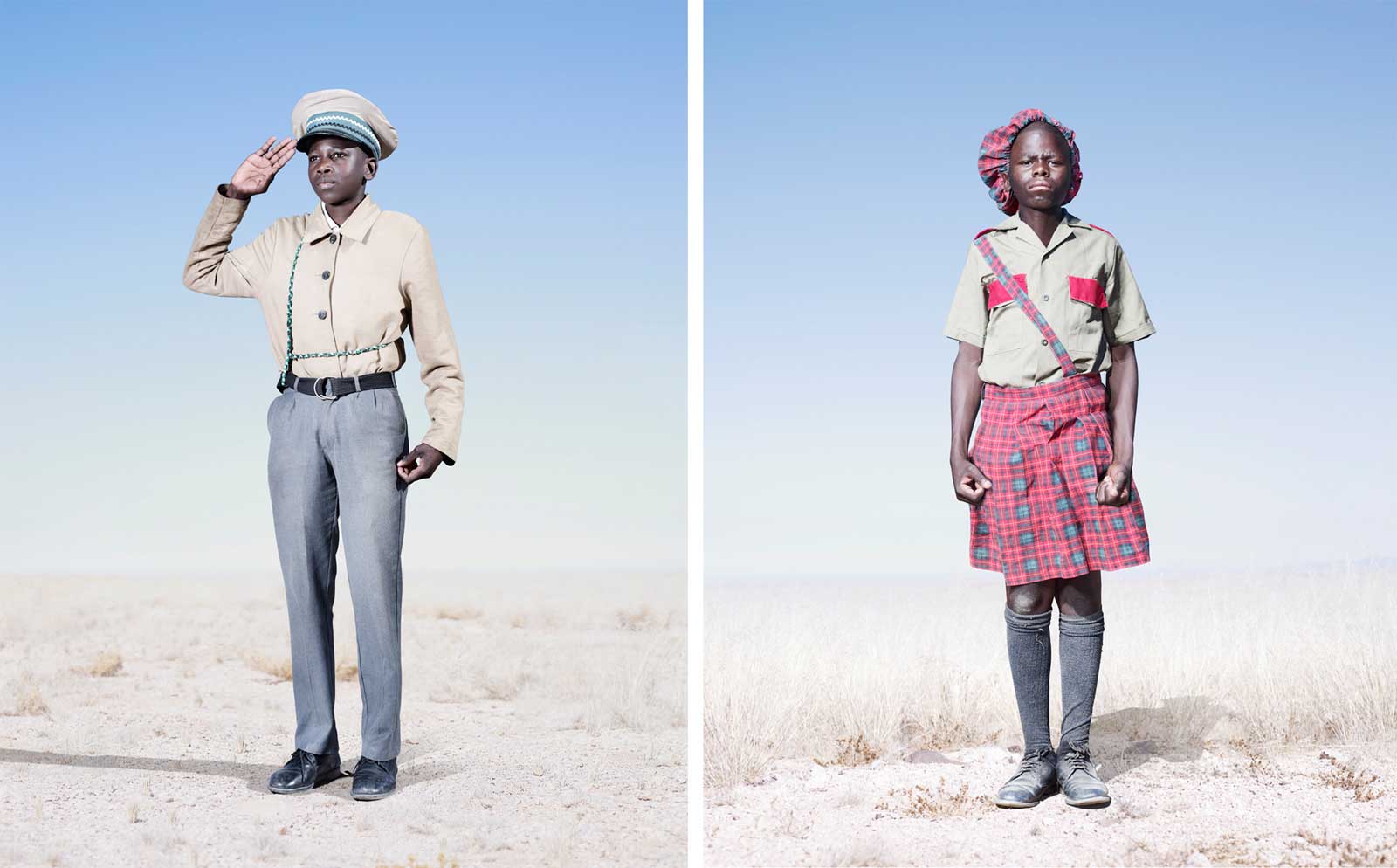 ? These uniforms demonstrate a form of social structure more than a present-day military movement, and male members of the tribe tend to mainly wear these outfits at ceremonies and festivals. 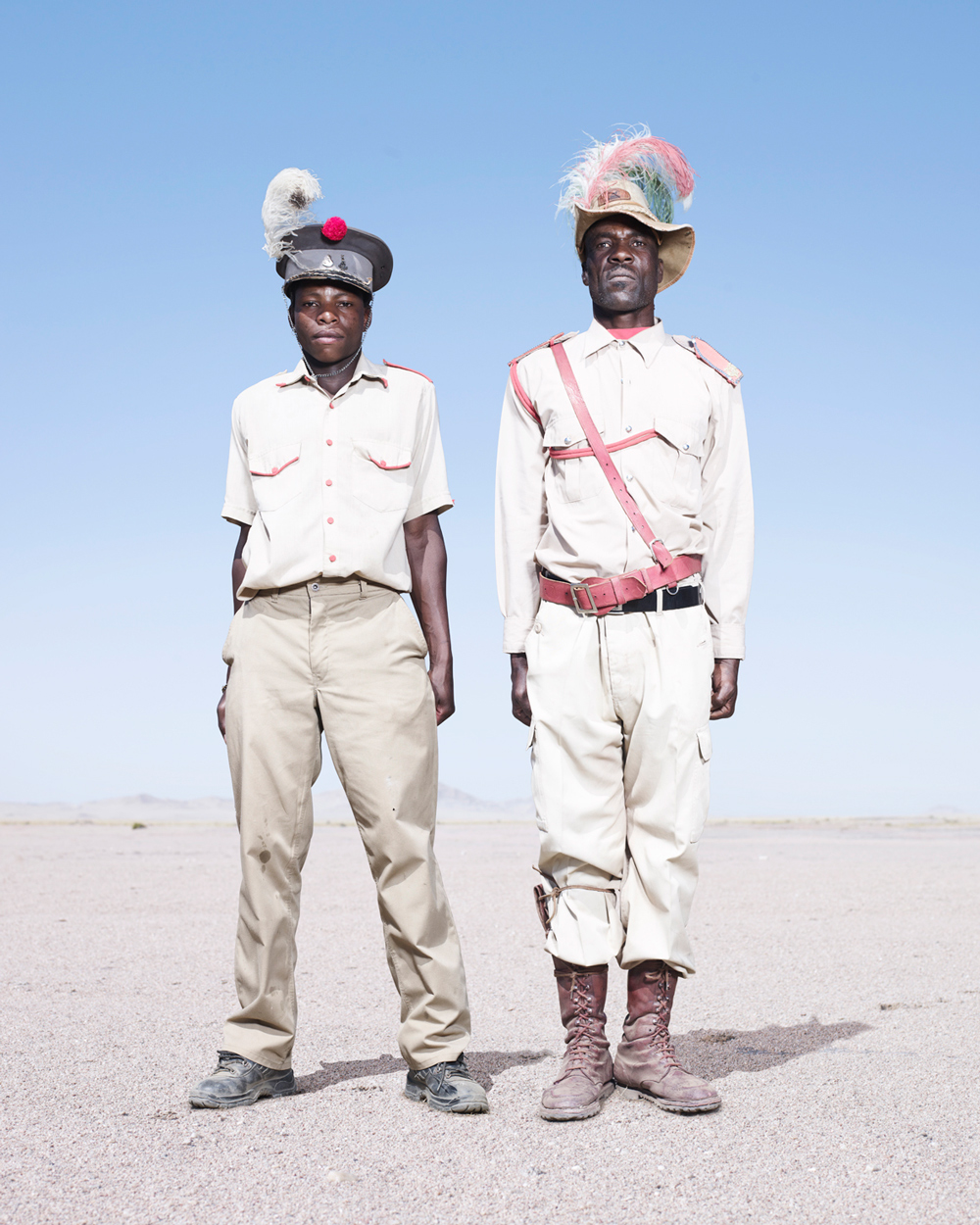 ? During the war that ended in 1908, Herero men would take pride in wearing the uniforms of German soldiers that they had killed. To this day, the Herero people continue to wear the uniforms of their European oppressors to honour their warrior ancestors.

? The cavalry struts by 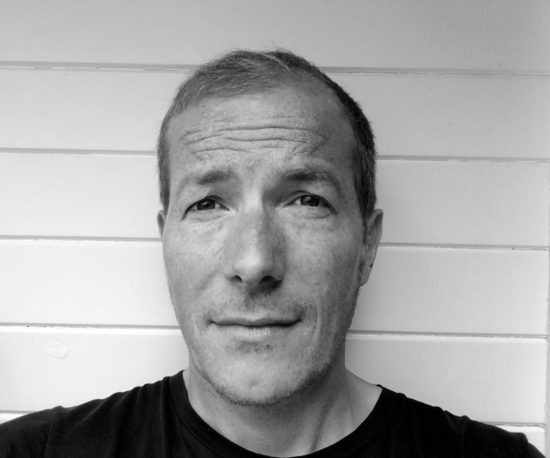 Jim Naughten is a photographic artist currently exploring themes with historical subject matter. He was awarded a painting scholarship to Lancing College and later studied photography at the Arts Institute of Bournemouth in the UK.
Naughten’s work has been widely featured in exhibitions across Europe and the US and includes a solo show at the Imperial War Museum as well as group shows at the Royal Academy of Art and National Portrait Galleries in London.
His first series, Re-enactors, was published as a monograph in 2009 by Hotshoe Books. His second, Hereros, was published by Merrell in March 2013, and his new book Animal Kingdom will be published by Prestel in April 2016.
Collections of his work are held at The Imperial War Museum, The Museum of Fine Arts in Houston, Honolulu Museum of Art, and many private collections in the US, UK and Europe.