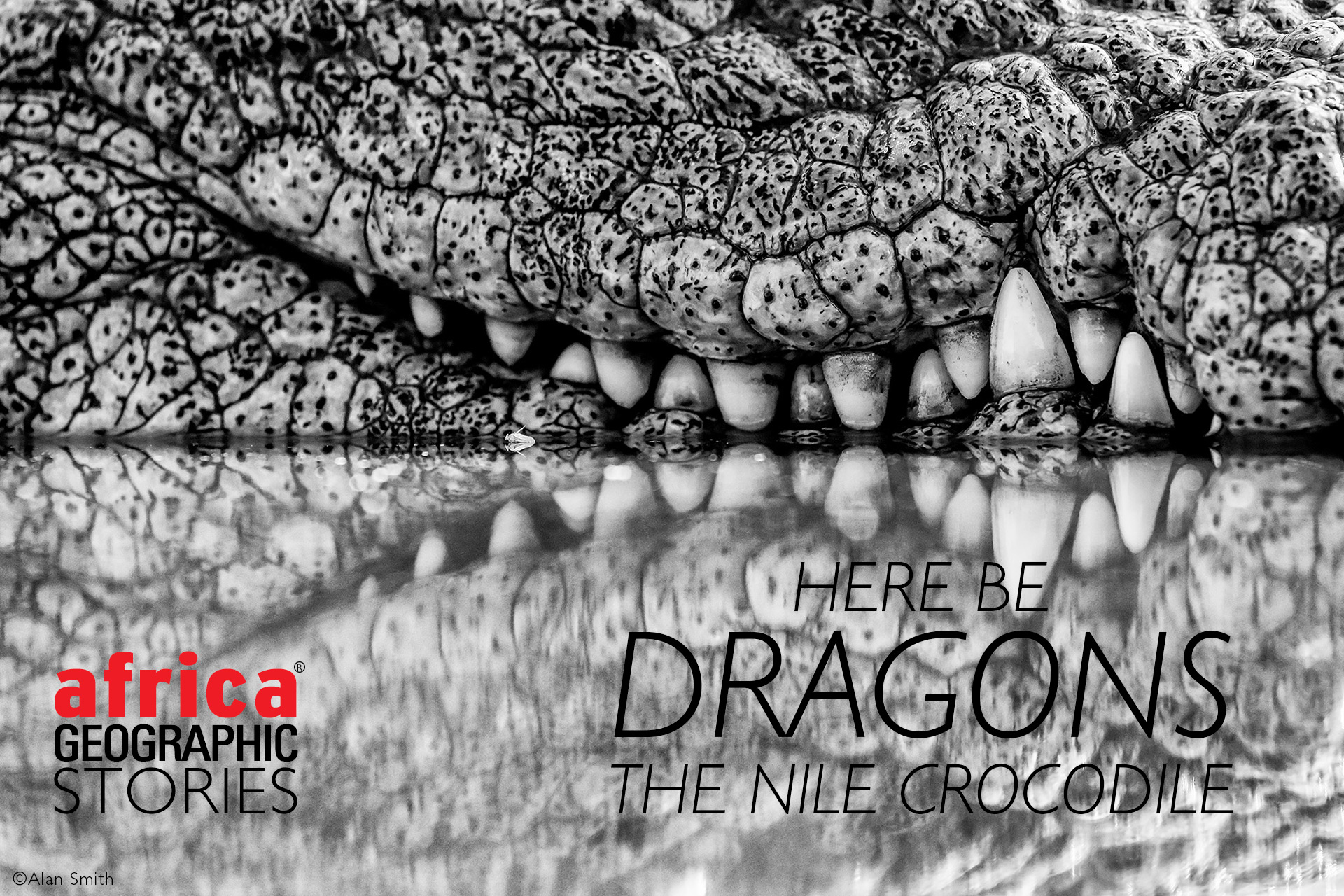 HERE BE DRAGONS - The Nile crocodile

When watching any animal in Africa smaller than a rhino approach the water’s edge, there is an almost palpable sense of terror to their body language. Slender limbed antelope skitter backwards and forwards before barely touching the surface with their lips, zebra snort and startle and even the ferocious lions snarl pre-emptively before quenching their thirst. Wildebeest driven to cross East Africa’s mighty rivers pile up on the banks, worked up into a frenzy of fear, too afraid to be the first to make the plunge. And for good reason. Crocodile!

Beneath the murky waters of Africa’s rivers and dams lurk prehistoric predators – lumbering giants whose presence is revealed only by an insidious ripple, waiting to explode in a fury of teeth and water. The wild animals of Africa know this. Stamped across their internal maps over every water source is the message: here be dragons. 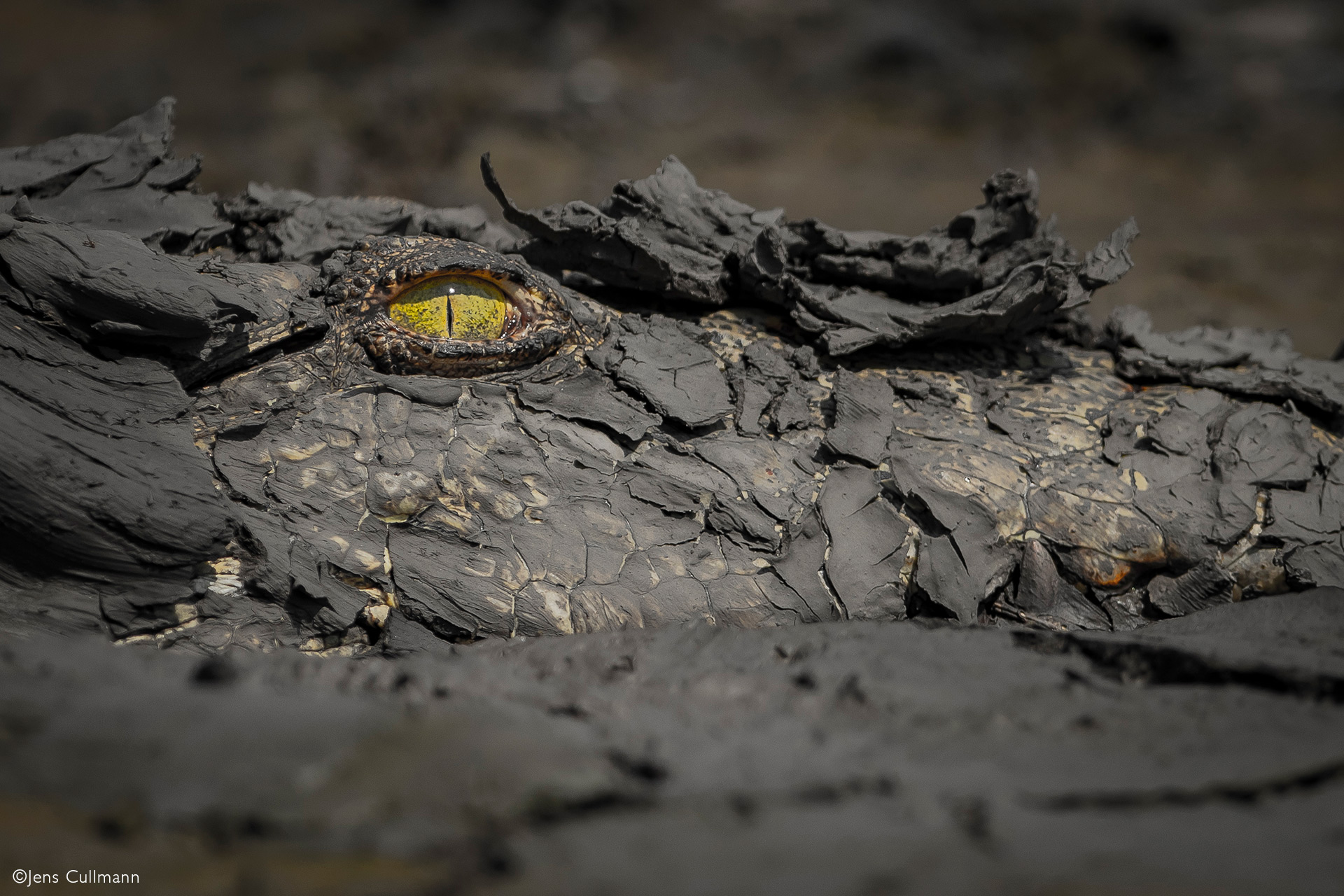 Neither dragons nor dinosaurs, crocodiles are the paradigm of an evolutionary recipe that proved successful – little about them has changed in the last 100 or so million years. They are perfectly designed apex predators with potentially massive bodies powered by robust muscles, covered in armoured scales and driven by clinical, calculating instinct. Crocodilians are also the ultimate masters of the ambush approach, drawing on their innate reptilian capacity for absolute stillness until launching an assault.

Of the five recognised crocodile species in Africa, the Nile crocodile (Crocodylus niloticus) is by far the most common and one of the largest crocodilian species in the world, second only in size to the saltwater crocodiles of Asia, Micronesia, and Australia. They have a life expectancy of up to 80 years and range in size from 30cm hatchlings to adults weighing over 500kg, with the largest ever recorded individual measuring 6.45m from snout to tail and weighing 1,089kg. Somewhat unexpectedly, they are more closely related to birds than they are to other reptiles. 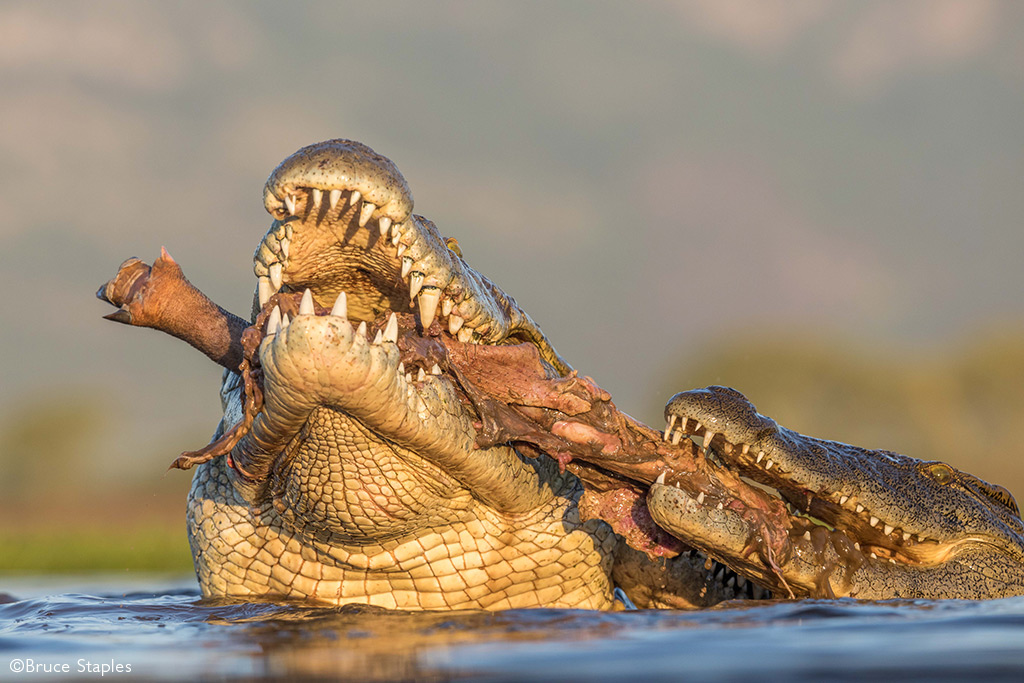 It is common to hear crocodiles described as “living fossils”, but this is not entirely accurate. Their ancestors successfully survived a mass extinction event around 250 million years ago. From there, the surviving evolutionary line branched into the Archosaurs (“the ruling lizards”) – with one earlier branch leading to the crocodilians and the other later branch leading to the dinosaurs (and, ultimately, birds). Unlike their dinosaur cousins, however, the crocodilian ancestors were destined to survive another mass extinction event at the end of the Cretaceous.

Fossils of these crocodilian ancestors indicate a far greater variety in terms of size, shape, and hunting styles than seen today. Some were terrestrial and predatory and bounded across land to chase down their prey, whilst others were predominantly herbivorous or omnivorous. For those that took to the water, all weight restrictions lifted and, for a time, mega-crocs the sizes of buses haunted the oceans and deep rivers of early Earth. From the Late Cretaceous and with the extinction of the dinosaurs, through ice ages, and the subsequent rise of the mammals, the surviving crocodilians have barely altered. 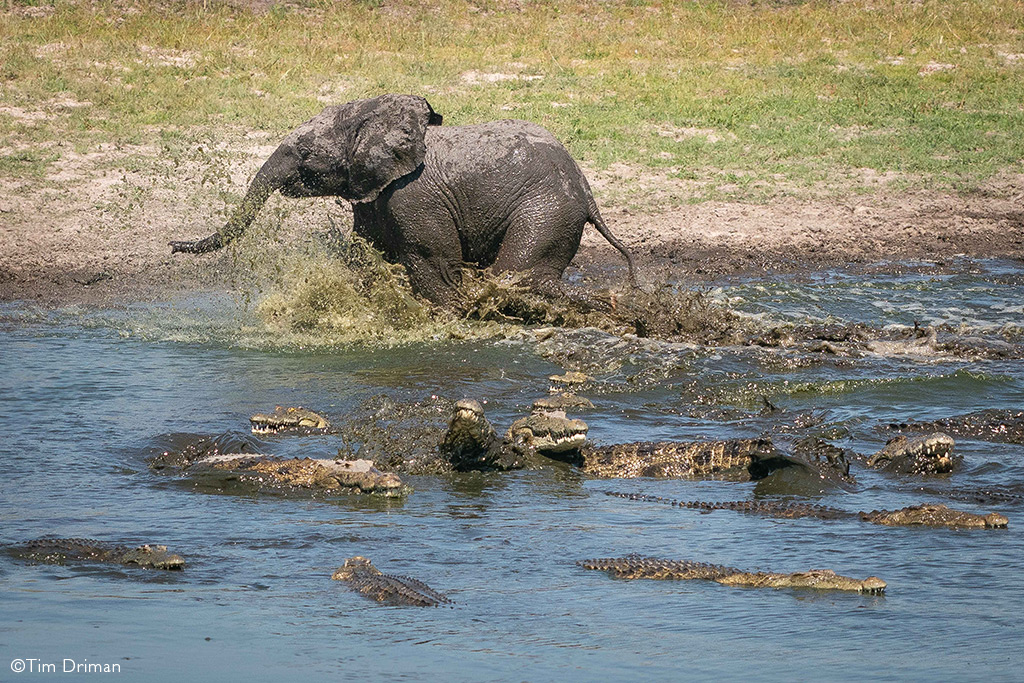 The lack of evolutionary action can be at least partly explained by a successful foundation for exceptional hunting abilities. While younger Nile crocodiles are primarily reliant on regular meals of invertebrates, amphibians, and fish, those that survive to adulthood will attain the status of apex predator, capable of ambushing large prey twice their size including buffalo, giraffe, humans and even young elephants.

Unique among reptiles, crocodiles have a four-chambered heart, improving the efficiency of the transportation of oxygenated blood around the body which, combined with extremely high lactic acid levels, allows them to stay submerged for up to 2 hours at a time (provided they remain inactive underwater). Specialised muscles attached to the lungs, liver and pelvis can contract to pull the lungs backwards into the body cavity, changing the crocodile’s buoyancy and allowing it to submerge without creating ripples and alerting potential prey to their presence.

It is relatively well-known that Nile crocodiles have one of the strongest bite forces in the animal kingdom – some 30 times that of a human at 5,000 pounds per square inch. This is powered by enormous muscles that attach behind the skull and wrap around the lower jaw, allowing the jaw to close (and stay closed) with tremendous strength whilst still maintaining a low profile in the water. There are between 64-68 basic and cone-like teeth rigidly fixed into the jaw, designed to withstand considerable force from every direction. These may be replaced throughout the crocodile’s life. When a crocodile pulls its prey into the water, these teeth maintain a grip as the crocodile goes into a “death roll”, using its powerful tail to spin the prey underwater until it drowns. 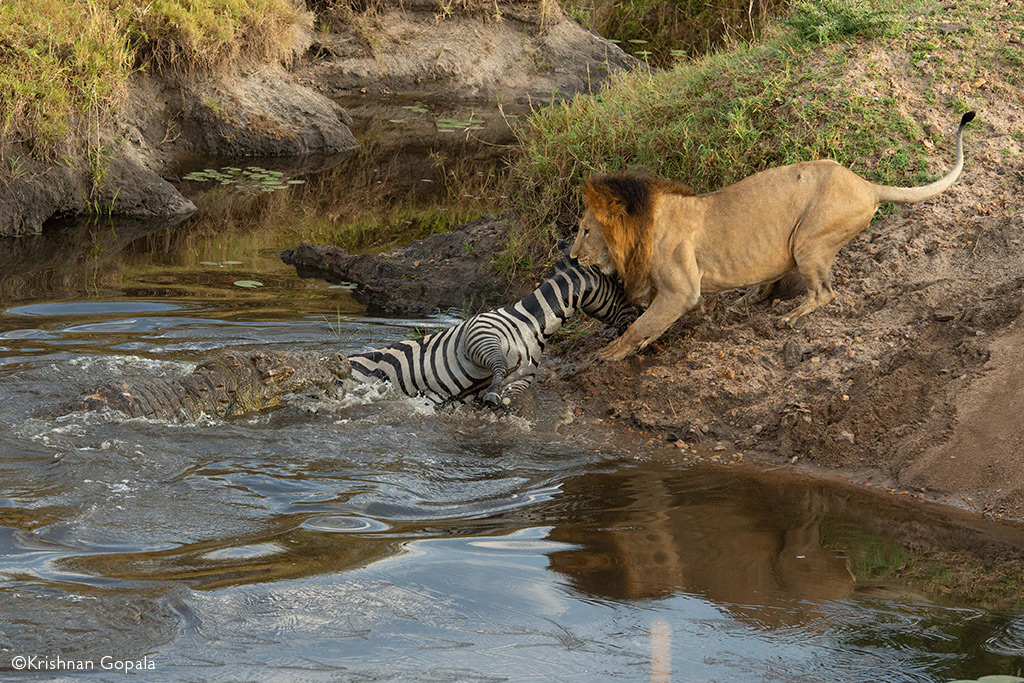 Unspecialised teeth mean that crocodiles cannot chew or bite off chunks of meat so, for larger meals, they tear chunks of flesh away before swallowing them whole, hooves, horns and bones included. Their tracheas are reinforced to avoid being crushed when swallowing large portions of food and their stomachs distend in every direction to accommodate awkwardly shaped meals. To complete the process, crocodilians produce stomach acid some ten times the strength of a human’s gastric acid.

Like all reptiles, they are ectotherms, meaning that their metabolisms are slow and large crocodiles can survive for months without a meal. 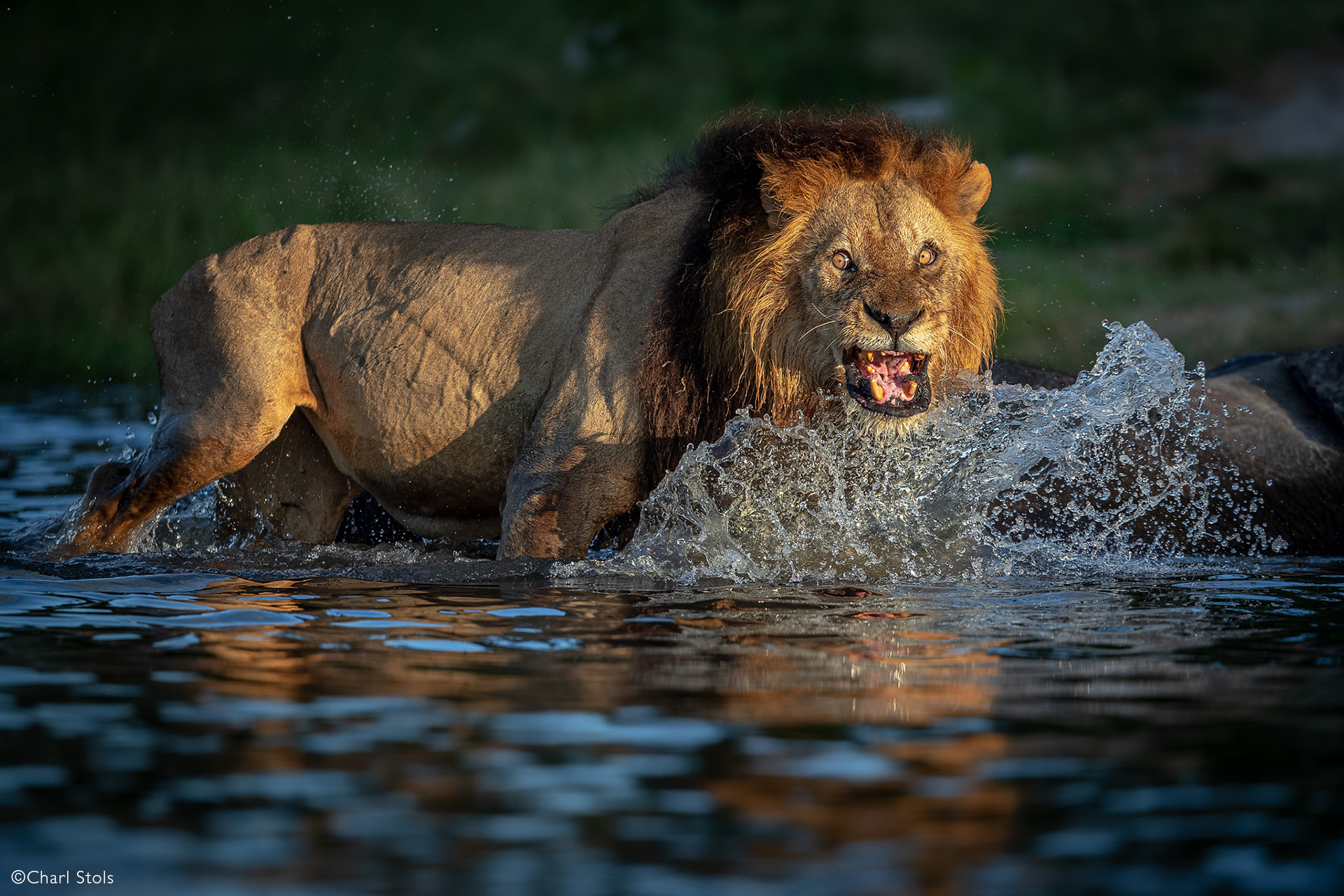 While their approach to hunting is silent and deadly, crocodiles are surprisingly vocal animals and never more so than during the breeding season (the timing of which varies depending on the area). Males show off by “roaring”, slapping their snouts on the water and exhaling sharply, intimidating rivals, and attracting females.

Two months after mating, the female selects a suitable nesting site on the shore or in a dry riverbed and digs a hole in which to lay her eggs. The clutch size will vary depending on the size of the female but is usually between 25-80 eggs. Unlike other crocodilian species, the female Nile crocodile does not use moribund vegetation to incubate the eggs so she will be selective in ensuring that the nest receives adequate sunlight to maintain the temperature. Like several other reptile species, crocodiles have temperature-dependent sex determination – if the temperature is between 31.7˚ and 34.5 ˚C, the offspring will hatch as males, anything above or below that range will hatch as females. 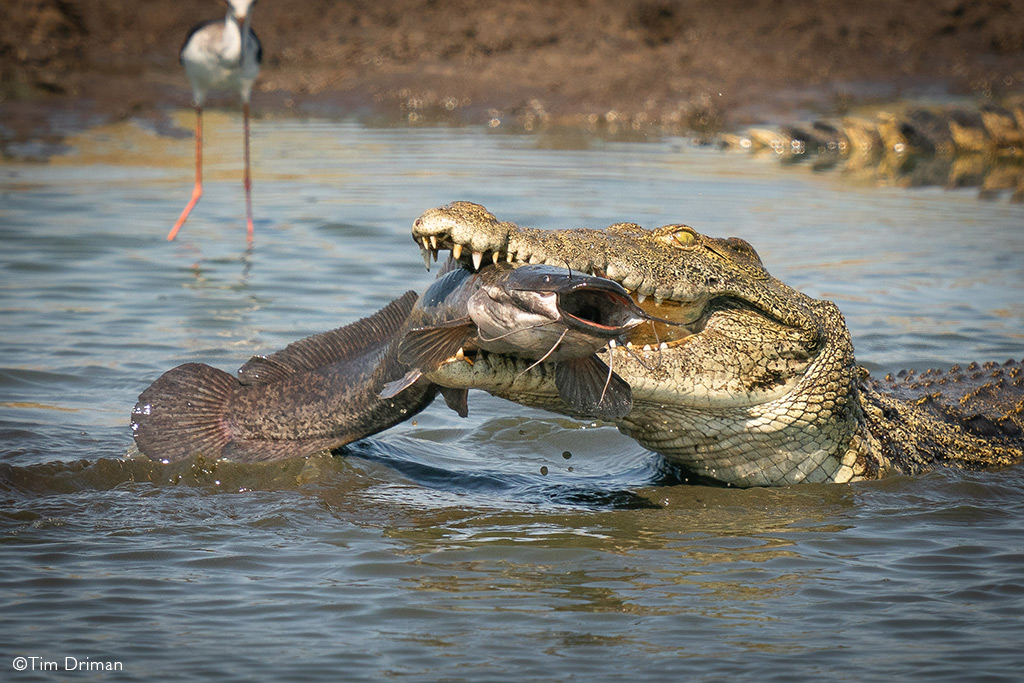 The mother guards her nest, often aggressively, for the three-month incubation period until the hatchlings begin to make bird-like chirps to indicate their readiness to escape the nest. The female then carefully digs open the nest and may even take the hatchlings in her mouth to water. For up to two years, she will stay close to them, defending them (though the hatchlings hunt for themselves immediately upon leaving the nest).

Despite the best efforts of the mothers, the mortality rate of hatchling Nile crocodiles is exceptionally high. Until they reach a comfortable size, baby crocodiles are faced with a multitude of potential predators: from monitor lizards to birds, and any number of opportunistic mammal species. In some areas, studies indicate that only 10% of the eggs survive to hatching, and just 1% of those will reach adulthood. 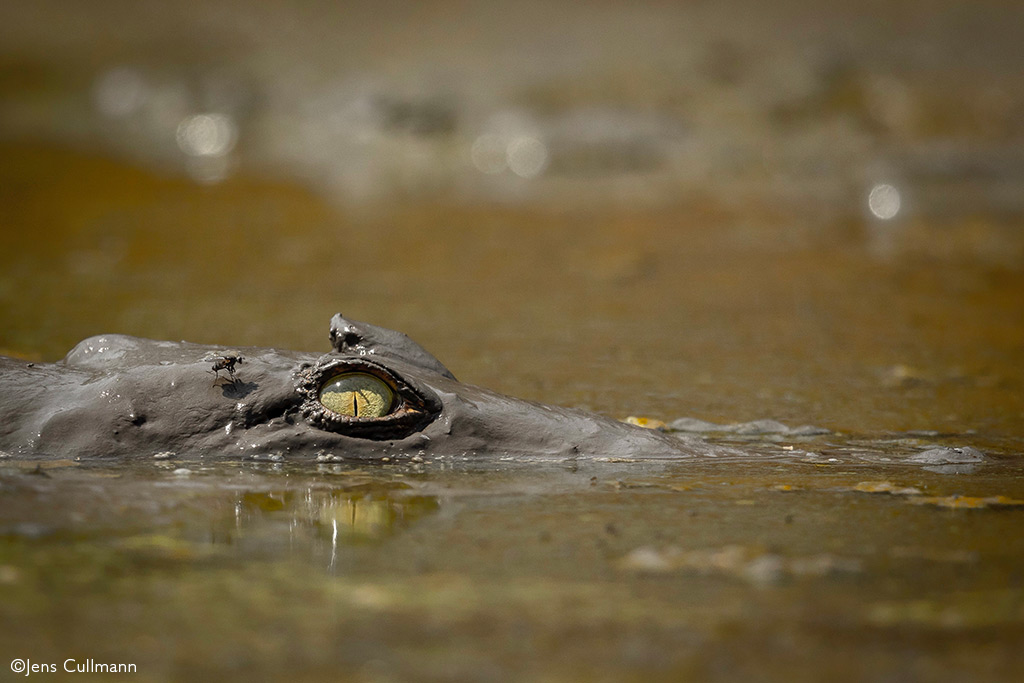 The young crocodiles approximately double their length during the first two years, spending almost as much of that time on land hunting invertebrates as they do in the water. However, as they grow, their hunting habits become almost entirely aquatic, and they become more dangerous to people.

According to the IUCN Crocodile Specialist Group, Nile crocodiles are responsible for more attacks on humans than any other species of crocodile, including saltwater crocodiles. This is easy to understand in context, given their massive size and widespread distribution throughout the various waterways of much of the African continent. In areas where human populations are reliant on this water for fishing, drinking, and bathing encounters with crocodiles are inevitable and, on most occasions, fatal. There are no reliable estimates as to the number of people killed by Nile crocodiles every year (in many circumstances, the victim simply disappears or the attack goes unreported). Still, experts estimate that the number of attacks on people exceeds 300 per year. According to the most recent research, 63% of these attacks are fatal. Almost all of these attacks occur near the edge of or in the water. 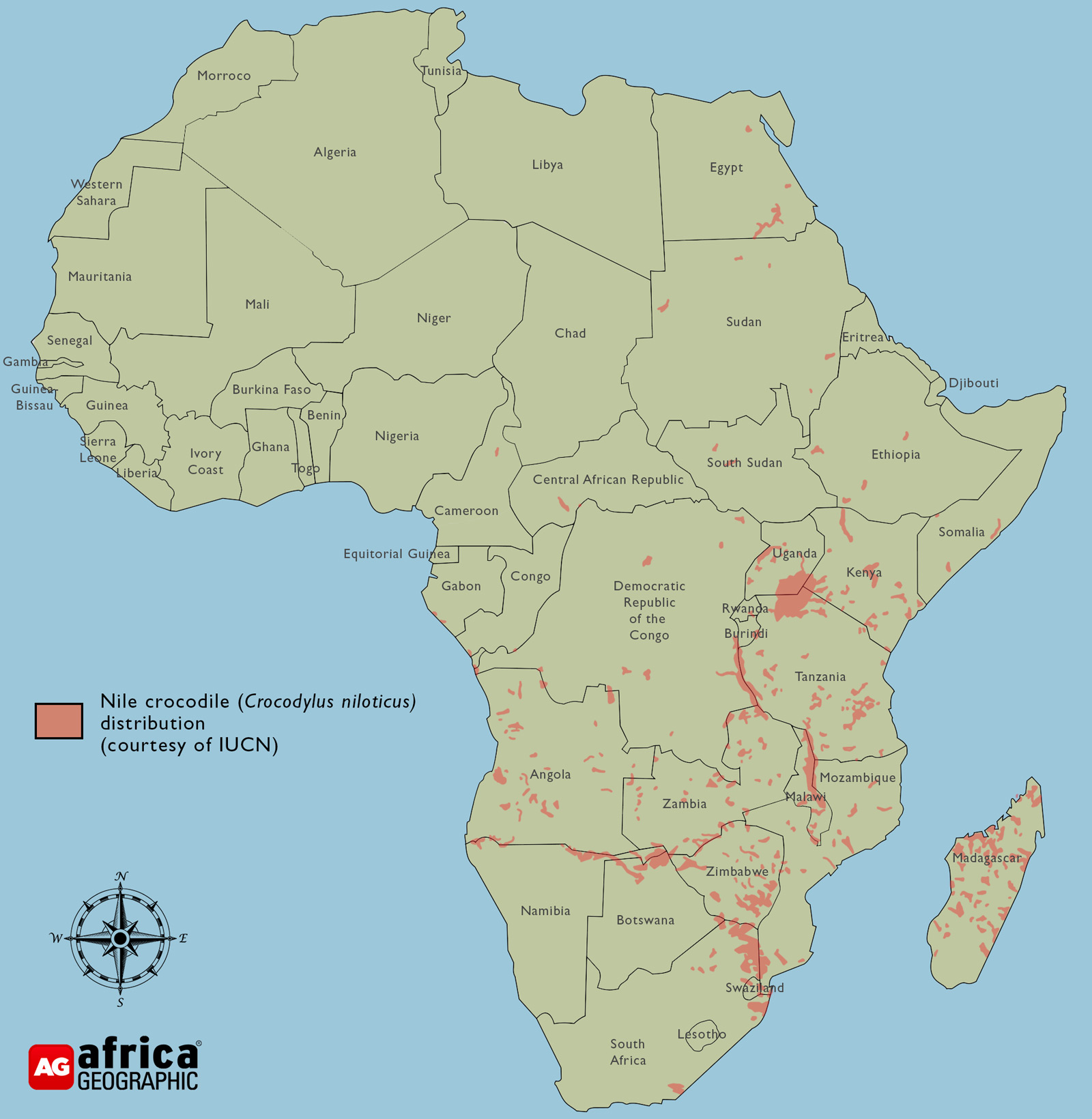 While their lives are water-dependent, large crocodiles may cover large distances in search of new territory or better resources. They may choose to occupy unlikely-looking wallows or dams in the process. When in doubt, throughout most of southern and East Africa, bodies of water should be treated with caution.

Naturally, this propensity for grabbing imprudent visitors to the water’s edge has not served to create a particularly positive reputation for the Nile crocodiles of Africa. This, combined with the use of their skins for high-quality leather, led to widespread persecution of the Nile crocodile across most of its natural range, particularly during the 20th century. Given their low survival rates and slow maturation, populations that have declined due to human impact are often slow to recover. However, with the increasing number of crocodile farms, the IUCN Red List currently classifies wild Nile crocodiles as being of “least concern”, with the most recent estimate putting their total number somewhere between 250,000 – 500,000.

This is not applicable across their entire range however, particularly in Central and West Africa, where their numbers are far less stable. In some areas, they have been eradicated entirely. Conflict with people, loss of suitable wetland habitats, bushmeat hunting and even entanglement in fishing nets are all potential threats to the future of the crocodile species in Africa. 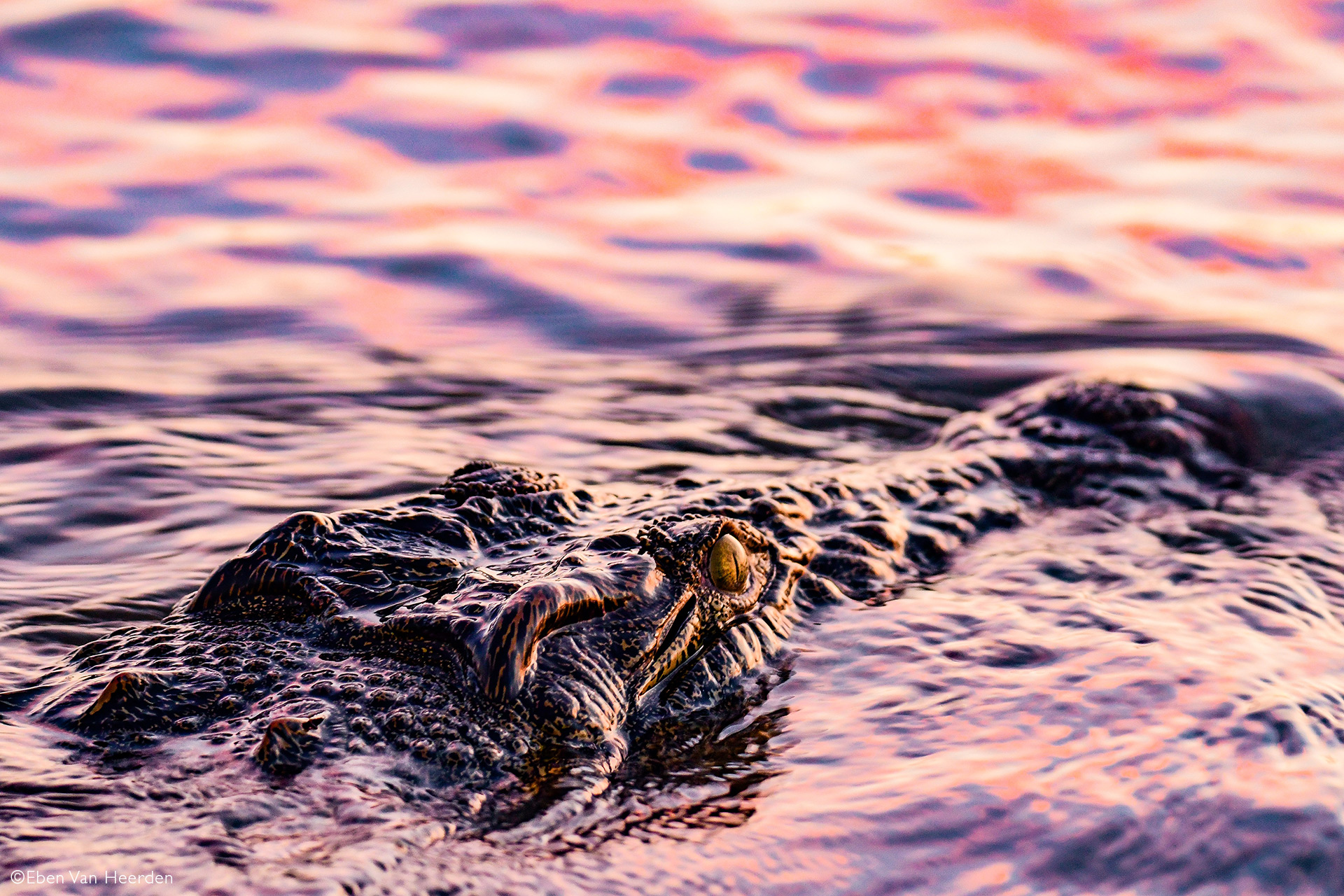 There can be no question that Nile crocodiles have acquired a particularly sinister reputation, despite the best efforts of certain conservation television and YouTube personalities. In many ways, they are difficult to sympathise with – powerful, self-contained, and entirely expressionless (with somewhat graphic table manners), they are a throwback to a time when reptiles ruled the planet. Yet while they may be prehistoric, that does not equate to primitive, and it is this ancient combination of brawn and stealth that has kept the Nile crocodile at the top of the food chain for millions of years.