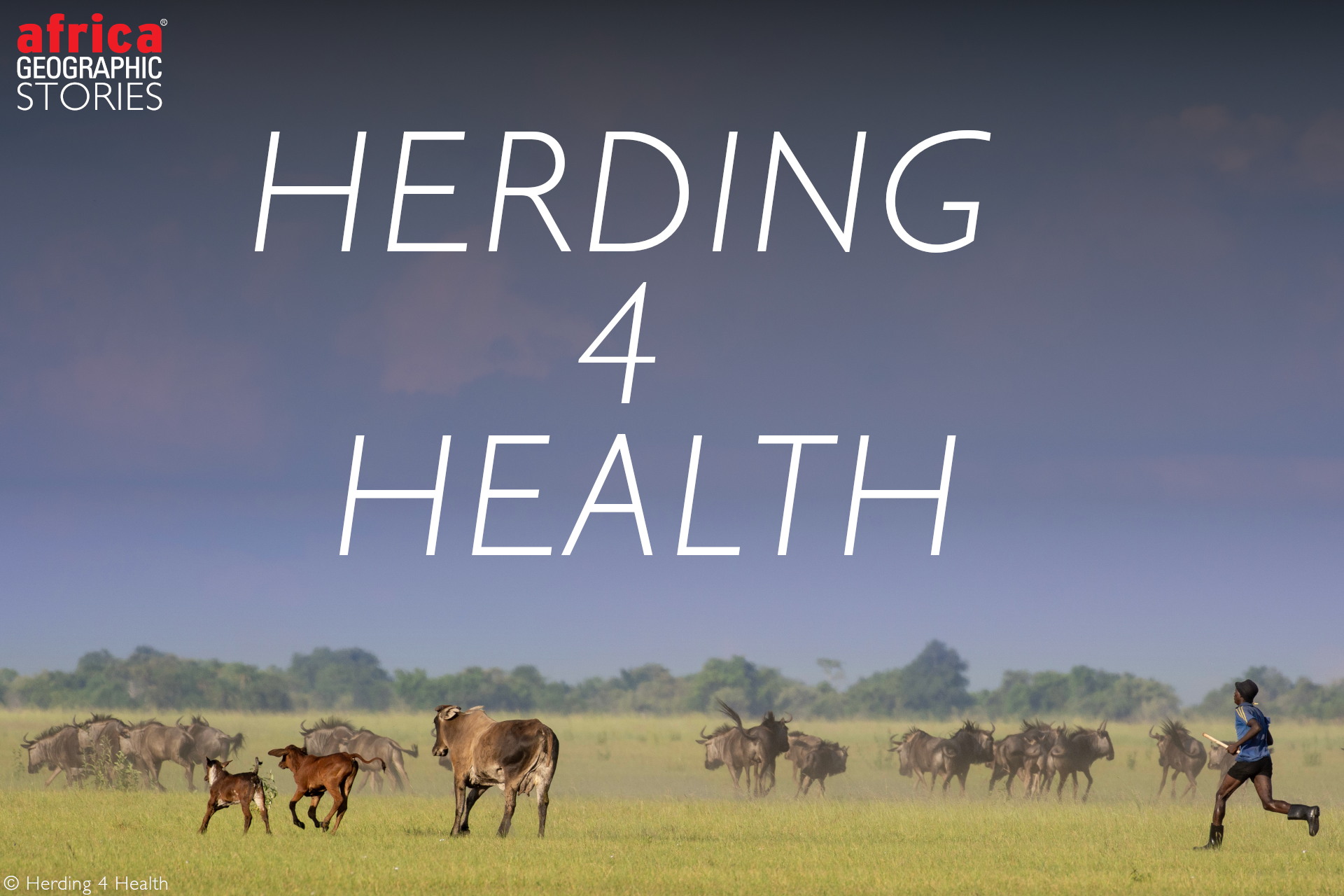 ‘Herding 4 Health is a community development activity that promotes conservation outcomes while supporting people living in rural areas to find their way out of extreme poverty. It does this by teaching community members to make use of what they already have – cattle and other livestock.’ Peace Parks Foundation.

Livestock herding and wildlife conservation are often seen as anathema to each other. A combined Peace Parks and Conservation International initiative called Herding 4 Health (H4H) is changing these perceptions while improving livestock health and wealth for local people living on the fringes of protected areas. The programme is also restoring rangelands and increasing biodiversity.

In many parts of Africa, livestock animals are massively important to rural people. They provide milk, meat and a form of banking for people living on the borders of protected areas. Yet increasing numbers of livestock, grazing without coordination close to villages has caused extensive rangeland degradation which, in turn, has resulted in poor livestock health, decreased food security, and increased poverty.

Another problem community livestock owners face is access to markets for those who want to sell their animals. Livestock is generally in poor condition and live animals cannot be sold across veterinary cordons. Foot and Mouth disease is a major problem around many Southern African protected areas. The disease is carried by free-ranging buffalo, and cloven-hooved livestock are extremely susceptible to it.

Many of the problems can be put down to herds not being managed optimally. Historically, herds would have been looked after all day – drop and go herding did not happen. These days, kids go to school and modern life makes it very difficult for herds to be monitored full time, especially in areas that are not fenced (a situation that brings its own set of problems). As Mike Grover, Project Manager of the H4H programme in the Mnisi Tribal Authority (Mnisi TA) on the borders of the greater Kruger National Park says, ‘Livestock are not a problem. Unmanaged livestock are a problem.’

Jacques van Rooyen, Director of the Herding 4 Health Programme who developed the H4H model grew up on a cattle farm where he developed a love for nature. He went on to study animal science, rangeland science and then wildlife management before helping to plan and set up game reserves in various parts of Southern Africa. His experience and work in veterinary science drew him into the people and protected areas interface where he felt there were a lot of specialists doing good work in human-wildlife conflict, rangelands, animal health and production, ecology and tourism. Few, however, were taking an integrated, systems view of the complicated situation.

Van Rooyen realised the problems on the borders of protected areas were based on rangelands, community politics, land use clashes (conservation versus farmers), development, disease control and market access. In other words, he realised the need for a delicate balance between ecological and social priorities. He also saw, however, that these complex problems needed a simple, community-driven solution that could be modified for local conditions and priorities.

Herding 4 Health uses skills already in the communities – herding and kraaling predominantly – and the introduction of new technology. It enables regenerative livestock production and enhances social equity through training and enterprise development.

One of the key features of the Herding 4 Health solution is the eco-rangers. These are people selected by their communities to be the custodians of the H4H programme at the local level. The eco-rangers are taught professionalised herding techniques. They learn planned grazing, animal production, primary animal care, tracking, security and various applicable administrative skills. This is facilitated by the SA College for Tourism’s Herding Academy in Graaff-Reinet and the Southern African Wildlife College. The eco-rangers are streamed according to their strengths – e.g. digital reporting, communication, vegetation surveys etc.

H4H eco-rangers are not just cattle herders  – they are communicators, record keepers, trackers, cattle health assessors and vegetation surveyors. After four or five years, a herder can become an eco-trainer.

A good example is Cliff Nkuna of the Mnisi Tribal Authority near the Kruger National Park. Cliff wanted to be a field guide because that was how he saw himself making the best living. Now, however, with the training and experience he has from H4H, he is on a career path that allows him to stay in his village, make a living, and contribute to the long-term well-being of his community. He is an eco-trainer.

Through the eco-rangers, community livestock owners have a sustainable, traceable supply of animals to the grass-fed red meat market. This is hugely important as farmers in communal areas currently only supply 5% of the South African red meat market despite owning 47% of the livestock.

Limpopo National Park (LNP) is part of the Great Limpopo Transfrontier Conservation Area (GLTFCA). The Herding 4 Health programme in LNP, consists of six communities with 12,000 cattle in an area of 150,000ha. Two of the communities are in the park and the other four in the buffer zone. Before H4H arrived, the cattle were moving 20 km from the village before they reached the first grass – every day! The herders were also losing up to 20 animals a month to predators. Since the advent of H4H in the area, the cattle do not return to the villages during the summer months and not one animal has been lost to predators.

For rangelands, the ecological plan is based on science and best practice, where community livestock are grazed together in large herds in a coordinated manner such that their effects on the rangeland are positive and restorative.

In essence, this is how the programme works.

The first eco-rangers in this area were trained in January 2020 and the community mobilised another 100 volunteers. H4H provided rations for all. The government is supportive of the programme because it makes their job easier. Extension officers don’t have to work nearly as hard to have cattle treated for disease or dipped because the animals arrive for treatment in collective herds. Diseases are more easily contained and treated.

We spoke to Mike Grover, Conservation South Africa Landscape Director of the Herding 4 Health programme in the Mnisi Tribal Authority (Mnisi TA) on the borders of the greater Kruger National Park. In this area of South Africa, the same conditions that prevail in the LNP of Mozambique, do not exist. The H4H model, however, is designed to be flexible and work with local knowledge and local conditions.

Of the national cattle herd – i.e. all the cattle in South Africa, only about five per cent are available to the formal meat and dairy markets. The reasons for this include veterinary cordons and poor animal condition (because of poor grazing and untreated diseases). In the Mnisi region, the major issues are:

The lack of continuous herding results in poor disease reporting and monitoring, which in turn means that overall herd health is reduced.

Another significant challenge is building trust. H4H has been working with the Mnisi TA for eight years now. The programme began with the construction of an IT centre and a bush thinning initiative – relatively easy interventions. The processes involved in the H4H programme are natural but complicated and it takes a great deal of input to change people’s perceptions around managing livestock.

As mentioned, the problems, and therefore the solutions that apply to the LNP do not apply to the Mnisi TA. In the LNP, the major objectives are improved rangeland, intensive herding and the reduction of human-wildlife conflict. In the Mnisi TA, the high-density herding practised in LNP would be almost impossible to achieve because of the fencing already in place.

Herding 4 Health is not a cookie-cutter system and it is not just about herding. It is about optimising agricultural practices for the area in question to the benefit of rural farmers, their animals and communal rangelands. The programme aims to create resilience through adaptability, collective bargaining and saving money.

H4H in the Mnisi area, therefore, aims to bolster and capacitate agricultural structures so that cattle owners are better able to keep records on their animals and maintain good herd health. H4H also hopes to improve access to market for beef cattle owners.

The Mnisi area is not as remote as some H4H target zones and it is intensively researched by tertiary organisations. It is therefore a great testing ground for H4H concepts. One of these is the mobile abattoir – which is an abattoir that travels through rural areas negating the need for cattle owners to transport their animals to slaughter. It conforms to all health and safety standards required by law for the commercial sale of meat.

The aim is to supply local markets – tourism operations, small scale retailers and businesses with grass-fed, ethically raised meat (cattle, goat and game). The meat will be largely for niche markets, promoting the idea that consumers should know what they are eating and where it comes from.

After eight years in the Mnisi area, the first H4H eco-rangers are now becoming community leaders, pushing the H4H values, with years of local, applied knowledge. Perhaps one of the greatest testaments to the success of the H4H programme was that during the COVID lockdowns, people stuck to the H4H stewardship agreements because they have begun to see the benefits. The community and the programme just carried on with minimal, virtual support. This was a pivotal moment in the history of H4H in the Mnisi TA.

Now, with the experienced eco-trainers on the ground, mentorship can take place over the internet which means the programme can be expanded elsewhere because there is a critical mass of trained and passionate people on the ground in the Mnisi TA. As mentioned above, Cliff Nkuna and the Dixie community have a great story to tell. 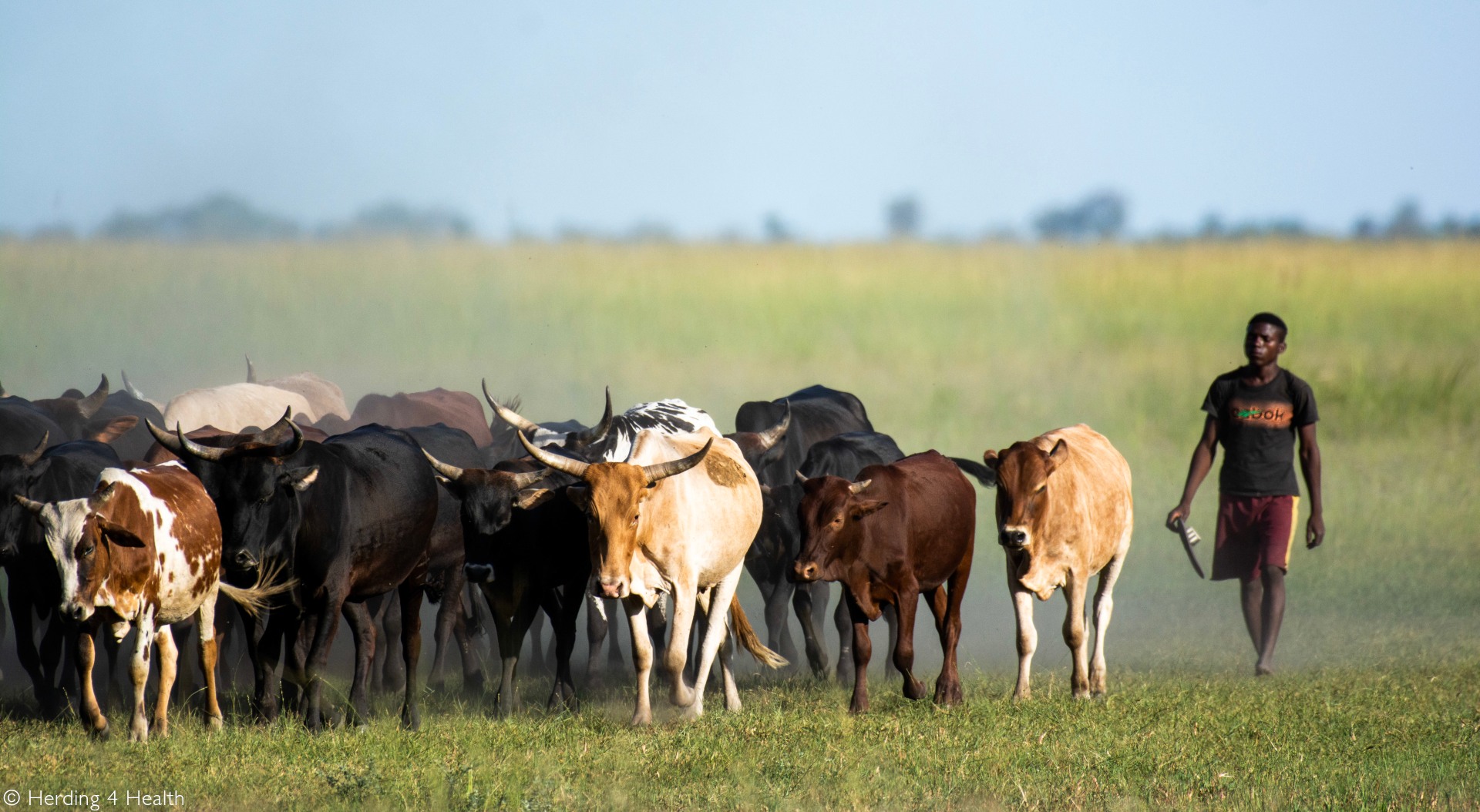 Herding 4 Health is expanding and its current project sites include:

The programme is expanding in Botswana with a multi-million dollar programme underway that will see Botswana funding and deploying 6000 eco-rangers. Over 20,000 unclaimed cattle have been found in parts of Botswana, some wandering several hundred kilometres from their owners – a direct result of ad hoc herding.

H4H allows the government to control the masses of rural cattle. They can mitigate disease and it is hoped that controlling disease will become much easier and with this, access to markets.

A number of major safari operators in Botswana have indicated a willingness to buy local, grass-fed beef as long as it can be shown that herders adhere to the H4H principles. Successful implementation of the programme may also see herds allowed onto wildlife concessions in tough times or for ecological reasons (simulating the grazing effects of large wild animal herds). 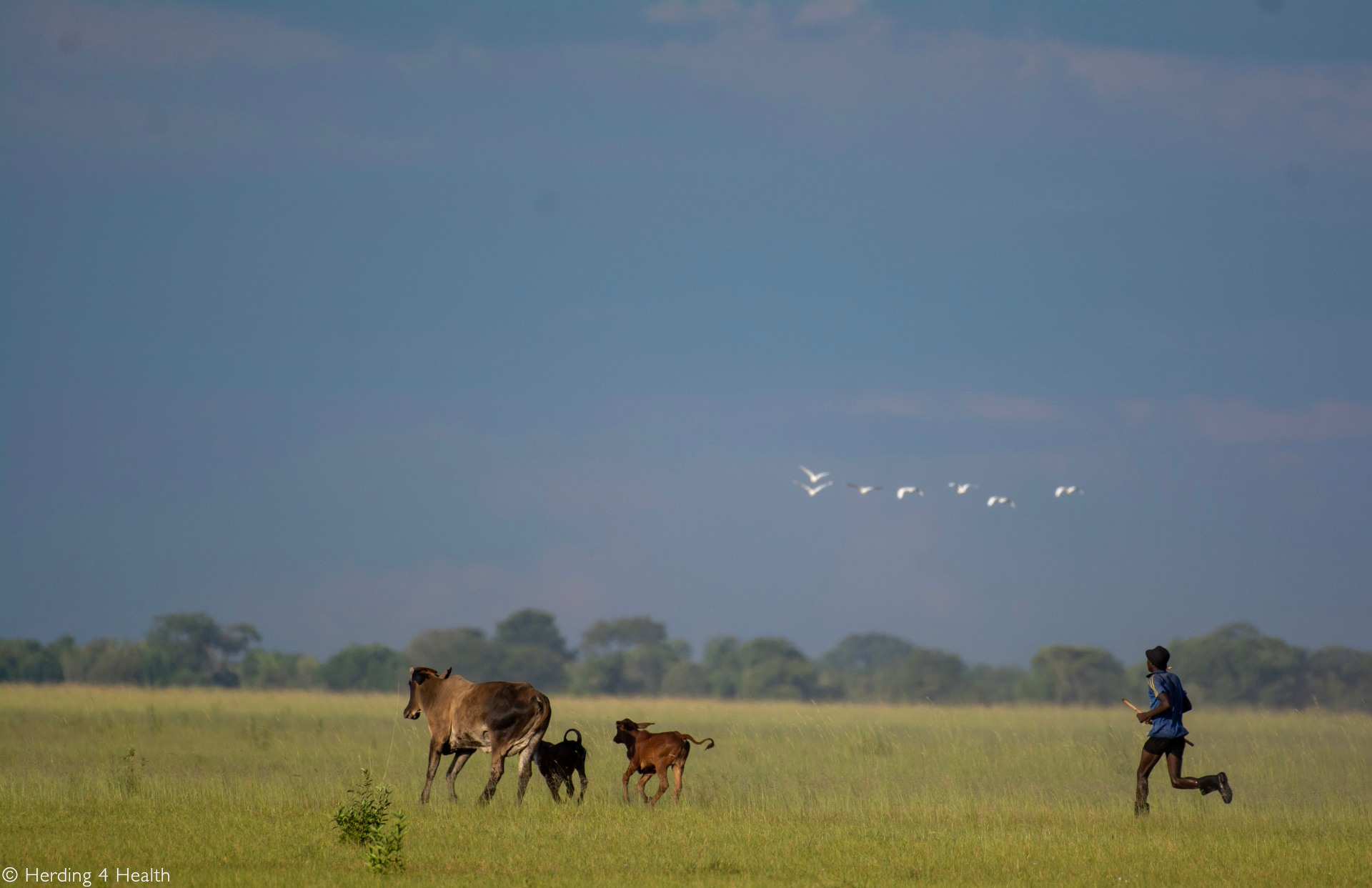 One of the greatest challenges facing wildlife conservation in Africa is the nexus between people and protected areas. Herding 4 Health is proving a viable way to improve the livelihoods of people living in rural areas near conservation reserves. It is making a significant difference to the reduction of human-wildlife conflict. Through effective herding methods, predators have far less impact on livelihoods which in turn reduces revenge killing and a general resentment for wild predators. At the same time, improved rangelands are increasing the number of cattle that land can support while improving rangeland health. This is a hugely important project and it will be fascinating to see it rolled out further, hopefully with increased support from local people, NGOs and government.