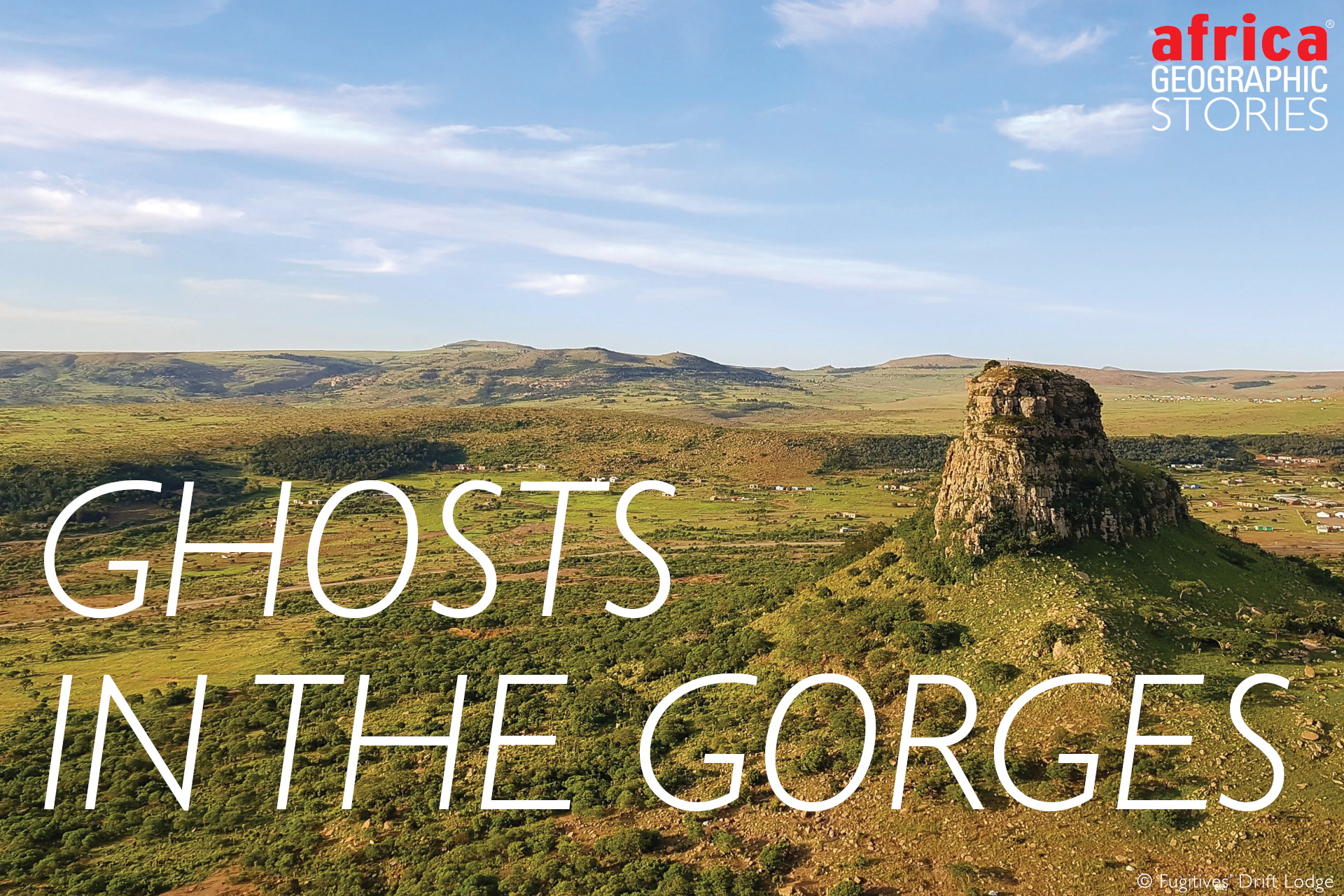 on the fugitives' trail

On the dusty road to Fugitives’ Drift…

About 14 kilometres southeast of the, to be polite, tumbledown settlement of Dundee, we turned east off the potholed tar road into the rough, hill country. We wound our way through farmland and rural Zulu settlements. The lowlands were blanketed in golden winter grass and pimpled with termite mounds. Copses of green and patches of shale fringed the drainage lines. The slopes were on fire with aloe flowers.

My enjoyment of the scenery was briefly interrupted by a homicidal farmer who had not the patience to deal with my slow appreciation of the landscape. He came haring up the hill in front of us, his giant pick-up hooting angrily. I took evasive action and ended teetering on the edge of a precipice in a cloud of dust. As the fine clay cleared from the air, the strange sphinx-like mountain of Isandlwana appeared in the distance.

We were travelling on a road that, historically, led to nowhere in particular – between Isandlwana and another mountain called Ishiyane. In the lee of the latter lies the mission station of Rorke’s Drift, where one of the most remarkable 24 hours in South African history took place.

It is a testament to the abominable teaching of history in South Africa that by the time I’d finished school, I’d learned incessantly about the Boers and their Great Trek, the Russian Revolution and something about Japan’s economic troubles in the wake of the 1865 rice shortage (I may have made that up). I had only vaguely heard of the Anglo-Zulu War of 1879. Yet it was a war, the origins and consequences of which still reverberate through South Africa with lessons, warnings and parallels.

Just past Rorke’s Drift, we turned due east. Down a hill and halfway up the other side, we arrived at a gate, and a guard quickly materialised at my window. I greeted him in Zulu. He rolled his eyes slightly and asked for my name in English, and then smiled. He opened the gate. As we crested the hill, the sphinx mountain appeared again in the distance. Much closer, giraffe, blesbok, wildebeest and a few zebra dotted the woodland and grassy slopes leading to the precipitous gorge of the Buffalo River.

Fugitives’ Drift is owned and run by the Rattray family (not to be confused with the Rattrays of Mala Mala fame). Although the beautiful farm has been in the family for a few generations, the lodge was started by the late David Rattray and his wife, Nicky. Together, they pioneered history tourism in South Africa through a unique combination of Nicky’s natural hospitality, David’s mesmerising story-telling, and the lodge’s location midway between Isandlwana and Rorke’s Drift – the two sites of the famous battles on which the fantastical legend of this area is built.

But for brave history aficionados, visitors to this remote part of KwaZulu were few and far between in 1990. There were a few historical guides in ropey straw hats taking intrepid buffs to the battlefields. Some school busses filled with bored kids and more bored teachers passed by from time to time. The battlefields did not resemble a tourism hotspot.

Firm in self-belief and the captivating power of the stories leaping from a countryside littered with the bones of long ago, David and Nicky took a colossal, courageous gamble to build a little lodge in a place on the road to literally nowhere.

In the beginning, David took all the battlefield tours – Isandlwana in the morning, curry for lunch, 40 minutes on his back, Rorke’s Drift in the evening. He fixed the plumbing, and he cut the flagstones that make up the floor of what is now the gorgeous little museum. While he was doing this, Nicky was supervising miraculous meals, ingredients sourced from god-knows-where. She was checking in the guests, making bookings, doing the accounts.

Fugitives’ Drift is set on an idyllic 2000 hectares of undulating bushveld, acacia woodland,  and rocky viewpoints over 22 kilometres of Buffalo River frontage. To the east, over the rough country where the fugitives from the battle of Isandlwana fled, the sphinx mountain rises. To the northwest, the view is dominated by the Ishiyane mountain, behind which Rorke’s Drift nestles.

The farm takes its name from the third great story of the 22nd of January, 1879 – that of the Fugitives’ flight from the battle at Isandlwana. The river widens briefly not far from the lodge, and it is here that some of the fleeing British soldiers managed to cross the raging torrent. Two of these, Lieutenants Melville and Coghill, were to earn the first two posthumous Victoria Crosses in history. They died in a futile attempt to save the Queen’s Colour of their regiment and, with it, regimental honour. The graves of these two men are a gentle 15-minute walk from the lodge.

Fugitives’ Drift is an AG Club lodge partner. For accommodation options at the best prices, visit our collection of camps and lodges: private travel & conservation club. If you are not yet a member, see how to JOIN below this story.

There are three accommodation options- all of them excellent. For the more budget-conscious, there is Mzinyathi House, a lovely old stone and corrugated iron farmhouse. There’s a fireplace, three en suite bedrooms and a kitchen for self-catering. For those who do not wish to feed themselves, meals at the main lodge are easily arranged.

The Guest House is the site of an old general store. The original building has been altered into a stunning dining and lounge area where guests can sit around a fire in the winter or on the verandah of a summer’s evening, as they marvel at the day’s stories and listen to the faint whispers of history floating on the breeze. The en suite rooms boast views of the Buffalo River valley and Isandlwana rising in the east.

The five-star lodge is where the Rattrays built the original, humble Fugitives’ Drift Lodge. Now it is a gorgeous testament to the Rattray legacy and a tastefully luxurious way to soak up the history and natural beauty of the area. Each suite is individually decorated, opening onto views of the plains, often dotted with antelope, above the Buffalo River gorge. Scrumptious meals are served in the communal dining room or on the deck beneath a colossal fig tree where the birds hop about, squabbling over the fruit while cheeky monkeys watch to see what’s on the menu. You might have tea and while away an afternoon in the Harford Library or browse the artefacts in the museum – the floor stones of which I mentioned earlier.

While Nicky set about creating an atmosphere of homely luxury at the lodge, David (with his photographic memory, passion for history, and Zulu language skills) sallied forth into the countryside with his childhood friend, Satchmo Mpanza, to find the Zulu side of the Anglo-Zulu war story. He spoke to the children and grandchildren of the warriors who fought at the battles of Isandlwana and Rorke’s Drift.

Armed with this knowledge, a booming voice and a knack for theatre, David spawned an industry in historical storytelling. He took the initial, irregular trickle of guests onto the battlefields and told the jaw-dropping story of the Day of the Dead Moon. Those guests told their friends of the tears they’d shed on the bones of the brave, dead men of both sides. That trickle of travellers turned into a torrent.

The first battle took place in the eerie quarter-light of a solar eclipse on the slopes of Isandlwana. On the 22nd of January 1879, the Zulu army, inspired by their king Cetshwayo and led by their 70-year-old general Ntshingwayo, inflicted the heaviest defeat ever suffered by a colonial British army. They did so to repel a massive British invasion of Zululand and defend the old Zulu order.

Later on the same day, a small band of some 150 British soldiers, many injured and sick, defended Rorke’s Drift from 3,000 to 4,000 Zulu warriors. They fought through the night behind barricades of biscuit boxes and bags of maize, their Martini-Henry rifles turning red as they fired round after round into their attackers. More Victoria Crosses were awarded for valour at Rorke’s Drift than at any other battle in history.

David sadly died in 2007, but his legacy as the country’s premier historical storyteller lives on in the guiding team at Fugitives’, lead by his son Douglas. Indeed, there are any number of storytellers knocking about South Africa making a living from talking about our country’s rich and turbulent history. Just about all of them have borrowed inflexions and style from the master himself. (Do yourself a favour and listen to David tell the Anglo-Zulu war epic here).

I have had the privilege of hearing David and his sons, Andrew and Douglas, tell the stories of these battles. On this trip, Douglas delivered the Rorke’s Drift epic on-site at the little mission station. As the sun turned carmine in the dusty west, Douglas extolled the courage of the British soldiers and Zulu warriors. As the dusk closed around us, he removed his peaked hat, placed it on the end of his stick and finished with Laurence Binyon’s immortal words:

They shall grow not old, as we that are left grow old:

Age shall not weary them, nor the years condemn.

At the going down of the sun and in the morning

We will remember them.

I have heard Douglas deliver this talk twice. Both times, I have had to turn away as the tears rolled down my cheeks.

Fugitives’ Drift is a rejuvenating getaway for heart and soul, where the hills breathe history and ghosts whisper in the moonlit gorges. The lodge is a haven of family hospitality in a breathtaking natural setting.

Fugitives’ Drift does a lot of work in the communities surrounding the farm, mainly in education and sustainability. To find out more, have a look at Khulu Education