Exploring the Jurassic world of Mahé in the Seychelles

Posted on January 30, 2019 by Maurice Schutgens

Several hours flight due east of mainland Africa a rugged island, covered in towering green mountains and home to wild stretches of coastline, rises from the ocean floor. From afar it looks positively Jurassic, an Eden in every sense of the word. It is only when you draw near that you see the tell-tale signs of humanity carving out an existence in the middle of the Indian Ocean.

“Welcome to Seychelles. Enjoy your stay!” the immigration officer said cheerfully before waving us through. We could barely contain our excitement, we had arrived in Seychelles!

The sun was shining and the tropical humidity drenched us to the bone in minutes. Our hire car was waiting for us and we quickly navigated our way into the sparse afternoon traffic heading for Anse a la Mouche located in the southwest of the island. We had booked an incredibly cute wooden bungalow located in a lush piece of forest just a stone throw from the beach.

By the time we had found it (we got lost a few times) the sun was fighting its last battle. We strolled over to the nearby beach and sat side by side as we watched a mesmerising display of colours in the sky.

We had given ourselves four days to explore all of Mahé – the largest island in the Seychelles archipelago – had to offer… and there was plenty on offer.

From lazy drives on winding roads traversing the island to impromptu picnics on hidden away beaches to grabbing drinks in Beau Vallon to hiking in Morne Seychellois National Park returning just in time to chase another sunset. It was magical.

The stretch of coastline along Port Launay Marine National Park was especially wild. A non-descript little track led to a rocky outcrop from where we had the most incredible view overlooking a beach with towering green mountains in the background and white caps of breaking waves hungrily advancing on the shores down below.

Like I said – Jurassic in every sense of the word.

Mahé was a hiker’s paradise with an impressive network of trails for all degrees of fitness and sense of adventure. The 30-minute scramble up to the Morne Blanc viewpoint was well worth the exertion and the 45-minute trail to Anse Major in the northeast of the island was simply put: spectacular.

It was an easy path that took us high above the tantalising azure waters before dropping down to an incredibly secluded little bay. With a little bit of sadness, we were forced to leave many more trails unexplored.

The days merged into one and before knew it our time had come to an end. On our last day on the island, we headed for Victoria, the laid-back capital city of Seychelles. While not the most attractive of cities, it exuded just enough charm with its wide boulevards, bustling markets and old colonial architecture to keep us hooked for a few hours.

Though, with all the concrete around the heat was punishing. We needed a quick escape.

“Shall we go into the Natural History Museum babe?” I suggested hopefully. Surely, they would have some air-conditioning. Jorien agreed. And yes, they did have aircon.

After spending an hour learning about volcanic rocks we braved the streets of Victoria again. We wandered over to the famous cast-iron clock tower on Independence Avenue, erected in 1903, then onto the Victoria Market where an explosion of colours and smells hit us. We got a takeaway octopus curry from a local joint. Seychellois cuisine was extremely tasty!

For many travellers, Mahé is but a stepping stone to one or more of the other 115 islands that make up the archipelago, but as far as rugged beauty is concerned you are not going to find much better than Mahé… so give it a chance! 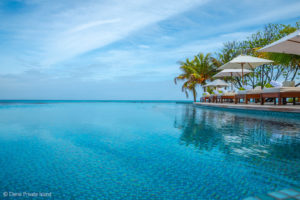