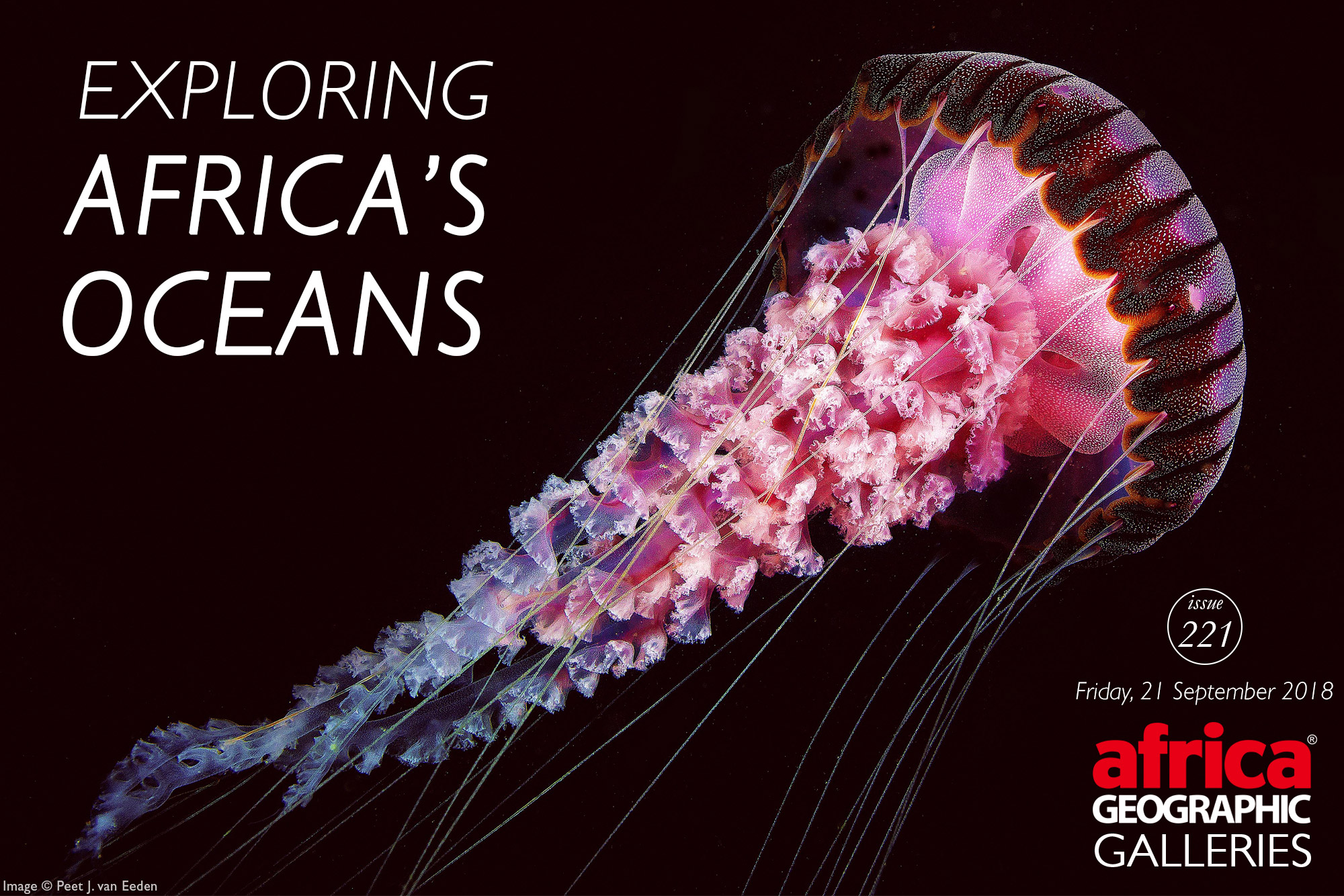 Home to some of the most spectacular and treasured life, the oceans and seas surrounding Africa contain a multitude of creatures that thrive in the warm and cold currents that run along our continent. Various bodies of water surround Africa – the Mediterranean Sea to the north, the Suez Canal and the Red Sea along the Sinai Peninsula to the northeast, the Indian Ocean to the east and southeast, and the Atlantic Ocean to the west – and in these waters, you will find an array of dazzling lifeforms, from the smallest nudibranch to the impressive schools of fish that move through the water like a flock of red-billed queleas on the African plains.
Join us as we take a glimpse into the underwater world of our African oceans and seas through the eyes of photographers who submitted their photos into our Photographer of the Year 2016, 2017 and 2018 competitions. 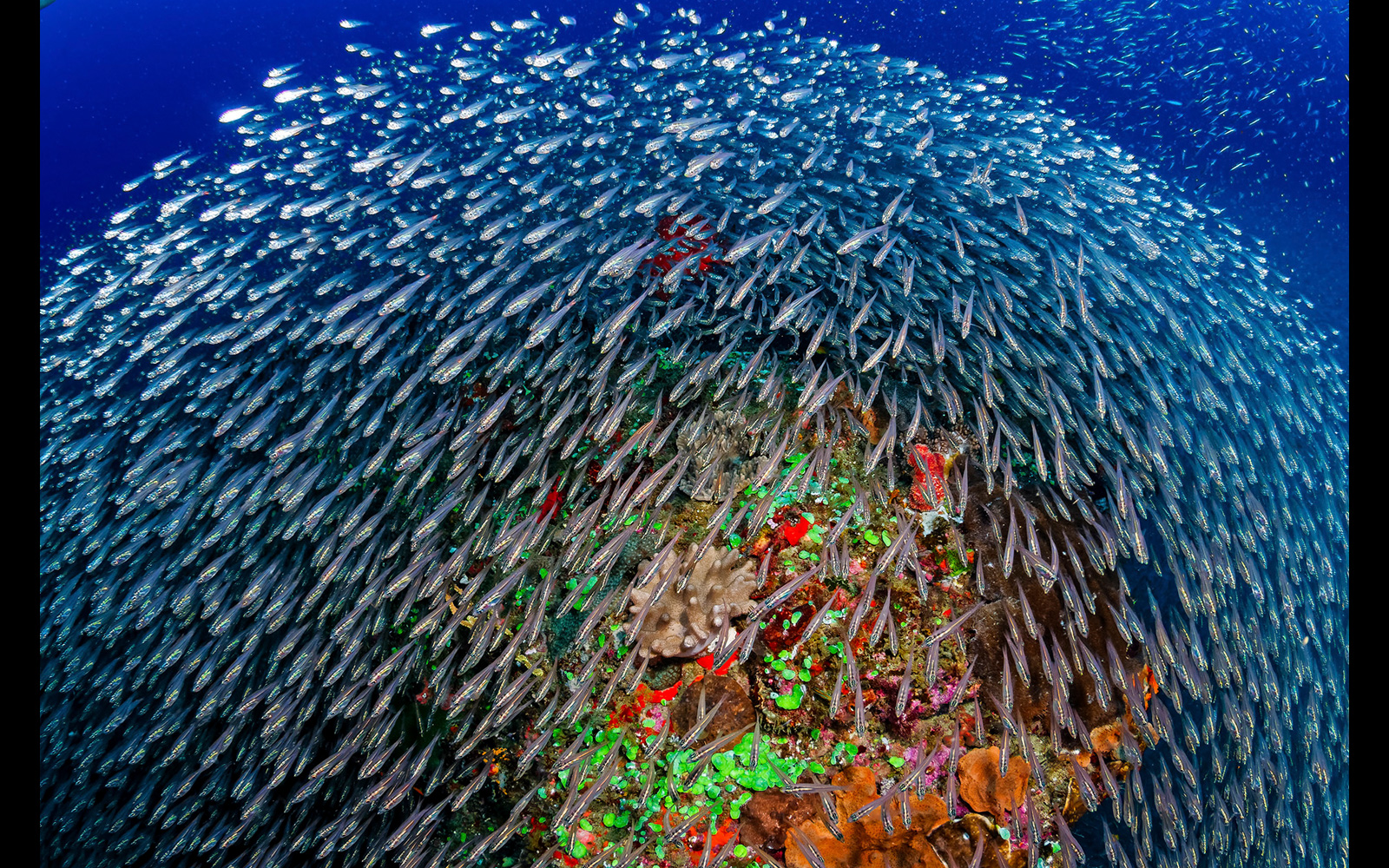 ?  A healthy reef with an abundance of life in Sodwana Bay, South Africa © Geo Cloete (Photographer of the Year 2018 Top 101)

“The life-sustaining benefits of rainforest to our planet is more commonly known than those provided by a healthy ocean, but in fact, the ocean contributes even more – and I wanted to capture a photo conveying this message. The school of fish represents the ozone, and the reef below is Earth. Sadly, when it comes to the ocean, the ‘out of sight out of mind’ way of thinking often applies. This has led to major pollution and overfishing. Should we carry along the same path, it’s estimated that there will be no fish left in the ocean by 2050. However, all is not lost as marine reserves around the globe have proven what a remarkable recovery the marine ecosystem can make if given full protection. Sodwana Bay is the oldest marine reserve in South Africa and its healthy reefs and rich; diverse marine life is a prime example of this.” ~ Geo Cloete 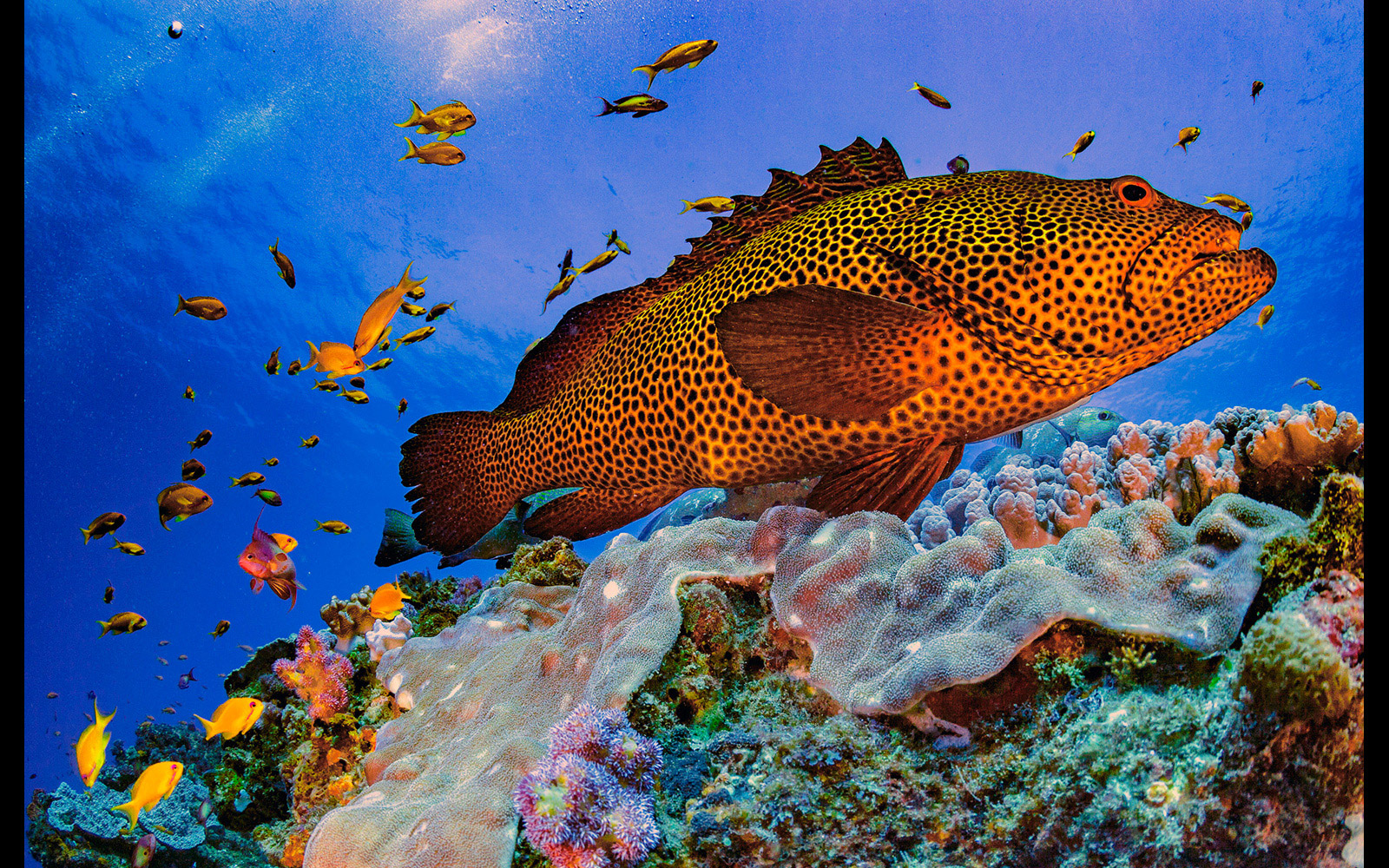 “The tiger rock cod is a rare saltwater fish species. Not a lot is known about the species, but they occur in deep water reefs and is vulnerable to overfishing. They are solitary and derive their name from the beautiful colour and spots.” ~ Peet J. van Eeden 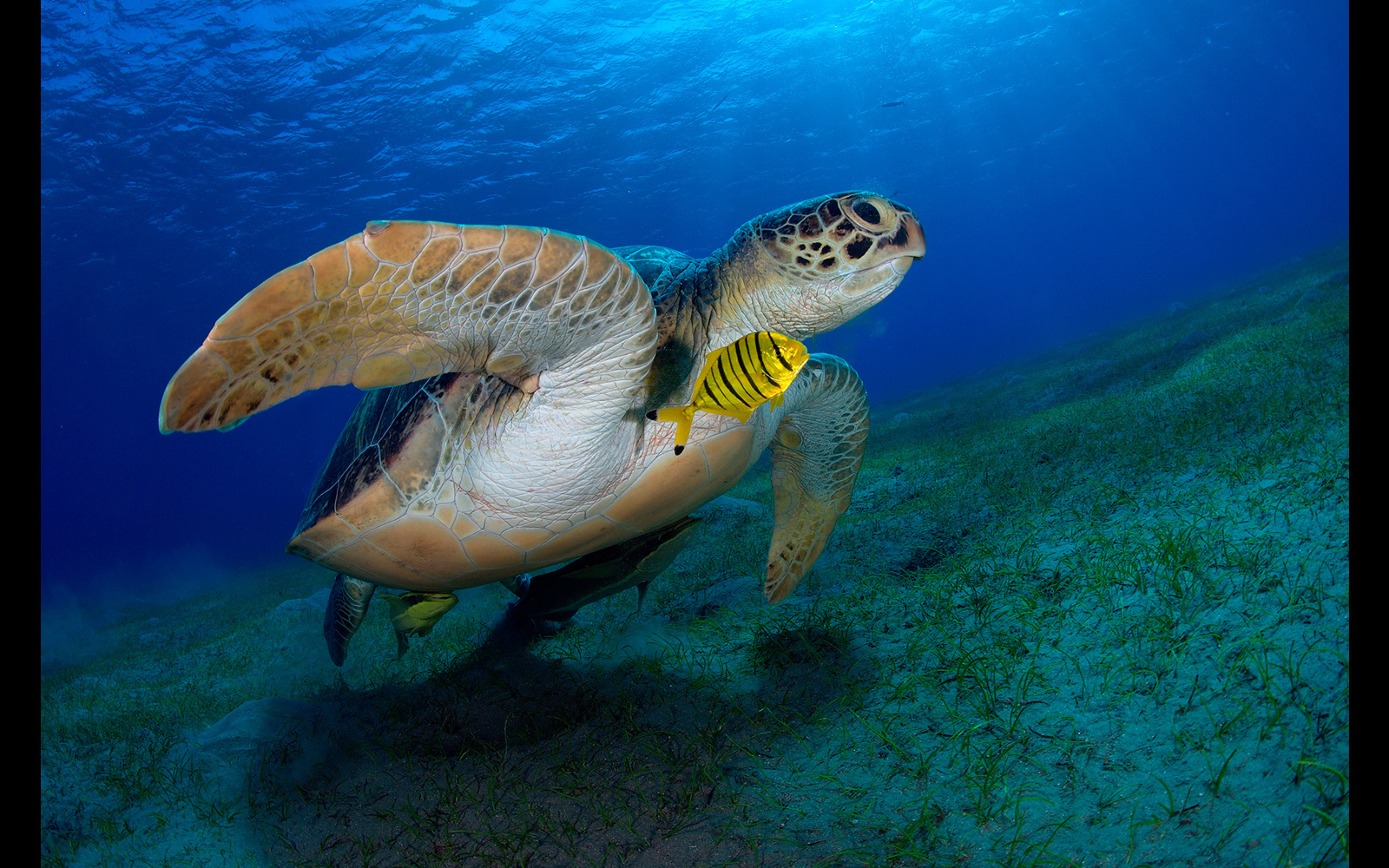 ?  A green turtle swims in the blue waters at Marsa Abu Dabbab in the Red Sea, Egypt © Cristian Umili (Photographer of the Year 2018 entrant)

“I went diving at the newly discovered Atlantis reef. The visibility was less than five metres, and it was a disappointing dive. I saw this compass jellyfish at the safety stop at five metres after completion of the dive. I was swimming slowly after it, blacking out the background to highlight its vivid colours.” ~ Peet J. van Eeden 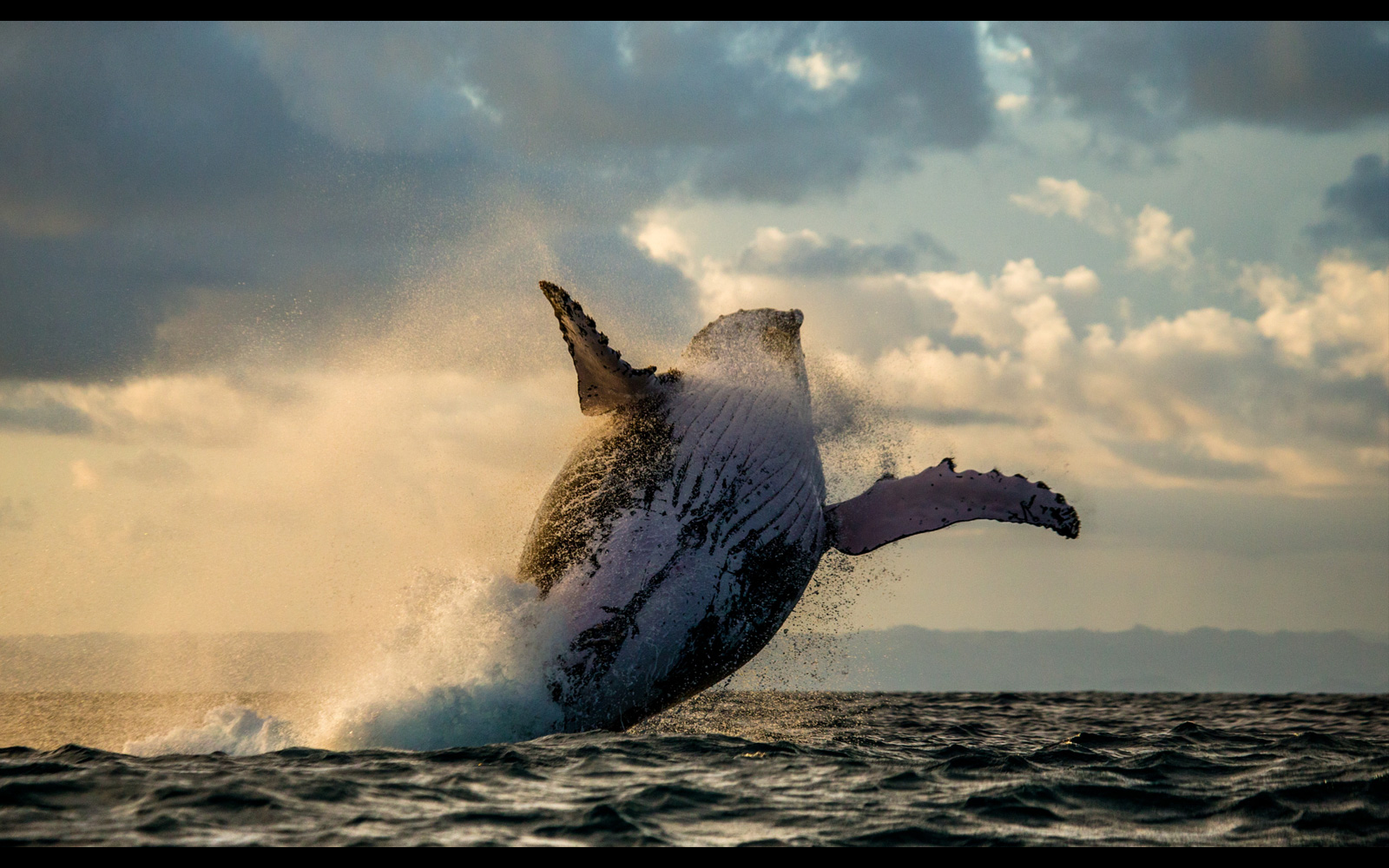 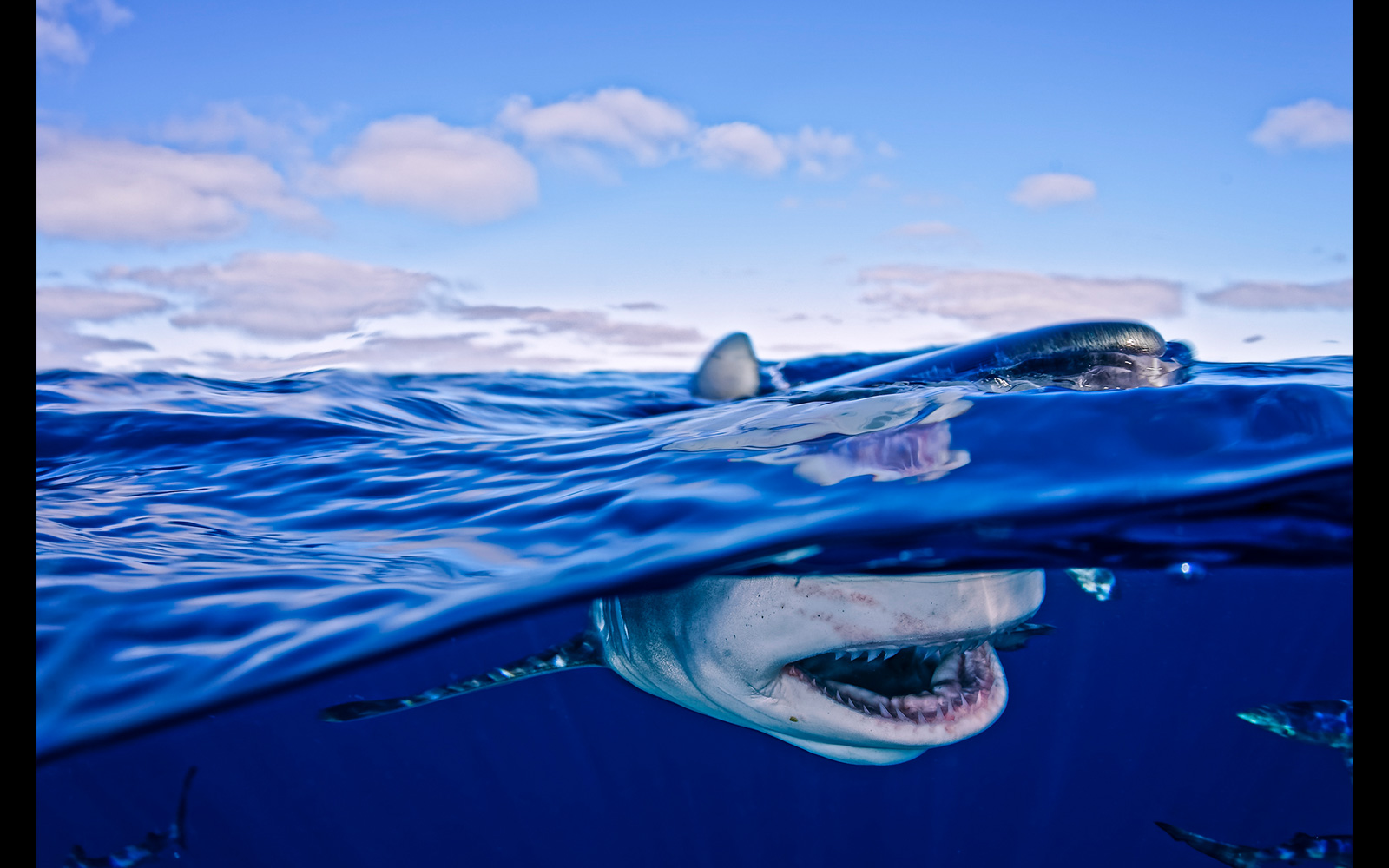 ?  A blue shark just below the surface about 40km off Cape Point, South Africa © Geo Cloete (Photographer of the Year 2018 Top 101)

“Sail southwest from Cape Point and eventually you will be surrounded by the blue horizon in all directions. It’s here, in the deep, pelagic waters, where blue sharks (Prionace glauca) call it home. It’s a beautiful part of the world – this blue ‘desert’ with its hidden abundance of life. Inshore, people often mistake the pectoral fin of a sunfish floating on the surface to be that of a shark’s dorsal fin. Out here in the deep blue waters, the fin indeed belongs to a blue shark, swimming just below the surface. Blue sharks have the largest distribution range around the globe, and are unfortunately the shark species targeted the most by fishermen for their fins.” ~ Geo Cloete 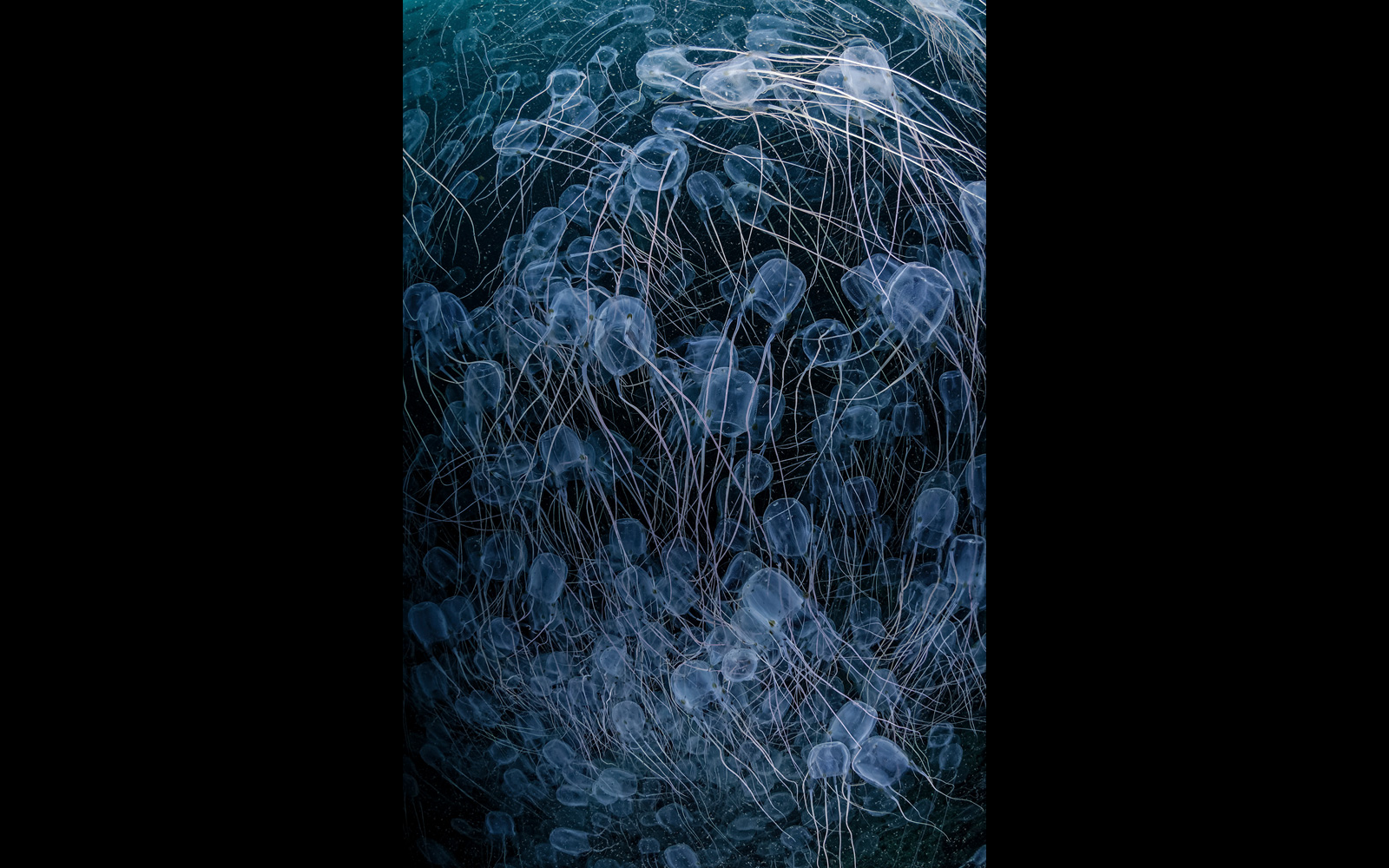 “In 2016, I published a photo of an unusual and yet to be described behaviour displayed by box jellyfish. The scene was of a huge congregation which consisted of a densely stacked (but spread out) base. From the base, several ‘columns’ stretched up high into the water column. Due to the sheer size of the smack of jellyfish, it was impossible to capture the complete scene in a single frame, even though I was using a fisheye lens. This photo depicts a portion of the base of the smack, illustrating the dense concentration of jellyfish.” ~ Geo Cloete 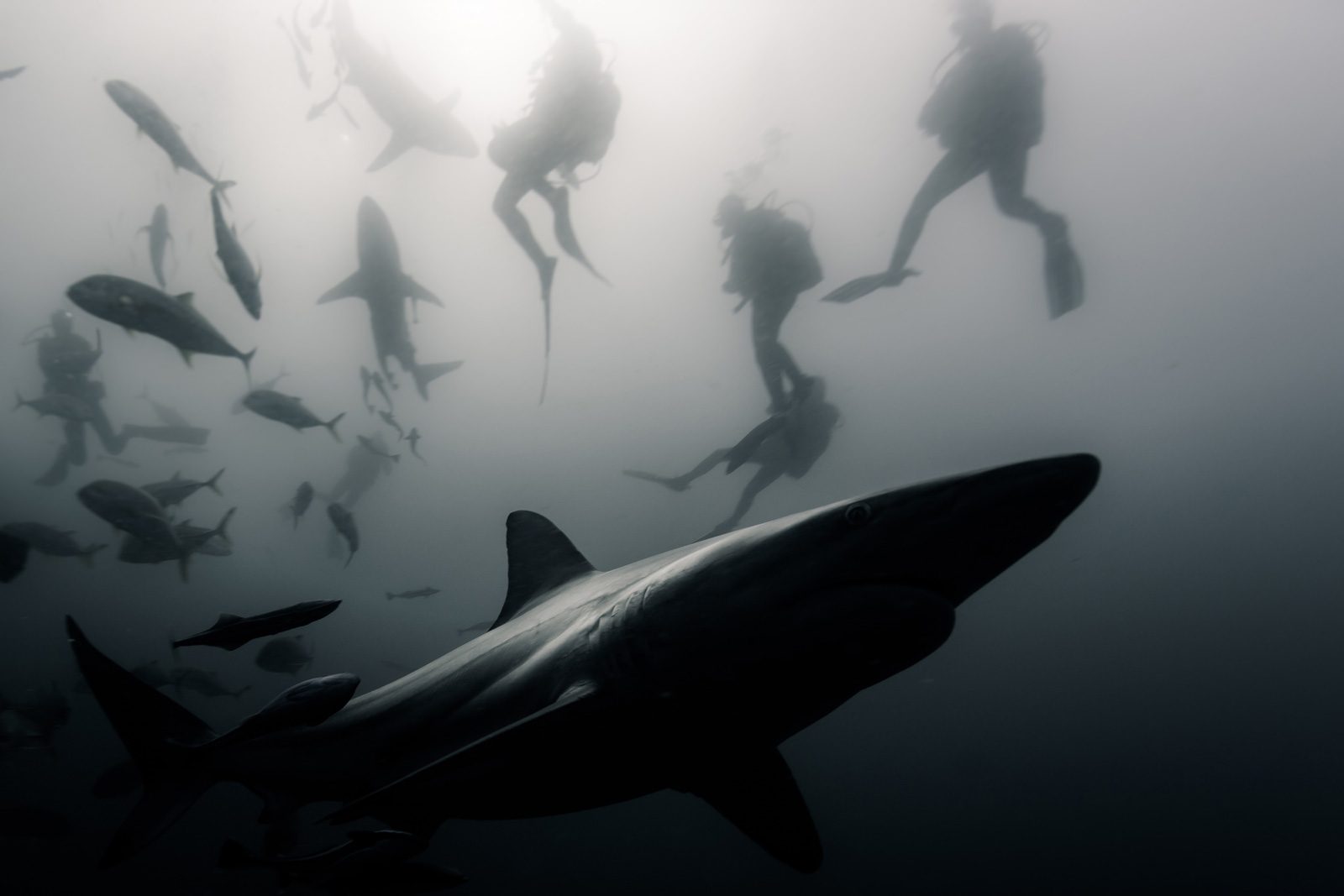 ?  “Shadows in the water” at the Aliwal Shoal, South Africa © Christophe Lapeze (Photographer of the Year 2017 Entrant) 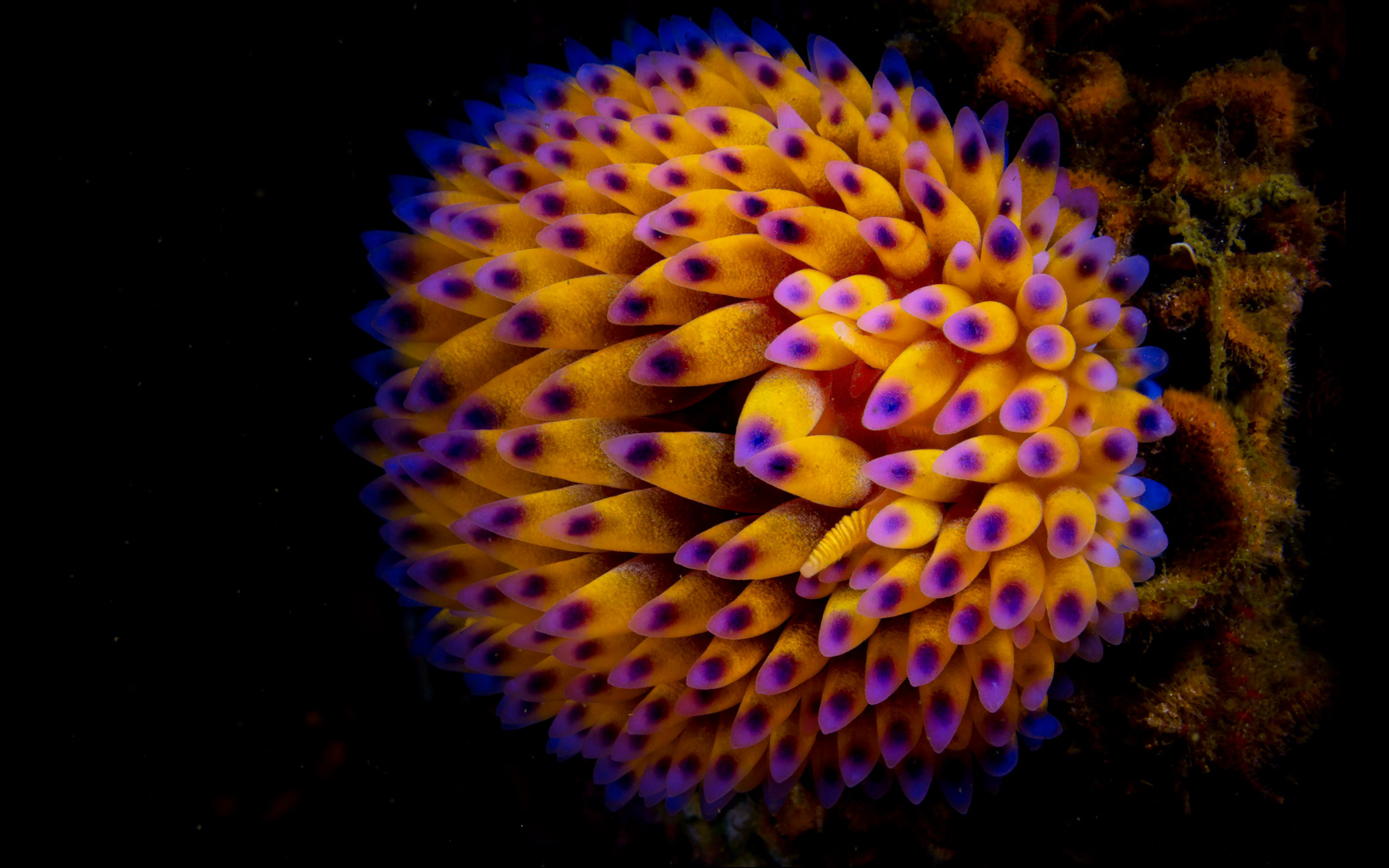 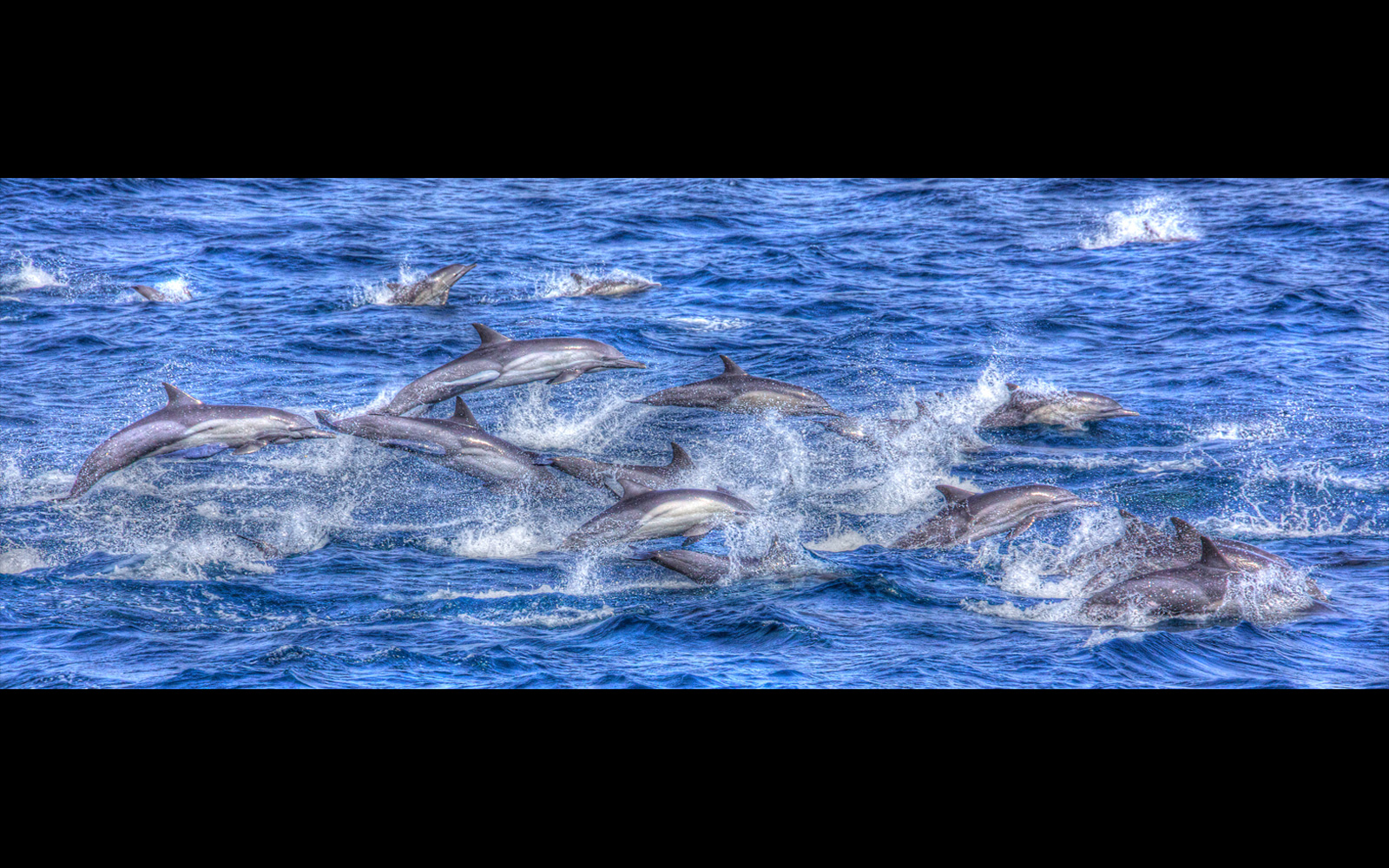 ?  A frenzy of dolphins off the coast of Cote d-Ivoire © Gary Krosin (Photographer of the Year 2018 Entrant) 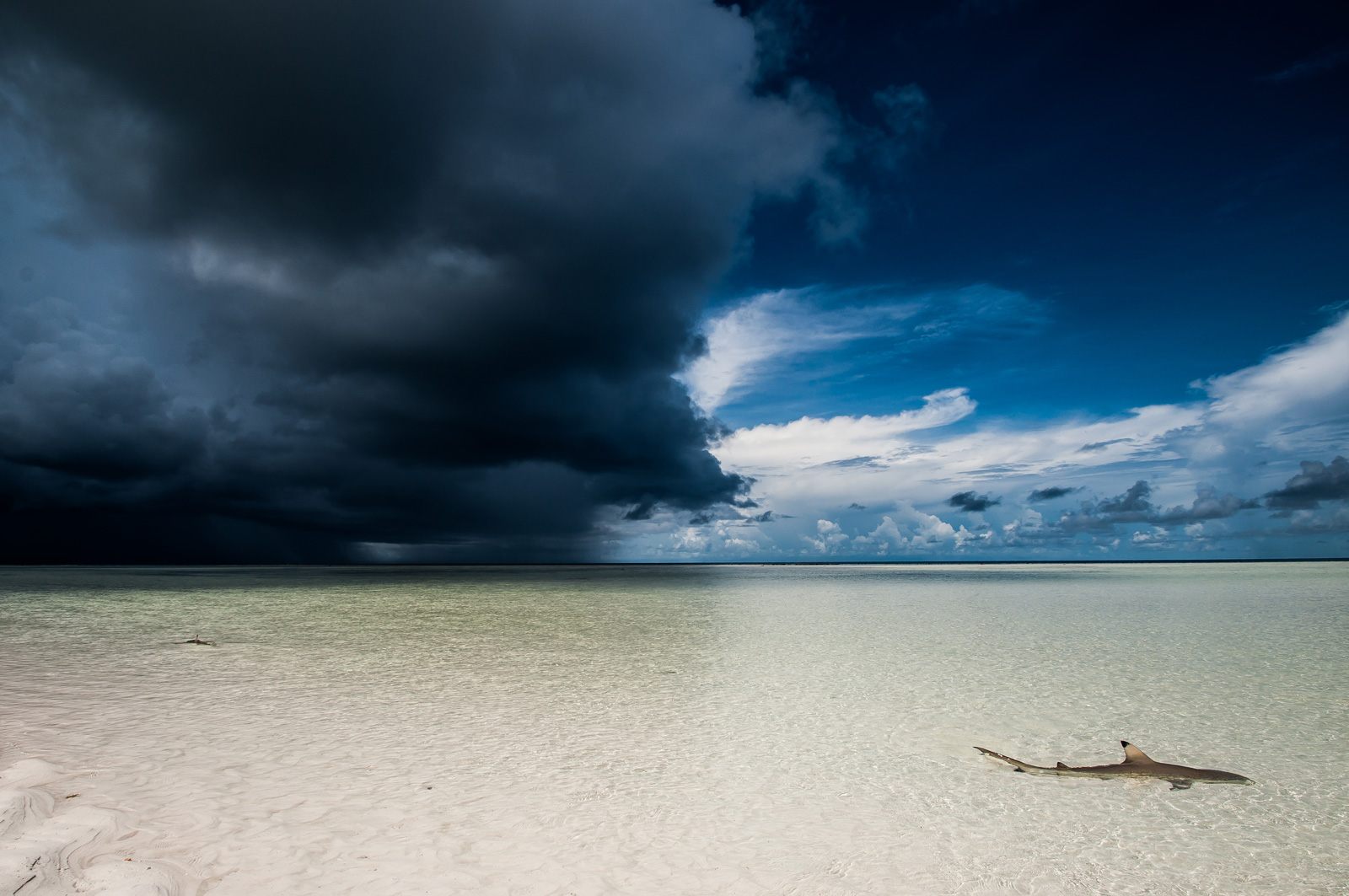 ?  A blacktip shark cruises the lagoon as a storm approaches in Aldabra atoll, Seychelles © Adam Mitchell (Photographer of the Year 2017 Top 101)

“The Aldabra atoll has one of the highest shark densities of anywhere in the western Indian Ocean. This particular shark was cruising with the outgoing current towards the lagoon entrance as a storm front darkened the sky on the horizon. Within minutes, the blindingly bright white flats had been obscured by the downpour, and I lost the shark in the rain. Fast as they are, I doubt this shark was quick enough to outrun the storm.” ~ Adam Mitchell 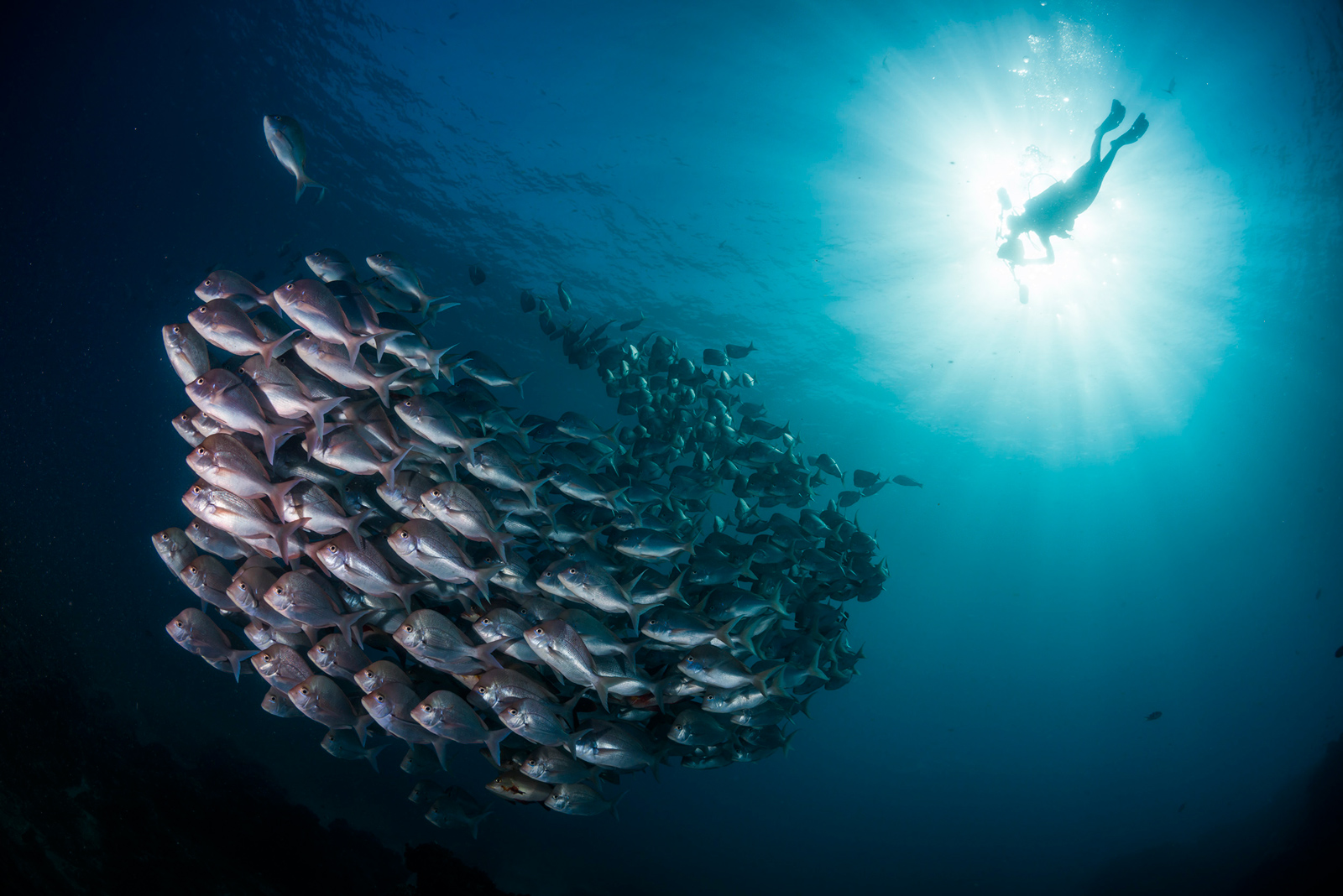 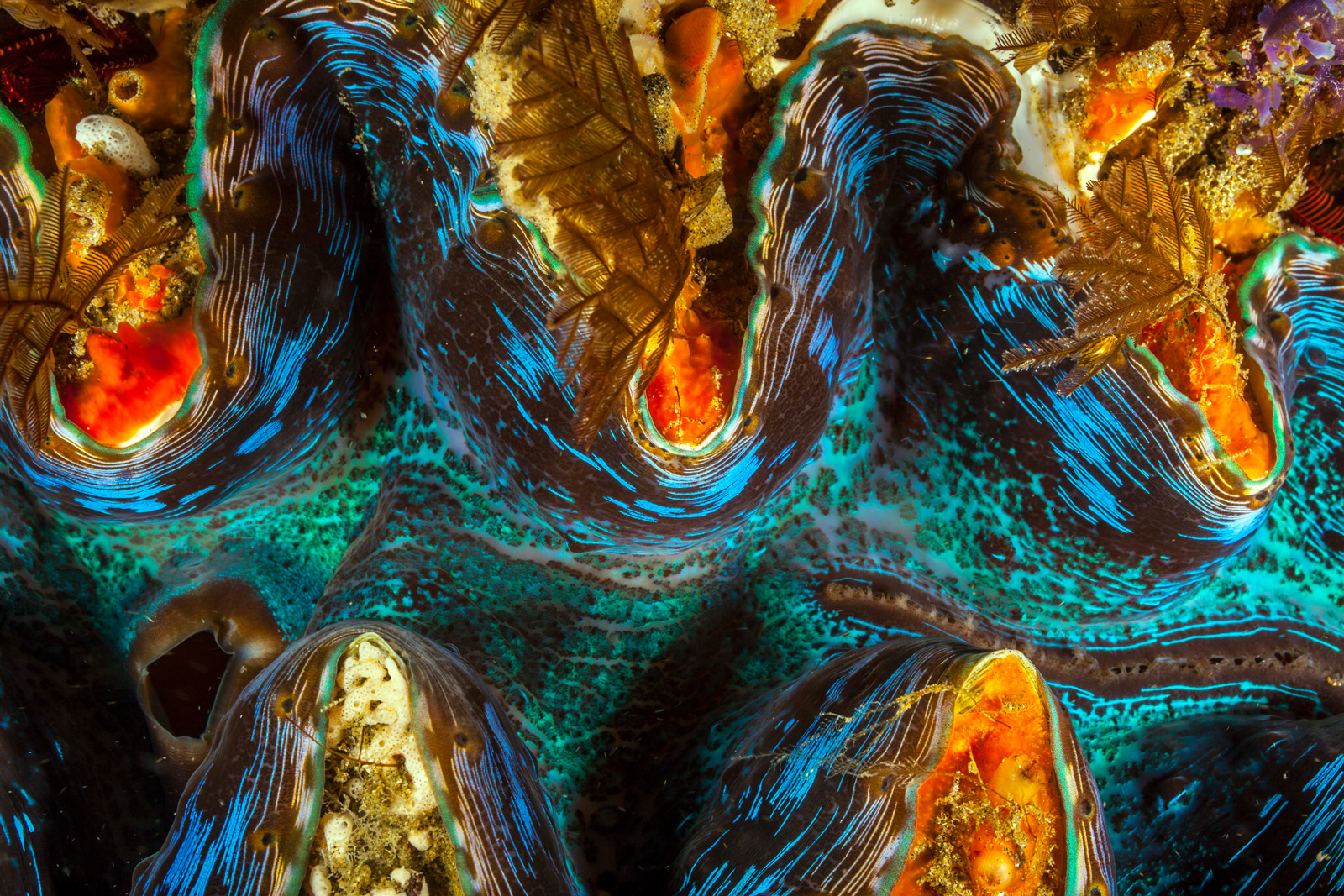 “Giant sea clams typically occur on the east coast of Africa in clear water of less than 10 metres. They are filter feeders by their specialised gills. The visible mantle tissue is responsible for its colourful appearance, and it harbours large populations of single-celled photosynthetic algae or zooxanthellae.” ~ Peet J. van Eeden