Can elephants run, or do they just walk faster?

Posted on February 12, 2018 by teamAG in the Decoding Science post series.
ShareTweetPinEmailShareShareLinkedIn

A fascinating study has revealed that although elephants can move at a considerable pace, there is a question as to whether they can run.

The study was published in Nature and reported on in the Stanford News Service way back in 2003 by Dawn Levy. An oldie but a goodie!

The study suggests that, even at fast speeds (up to 15 mph/24 km/h), it might seem to the casual observer that elephants don’t run. Their footfall pattern remains the same as that in walking, and never do all four feet leave the ground at the same time – a hallmark of running. But an elephant’s centre of mass appears to bounce at high speeds, which meets the biomechanical definition of running.

“We do find evidence that elephants run in a sense,” said first author John Hutchinson, a Stanford postdoctoral research fellow in the Department of Mechanical Engineering. “It’s an intermediate sort of gait, but it looks like what we biomechanically would call running. They don’t leave the ground, which is the classical definition, but they do seem to bounce, which is the biomechanical definition.”

For their experiments, Hutchinson and co-researcher Dan Famini palpated the limbs of captive Asian elephants to find their joints and then marked the joints with large dots of water-soluble, non-toxic paint. They videotaped 188 trials of 42 Asian elephants walking and running through a 100-foot course and measured their speed with photosensors and video analysis. 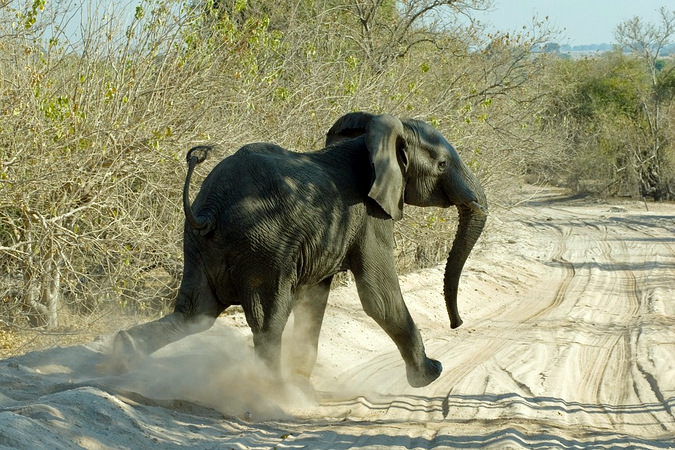 So, what turns a walk into a run?

It isn’t just speed, although that plays a part.

Kinematically, one thing that distinguishes walking from running is the footfall pattern. Typical quadrupeds use a walk at slow speeds, a trot at medium speeds and a gallop at fast speeds – and each gait has a different footfall sequence/pattern. But elephants are weird because no matter how fast they go, their footfall pattern doesn’t change. They use a walking footfall pattern even at top speed. That pattern has the left hind foot moving first, followed by a brief pause, after which the left front foot moves. Then there’s a long pause, after which the same thing happens on the right side.

An all-aerial phase, where no feet are touching the ground, also kinematically differentiates running from walking. But elephants never have all their feet off the ground. Other species also do not leave the ground when running, including many ground birds.

A deeper biomechanical mechanism may explain running better than the aerial phase frequently observed. Animals shift from a walk to a run because at faster speeds, walking becomes less energetically efficient, or more mechanically stressful, than running. But again, elephants seem to avoid that shift in gears.

Hutchinson said “walking is a stiff, pendulum-like gait; the limb stays pretty straight and swings back and forth. Running is a bouncing gait in which the limb actually compresses and bounces back with a spring.”

The researchers’ kinematic measurements suggest that fast-moving elephants may switch from a pendulum-like gait to a bouncing gait – a bit like a pogo stick, but without leaving the ground. If they do, they fit the biomechanical definition for running. But to measure this, the elephants would need to move across a device that measures their impact on the ground. And that needs to be a very sturdy device.

So, do elephants actually run? We think so, but the jury is still out…

The full coverage of the report: Stanford News Service, Dawn Levy: “Speedy elephants use a biomechanical trick to ‘run’ like Groucho” 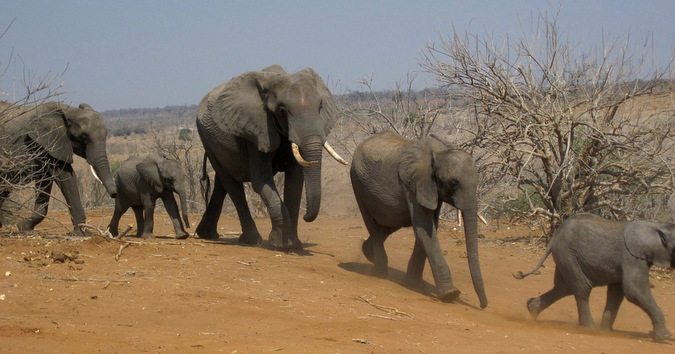