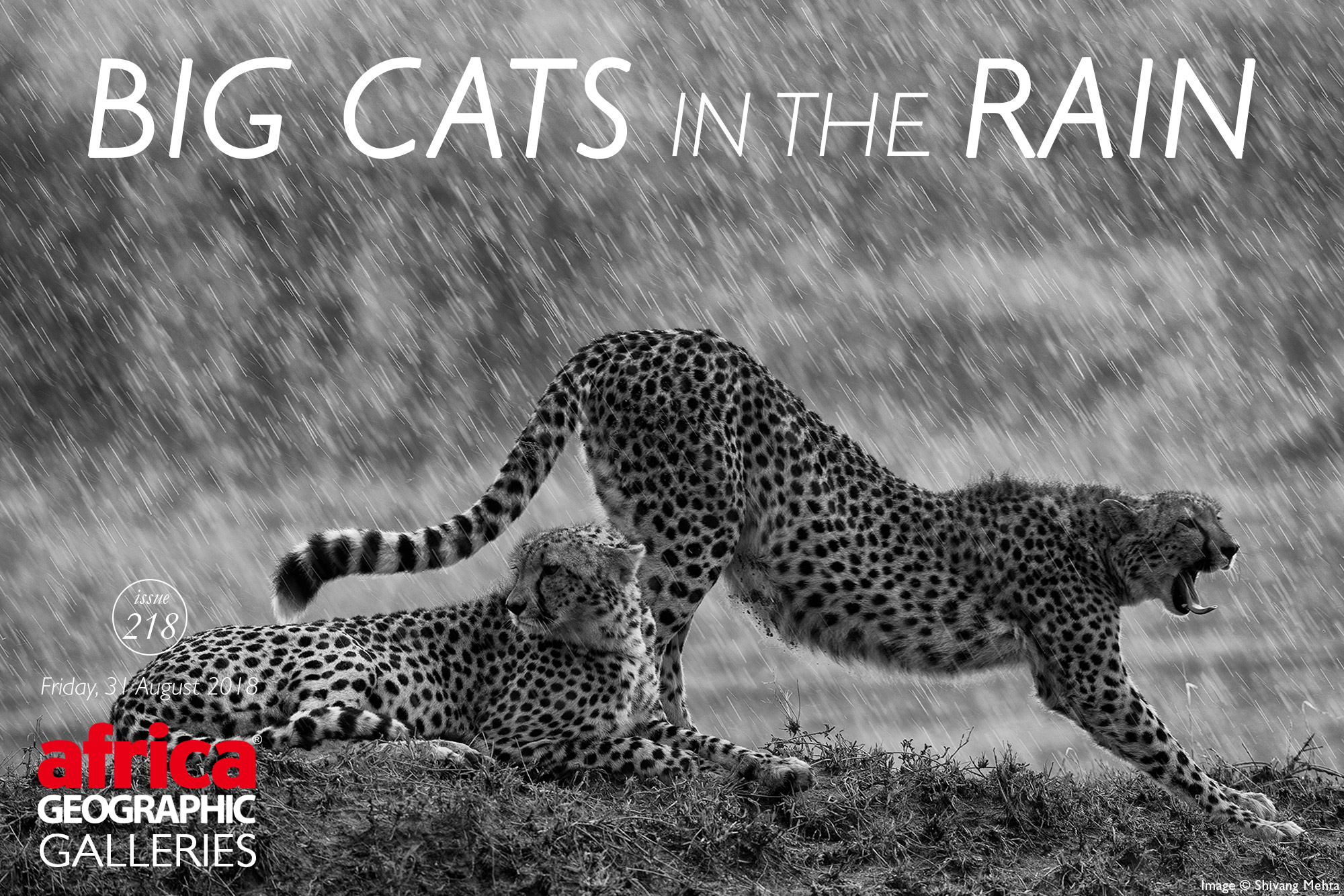 Big Cats in the Rain

”I think that the world should be full of cats and full of rain, that’s all, just cats and rain, rain and cats, very nice, good night.” ~ Charles Bukowski, ‘Betting on the Muse: Poems and Stories’
Cats and rain don’t generally go well together. However, if you’re a big cat in the African wild, then it is pretty challenging to avoid those epic, rainy season downpours, and at other times the occasional passing shower. For those mighty felines, it’s just something they’ve learnt to live with – even if it looks like they are not enjoying it!
That said, there is something magical and enchanting about seeing leopards, lions and cheetahs in the rain, and for both amateur and professional photographers alike, these scenes can produce some stunning images. For that reason, we are sharing with you today some of the incredible and captivating Big Cats in the Rain photos, taken by our Photographer of the Year 2017 and 2018 competition entrants. Enjoy! 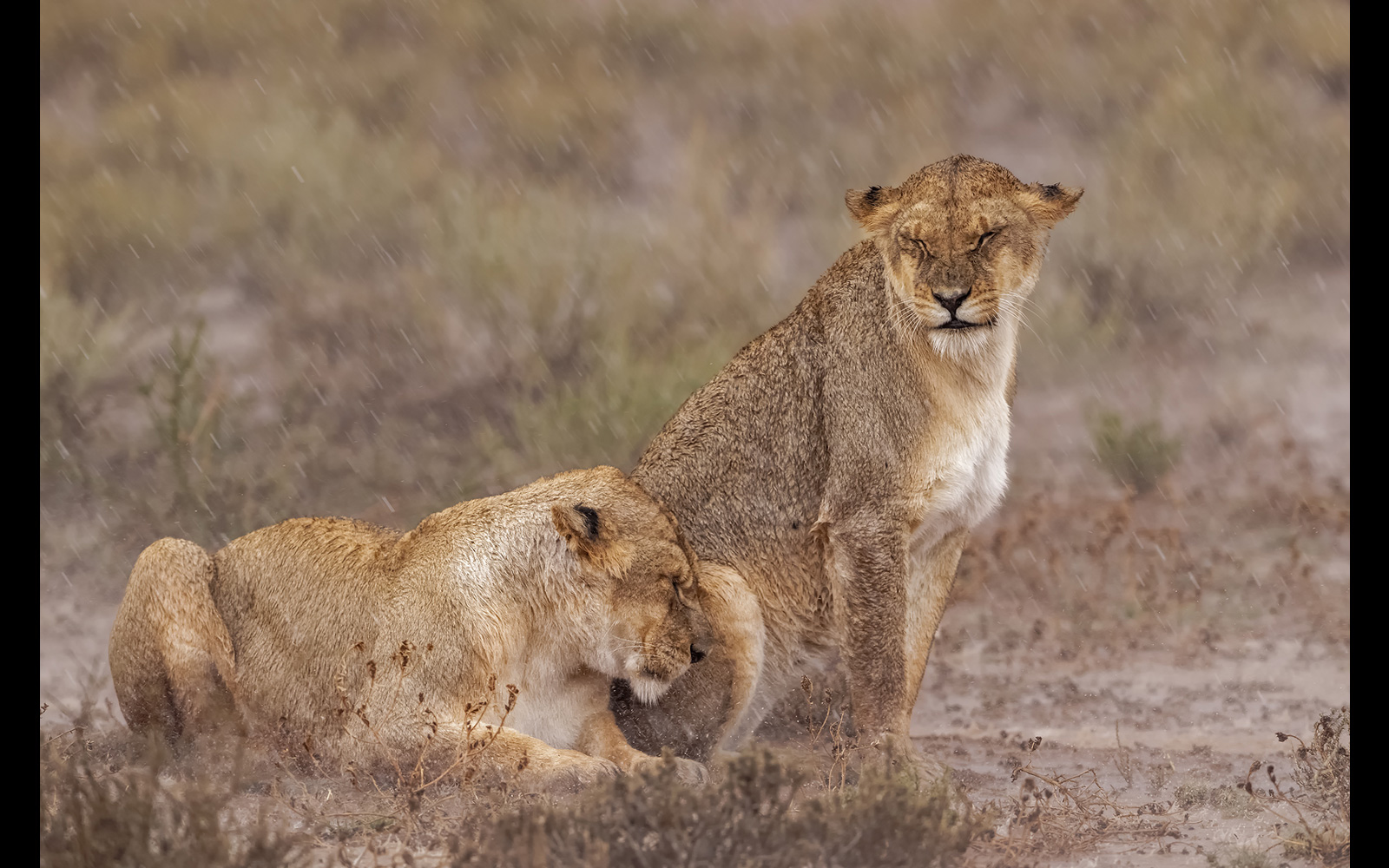 ?  Waiting for the rain to pass in Kgalagadi Transfrontier Park, South Africa © Willem Kruger (Photographer of the Year 2018 Top 101)

“It was a hot day in the park, and as we were near Kampersboom, we came across two lionesses and one male lion lying in the shade. We decided to leave them be and drove on. About 10 km further in we saw some dark clouds with rain and lightning approaching us. Then we realised that the rain would move directly over the lions – so we turned around and waited patiently with the lions for the rain to arrive. It was interesting to see that when raindrops started to fall, the lions got up from under the trees and walked to the middle of the riverbed where they just sat there, waiting for the rain to pass. They did not look very impressed with the rain.” ~ Willem Kruger 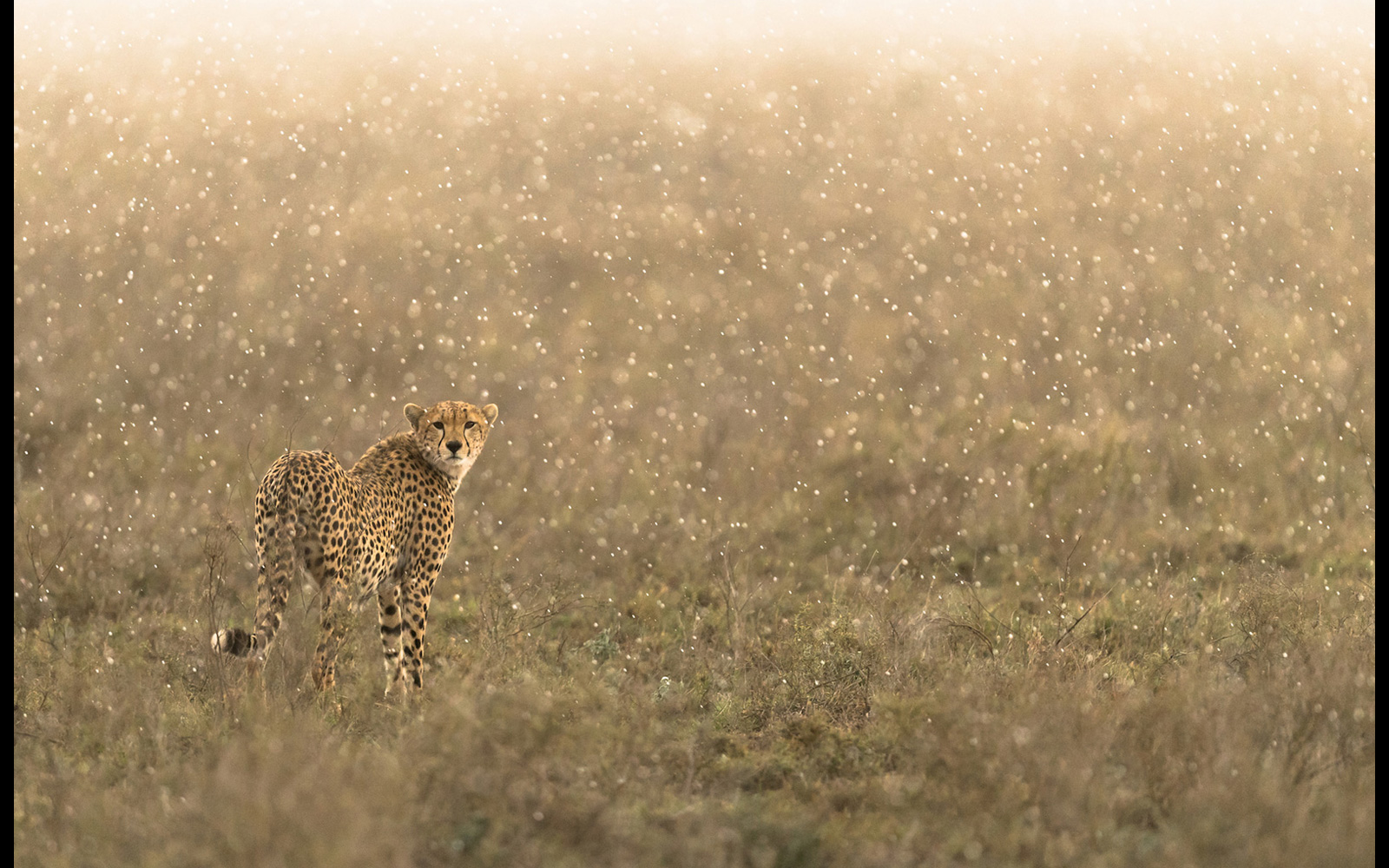 “Habitat loss, illegal trade and human conflict have led to cheetah numbers plummeting to under 8,000 globally and less than 100 in Asia. I wanted to capture the vulnerability of the species in one, single image. I’d dreamt of chunky raindrops being illuminated by a distant light, with a storm overhead. With the forecast right, I waited in the hope that a cheetah would pass. He did. The image doesn’t shout ‘doom’ for a reason, and the ethereal effect of the light and raindrops highlights an element of hope.” ~ George Turner 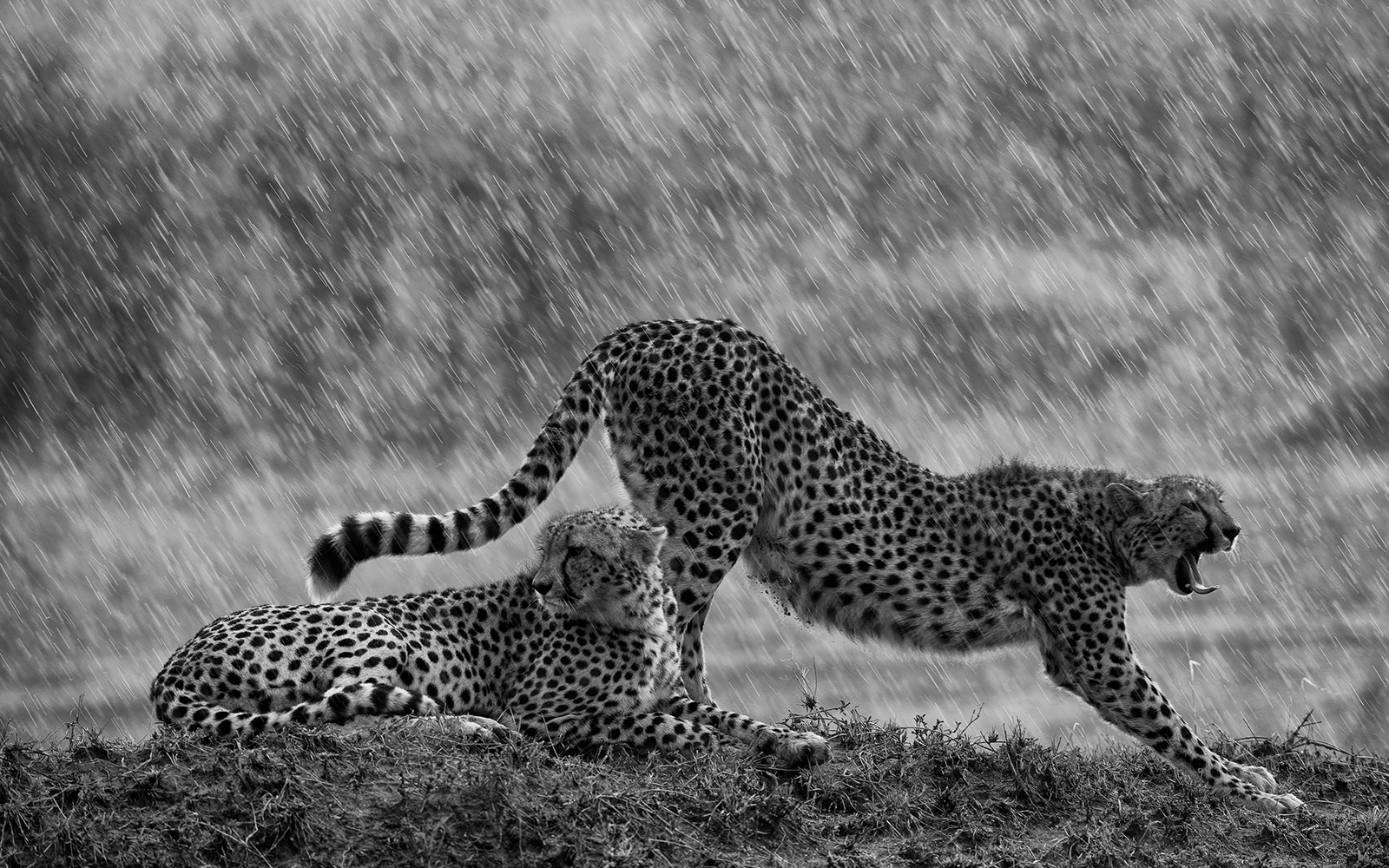 “Two cheetah brothers getting drenched during a heavy downpour in the Maasai Mara.” ~ Shivang Mehta 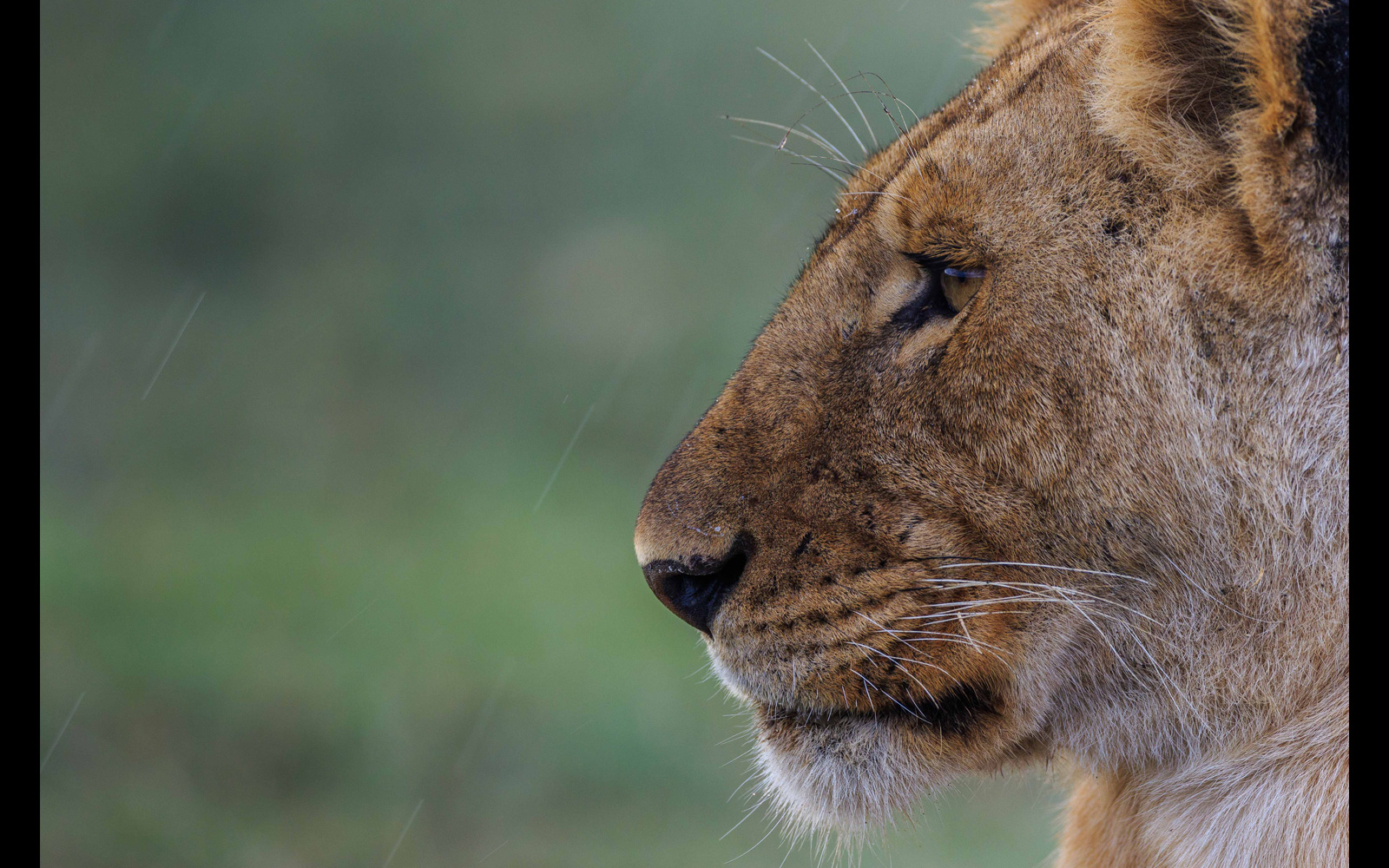 “This photo was taken in the marshes of the Ndutu region. It was already evening and raining, and a pride of lions lay in the grass awaiting the arrival of the wildebeest. This particular lioness has risen to search the area for prey.” ~ Thorsten Hanewald 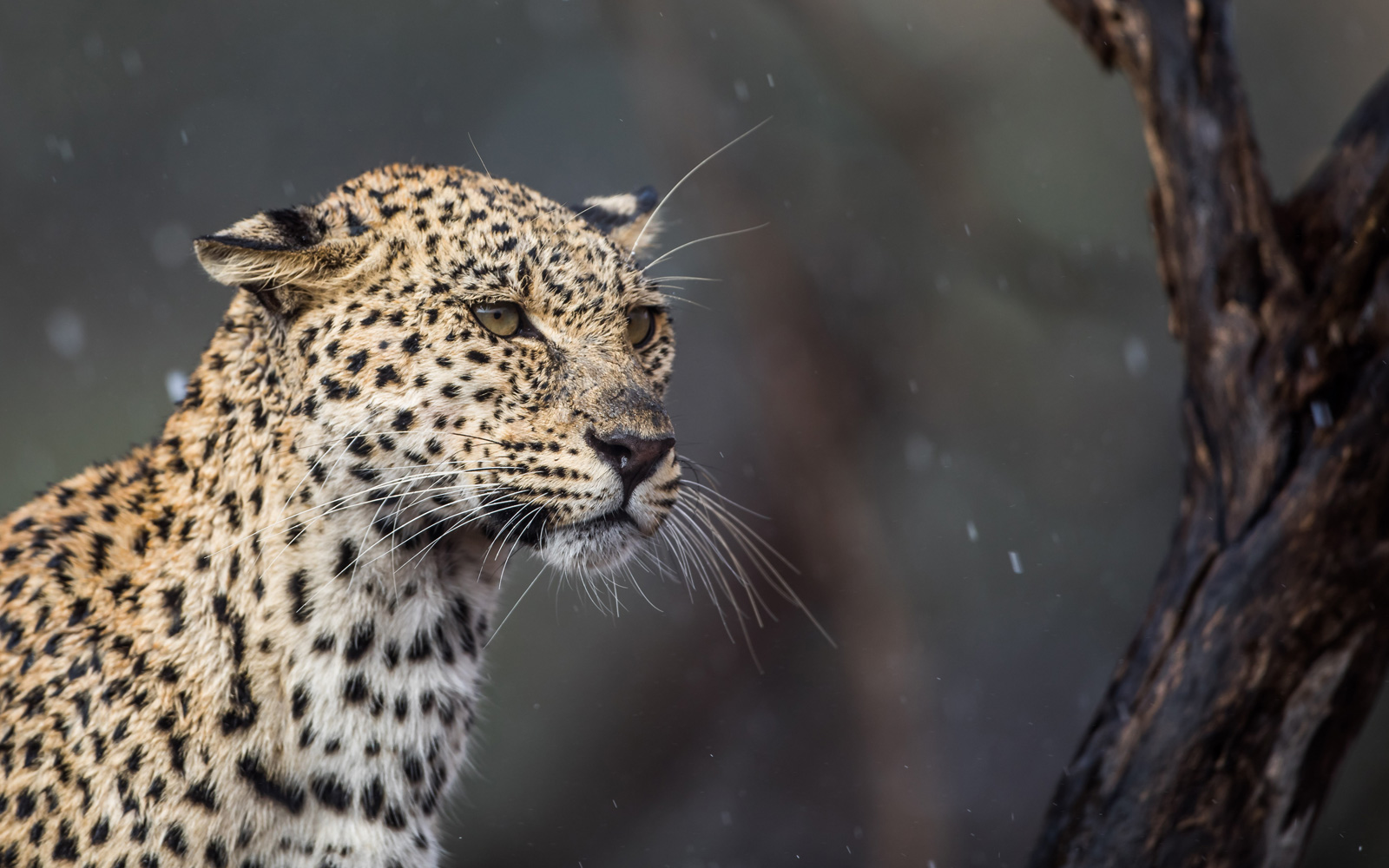 “This female leopard was photographed while hunting in the pouring rain in the Kgalagadi.” ~ Willie van Schalkwyk 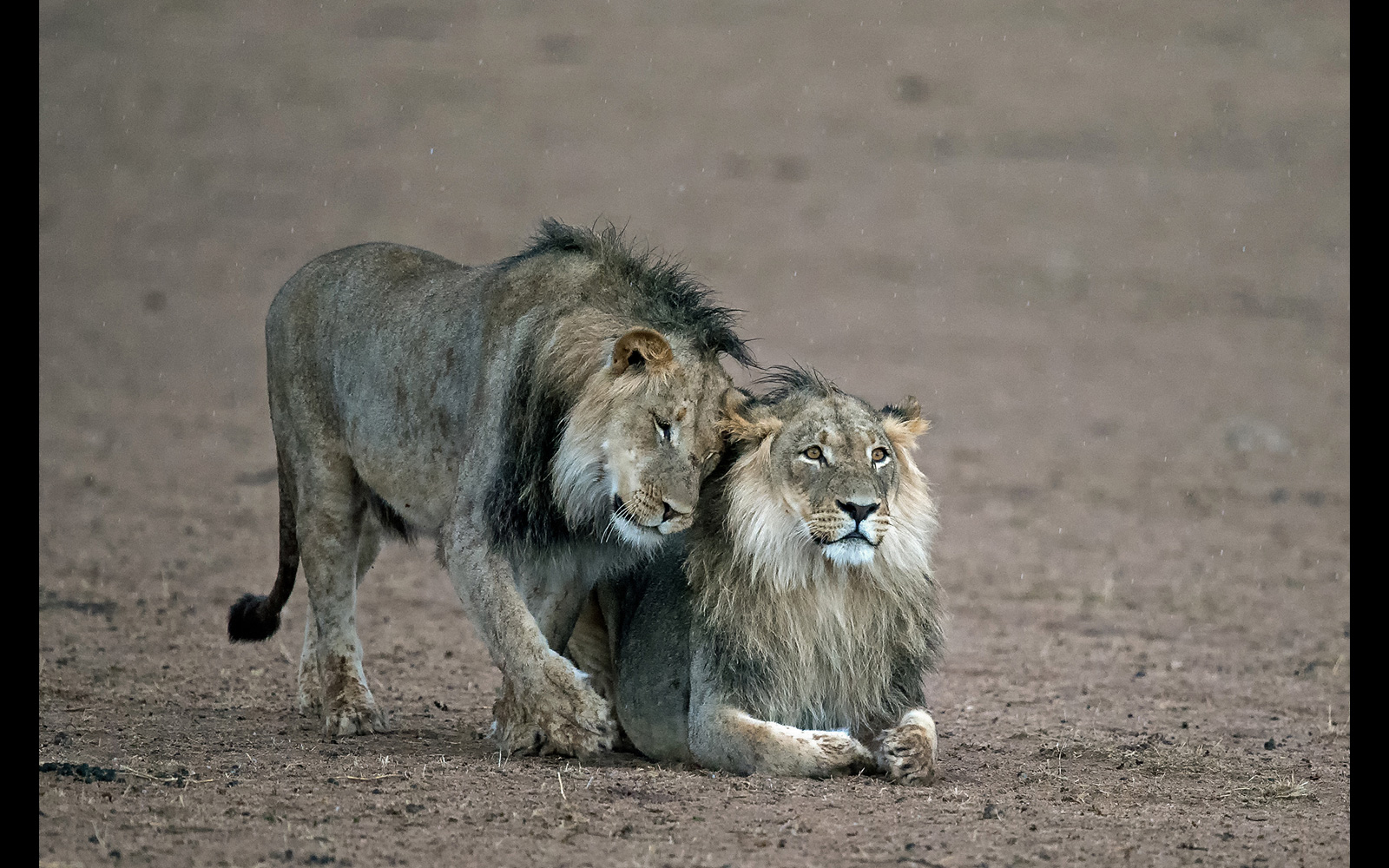 “Lion brothers during an affectionate greeting in the rain.” ~ Johan J. Botha 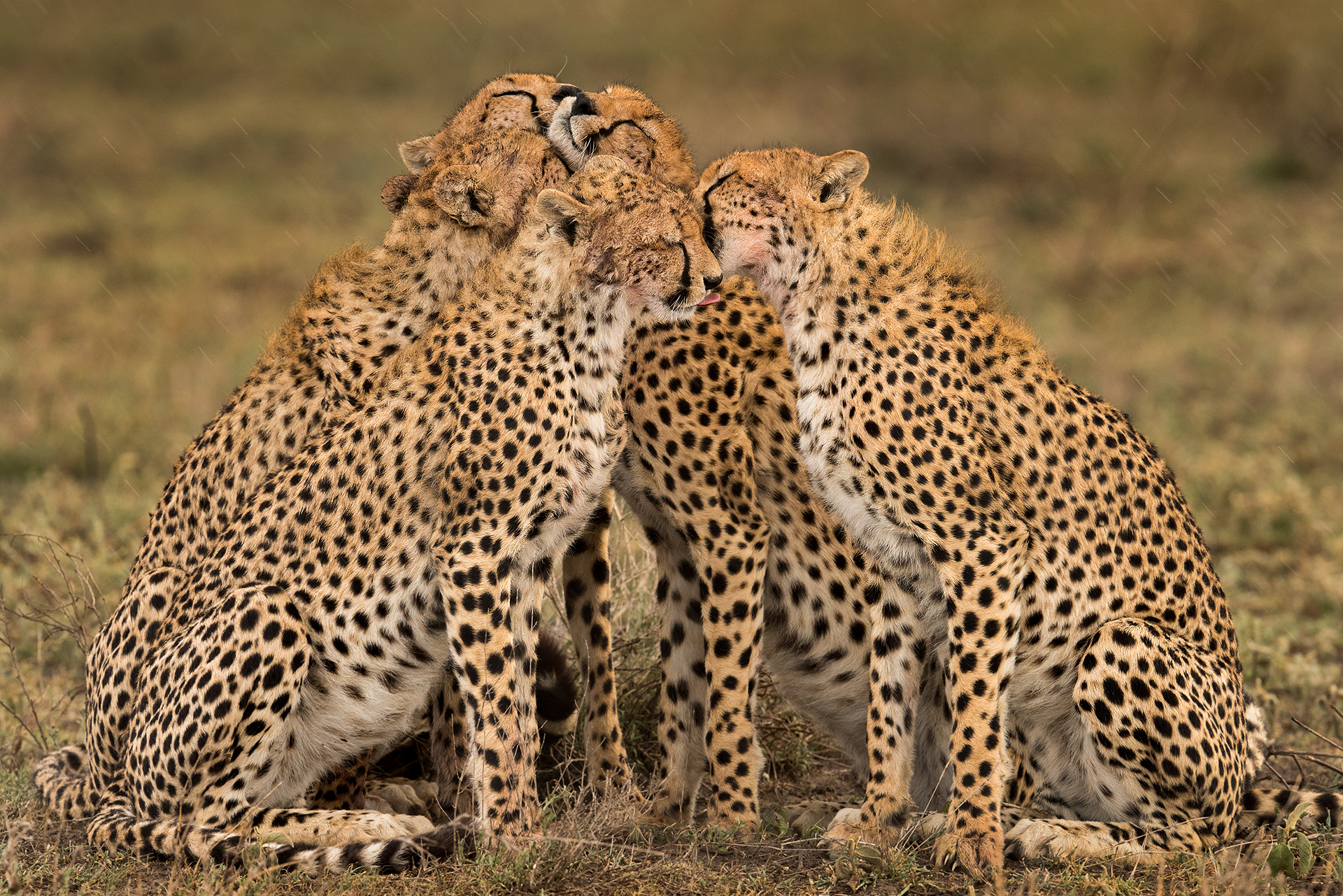 ?  “Licking party” – a mother and her four cubs in the rain in Ndutu, Tanzania © Roie Galitz (Photographer of the Year 2018 Semi-finalist)

“It is not easy, and quite rare these days, for cheetah mothers to successfully raise all of her cubs to adulthood. They must overcome major struggles, like habitat loss, climate change and droughts. This is why I was so happy to capture this delightful sight of a mother and her four grown cubs coming together to celebrate the welcomed rainfall, after the long hot days in the savannah of Tanzania.” ~ Roie Galitz 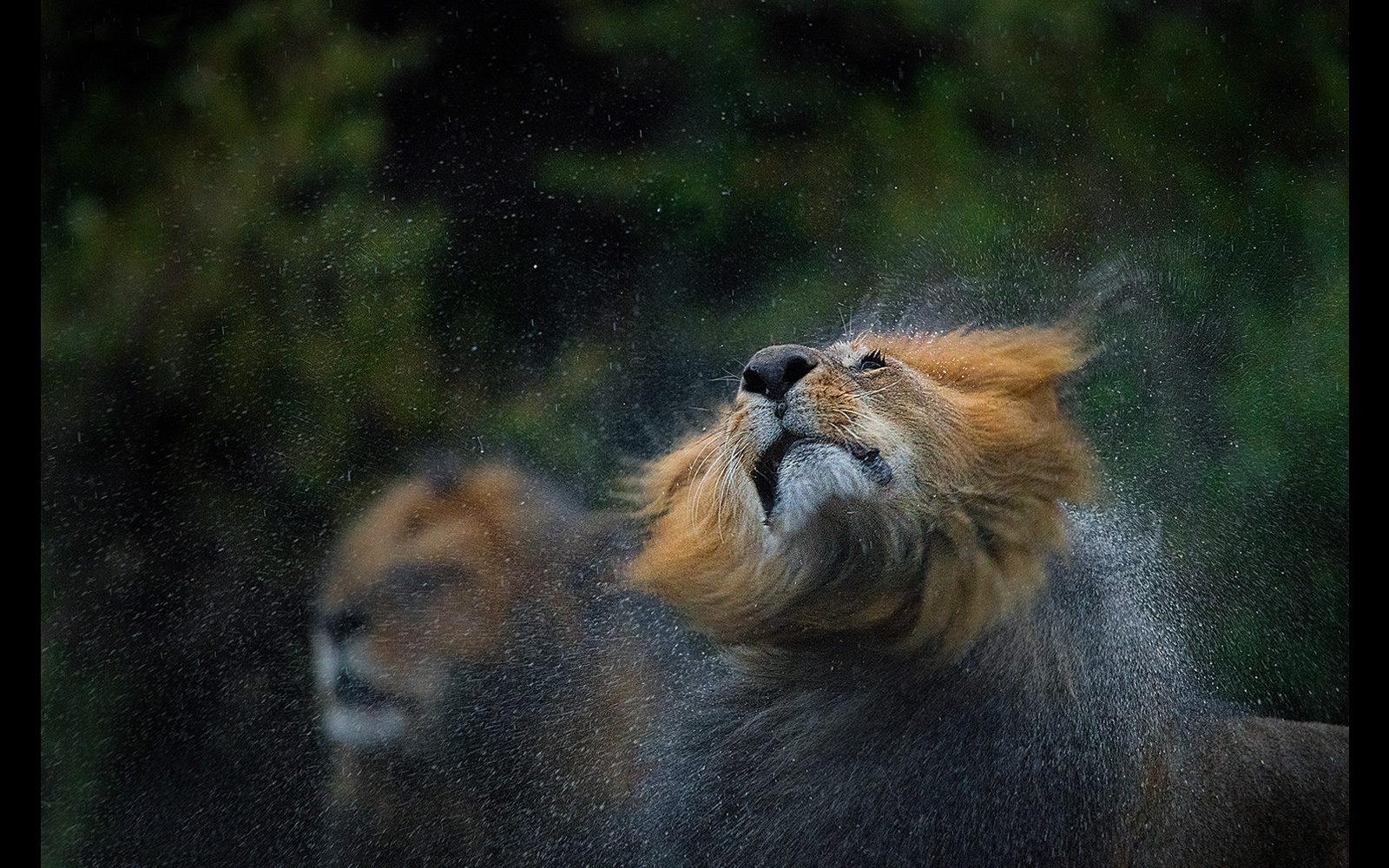 “It was a rainy day in the Maasai Mara, and we were lucky to be in the right place at the right time, as these two lion brothers gave us some amazing photographic moments in the rain.” ~ Subhash Nair 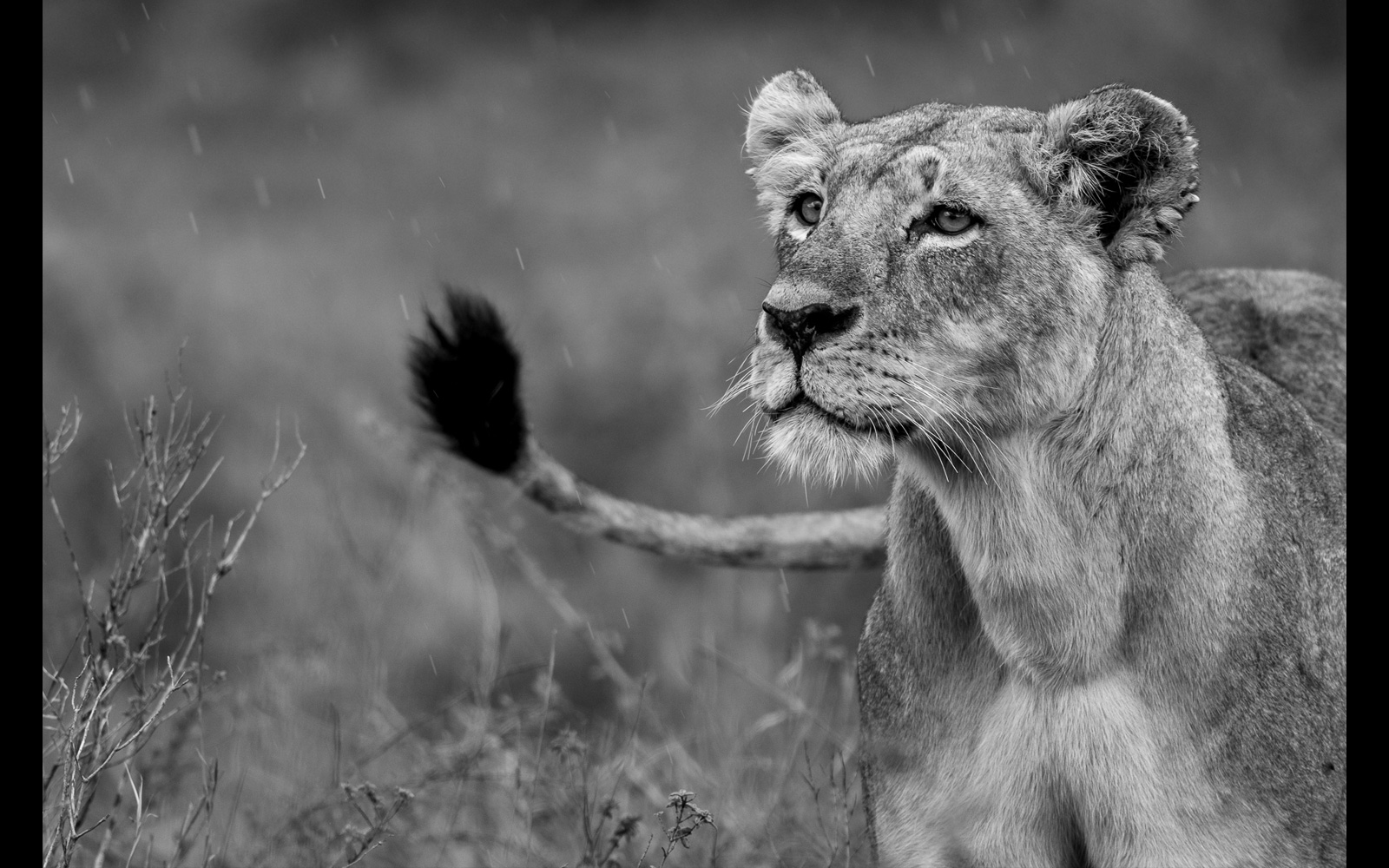 ?  Lioness in the rain in Nairobi National Park, Kenya © Nagaraj Tilakraj (Photographer of the Year 2018 entrant)

“It was a Sunday family outing in the Nairobi National Park. After witnessing the beautiful early morning sunrise and a day-long drive throughout the park, we were on our way back when we saw two lionesses with their five cubs playing. I started to take photos when it started drizzling, though the rain didn’t stop them from playing. However, one of the lionesses then stood up – she seemed to have mixed emotions on her face. It was that moment, captured in this photo, that I will never forget.” ~ Nagaraj Tilakraj 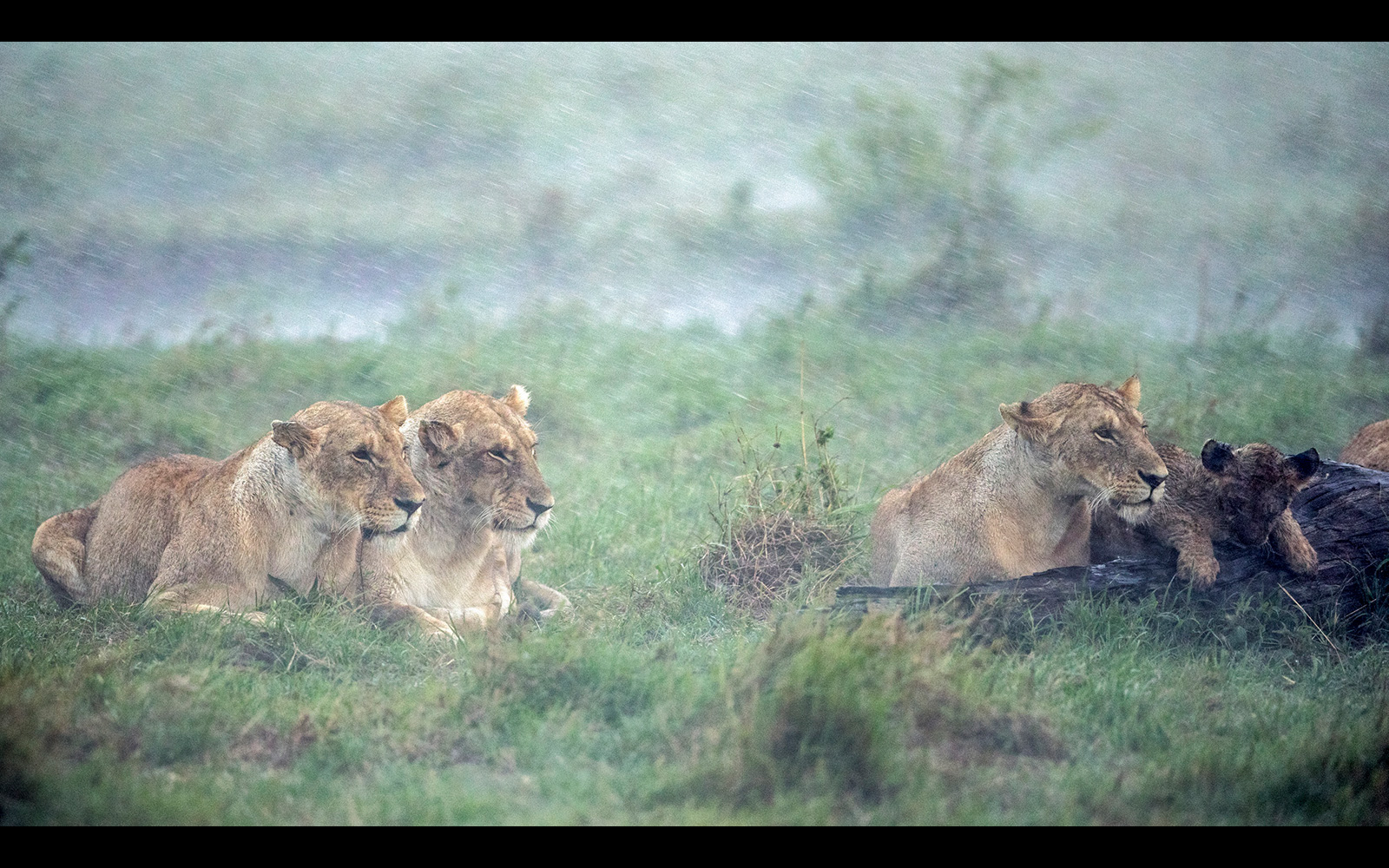 The wet or green season in the Maasai Mara happens from November to April. In this season there are two rainy periods: the short rains in November and the heavy rains in April and May. Many lodges and camps may close over the heavy rainy period because dirt roads turn muddy, rivers flood their banks, and visitor numbers are lower. 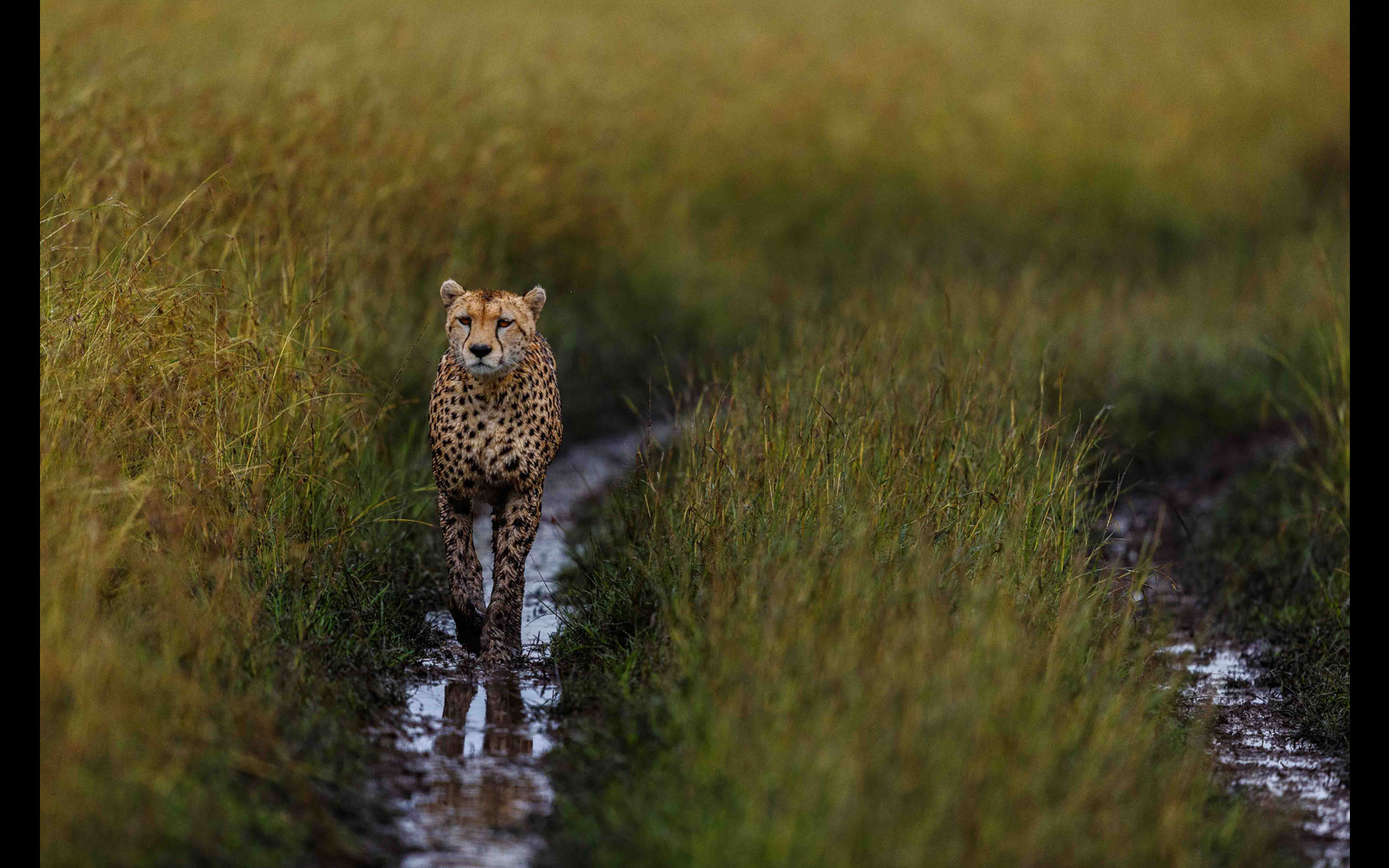 ?  A cheetah walks in the rain in Maasai Mara National Reserve, Kenya © Thorsten Hanewald (Photographer of the Year 2018 entrant)

“This photo was taken in the Maasai Mara during the rainy season. The grass was extremely high and the trails muddy, and I spotted this cheetah using the trails to move about.” ~ Thorsten Hanewald