Posted on December 14, 2020 by teamAG in the Decoding Science post series.
ShareTweetPinEmailShareShareLinkedIn 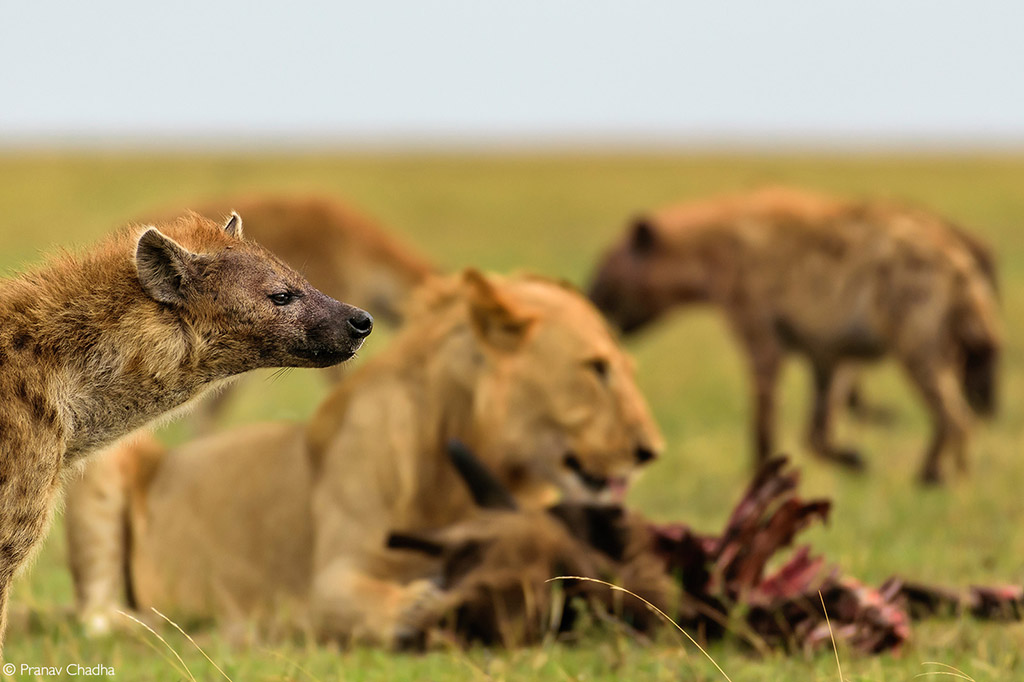 Lions vs hyenas. The fractious and competitive relationship between lions and spotted hyenas is well-documented and has been observed across Africa wherever the two species are present in the same place. These dynamics are fluid, and the dominant species in any individual scenario is determined mostly by numbers and, in particular, the presence of male lions. While both species are active predators, lions and spotted hyenas will readily steal kills from the other (kleptoparasitism), as well as compete to scavenge on existing carcasses. Now, researchers from the University of Grenada have further unravelled the dynamics at play between these two apex predators in closed-system reserves in South Africa.

As a general rule, previous research into how lions and hyenas share food resources, as well as the mechanisms that reduce the effects of this competition, have been focussed on living prey and kleptoparasitism. Here researchers expanded this to include other shared food resources, providing insight into their dynamics in a true scavenging sense in that either lions or hyenas did not kill the carcass/carrion concerned. As the authors explain, this research is particularly relevant for in small, fenced protected areas where populations of apex predators are growing and competing over restricted resources.

For two years, researchers observed the interactions between lions and spotted hyenas feeding on carcasses in Hluhluwe-iMfolozi Park, as well as the feeding behaviours of spotted hyenas in Mkhuze Game Reserve (where, at the time when the research was conducted, lions were not present). Researchers used a range of carcasses of different sizes, including chickens, medium-sized antelope, buffalo, rhino, and elephant and monitored the feeding activity through the use of motion-triggered cameras. (None of the animals concerned apart from the chickens were killed for this study and most of the larger animals were found dead on the reserve). 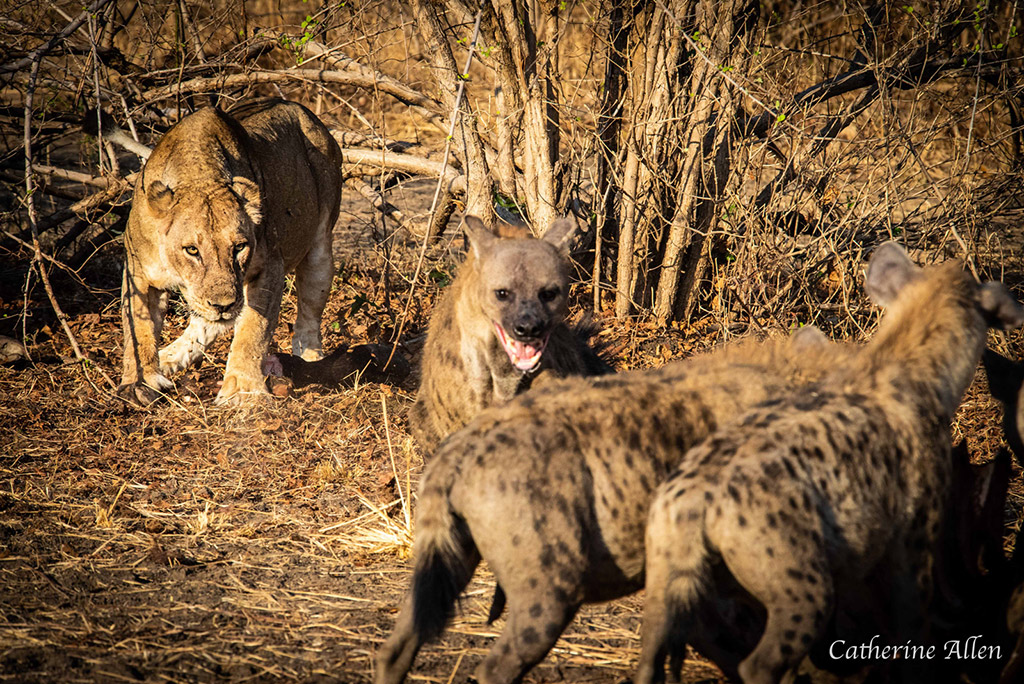 The results of their research indicate that, as was expected, both spotted hyenas and lions will show high levels of scavenging where carrion is available. However, the lions showed a distinct preference for larger carcasses, ignoring the smaller carcasses almost entirely. Naturally, the larger the carcass, the greater the likelihood that both spotted hyenas and lions would be present, as these larger carcasses last longer and present greater opportunities for exploitation. Small and medium-sized carcasses were almost exclusively eaten by hyenas, which occur at higher numbers and, therefore, are more likely to find and consume the carcasses before the lions.

Interestingly, researchers found clear evidence that spotted hyenas modify their behaviour depending upon the presence of lions in a particular area. Where lions were present, the spotted hyenas showed increased levels of diurnal activity – presumably as a mechanism to reduce competition with the larger cats. Yet where lions were absent, the spotted hyenas became truly nocturnal. Observations around large carcasses indicated that the lions were the dominant of the two species in most cases for two reasons: the hyenas typically did not have sufficient numbers to displace the lions, and there was usually at least one male lion present at large carcasses. Instead, the hyenas would wait until the lions moved away to rest or drink before feeding. Hyenas were also more likely to detect carcasses faster if lions were present.

The study concludes by emphasizing the importance of understanding food resource usage and competitive behaviour between lions and spotted hyenas, particularly in closed reserves with relatively high predator densities. In particular, the presence of megaherbivore carcasses can help to mitigate the effects of lion/hyena conflict and competition and favour their coexistence in restricted areas. 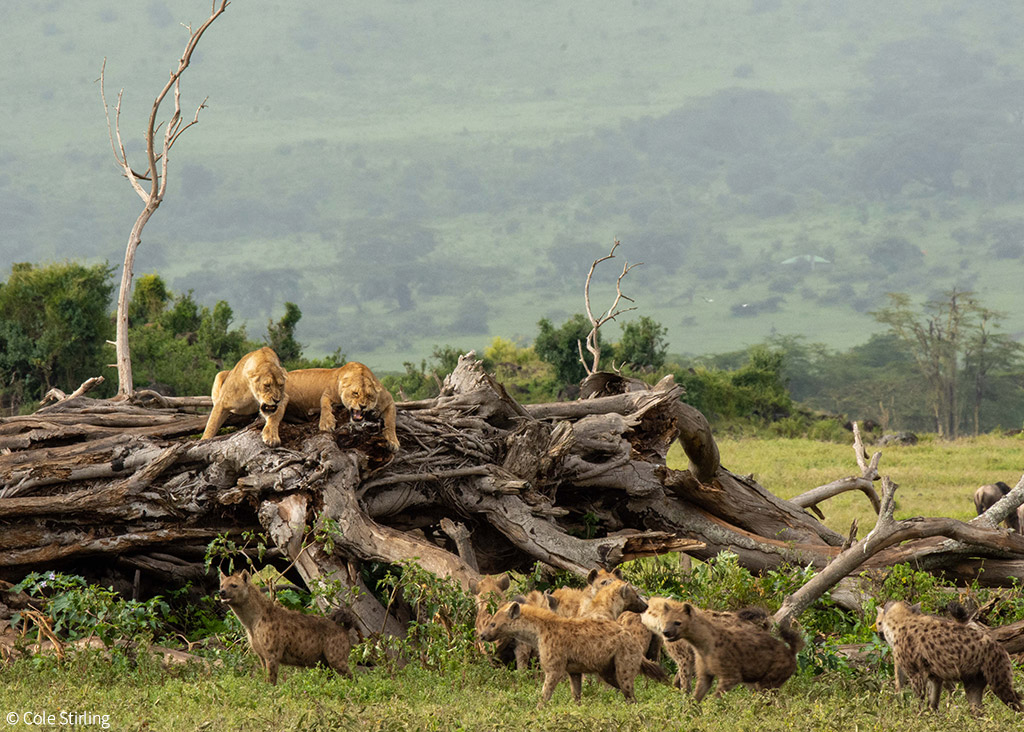 The full study can be accessed through a paywall here: “Hyaenas and lions: how the largest African carnivores interact at carcasses”, Amorós, M., et al (2020), Oikos