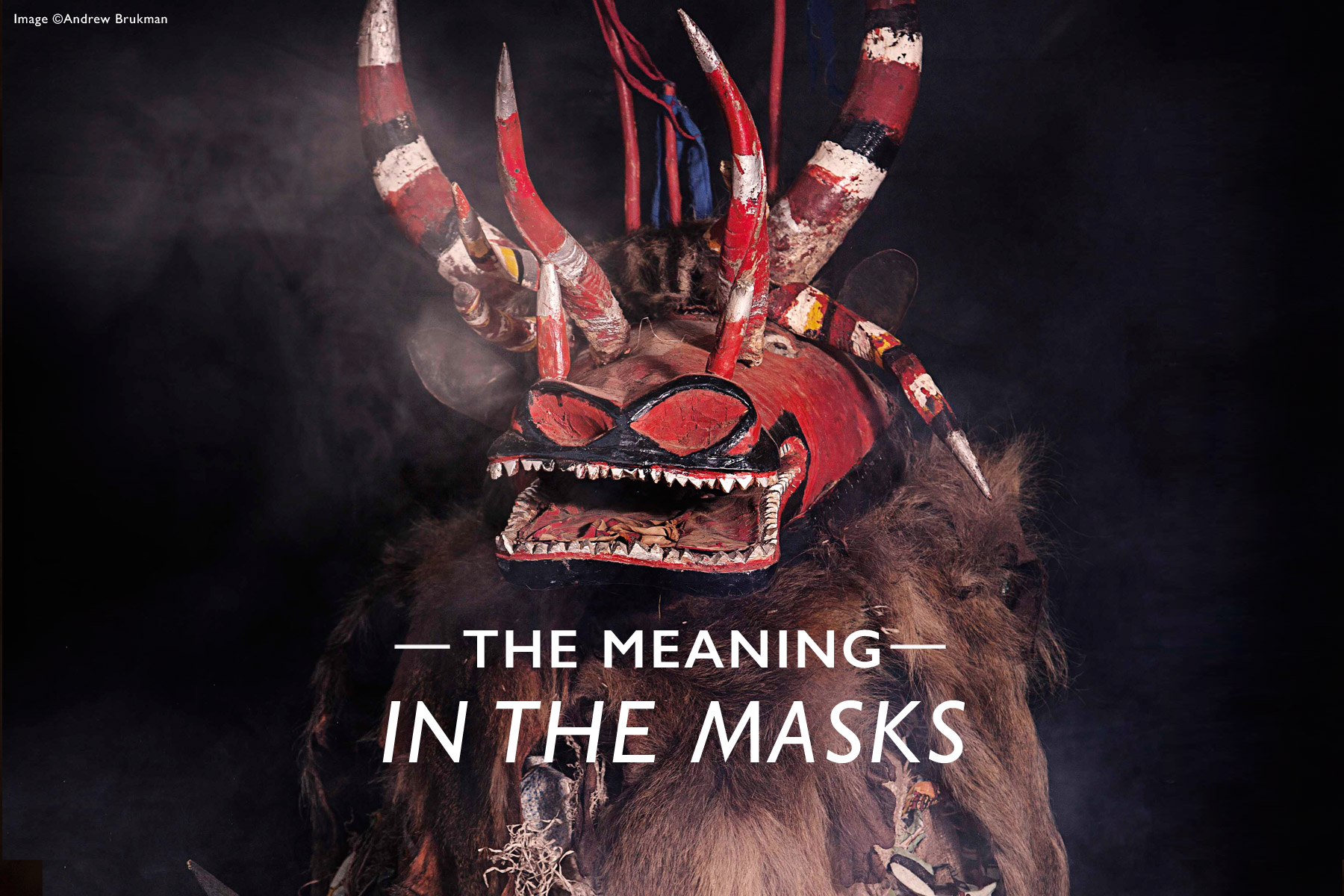 WEIRD AND WONDERFUL
CHARACTERS IN ONE OF AFRICA’S
GREAT MASQUERADES

In the gule wamkulu, or great dance, hundreds of different characters guide society in the moral code of the Chewa people. Some are in the shape of animals, some are roughly humanoid, and some are completely outlandish. Here are but a few of the central characters and the meaning behind their masquerade. 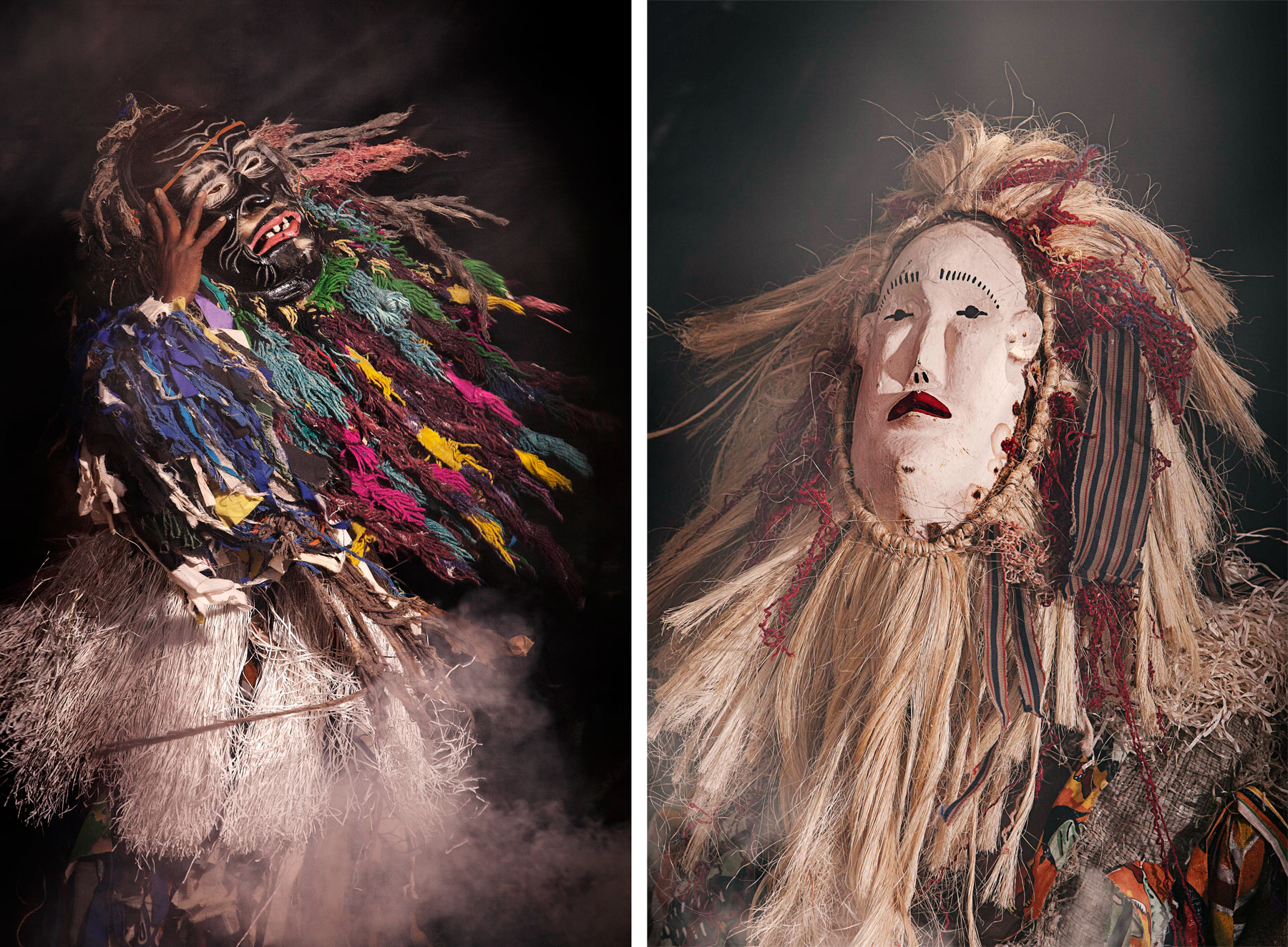 (L) Chadzunda is the ancestor of all the other characters. His great age, which is shown by his wrinkles and missing teeth, belies his virility, power and energy. (R) Maliya, the wife of Chadzunda, is deeply connected to the Christian Mary. Although she dances to illustrate sexual taboos, she is also very sensual towards her husband so displaying the sanctity of intramarital sex. She is the perfect wife. Images ©Andrew Brukman 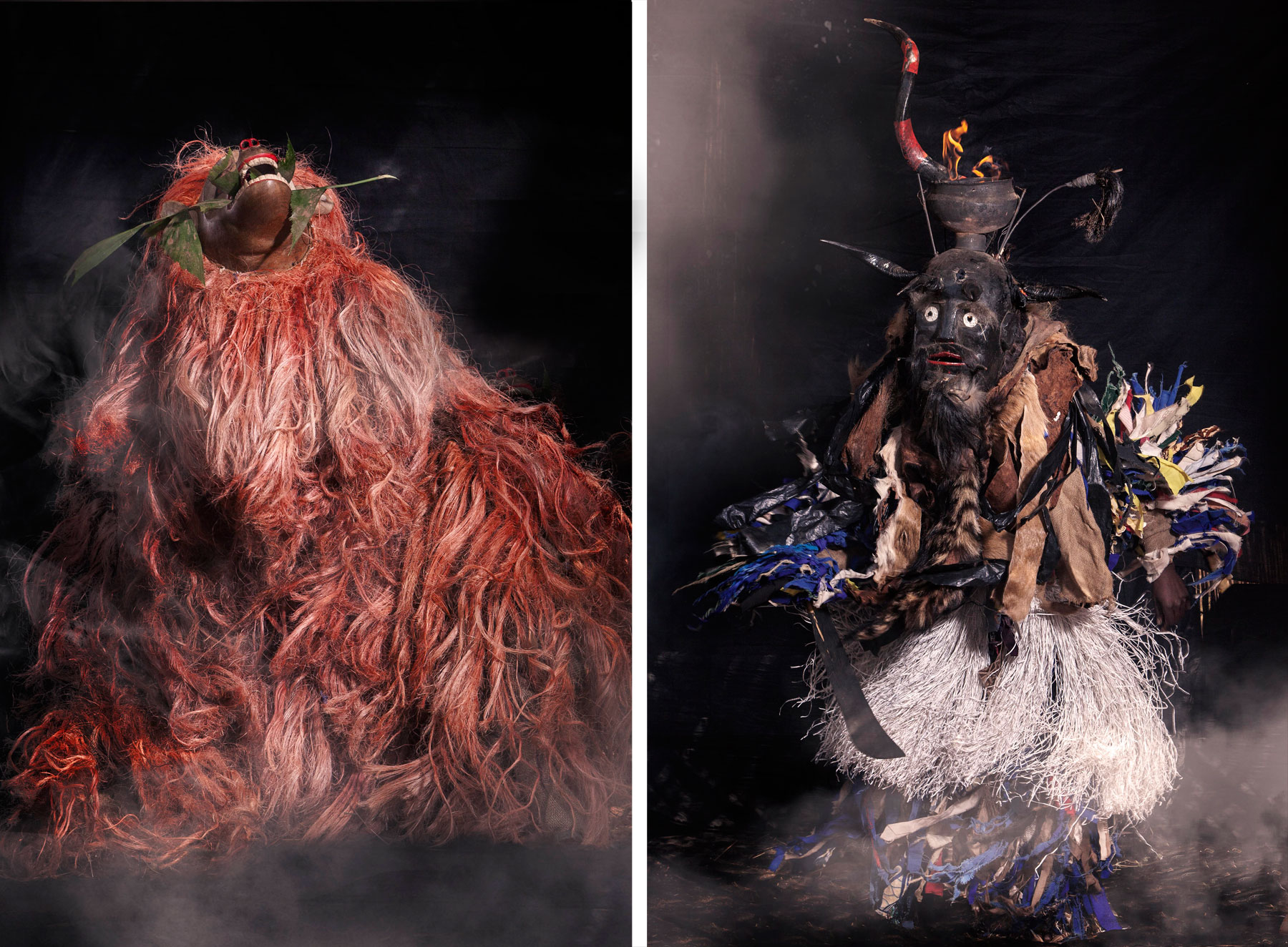 (L) Matako alingana (the buttocks are the same) is a baboon-like character that jumps around and behaves promiscuously to – ultimately – teach people that there is no point in sexual infidelity because, basically, all people are the same when you “get down to it.”
(R) Mbaula appears to be generous, even allowing people to make food on his burning head, but really he uses his pseudo generosity as a way to impose obligations on others, and to further exploit them. Images ©Andrew Brukman 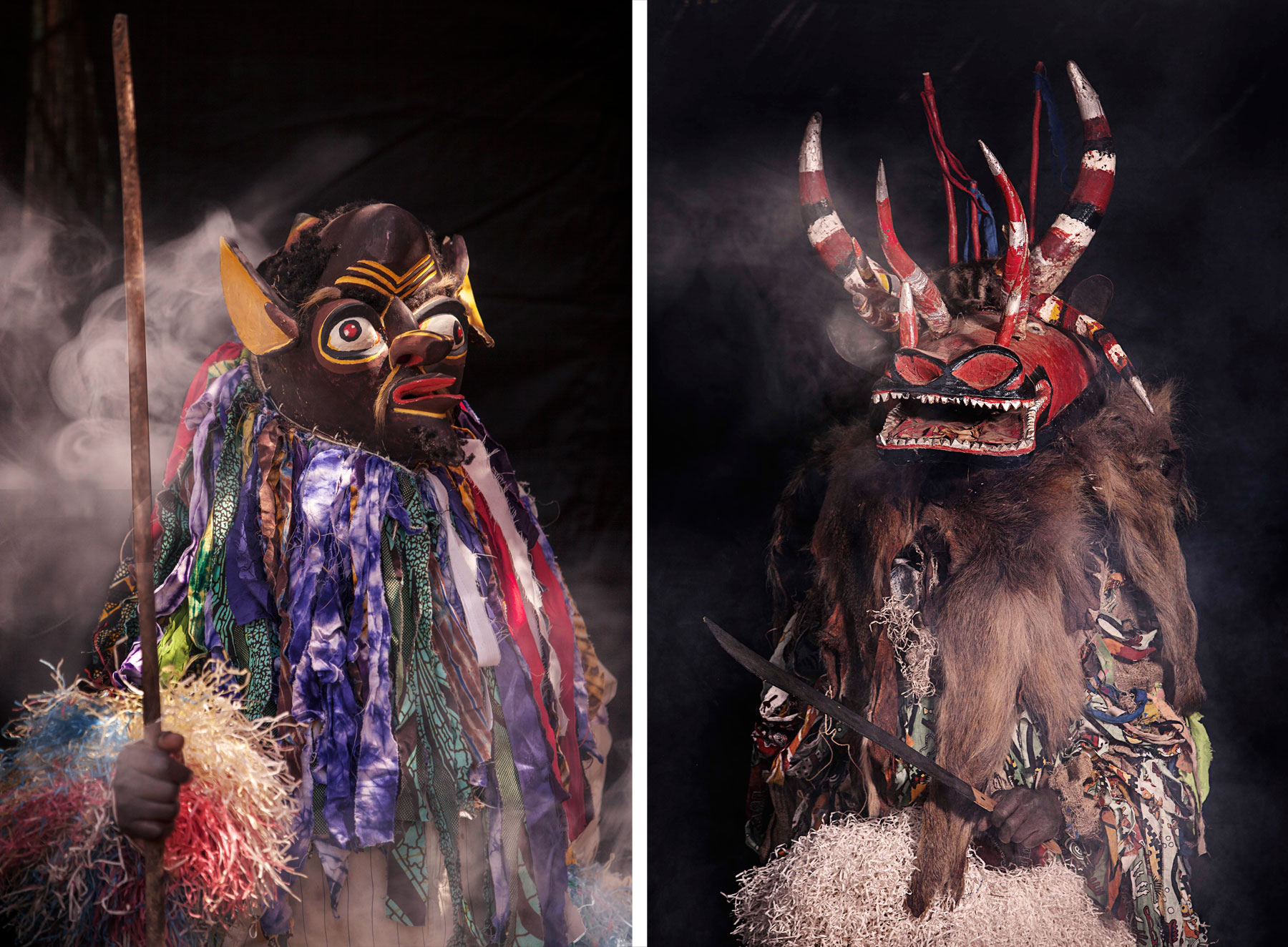 (L) Magwiragwira – Mr Grab-Grab, is a thief who has stolen protected property, which has made him sick. His nose, like Pinocchio’s is growing longer from his disease and bad deeds. He symbolises the fact that bad deeds follow their owner, and the evil you do can turn against you.
(R) Chuma cha ana is a multi-horned mask that teaches about inheritance and warns of the greed of the extended family over the nuclear family. This mask, or character, is relatively new, and dances at funerals where there is some conflict over inheritance. Images ©Andrew Brukman 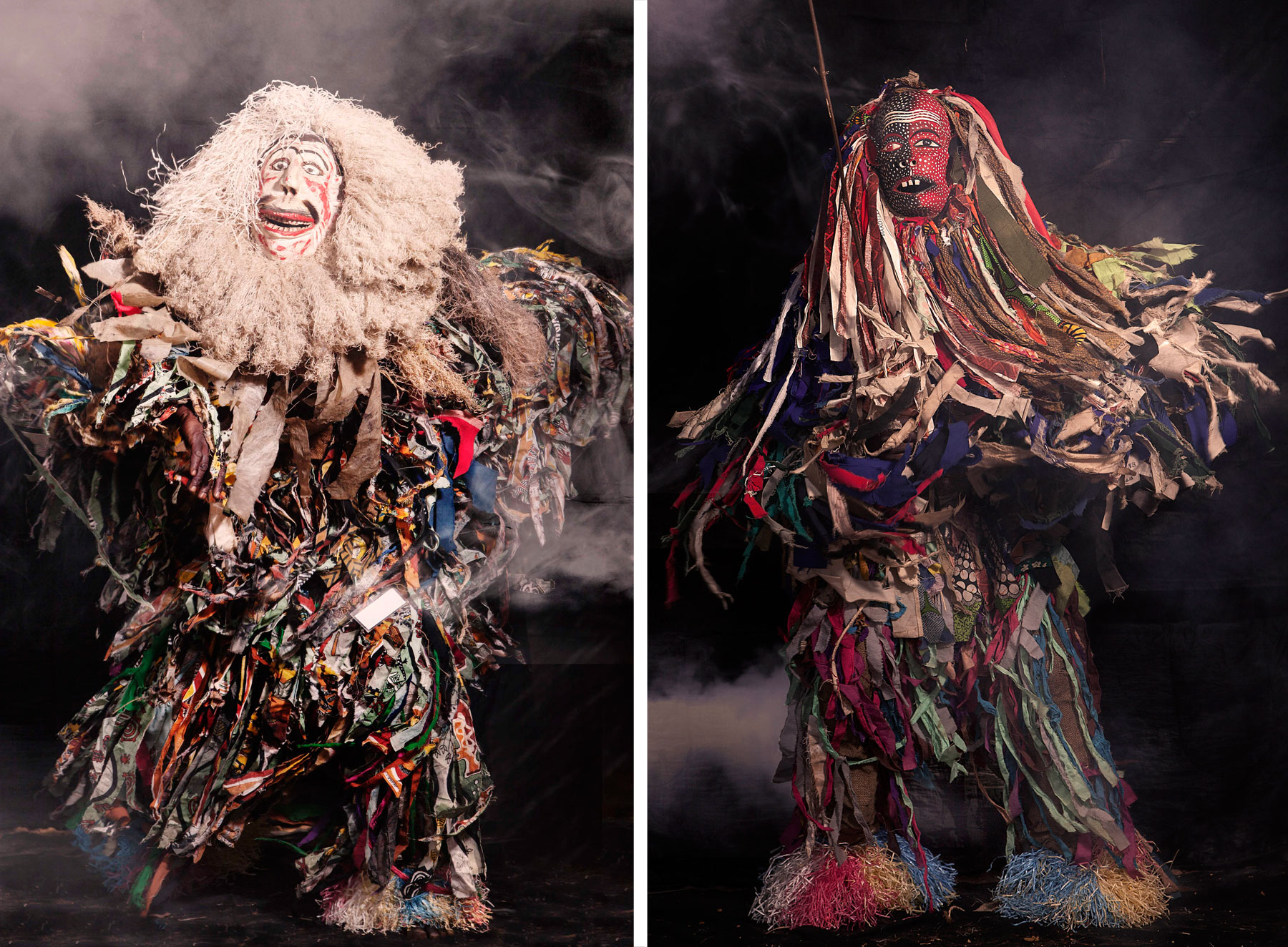 (L) Adapundula looks a little under the weather – and he is. He is a warning against the improper use of magic, because it will cripple you – and make you sick.
(R) Bonya is a type of fish that is smaller than a usipa (which is the size of a tiny sardine) and that is not very nutritious and sometimes makes people sick – but it is cheap. So this mask or character warns against buying cheap imported goods instead of well-made traditional goods. Images ©Andrew Brukman 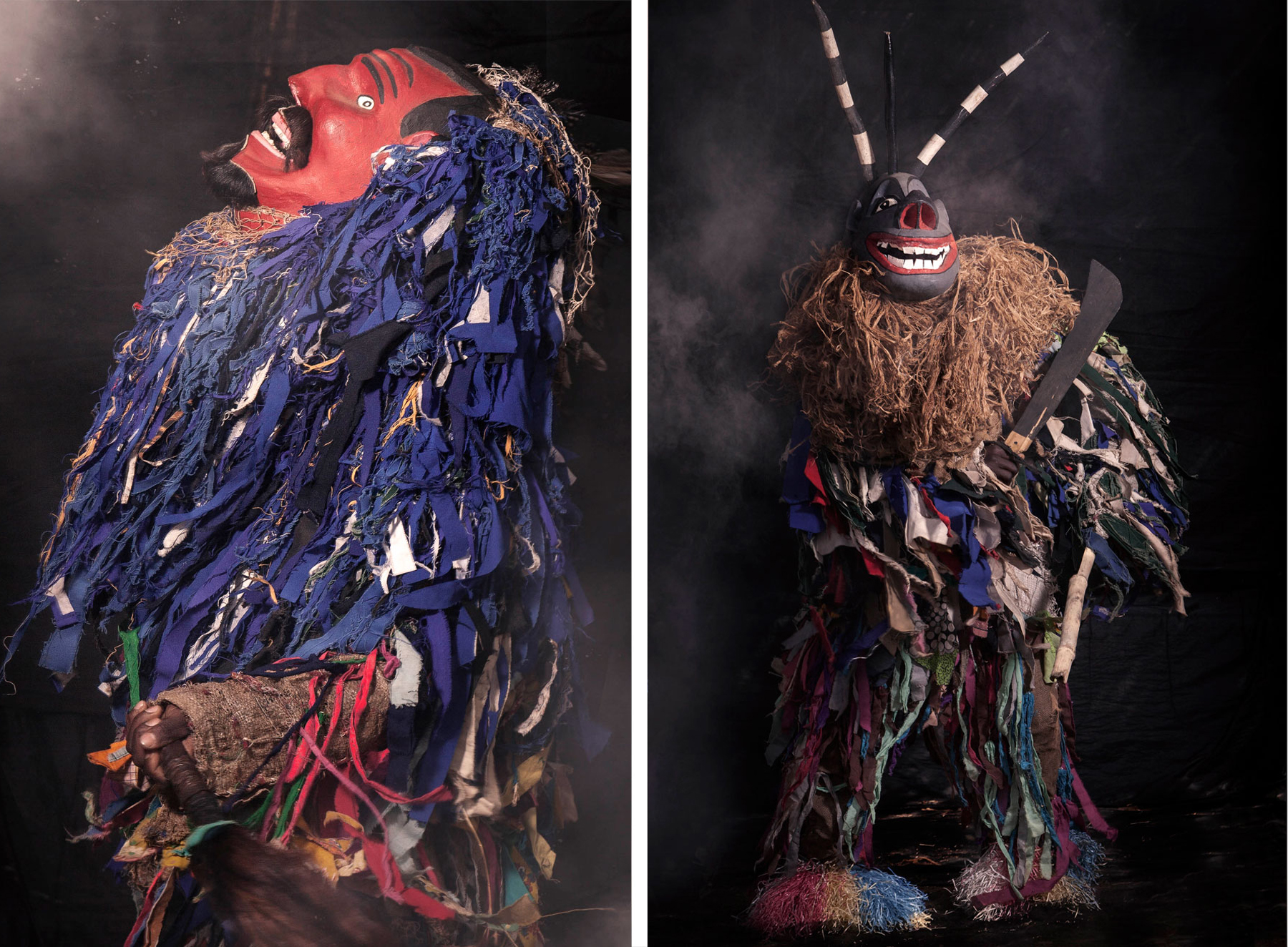 (L) Mandevu, also called Chigayo or Wokwerakwera, symbolises a foreigner or stranger to the village. His red face, long nose and beard indicate someone of European extraction. He sometimes rides a bicycle or carries a radio, and his purpose is to warn villagers to use caution when adopting modern practices or using new-fangled devices.
(R) Chimbano – the bull that keeps jumping out of the kraal and represents an unfaithful husband. This mask is used to emphasise the need for sexual fidelity in marriage and for abstinence before marriage. Images ©Andrew Brukman

ANDREW BRUKMAN is a photographer currently living and working in Cape Town. His roots are in documentary photography with strong influences from conceptual art. While on an adventurous road trip through southern and east Africa, Andrew spent time with Jennifer Stern to photograph Malawi and Zambia’s ‘gule wamkulu’ – the great dance, and more of his imagery can be seen in WHEN THE ANCESTORS DANCE. You can see more of Andrew’s work on his website, www.andrewbrukmnacreate.co.za.