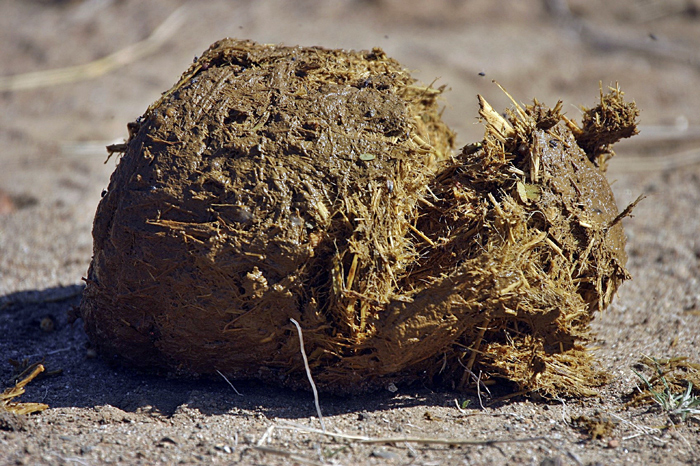 Elephants spend a good portion of each day eating. In fact, these gentle giants consume 150-200kg of food daily – and produce up to 100kg of dung per day.

An estimated 130,000 elephants occur in Botswana, which means that they produce about 13,000 metric tons of manure per day in that country! It is not surprising then, that people have thought up some pretty creative uses for elephant dung over the years.

As the old adage goes: “Waste not, want not!” and here are eight useful ways to make the most of all that poop:

Lighting up a piece of elephant dung to keep the mozzies away might not sound incredibly appealing to some, but I can promise that if you ever find yourself out in the bush with no alternative, the bites on your ankles will quickly change your mind. Luckily just the smoke from burning a dried-up chunk of dung is enough to repel mosquitos, which saves you from having to rub it on your skin. Surprisingly, it also doesn’t have a particularly pungent smell and is less offensive to your nostrils than the average spray-on repellent.

I genuinely hope you’ll never be in a situation where squeezing the last remaining liquid out of fresh elephant dung is your only option. However, for the sake of survival, if you are ever lost with no water in an area where elephants roam, this is a solution; albeit a rather undignified one. Take a handful of fresh elephant dung and squeeze …

3. Mild pain killer and a remedy for a bleeding nose

Because of the large variety of plants that an elephant consumes every day, their dung is a one-stop-shop for traditional healing. In their faeces you can find traces of most of the foliage that a medicine man would use in his treatments. Once it has been lit and the flames have been blown out, allowing it to smoulder, all it takes is one deep breath of smoke and that headache should be gone. As well as curing headaches, dulling toothaches and limiting other pains, elephant dung is known to clear the sinuses and cure bleeding noses. So rather than searching the savannah for the herb or bark used to cure a specific ailment, just consider inhaling some elephant dung instead!

Despite the vast quantities of food that they shove in their mouths, an elephant digests only about 45% of what it consumes. As elephants are herbivores with highly fibrous diets, much of the undigested material passes straight through them as intact fibres. And this is why their excrement can easily be made in to paper products. Today our paper is most commonly made with wood fibre pulp, but a similar pulp can be derived from the fibres in elephant dung. This ‘poo paper’ does have a slightly different texture than what we’re used to, but I would rather write on slightly rougher paper than watch our forests be chopped down.

You’ve probably already heard of those ‘trendy’ (but ethically highly compromised) coffee beans that are passed through the digestive systems of farmed civets. The beans are collected from their stool then washed, dried and roasted by brewers before being sold for ridiculous sums of money. Well, now it seems that someone in Thailand’s Golden Triangle has had a similar idea, but on a much larger scale. Instead of civets, a herd of 20 captive elephants are pooping out coffee beans that are made into coffee. They’re calling it Black Ivory Coffee, and are serving it exclusively in five-star resorts across Asia and the Middle East. As elephants are herbivores (unlike civets) and the fermentation process they use to break down the cellulose in their food brings out the sweet, fruity flavours in the bean and gives the coffee its chocolatey, cherry taste. All traces of bitterness vanish, and it has even been described as a sort of tea-coffee hybrid due to its softness on the palate.

The success of Black Ivory Coffee has inspired an even stranger drink – Un Kono Kuro. The name of this strange beverage is a pun on the Japanese word for poo, which is ‘unko’. Those same beans that were excreted by elephants are then fermented into beer. Its flavour is similar to that of the coffee – mellow and sweet, with its initial bitterness giving way to a hint of chocolate. One satisfied reviewer went so far as to refer to the aftertaste of the beer as more of an afterglow. With such a demand for this novelty alcohol, Un Kono Kuro was so successful that its online store sold out within minutes of its launch.

Sources of green energy are becoming more important by the day. With fossil fuel supplies dwindling and global warming taking its toll, the time to find alternatives is now. Luckily, some zoos and sanctuaries are wising up and starting to make use of the resources right under their feet. With the help of biogas digesters, the waste products of herbivores can be used to generate gas for stoves, heat and even electricity. And as we all now know, thanks to the amount that they poop, elephants are a perfect candidate. As the digesters break down the organic waste, methane and carbon dioxide are collected to be used in stoves or gas-powered engines. Nutrient-rich bio-slurry is also created during this process, which can then be used as a fertiliser.

Alright, this last one isn’t for us humans, but a lump of elephant dung acts as home to many creatures. Scientists know elephants as ‘eco-system’ engineers – which means that they are capable of controlling the availability of resources for other organisms by modifying the physical environment. Many types of insects make these piles of poop their home, including beetles, scorpions, crickets, termites and millipedes. And we all know that dung beetles bury balls of elephant dung after laying their eggs in it. As well as creating a highly-nutritious home for some of the smaller creatures, it also benefits those who would want to eat those creatures. Honey badgers, mongooses, hornbills and francolins will scratch through them, snacking on the bugs and grubs hidden within.

And this concludes our chat about elephant dung. Remember, just because we call something a waste product doesn’t necessarily mean we should waste it.