7 Consequences of replacing wildlife with livestock

Posted on February 5, 2018 by teamAG in the Decoding Science post series.
ShareTweetPinEmailShareShareLinkedIn 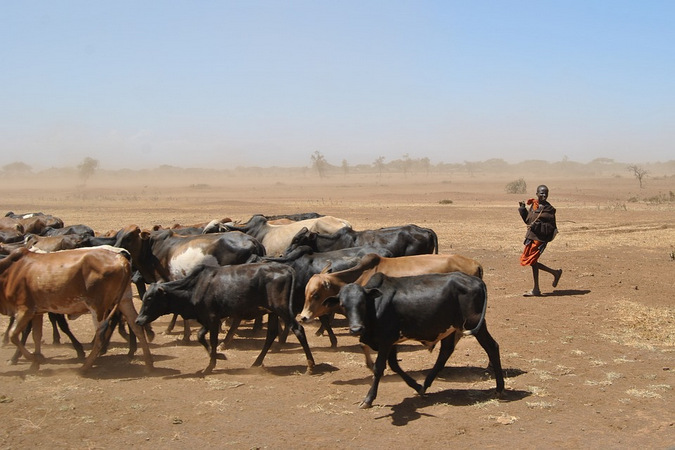 Africa has the largest remaining area of untransformed (uncultivated) land on Earth, but research suggests that the combined impact of increasing human populations and the decimation of native species over the last few centuries by colonial hunters, means that livestock populations now vastly outnumber wildlife.

A fascinating study has been published about the impact on ecological processes and ecosystems of the ongoing extinction of native African herbivore species and the increase in livestock populations. This report compares current data with estimates of herbivore biomass since the Pleistocene period (11,700 years ago).

Total herbivore biomass has decreased across Africa, mainly due to the removal of elephants by hunters. Only arid regions have experienced increases, largely due to the use of artificial water points and forage for livestock.

African rangelands are now dominated by three species – cattle, goats and sheep – which account for 90% of current herbivore biomass. In other words, Africa has undergone a vast contraction in herbivore diversity.  The removal of elephants has had a particularly pronounced impact, due to their beneficial impact on density and diversity of forest saplings and on seed dispersal – but the removal of other specialist browsers and frugivores has also been felt. The result has been an increase in bush encroachment and a reduction in seed dispersal.

Fire is a significant alternative consumer of vegetation to herbivores and the balance between the two shapes ecosystems. Conceptually, grazers can suppress fires when they consume so much grassy material in the wet season that there is insufficient fuel to carry fires in the dry season. Fewer grazers therefore means more fire, and vice versa – all of which is subject to rainfall levels.

Herbivores, directly and indirectly, affect woody cover. The report predicts that the increasing dominance of livestock over native herbivore species will enhance woody cover in African savannas, in addition to other factors such as carbon dioxide levels.

The substantial contraction of elephant distribution ranges and populations has and will result in more woody cover as fewer trees are toppled. Moreover, the increase in grazer densities (livestock) has reduced fire across much of the continent, thereby also increasing woody cover. However, mitigating this to a degree is the increase in small-stock browser farming and subsequent increase in consumption of woody cover.

Carbon is stored above and below ground. The increase of woody cover increases the above-ground carbon stocks and therefore influences the carbon cycle – but the exact extent is not known. More easily measured is the methane emissions of herbivores. Methane has 28 times the warming potential of carbon dioxide. Ruminants (mammals that first partly digest food in one stomach, then regurgitate it and chew it further before re-ingesting it) such as cattle, sheep, antelope and giraffes produce considerably more methane than non-ruminants such as elephants, hippos and zebras. In addition, larger animals produce more methane per body mass. The dominance of livestock in Africa has resulted in a significant increase in methane emissions – up to 15% of the global emission levels.

Animals move nutrients from nutrient hotspots across ecosystems, thereby increasing overall fertility. The dominance of livestock has resulted in widespread loss of nutrient dispersal – with current levels estimated at being less than five percent of previous levels.

The imposition on arid habitats of increased livestock biomass (mostly sedentary), is causing disturbance to vegetation that usually has a seasonal dynamic. For example, year-round trampling and grazing may increase grass tuft mortality and thereby increased soil erosion by wind and water, and reduced water infiltration due to soil compaction and greater run-off.

The removal of elephants from mesic habitats holds more substantial ecological implications, by increasing woody growth and reducing movement of nutrients in these typically highly leached, nutrient-poor ecosystems. Humans are replacing some of this elephant functionality by harvesting fuelwood, and currently, woody biomass is reducing over much of the continent, despite the ongoing encroachment of woody vegetation.

The general shift from migratory native to resident livestock herbivore populations represents a ubiquitous distortion of large mammal herbivore ecology. Only a handful of ecosystems now retain the diversity of functional seasonal resources necessary to support large, migratory herbivore populations that can adapt to inherently variable ecosystems. Populations that cannot migrate are more susceptible to drought and are subject to considerable natural fluctuation in herbivore densities.