6 Tips to sketch a cheetah hunt

Posted on April 24, 2017 by Alison Nicholls in the Art of Africa post series.

We found two brothers lazing on a termite mound surrounded by wonderful hanging vines. It was a perfect sketching opportunity, so I spent some time sketching them and then adding the trees, termite mound and vines. The watercolour was added later, purely from memory.

Look at animals as simple shapes, ignoring details. Start with the largest shapes first. Use feint pencil lines until you find the correct line. Always sketch the animals first. You can add the landscape features and vegetation afterwards because they won’t get up and move. 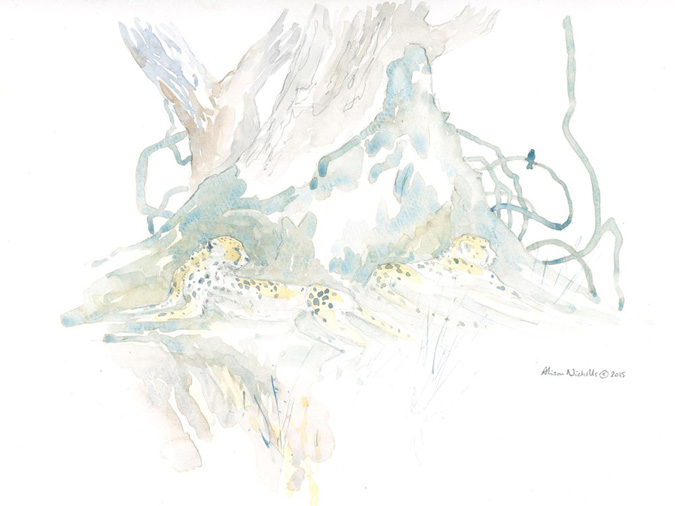 Knowing roughly where they spent the night, we headed out the next morning hopeful that we would see them hunt. We found them lazing on another termite mound and although they frequently moved, I created this sketch (below), using simple shapes and very feint pencil lines.

Afterwards I wondered why I had painted the background yellow/orange, but looking at my husband’s photos from the same day (see below), I realise my colours were close to the real thing – but in reverse. I find this often happens – I think I am consciously choosing colours, only to find I am unconsciously influenced by the colours around me. 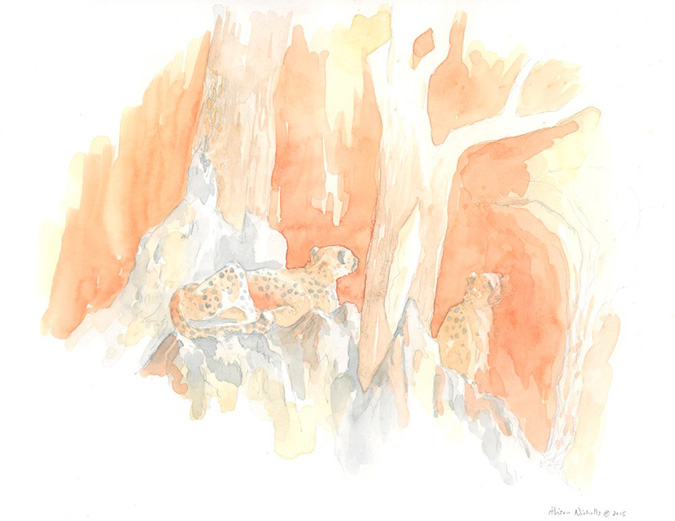 When you are watching, listening or sitting in silence, you are inadvertently learning and taking in information about your subject and this will show in your sketches.

This photo below is one of my favorites. Look at the beautiful curves in the termite mound, the vines, and of course the spots of the cheetah. It is a simple yet stunning composition. 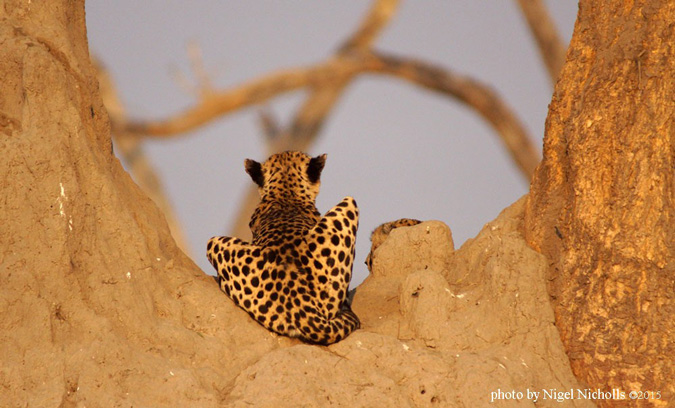 Beautiful though the morning was, the cheetahs were not content with posing for an artist or a photographer – they had food on their minds and started to head off. Although we were moving every few seconds to keep up, I managed this quick sketch (below), showing the cheetahs’ long bodies and tiny heads.

♦ Tip 3: A pencil and paper is all you need. Limiting your materials allows you to concentrate more on your subject.

♦ Tip 4: Make sure you have enough paper and don’t be afraid to start sketches you will never finish. 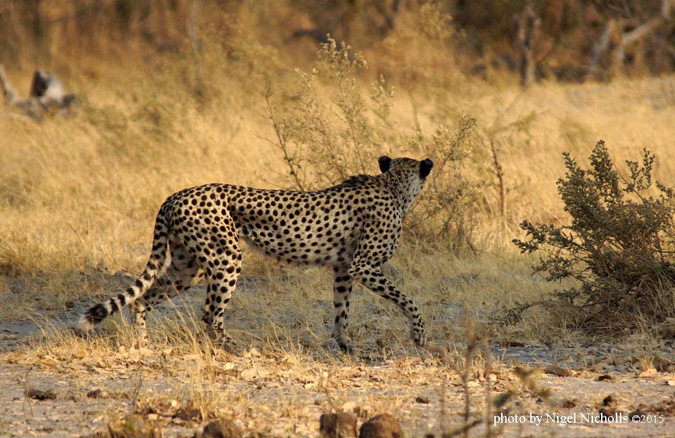 At one point the cheetahs stopped for a couple of minutes and that’s when I created the very small sketch (below). The light was coming from the left, so I had to remember not to paint over the white paper in the areas I wanted as highlights. I added some cadmium yellow to the cheetahs, followed by some cerulean blue on top, to show the shadow areas. When this was dry, I added the eyes, nose and just enough spots to indicate that these are cheetahs.

This is one of the hardest things to learn, but is essential. I often stop when I think I’m not quite finished. When I look at the painting later, I inevitably discover that it needs nothing more. 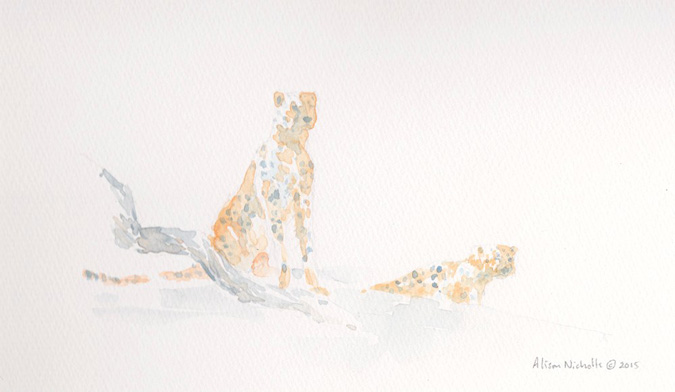 Suddenly the cheetahs went from motionless to trotting to flat-out in just a few seconds and became a blur among the bushes. Sketching was not an option.

As the dust settled we saw the one cheetah had caught an impala ewe. His brother appeared and the impala was quickly subdued. 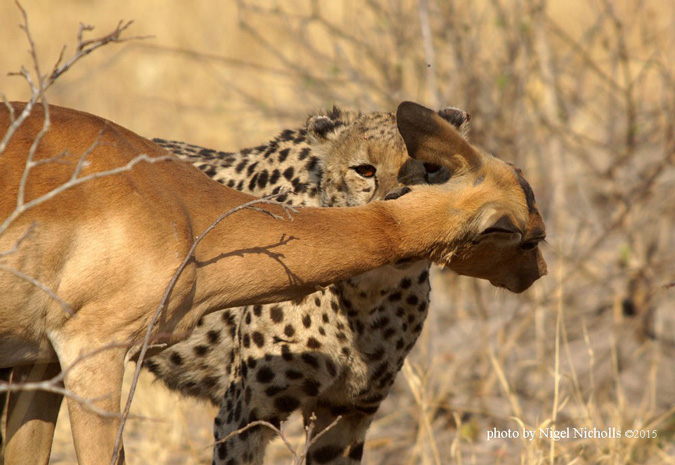 Sketching predators on a kill may not be every artist’s idea of good subject matter, but killing is a fact of life in the bush, so I treat this as I would any other subject, taking advantage of the fact that the cheetahs are now stationary for a while!

The brothers ate from the rear of the carcass, so I had an interesting perspective for my sketch. I concentrated on the important details – the head of the impala, and her round belly leading to the faces of the cheetahs. 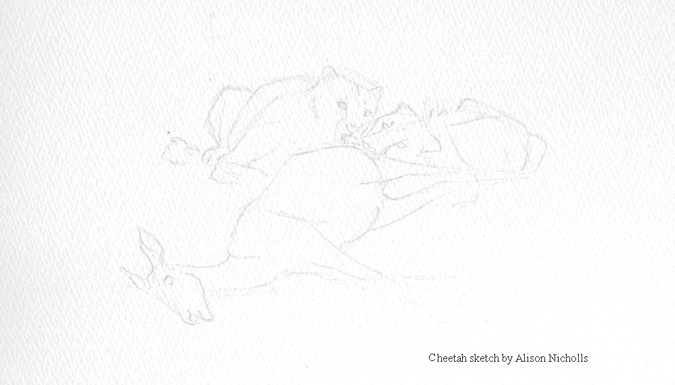 We left the cheetahs to their meal and returned to camp, where I spent a few hours adding the watercolour to some of the sketches you see above. Ah… the work of a field sketch artist is never done!

♦ Tip 6: Join me on an Africa Geographic Art Safari to learn more. I can’t promise we will see a cheetah hunt, but if we do, you’ll know how to sketch it!

Alison Nicholls is an artist Inspired by Africa. She teaches guests to sketch wildlife during Africa Geographic Art Safaris and is a member of Artists For Conservation, the Society of Animal Artists and the Explorers Club. Alison donates a percentage to African conservation organisations from the sale of every painting, field sketch and limited edition reproduction.