Uncovering the remains of an ancient civilisation at the Gede Ruins

It was day seven of my 14 day trip up the coast of Kenya, something I like to do every year. This particular day found us on a journey to ‘discover’ the Gede Ruins (also referred to as the Ruins of Gedi). Written by: Rachel The Gede Ruins are the remains of an ancient Swahili town, located in Gede which is a village that lies 16km south of Malindi and approximately 90km northeast of Mombasa. A visit to Gede takes you back to a 12th-century Swahili civilisation. Excavations reveal a thriving trade with people from all over the world, including far-flung places such as China. Various items excavated from the ruins can be viewed in the museum on site. Gede traces its origin to the 12th century but was rebuilt within the 15th and 16th centuries, evidence of an increasing population from the surrounding villages and towns. The mosques, palaces, houses and other structures demonstrate the abundant growth of wealth that was enjoyed by the townspeople until it reached its peak in the fifteenth century.

The reason why the dwellers abandoned this once thriving town is still shrouded in mystery. Studies of the ruins suggest some of the factors that led to Gede’s eventual demise include the Wazimba raid along the East African coast in 1589, the removal of the Sheikh of Malindi and the Portuguese to Mombasa in 1593 and the ever-present threat of a raid by the Galla, a hostile nomadic ethnic group from Somalia. Archaeologists have also found that the inhabitants deepened the well outside the Great Mosque, an indication that the water table was growing significantly harder to reach, leaving the people without a vital resource. 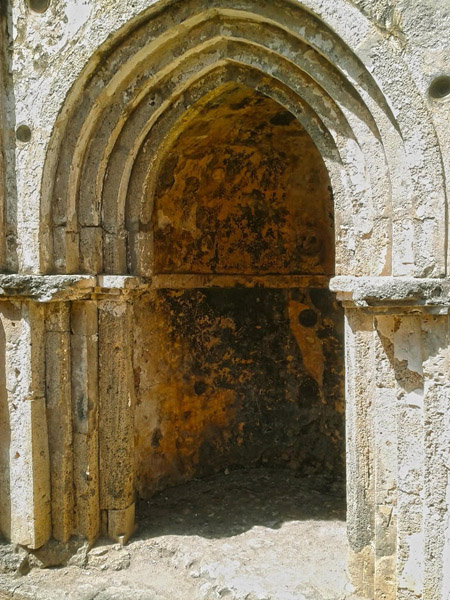 After narrating the fascinating history of the Gede Ruins, our guide proceeded to show us the three residential zones that defined one’s social strata. There is an outer wall and an inner wall. The poor lived outside the outer wall, the middle class lived between the outer and inner walls, while the rich obviously lived within the inner wall.

We then proceeded to the tree house. The experience was a bit scary with rickety-looking steps but well worth it. You get to view the ruins from a great vantage point. 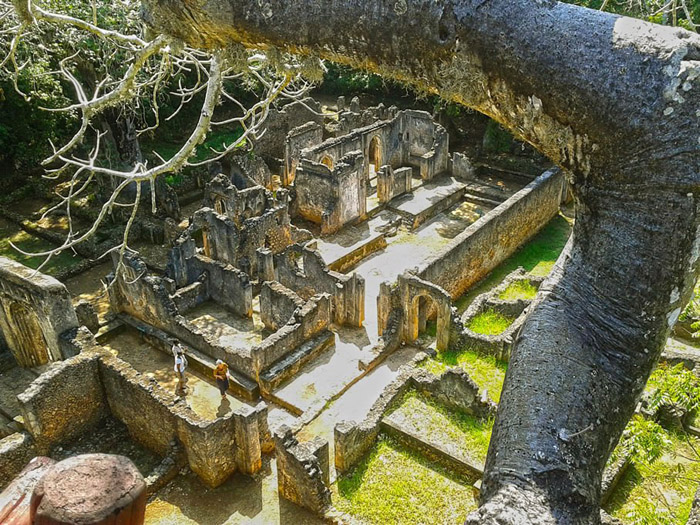 After walking through the ruins, we ended up at the on-site snake sanctuary that rescues snakes that wander into the village and rehabilitate them in the forest away from people. I saw four spitting cobras, a black mamba, two green mambas, a boomslang, a viper and several pythons. The guys at the snake park are very passionate about protecting the snakes and the surrounding forest habitat. Additionally, the ruins are teeming with wildlife, I spotted a huge golden-rumped elephant shrew, countless Sykes’ monkeys, butterflies and many birds, including the gorgeous Verreaux’s eagle owls.

A visit to Gede should definitely be on your bucket list. Wear some comfortable shoes, carry lots of water (the humidity can be unbearable) and bring your camera! We also had to pay for a guide. There is no standard fee for one, so make use of your negotiation skills. Having a guide is optional; in fact, you’re free to walk around the ruins by yourself. However, I would recommend getting one as they are very knowledgeable and really make the place come alive.

These ruins are preserved by the local people and they also benefit from the earnings as well. Not only will you get an experience of a lifetime walking on the same grounds as the original inhabitants but you also get to help the local community.

Currently, under the care of the National Museums of Kenya, the site has been recognised for its archaeological value and today it is one of the most highly studied relics on the Kenyan coast. In addition to being a very important archaeological site; Gede is surrounded by indigenous forest which is a sacred site for traditional rituals and sacrifices for the local Miji Kenda community. Read more here.