The 7 Magnificent Elephants of Kruger

Over thirty years ago seven impressive elephant bulls, all with tusks weighing more than 50 kg each, could be found in Kruger National Park.

Dr. U de V Pienaar – the Chief Warden at the time – decided to publicise these elephants as a successful example of Kruger’s conservation work.

He named these bulls The Magnificent Seven…

Over time the tuskers became well-known, and now, many years later, they are still remembered as some of the most glorious animals in Africa.

These are their stories: 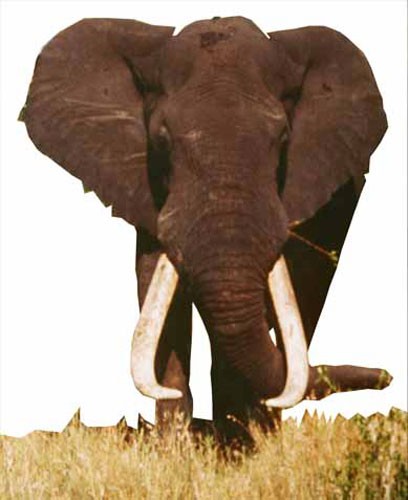 The word Dzombo is derived from the Tsonga word Dzombolo meaning ‘to wait for something that is slow in coming’. This elephant was named after the Dzombo stream that traverses the Mopani Flats between the Shingwedzi and Shawu valleys.

Dzombo was the only one of the “Magnificent Seven” to be killed by poachers and it was only by a stroke of luck that Dzombo’s two tusks were not taken. He died in a hail of bullets from an AK 47 fired by a poacher from Mozambique in October 1985. The miscreants were in the act of chopping out the tusks when they were disturbed by the approach of Ranger Ampie Espag and fled leaving their trophies behind. Dzombo met an untimely death at the age of 50 years.
(Dzombo’s tusks are on display in the Letaba Elephant Hall) 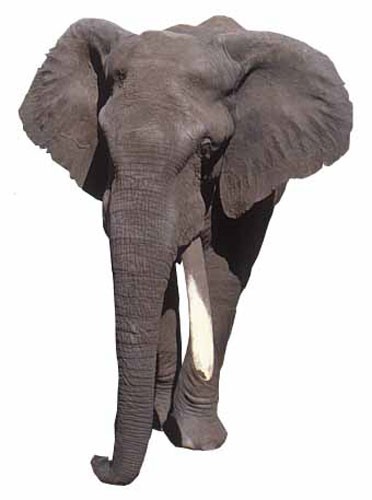 Named by Anthony-Hall Martin for Prester John, legendary priest-king of ancient Africa. (João being the Portuguese for ‘John’) João was a very large bull, with a shoulder height of 340cm.

João was wounded by poachers in 1982, at this time he was immobilized to investigate the damage. Fortunately the wounds were not fatal, and after a dose of antibiotics and cleaning of the wounds he was revived. While immobilized he was fitted with a radio collar and measurements of his tusks taken, he tusks were an estimated combined 130kg which at the time would have made him the heaviest ivory carrier of the Magnificent Seven.

In 1984 (approximate age, 45 years) João broke both tusks close to the lip line (20-30cm), presumably in a fight with another bull. Unfortunately the pieces were never found and as a result João is the only member of the Magnificent Seven who is not represented in the Letaba Elephant Hall. 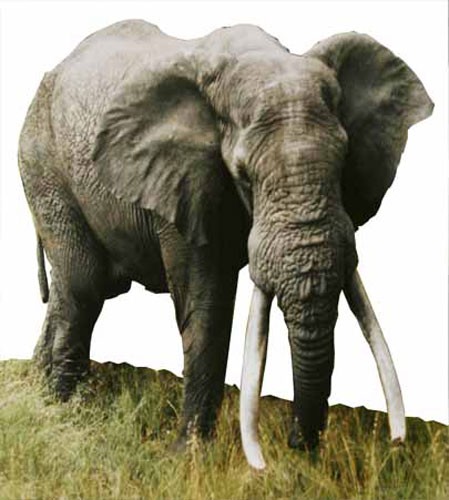 Kambaku is the Tsonga word for ‘Great Tusker’ or ‘Old Elephant Bull’.This bull moved over a huge tract of country stretching from Satara/Orpen and the Timbavati to Crocodile Bridge.Kambaku’s left ear had a perfectly round hole in it close to the outer edge, and towards the end of his life he had no tail hairs.Kambaku was the third member of the Magnificent Seven.

Uniquely unlike several of the other Magnificent Seven bull, Kambaku was always seen alone. He was more than 55-years-old when he was shot in late 1985 by Regional Ranger Lynn van Rooyen from the Lower Sabie Ranger Section. The bull was in obvious pain from a bullet wound suffered during a foray across the Crocodile River into a neighboring sugar cane fields. The bullet penetrated his left shoulder, leaving a large wound which eventually became septic. When he could not longer walk and it was clear that death was imminent, he was mercifully shot.
(Kambaku’s tusks are on display in the Letaba Elephant Hall) 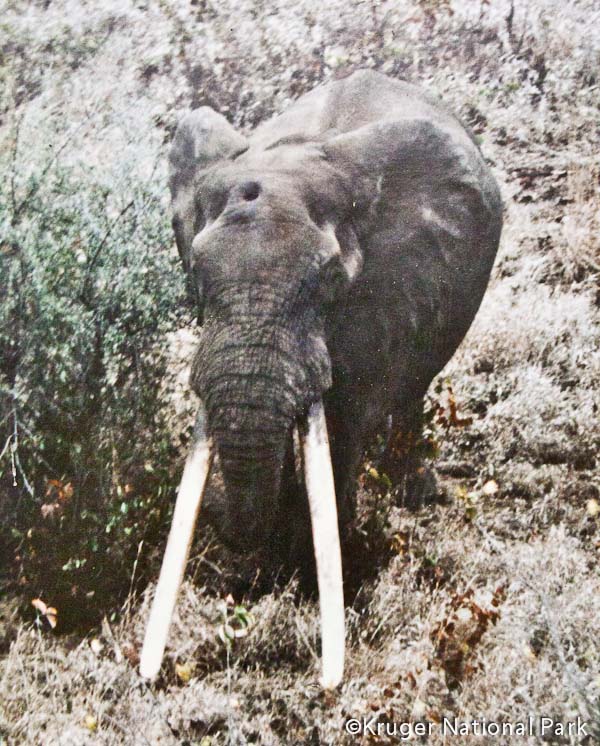 This bull was named after former warden of the Kruger National Park Lou Steyn who was well known for his quick temper. (Mafunyane is the Tsonga word for ‘the irritable one’ which appropriately refers to the elephant’s disdain for, and intolerance of humans.)
(Kloppers & Bornman (2005) (A Dictionary of KNP Place Names) gives the meaning of the name as “One who eats greedily”)

Mafunyane’s tusks are fairly straight and their tips are worn to a chisel-edge by as a result of being rubbed on the ground as he moved. His tusks were perfectly symmetrical and of identical length and mass. The bull had a 10cm hole in the right side of his skull that extended into his nasal cavity allowing him to breathe through this passage. One of his toes on his left hind foot was splayed to one side so that he left a distinctive impression, distinguishable from other elephants.

Mafunyane was the most famous of the “Magnificent Seven” although he was only seen in the wild by a handful of people, and was rarely seen by visitors as he kept well away from roads. This could be attributed to his shyness or to the fact that he chosen roaming area was very remote.

The immobilization of Mafunyane on the 8 June 1983 to fit a radio collar and to make plaster cases of the bull’s ivory nearly spelled the end for this bull. When given the antidote to the immobilization drugs Mafunyane due to his immense tusk size was unable to ‘rock’ himself onto his chest which would have allowed him to stand up, and his repeated efforts caused him to dig his tusks further into the ground. Several strategies were tried to raise him but all failed. After he had been down for several hours and front end loader was brought into assist the team. Mafunyane was eventually ‘scooped’ to his feet and the bull rose and ran into the nearby Mopane bushes much to the relief of the capture team.

Mafunyane’s remains were found on 16 November 1983 near Tari River, Northwest of Shingwedzi. He had been dead for approximately 3-4weeks and appeared to have died of natural causes. He was about 57 years old when he died.
(Mafunyane’s tusks are on display in the Letaba Elephant Hall) 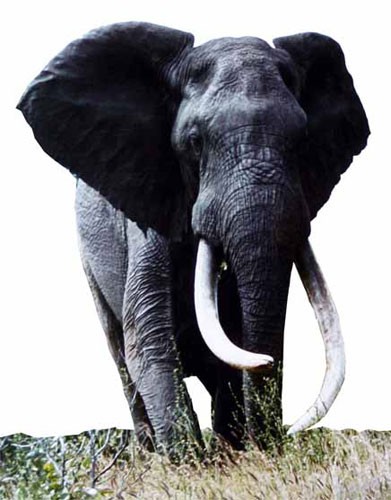 Ndlulamithi earned his name from his appearance, which is a traditional Tsonga word meaning “taller than the trees”.
The handsomely curved tusks of Ndlulamithi, the left one sweeping low and well forward, are significantly more twisted than those of the other large bulls. He was considered a tall Elephant probably around 340 – 345cm high at the shoulder.

Ndulamithi was first identified in 1980 along the Nkokodzi River in northern Kruger National Park. He was an aggressive yet secretive elephant, and was seldom seen. This bull received some fame for charging Dr Anthony Hall-Martin and his assistant while they were trying to photograph him on foot, his intentions unmistakable. He died of natural causes in 1985 in the Shangoni area at an estimated 58 years of age. Paul Zway section ranger of Shangoni at the time found his remains not far from the Nkokodzi Spruit.
(Ndulamithi’s tusks are on display in the Letaba Elephant Hall) 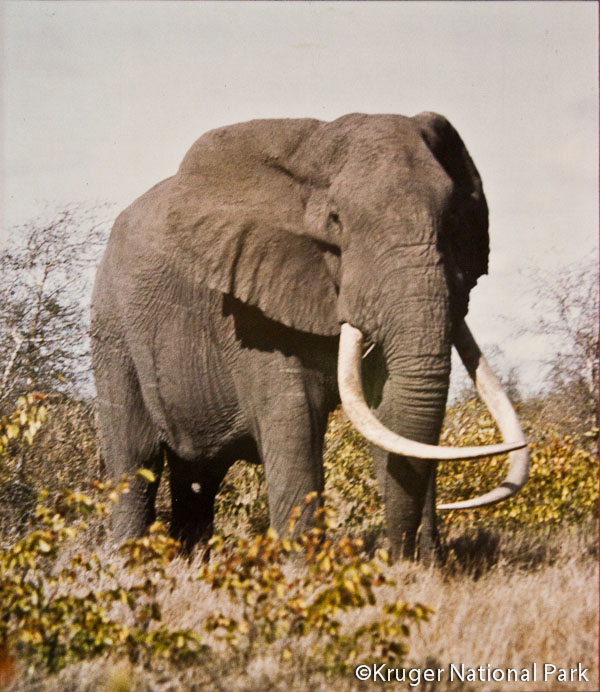 The “Shawu Bull” was named after the Shawu valley (Vlei) in which he spent much of his life.

Shawu moved over a large range which spanned the flat Mopani covered plains country between the Letaba and Shingwedzi rivers and stretched from the main road to Lebombo Hills. He did not however, cover this enormous area regularly, but drifted around slowly, taking about 6 months to move from South to North.Shawu’s tusks are the longest on record in the Kruger National Park and one of the 6th longest to ever come out of Africa.

Shawu was a fairly approachable animal and showed no particular fear or distrust of vehicles. He was a large bull having a shoulder height of 340cm. Due to the pincer formed by his large tusks he was sometimes referred to in Afrikaans as “Groot Haaktand”. In 1981 it was decided to fit Shawu with a collar as poaching was a constant threat from Mozambique, this was successfully and he was monitored on a regular basis.

Shawu died of old age in the Kostini area east of Shingwedzi, near the northern watershed of the Shawu Valley (Vlei) in October 1982. He had been ill for some time and his condition and movements were monitored daily towards the end of his life by means of a radio transmitter which had been fitted in a collar around his neck. He was close to 60 years old when he died.
(Shawu’s tusks are on display in the Letaba Elephant Hall) 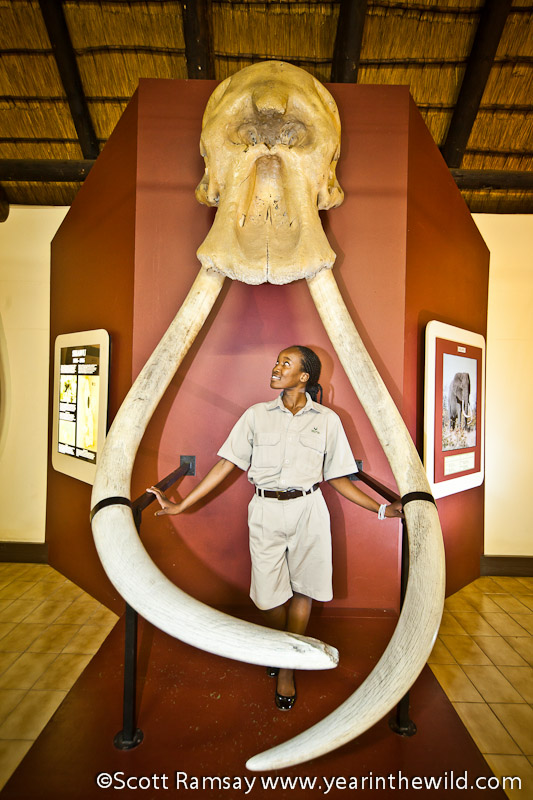 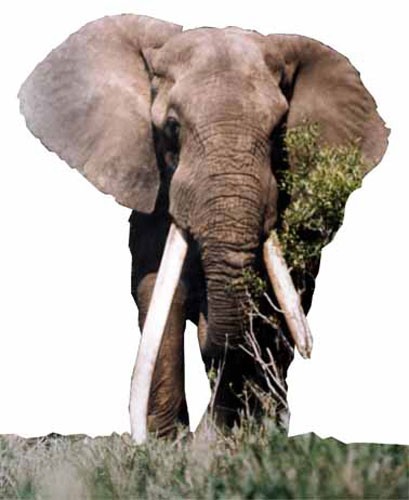 Shingwedzi was named after the river and rest camp where he spent the last few years of his life. (Shingwedzi means, “place of ironstone” referring to the gabbro rock outcrops common to the area. Shingwedzi is derived from the Tsonga word Ngwetse which means ‘the sound of metal objects rubbing against each other’).Shingwedzi’s ivory offers a good example of the classic master servant tusks. He had a large right servant tusk and a shorter left master tusk.

Shingwedzi was found dead under a Sycamore Fig and short distance from Shingwedzi camp in January 1981, and as far as can be determine he died of natural causes. The age of an Elephant can be fairly accurately determined from the state of wear of the teeth. In the case of Shingwedzi the last molar (molar 6) was well worn down, giving him an estimated age of 65 (56) years.
(Shingwedzi’s tusks are on display in the Letaba Elephant Hall)