Strawberry leopard – a first for Gauteng

Posted on November 4, 2020 by Guest Contributor 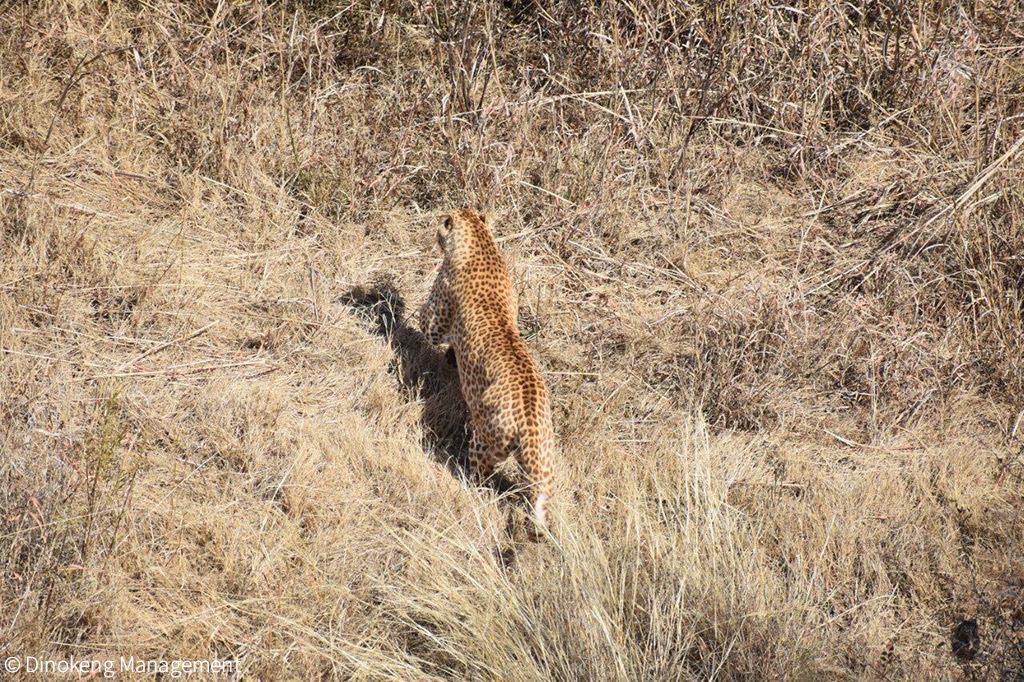 Note: See our editorial comment below if you are concerned about the possibility of this leopard being trophy hunted or poached.

Just 35 minutes from Pretoria you will find Gauteng’s first and only free-roaming Big 5 game reserve open to the public – Dinokeng Game Reserve. The reserve grew from a concept into reality through a partnership between local government and landowners/farmers and conservationists. September marked its 9th Birthday; in this time, it has come a long way from being the home of a few species of plains game and small predators to a fully-fledged and recognised Big 5 tourist location.

The past 9 years have seen the introduction of many species including lion, elephant, buffalo, black rhino, spotted hyena and cheetah. Although we have a great diversity of species, the lack of substantiated leopard sightings was a concern for us.

Leopard Conservation Project joined forces with Dinokeng management to track and trace leopards within the reserve – using a variety of methods ranging from trail cameras through to physical tracking of scat and spoor. 19 months into the project, and we had minimal success; only logging spoor and scat but no physical sightings or trail-cam photos. The elusive leopard had remained very secretive and evasive.

This all changed in late August during an aerial census of the reserve. During a routine grid flight taking photos of wildlife within the reserve, management team member Boshoff and his rangers flushed what they presumed to be a lion from the bushes within the wilderness area. Several photos were taken during this period, and when reviewing the photos, the management team noticed that this was a huge male leopard and that he had a rather strange colouration. 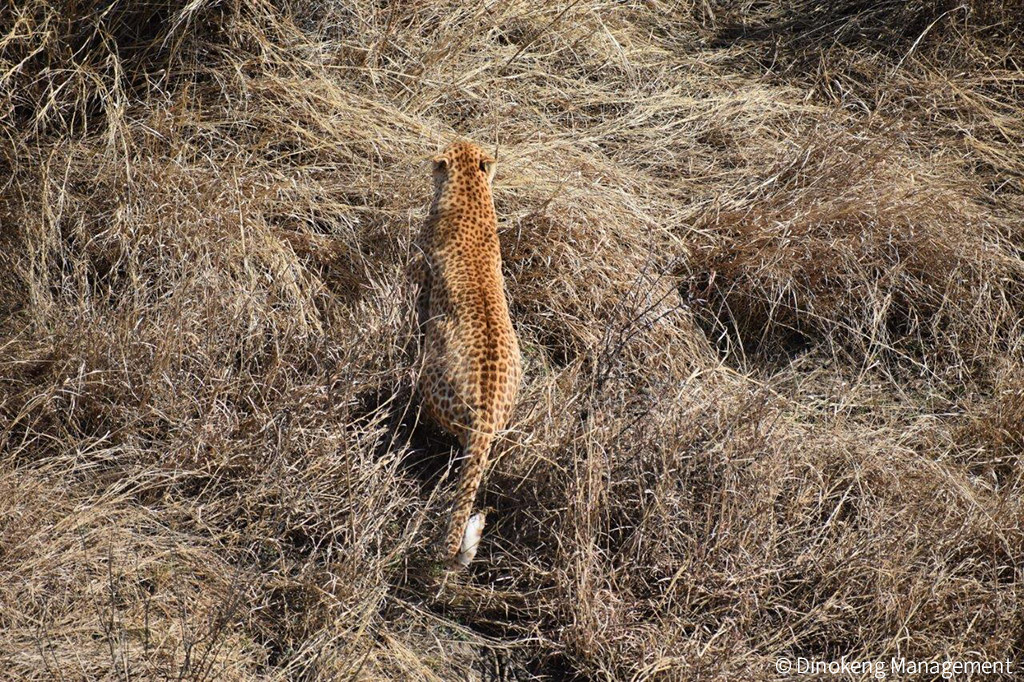 This was exciting for us – considering this was the first official documented leopard in the reserve. We subsequently met with reserve management and reviewed the photos. We had no doubt that this was a massive male leopard, and after further research and consultation with various parties, we confirmed that this rather special individual was an erythristic leopard – an extremely rare genetic trait.

The strawberry/golden/red leopard or pink panther was first seen in 2002 and only photographed for the first time in 2012 in Madikwe Game Reserve. To date, there have been fewer than a dozen sightings – predominantly within the North West, Limpopo and Mpumalanga provinces of South Africa. Erythrism requires the mating of two individuals carrying the rare genetic trait – at extremely low odds. The erythristic mutation causes the normally black pigmented rosettes to change into a reddish-brown colour. There is usually a total absence of black pigmentation on these rare leopards. As a result, these leopards appear pinkish in colour; hence the common names previously mentioned.

The fact that this leopard was found in the Dinokeng Game Reserve is especially important as it offers the reserve the opportunity to boast all of the BIG 5 as well as the fact that this specific mutation within the leopard population may be spreading beyond the previously documented range. 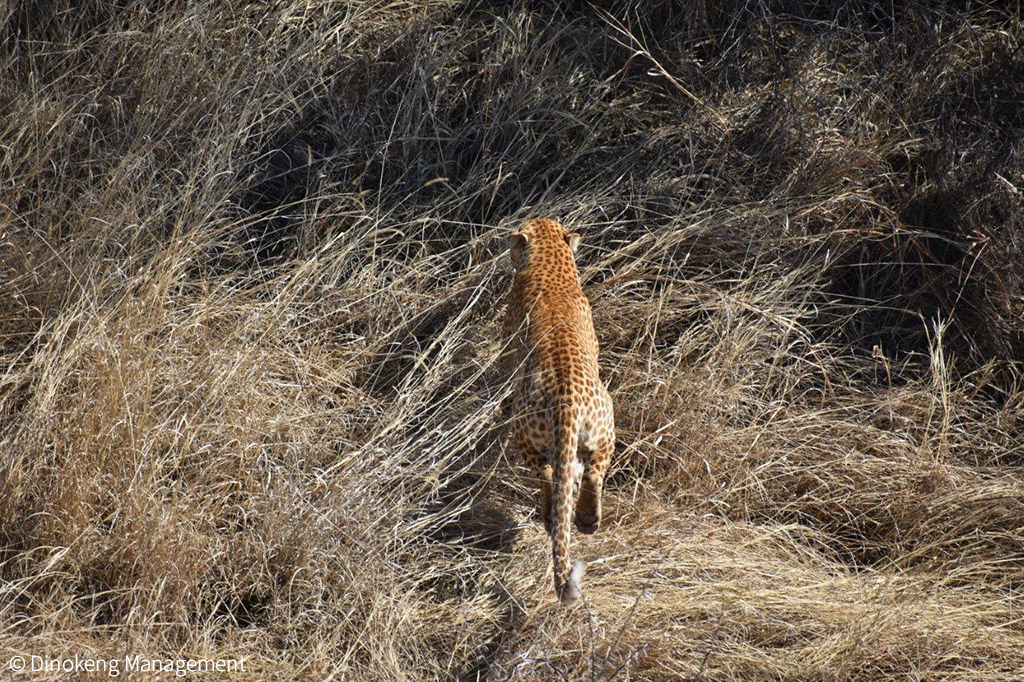 Dinokeng Game Reserve and Leopard Conservation Project believe this to be a unique opportunity to increase our research into this extraordinary leopard. We are expanding our operations in and around the reserve and would like to embark on a project to collect DNA samples from this particular leopard and from those in and around the greater Dinokeng area – to find if this mutated gene is being carried by more individuals in this range. It is our hope that we can collectively play an active role in protecting the leopards within our reserve and surroundings and hopefully increase the likelihood of having the strawberry leopard successfully increase its numbers.

As a footnote, since the initial sighting, he has been photographed on a trail cam within the reserve and, excitingly, there has been a second leopard photographed.

Editorial comment: We have confirmed with both the authors and Dinokeng management that in publishing this article, there is no increased risk to the safety of this leopard and no trophy hunting of the individual will be permitted. Their statements through direct correspondence are included below:

“Dinokeng is 100% committed to the conservation of animals in the reserve and not trophy hunting. We are a Game Reserve dedicated to the Conservation of Wildlife. We have specifically looked at various species that are key to building healthy gene pools and active populations within the Reserve and the Leopard is a key species we wish to protect within this Reserve”. – Mike Braun

“We can assure that the leopard is protected within the reserve.” – David Boshoff (Reserve General Manager of Dinokeng Game Reserve)]