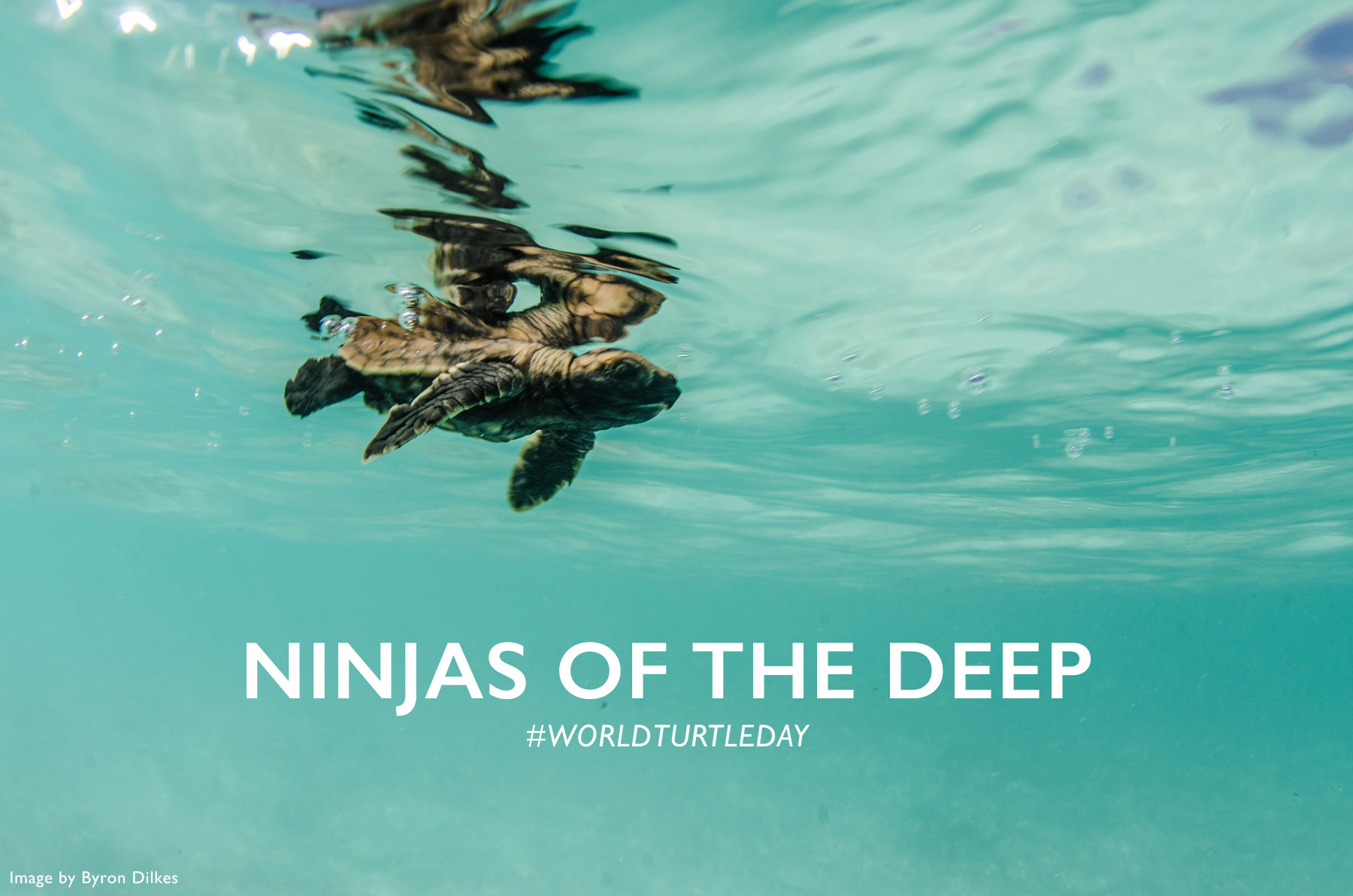 RETURNED FROM THE BRINK OF EXTINCTION

In the 1980s a quadruplet of masked teenage turtles became the crime fighting comic superheroes of the decade. But the Teenage Mutant Ninja Turtles were not the only turtles making their mark in the world. This is the story of their ocean going cousins that endure very real danger year after year to ensure the survival of their kind. On World Turtle Day 23 May, we celebrate these turtles and the humans that protect them; they are indeed real life superheroes – ed.

For 52 years scientists and conservation staff have walked, driven or ridden tens of thousands of kilometres on one of the most beautiful and unspoilt stretches of beach in the world in search of sea turtles. This area is now contained within the iSimangaliso Wetland Park, which became South Africa’s first natural world heritage site recognised by UNESCO in 1999.

This achievement was not an accident. In 1963, when the Natal Parks Board first became aware that sea turtles nested on the coast of what was then commonly referred to as Tongaland, the entire coastline had no conservation status and received scant attention from the Department of Bantu Administration, which controlled the area. All that has changed, thanks in part to the two wonderful species of sea turtles that emerge every summer to lay eggs in the warm, golden sand.

By the end of the Second World War when global concern about the potential loss of wildlife species was first being raised, and the formation of international conservation efforts was under consideration, there is little doubt that the outlook for sea turtles was bleak indeed, and informed opinion was that they were headed for extinction. So the 1963 discovery in South Africa of two species of nesting sea turtles – the loggerhead turtle (Caretta caretta) and the leatherback turtle (Dermochelys coriacea) – was cause for celebration. And the resulting conservation effort has more than justified this surge of optimism.
Absolutely nothing was known about these turtles at the time, so conservationists and biologists started – hesitantly at first – researching their biology, life cycles and distribution.

The most common of the two species nesting here is the loggerhead. Over the past 52 years, thousands of tagging hours have shown that loggerheads nesting in Maputaland range through some fifteen million square kilometres of the western Indian and south Atlantic Oceans. It is now known that they are long-lived, perhaps surviving as long as 80 to 100 years and that they nest many times each year laying over 400 eggs per season. They are capable of repeated visits over a time span of 37 years, varying the intervals between nesting seasons according to their ability to withstand, and recover from, the heavy physiological strain of a nesting event.

Populations rose from barely 200 to more than 1,000 loggerheads

Very few turtles were found in the early years, barely 200 per season, possibly because of steady attrition by poaching, which was then very common in Mozambique, but more probably as a result of the excessive collection of eggs by the local amaThonga people living close to the beaches. All this was stopped in 1963 and since then, to the delight of scientists and conservationists alike, the number of visiting females has steadily and exponentially increased until, at present, more than 1,000 nesting animals are seen annually. This success has facilitated the growth of tourist lodges and turtle guiding concessions, some of which are managed and run by the local amaThonga people who have long recognised the greater value of a thriving turtle population over an extinct one.

There can be no greater reward for conservationists’ effort and commitment than clear proof that a population is drawing away from the brink of extinction. The South African programme was the first in Africa and has inspired neighbouring countries to join the campaign. So today the shared population of loggerheads is increasing in Mozambique, where it is also becoming significant.

The leatherback response to conservation has been positive but not as spectacular as that of the loggerhead. From an all-time low of only six female leatherbacks seen in 1966, the number rose to as many as 160 in the 1980s – but it has subsequently dropped to between 60 and 100 females per season.

The recorded inter-season movements of leatherbacks fitted with satellite transponders has been followed with great excitement. These truly pelagic animals move freely between the Indian and Atlantic Oceans feeding only on jellyfish and returning to their home beach to lay eggs after varying intervals. Although they can lay up to 1000 eggs in any one season, the increase in population has been disappointingly slow, possibly because of the many hazards they face as they travel up to 20,000 km a year through the open ocean. As well as the many natural dangers inherent in long ocean migrations, turtles also face the very real risk of being killed by long lining and drift netting.

Fewer than 2 of every 1,000 survives to continue the species

One of the really exciting and valuable results of long-term research came from the programme designed to establish the destinations of newly-hatched loggerhead turtles and the age at which the survivors return to the natal beaches as nesting adults. Over a period of about 31 years, some 350,000 hatchlings were caught, marked and optimistically released into the ocean off the Maputaland coast. With the excellent cooperation of the media in the early 1970s, this programme soon demonstrated that the little turtles enter the powerful Agulhas Current in which they drift south at speeds of up to 100km a day, with some reaching Cape Agulhas – 1,600 km away – in 16 days.
Over the past decade recovery of adult females bearing evidence of having been marked as hatchlings has made it possible to ascertain that the average age of nesting maturity is 36 years, and suggests that fewer than 2 out of every 1,000 hatchlings entering the sea survives to continue the species.

The South African programme has had many spin-offs of benefit to sea turtles and has inspired other Indian Ocean nations to monitor their turtle populations. French scientists based in Réunion Island have expanded the research programme started in 1970 by a South African researcher to include observation of the green turtle (Chelonia mydas), which nests on the islands around Madagascar.
A successful satellite programme that monitors sub-adult loggerheads passing Mauritius, Réunion and Rodrigues has shown that South African loggerhead hatchlings travel thousands of kilometres in the southern Indian Ocean gyre eventually reaching the South Equatorial Current where they mix with many more thousands of loggerhead hatchlings originating in Oman. Together they sweep back towards Madagascar, eventually splitting into two separate groups – one going north to return to their home beaches of Oman, and the other turning south to eventually add their genes to the South African populations. These amazing journeys start when the little turtles are a mere 45mm long.

Their amazing journeys start when they are a mere 45mm long

Annual counts indicate that the numbers of many turtle populations in the southwestern Indian Ocean are showing increases and, although some records of growth are slower than others, the trends are positive. The World Heritage status accorded the iSimangaliso Wetland Park recognises and rewards the committed protection of the turtles of the Maputaland coast by South Africa. There should, however, be some sort of reward and recognition of an animal that can start life as such a tiny, vulnerable baby, travel such extraordinary distances, spend so long exposed to the numerous dangers of the open ocean, and return time and time again to its natal beach to ensure the survival of its species.
It is nice to think that we have helped, but, even so, one can only doff one’s hat to a family of very singular animals.
Read about the remarkable story of a loggerhead turtle fitted with a 3D-printed titanium jaw. 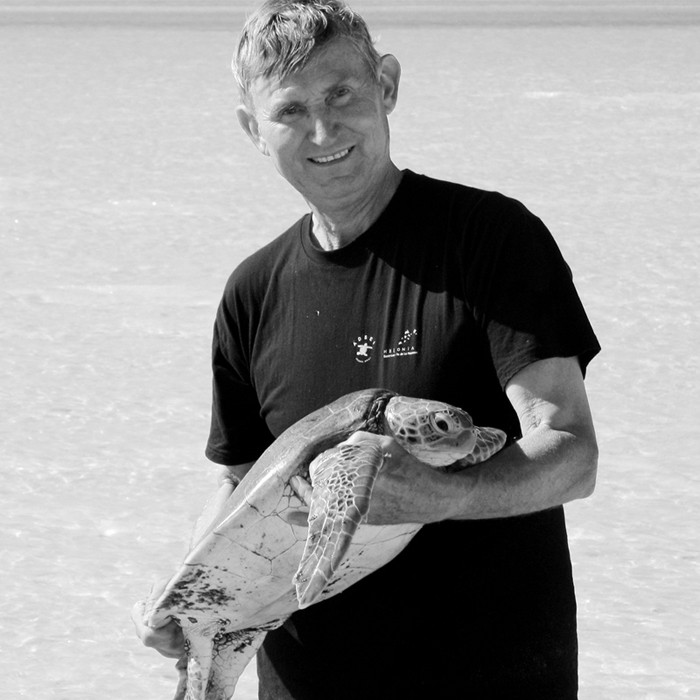 Scottish born in 1939, DR GEORGE HUGHES became a game ranger in South Africa’s Giants Castle in 1961 before leaving to study Zoology at the University of Natal in 1965. He pursued a higher degree in Zoology studying sea turtles throughout the South Western Indian Ocean and finished his PhD in 1974, rejoining the Natal Parks Board as Senior Scientist. In 1975 Dr Hughes was appointed a senior manager becoming Chief Executive Officer of the Natal Parks Board and in 1998 CEO of the Board’s successor Ezemvelo KZN Wildlife. During his career, he has remained active in sea turtle research and has visited many parts of the world as a conservation expert. He has accompanied or led official South African delegations to conservation conferences with objectives as diverse as Sustainable Use, CITES and Conservation Economics.
Dr Hughes is the recipient of numerous awards including a Lifetime Achievement award from the International Sea Turtle Society.
Retired after 42 years he continues to be involved in sea turtle conservation, enjoys writing (305 publications, including his most recent book “Between the Tides” – in Search of Sea Turtles) and lecturing and spent four years as Chairman of a national radio programme “Talking of Nature”.