Opinion: The (high) road to a Greater Kruger National Park

Posted on June 26, 2018 by Don Scott in the Opinion Editorial post series. 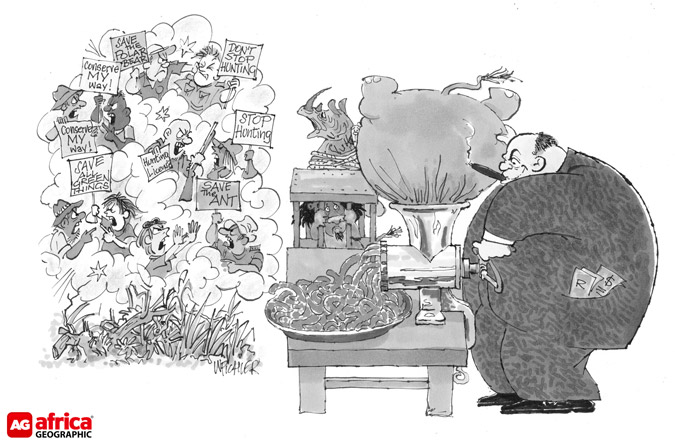 In the last few weeks, social media was once again at the centre of a flurry of activism regarding the hunting of a lion in the Greater Kruger area. I have been disappointed by these emotive and often violent exchanges. At times, I feel despondent that the unifying impact that some of us in the conservation space have been trying to cultivate this year, could be damaged by divisive arguments and views on the Greater Kruger. This is a social-ecological system that has been carefully managed and nurtured over decades, and one that happens to be working extremely well today. I, therefore, offer an alternative, constructive perspective to the Greater Kruger Protected Area, in contrast to the more acrimonious narratives that are doing the rounds as we speak.

But why should anyone listen to me on this subject?

To start with, I am a citizen of the Greater Kruger. I have lived in the Timbavati Private Nature Reserve for over 10 years, where I own and run a photographic safari operation, Tanda Tula, which employs over 60 people from local communities. We lease the land from one of the landowners in Timbavati. With each of my team supporting a further 10 people on average, my business has a direct impact on over 600 people in this area. I have been on the Executive Committee of the Timbavati Private Nature Reserve since 2011, and I am now also a member of the Steering Committee for Responsible Tourism Best Practice in the Greater Kruger Protected Area. In short, I have some “skin in the game” in the Greater Kruger, as my family and my business is deeply rooted in, and deeply affected by, what happens in this area.

I am not just a sideline commentator. I have an in-depth knowledge of how the Private Reserves, which form part of the Greater Kruger, function and how they contribute to the success of the larger integrated wilderness landscape. I am also deeply aware of the challenges facing this landscape.

So, who are the stakeholders with “skin in the game,” and who should be influencing the decisions made about how the Greater Kruger is managed? Whose values matter most?

The ‘Most Vocal’ award goes to…

From all of the media fuss, it appears that the most vocal and influential parties come from the main urban centres of South Africa and from Europe and North America. And some of the animal rights activist platforms that directly support journalism with funding and marketing are based in Cape Town and Johannesburg. These white urbanites work tirelessly to influence other white urbanites, promoting an ideology of Africa’s wilderness spaces created by American romantic poets in the early 20th century.

According to this view, Africa was a vast mythical landscape teeming exclusively with wild animals, devoid of any human activity.

How committed are we all really? The facts speak for themselves.

SANParks held 54 stakeholder engagement sessions in the last 18 months, as part of the development of the new management plan for Kruger National Park. The most well-attended of these were in the communities who live on the border of the Kruger National Park – literally thousands of members of the public engaging with Kruger management officials to express their concerns and aspirations for the region. In addition to these public sessions, the Private and Community Reserves forming part of the Greater Kruger also had their turn – these sessions were also very well attended with every reserve represented. By contrast, the public engagement sessions in the large urban centres, where all of the current media and social media conversation on the Greater Kruger National Park emanates from, were poorly attended. Cape Town and Johannesburg each only managing an attendance of 9 individuals!

This paints an interesting picture, does it not? When it came to proper engagement – you know, where humans discuss and find solutions, the loudest voices on social media did not turn up. Instead, the people whose lives are most directly affected and who have genuine “skin in the game”, turned up and participated in big numbers. These same people are the least represented on social media. It would appear that social media represents an upside-down version of the situation on the ground in Africa.

Major concerns from those who bothered to pitch up

So what were the major concerns of the communities within and living on the borders of the Greater Kruger? The top five issues raised were: jobs and employment; education; community development; crime; and human–wildlife conflict. Other issues that repetitively and predictably continue to get so much social media attention – such as trophy hunting – did not even feature in the top 20 list of concerns of these communities.

The question I ask then is: Why are we, the citizens of the Greater Kruger, allowing the narrative of our story to be seized by people who live and work thousands of miles away, and who seem to push an agenda that is foreign to what is clearly wanted by all directly-affected communities and landowners? Why are the people whose lives are most affected by the decisions made in and around the Greater Kruger remaining silent in the media? Why is the multi-faceted story of the Greater Kruger and its success not being told from within, but instead being commented and narrated on from far away?

What is the truth, if not factual?

The picture painted by these activist journalists who report on sensational stories about particular animals or species comes across to the unsuspecting reader as the gospel truth – but this is incorrect. These “truths” are simply the worldview of that journalist, and his/her supporters. It is important that we as media consumers understand that what is sometimes positioned as fact, is only opinion. Sometimes it is simply innuendo designed to stir public opinion in support of a particular ideology.

Make no mistake, I applaud the efforts of journalists and investigators who uncover real misconduct, and I believe that oversight and regulation is extremely important for a system like the Greater Kruger to function effectively. However, constantly creating stories designed to ferment division and dissent within the conservation community is simply a destructive pastime that should not be tolerated by any of us – especially those of us who are part of the Greater Kruger and whose own knowledge of the realities on the ground can help to rectify misperceptions created in the media.

The trophy hunting debate is futile

To me, the debate around hunting is as futile as it is divisive. Arguing with protagonists on both sides of the debate is like having a discussion with a religious zealot. There is no point in presenting facts to either of them, as they simply cast these aside as “propaganda”. All of them continuously return to the same cherished old points which they seem to think proves their argument. Since these arguments are more about values than facts, they prove nothing but only serve to continue the circular arguments and cement ideologies.

Whilst heated discussions play out in the media and on social media, South African conservation is at a crossroads. Do we take the ‘high road’, where different stakeholders have different values and expectations and exercise tolerance for each other? This ‘high road’ leads us to larger, integrated, wildlife habitats with their ability to support wildlife in greater numbers than ever before. Or do we by contrast take the ‘low road’, where the conservation landscape is driven by low-level divisive arguments and mud-slinging from within – social divisions are deepened and the whole system begins to fragment and collapse. This ‘low road’ leads us to more fences going up, and reserves fenced exclusively for hunting, and less land available for wildlife to range in – with resultant break down in ecosystem carrying capacities, more intensive control required over high impact species such as elephants, buffalo, hippos and lions, and an eventual loss of many truly wild animals.

The Greater Kruger is a shining example of how ‘high road’ thinking can lead to a thriving wilderness landscape. But, don’t be fooled, the careful work of many decades can be undone through a ‘low road’ approach from people who have no skin in the end result. South Africa, in particular, has a careful path to follow when it comes to land use issues. We face pressure to justify using these private pieces of land for conservation when many with political agendas would prefer livestock or vegetable farms. The conservation community has a new path ahead of it, with great efforts needed to integrate communities into the wildlife economy, and with challenges around justifying the presence of wild animals close to those communities. ‘Low road’ arguments and discussions are endangering the efforts of the conservation community to focus on the fundamental issue – the availability of wilderness habitats.

It’s all about habitat

Now, I am not saying that there are no other pressures on wild animal populations – we all know that there are – human-wildlife conflict, the bushmeat trade, and of course poaching across Africa are all of great concern, and are all factors that the conservation community is working hard on addressing. I am simply reiterating the fundamental truth: That without Africa’s wild habitats, there will be no more wild animals. Practising tolerance to save wilderness habitats is the ‘high road’.

To bring the topic back to Africa’s great conservation success story – the Greater Kruger, I propose that we take the ‘high road’ in order to continue to grow and consolidate this landscape. The Kruger National Park has been working hard at retaining its relevance within the new context of South African society. They have engaged meaningfully with the South African public and the stakeholders of the Greater Kruger – this has included members of local communities, the greater public and landowning stakeholders in the Private and Community Reserves that form part of Greater Kruger. They have realised that for the Kruger National Park and the Greater Kruger to be sustainable, and even to grow, the variety of value systems held by different people, and particularly the value systems of the people living directly adjacent to the Greater Kruger, must be embraced.

There needs to be a willingness to accept these different value systems for the benefit of the greater good. The citizens of the Greater Kruger are practising the values of ‘high road’ thinking. I urge everyone who is interested in saving Africa’s wildlife to do the same.

Don Scott has over 15 years of experience in the Aerospace Engineering Industry in Africa, Europe and the USA, as well as 15 years in the Photographic Safari Tourism industry. Don’s journey with tourism started in the Timbavati Private Nature Reserve in 2001. Today, Don and his wife, Nina, are the owners of the Tanda Tula camps in the Timbavati. Don is deeply involved and dedicated to both community development and conservation through tourism in the region. He sits on the executive committee of the Timbavati, on the Joint Operations Committee for the APNR node of Greater Kruger, and he served on the Greater Kruger task team for Responsible Tourism and Best Practice.