Posted on February 19, 2019 by Guest Contributor in the Opinion Editorial post series.

Have you ever wondered why South Africa seems to have so many captive lion cubs, in what are known as ‘lion parks’?

The reason, in my opinion, is one that we all need to face up to: IT’S A SCAM.

The still-growing lion cub petting industry masks a sinister legal industry in South Africa. Playing with cute little lion cubs is the tip of the iceberg – it’s what you don’t see that defines this abusive industry.

When tourists and volunteers visit one of the numerous ‘lion parks’ in South Africa and enter the play pens of young orphan cubs, their instinct is to question the situation. What? Why are so many lion cubs being orphaned? And, almost without exception, they are told a lie – that the cubs’ mothers died or abandoned them. This lie is repeated again and again – in marketing material, press releases and hashtags – so much so that even good, caring people repeat the mantra and become party to the lie, and the scam. You see, these lion cubs are forcibly removed from their mothers – to feed what has become a lucrative the lion cub petting machine.

We can all do the research. I’ve done it for five years, both as an animal advocate and consultant in the tourism industry. Spend 5 minutes on Instagram and see for yourself. There are thousands of images of young, motherless lion cubs (plus cheetahs and even tigers) and all of them are being interacted with by tourists and volunteers.

How could it be that there are so many big cat mothers out there suddenly willing to abandon their cubs?

This does not add up. Right?

On the face of it, lion parks look like fantastic nurseries for unfortunate ‘orphaned’ cubs – offering a caring home, and eventual return to the wild. Oh, and of course there are endless streams of tourists paying to manhandle the cubs continuously throughout the day – when lion cubs should be sleeping, feeding and bonding with their mother and siblings. Instead they are passed around like binoculars on a safari game drive.

According to South Africa’s Department of Environmental Affairs, South Africa has an estimated 8,000 captive lions in approximately 200 breeding facilities. One can add to this an unknown number of private (backyard) breeders that operate without permits and provide an endless supply of cudly merchandise to this hungry industry.

Each of these lion parks and breeding facilities may have between 1-4 breeding females. If we take a conservative average of two lionesses per facility – that’s 200 facilities, 400 lionesses and conservatively 2,400 lion cubs born every year (assuming two litters per year per lioness and three lion cubs per litter – an extremely conservative estimate).

Lion farmers/breeders speed-breed their lionesses by removing the cubs soon after birth, thereby inducing the lionesses into estrus once more. Wild lions breed only once per year, at the most. The tiny blind cubs have now become part of the machine.

>2,400 LION CUBS BORN EVERY YEAR TO FEED THE MACHINE

Where and what are all these lion cubs destined for?

There is no documented evidence of any captive-bred lion in South Africa having been released into the wild – despite claims to the contrary. So remove that solution from the equation.

So why are these lion parks claiming that their lion cubs are “orphans”? And what exactly is the journey for that lion cub after its petting shelf life has expired? What is the link between these tiny cubs and the burgeoning canned lion hunting industry?

Timeline and roleplayers: From petted to hunted

• REMOVAL OF CUBS: This usually happens after only a few hours or days after birth, when the newborn lion cubs are forcibly removed by breeders from their mothers and sold or loaned to lion parks for exhibition and petting purposes. Volunteers have often described to me the days when newborn cubs arrive by the box-load. Again the reply to obvious questions is that the mothers died or rejected and abandoned their babies

• PETTING: Each tiny cub, initially still with closed eyes, is petted by thousands of tourists keen to experience a close encounter with a cute and cuddly big cat cub. The cubs are handed from person to person and forced to pose for the all-important selfies.

• WALKING: Once the cubs reach the age of about six months they become too big (and dangerous) to cuddle, and graduate to being walked with tourists, while a handler protects the tourists from being harmed by the adolescent and sometimes boisterous lions.

• VOLUNTEER EMPLOYMENT: Local and international volunteers are tempted to South Africa, with the tantalising prospect of caring for these newly “orphaned” baby lion cubs. These naive volunteers pay for such work experience at lion parks, believing the lie that there work is important conservation work – to ‘save’ orphaned cubs and help with ‘lion research’ and/or to ‘return the lions to the wild’

• TOURISM: Local and international tourists, in their thousands, pay around R100-R200 ($10-$20) for the opportunity to play with baby lion cubs and to walk with adolescent lions, usually at the same facility. These tourists are fed the same lies.

At this stage the lion parks wash their hands of their ‘orphaned’ lions.

• HUNTING: After two years of tourist petting and walking, the lion progresses to the second-last stage of its usefulness. The tourism industry now has no further need for this lion, and it is traded into the hunting industry, where it is shot by trophy hunters in what is known as ‘canned hunting’. Some of the lions are sold to zoos, others are kept back for breeding, but the majority disappear into the opaque and sprawling network of trophy hunting farms that are spread across the South African bushveld. Lion parks will often vehemently deny any association with the hunting industry, claiming that they sell / trade / swap lions to intermediaries and that they have no control over what happens after that. The lion parks will simply refuse to disclose the identities of the buyers or locations of the lions’ new homes, in order to keep the lions “safe from poachers”.

There have been several exposés on various lion parks around South Africa (CBS 60 Minutes, Carte Blanche, The Guardian, to name just a few), which have uncovered these sales and permits, demonstrating how cub petting facilities are selling their lions to known lion hunting outfits.

The canned hunt attracts trophy collectors paying anywhere from $4,000 for a lioness, to $40,000 for a male white lion (hunting wild white lions is illegal). The hunt takes place in a small fenced area (often the size of half a football field), complete with typical bushveld trees, for that African feel. The lion, fresh from captivity, is released into this enclosed area – and shot. Legally the hunt organiser needs only release the lion into this area for 36 hours for it to be classed as “fair chase”.

• LION BONE TRADE: The final stage for the (now dead) lion is the selling of its bones to the insatiable Asian market for Traditional Chinese Medicine (TCM), for approximately $1000-$1500 per skeleton.

Why lion parks in South Africa are scams

To avoid the usual slew of accusations and legal threats from this industry, let me be clear on one point: the lion park facilities offering tourists the opportunity to play with lion cubs are not the same entities offering canned hunting experiences. I will leave it to you to come to your own conclusions in this regard.

Recently I conducted a small research task on social media to highlight this issue.

Considering that Instagram is the go-to place for lion-petting selfies, I based my research on this platform, with the following results:

Using popular hashtags and an appropriate time period to prevent double-counting of cubs, I asked my population of 100 respondents: “Did the park inform you about where these lion cubs (that you are interacting with) came from?”

Here are some of the replies. The level of deceit is obvious. 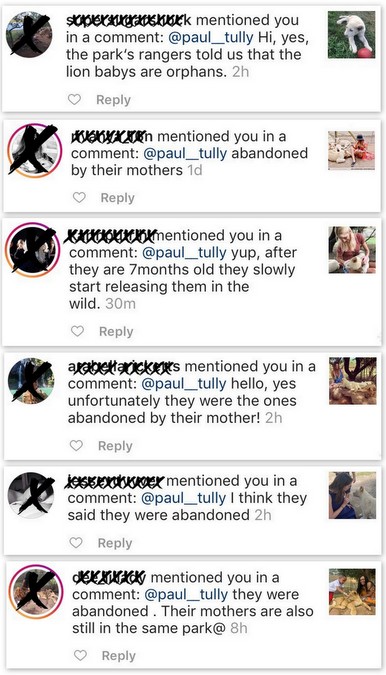 Of those answers gained from my questioning 90% were similar to those above. The other 10% stated that they either could not remember, were not told by the facility or that they didn’t ask about the whereabouts of the cubs’ mothers.

To be clear on this matter: 90% of lion park visitors polled were told the lie that the park’s lion cubs are orphaned or abandoned by their mothers.

What we have here is cruel exploitation of helpless lion cubs and the scamming of thousands of tourists and volunteers every year. And this is all legal, apparently.

This must end. The lion parks in South Africa are not only fuelling the trade in wildlife and wildlife parts, blatantly scamming innocent tourists and volunteers out of their money, and ruining South Africa’s proud tourism brand name.

In March 2016, the United States Department of Agriculture barred zoos from allowing cubs under four weeks old to be petted or fed by members of the public.

I urge and plea with South Africa’s Government to adopt a similar regulatory policy, and to ban all public interactions with big cats.

The effects of such restrictions would:

• Result in a decline in the non-conservation related breeding of big cats (namely lions, tigers, cheetahs, leopards and mixed breeds);

• Create better monitoring capability of both the legal and illegal wildlife trade in South Africa;

• Ensure both local and international tourists are safeguarded from deceitful practices;

Instead of dwelling on the past and asking how this evil industry was allowed to mushroom and thrive, let’s take a step forward and simply end it. I believe in progress and that the South African Government, and President Cyril Ramaphosa particularly, can lead this beautiful country away from abusive industries like this.

It is up to all of us to stamp out the wrongs that we see. Please let’s start by stamping out the scam that is the big cat cub petting industry.