Posted on February 1, 2018 by News Desk in the News Desk post series.

In this week’s news wrap a hunter was shot dead at a captive-bred lion hunting farm in South Africa; Hong Kong has voted to ban domestic ivory sales in a landmark move; around 600 kg of elephant tusks and 600 kg of pangolin scales were seized in Ivory Coast; US President Donald Trump has confirmed that he will not be lifting the ban on elephant trophies from Zambia and Zimbabwe; and 3.5 tons of hippo teeth went up for auction on Monday in Tanzania, despite criticism.

While details around the incident remain sketchy, police spokesperson Captain Charlize van der Linden, confirmed that Pero Jelinic, from Croatia, and two other Croatians, were hunting captive-bred lions at Leeubosch Lodge near Setlagole in South Africa, when the incident occurred.

According to Van der Linden, the hunting party had already killed a lion, and were tracking a second cat, when Jelinic was struck by a bullet.

“He was air-lifted to Vryburg Hospital by helicopter, but doctors were unable to save the man’s life. A case of culpable homicide has been opened, and police are also investigating charges of illegal possession of a firearm and ammunition,” she said.

“At this stage it is not clear who fired the fatal shot that killed Mr Jelinic. Our investigations are ongoing.”

Hong Kong has voted to ban domestic ivory sales in a landmark move on Wednesday to end the infamous trade in the city.

Lawmakers overwhelmingly voted for the bill that will abolish the trade by 2021, following on the heels of China’s complete ban on ivory sales that went into effect at the end of last year.

“Shutting down this massive ivory market has thrown a lifeline to elephants,” said Bert Wander of global advocacy group Avaaz in a statement.

“Today is a great day for elephants. Hong Kong has always been the ‘heart of darkness’ of the ivory trade with a 670-tonne stockpile when international trade was banned in 1989,” said Alex Hoffard of WildAid Hong Kong.

The amendment to the Protection of Endangered Species of Animals and Plants ordinance will phase out the trade in three stages, a time period some conservationists say could be exploited as a loophole and too late for African elephants which continue to be killed in huge numbers.

The steps include a ban on trade in hunting trophies and ivory dating from after 1975, when a global treaty regulating the trade took effect. It would later extend to ivory acquired before 1975, and finally traders would have to dispose of their stock by 2021.

Penalties for offenders will be increased to a maximum fine of HK$10 million ($1.3 million) and 10 years’ imprisonment.

Around 600 kg of elephant tusks and 600 kg of pangolin scales have been seized in Ivory Coast, ready to be sent to Vietnam and other Asian countries, authorities said last Thursday.

In an operation lasting several days that aimed to dismantle a major trafficking network, six suspects were arrested.

“The ivory was ready for export to Vietnam. The … pangolin scales were destined for Asia,” Bonaventure Adomo, head of Ivory Coast’s anti-smuggling unit, told reporters. The unit said two of the suspects came from Ivory Coast and one from Guinea, and that the ivory had come from as far afield as Gabon, Nigeria, Mozambique and Uganda.

The anti-trafficking group EAGLE, which worked with the authorities, said two of the suspects were from Vietnam and one from China.

US President Donald Trump has confirmed in an interview with Piers Morgan that he will not be lifting the ban on elephant trophies from Zambia and Zimbabwe.

In an interview with Piers Morgan for the UK’s ITV that aired on Sunday, the president announced this months after it was first announced that the ban was to be repealed by the the United States’ Fish and Wildlife Service (USFWS), later halted by Trump after worldwide outcry.

His reasoning? That the money from hunting doesn’t go to conservation in those countries, but instead was “going to a government which was probably taking the money, ok?”

He went on further to explain that the decision to repeal was made by a “high level government official” that appears to have gone behind the president’s back.

“As soon as I heard about it, I turned it around. That same day – not even a day went by,” Trump said in the interview.

3.5 Tons of hippo teeth up for auction in Tanzania, despite criticism (full story: AG News Desk) 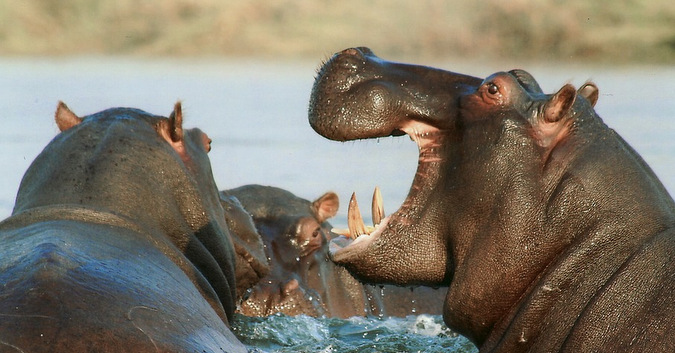 Authorities in Tanzania planned an auction of 3.5 tons of hippo teeth this week, drawing criticism from conservation groups who say the sale could encourage increased killing of the vulnerable species for its body parts.

Licensed dealers on Monday could bid for the 12,500 pieces of hippo teeth at the tourism and natural resources ministry in the east African nation’s commercial hub of Dar es Salaam, according to Tanzanian wildlife authorities. Buyers will receive documents confirming ownership.

Many hippo populations across Africa face intense pressure from hunting for their ivory and meat, the WWF conservation group said.

“Therefore, even though some countries still have healthy populations, WWF discourages the consumption of hippopotamus ivory and are disappointed to see auctions such as this taking place,” said Colman O’Criodain, a WWF expert in wildlife trade.

Update: According to The Global Times, a Tanzanian firm on Monday bought 12,467 pieces of hippo teeth weighing 3,580.29 kg at the auction.