Posted on November 29, 2018 by News Desk in the News Desk post series.

In this week’s news wrap eight people have been arrested for illegal possession of lion bones, meat and tiger skin; a warden was convicted after an illegal collared elephant hunt in Greater Kruger; Malawi investigates the deaths of at least 22 hippos at Liwonde National Park; and a High Court ruling proves a huge victory for Xolobeni community over an Australian mining company.

Eight people have been arrested in connection with the illegal possession of lion meat, lion bones and a tiger’s skin outside Klerksdorp in the North West, the Hawks said on Monday.

According to the media statement from the Hawks, the eight suspects were aged between 22 and 60, and were arrested on Sunday during an intelligence driven operation conducted by the Hawks’ North West Serious Organised Crime Unit assisted by Crime intelligence, Klerksdorp TRT, Potchefstroom flying squad and the Department of Nature Conservation.

“The team intercepted two vehicles at the intersection of N12 and Dominionville driving in a convoy headed to an unused farm in Mareetsane. A search of both vehicles the team recovered lion bones, lion meat, a tiger skin, gas cylinders, gas burners, containers, a saw, knives and other equipment which is believed to have been used to process the lion bones,” the statement read… (Continue to full story here)

On 13 August this year a scheduled elephant hunt was conducted illegally in Balule Nature Reserve, a private reserve within the unfenced Great Kruger area, but outside of the Kruger National Park boundaries. A collared male elephant of 20-30 years old, with tusks of approximately 30 pounds on each side, was shot and killed during the illegal hunt.

Balule management laid criminal charges against the culprit as soon as the incident was reported.

A regional warden by the name of Frikkie Kotze, representing the private property within Balule during the hunt, pleaded guilty to the charges and was fined R50,000 OR five years imprisonment, with both options suspended for five years. In addition, he must pay R35,000 to Elephants Alive to replace the elephant collar. The hunting party consisted of Kotze, professional hunter and outfitter JJ Horn, the client and his wife… (Continue to full story here) 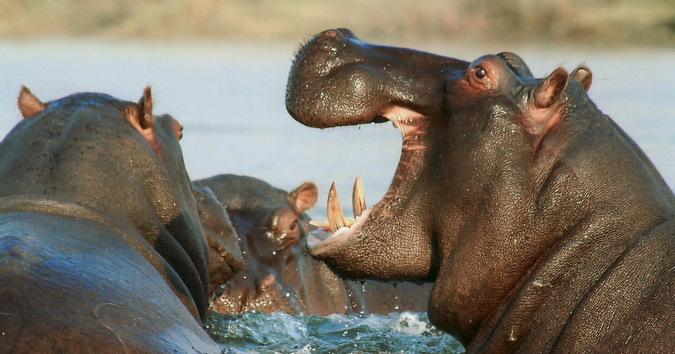 At least 22 hippos have died in Malawi in two months, raising fears that the wild animals could become extinct in the southern African country, according to a report.

Malawi24 quoted wildlife authorities as saying that they noticed carcasses of hippos floating on Shire River in Liwonde early last month. The Director of Parks and Wildlife Brighton Kumchedwa expressed shock at the massive deaths, adding that it was the first time to have 22 hippos dead in the country in a very short period.

A report by Xinhuanet.com said that the Department of Parks and Wildlife in Malawi was investigating the cause of the deaths.

“We are working with the vet department officials and the African Parks who are managing the National Park to establish the cause as this is the first time for the country to witness this,” Director of the Department of Parks and Wildlife, Brighton Kumchedwa was quoted as saying… (Continue to full story here)

It was joy and jubilation for the Xolobeni community last Thursday as the Gauteng High Court, Pretoria, ruled that consent must be given by communities living on ancestral land before government can give the go-ahead for mining rights.

The Department of Mineral Resources cannot issue a mining right without the consent of the affected people in terms of existing legislation, Judge Anneli Basson ruled.

The Xolobeni community in the Eastern Cape, represented by the Amadiba Crisis Committee, turned to court to prevent the department from issuing a mining licence to Australian mining conglomerate Transworld Energy and Minerals (TEM) to mine the titanium-rich sand along the Wild Coast.