Whale sharks are huge, beautiful, fascinating creatures. The little information we do have does not tell us where they mate, where they birth, where young females live and what happens to adults.

We know only where a few thousand aggregate and we do know that many thousands are slaughtered for their meat every year. Despite CITES Appendix II and IUCN Red Listing (Endangered), there are no international laws that protect these sharks. Some countries have local laws that are seldom enforced.

An international code of conduct for whale shark tourism is voluntarily adhered to by a few. It should therefore be no surprise that most whale sharks that we see around Mafia Island, off the coast of Tanzania, bear the scars and wounds of human disregard and exploitation.

At Kitu Kiblu Responsible Marine Encounters, interns spend countless hours observing whale sharks. Although some interns come for only two weeks, many stay for three months, and between us we are out almost daily for nearly five months of the year. We take spot-pattern photographs for the Wildbook for Whale Sharks database, record code of conduct violations and monitor shark-human interactions.

We photograph distinctive features to track individuals and are able to distinguish new injuries from old ones – it breaks our hearts to see the ever growing evidence of abuse.

When we encounter a whale shark, usually close to shore, we first observe if the shark is relaxed or swimming erratically, feeding in a figure eight pattern, around and in plankton, or moving in a straight line. We want to know what the best way would be to interact with this animal responsibly.

If there is another boat already with the animal we usually stay on-board watching, often with a mounting sense of unease as people harass the shark. We get into the water at a discrete distance and swim quietly to the animal. A quality interaction with a wild animal in nature takes patience and respect and we are more than happy to oblige.

We start taking photos of spots, scars and wounds. We almost always find old scars or fresh wounds or both.

Whale sharks aggregate in the channel between mainland Africa and Mafia Island to feed. Unfortunately, the docile animals are so often rammed by boats, sliced by propellers and deliberately caught in large, fine-mesh sardine nets.

Fishers actively look for the whale sharks and net them because the sharks are accompanied by juvenile reef fish. The fishers’ priority is to preserve their livelihood – their net and catch, and not the shark. Many sharks are also mutilated for portions of their fins. Whale shark fins are considered inferior quality but if you cut off the tips of the dorsal and pectoral fins and dry them you get a fin, seemingly belonging to a smaller variety of shark.

It is blindingly obvious that we need to take better care of these animals, and that starts by getting more people to take note of their current mistreatment.

Scars are signs of old wounds, and one might think that the abuse is not current, but the fresh wounds we see – and the fact that scars are ever increasing – are sure signs that injuries are being produced on a regular basis.

We ask anyone who has been to swim with whale sharks in Mafia Island and has photographs of scars or wounds to please contact us and send us your photographs. 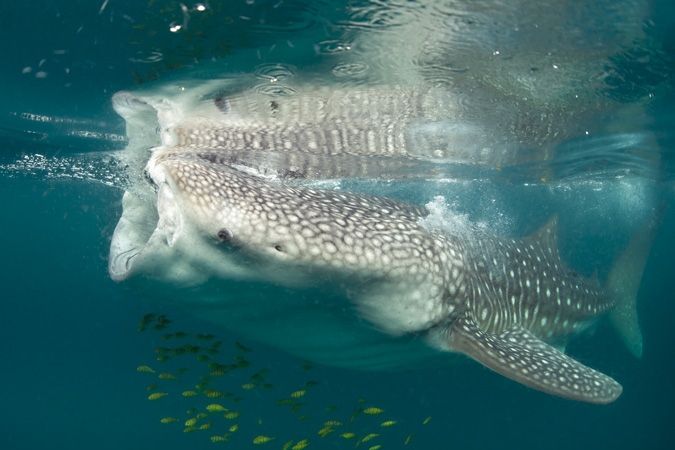