Posted on January 26, 2021 by African Parks in the News Desk post series. 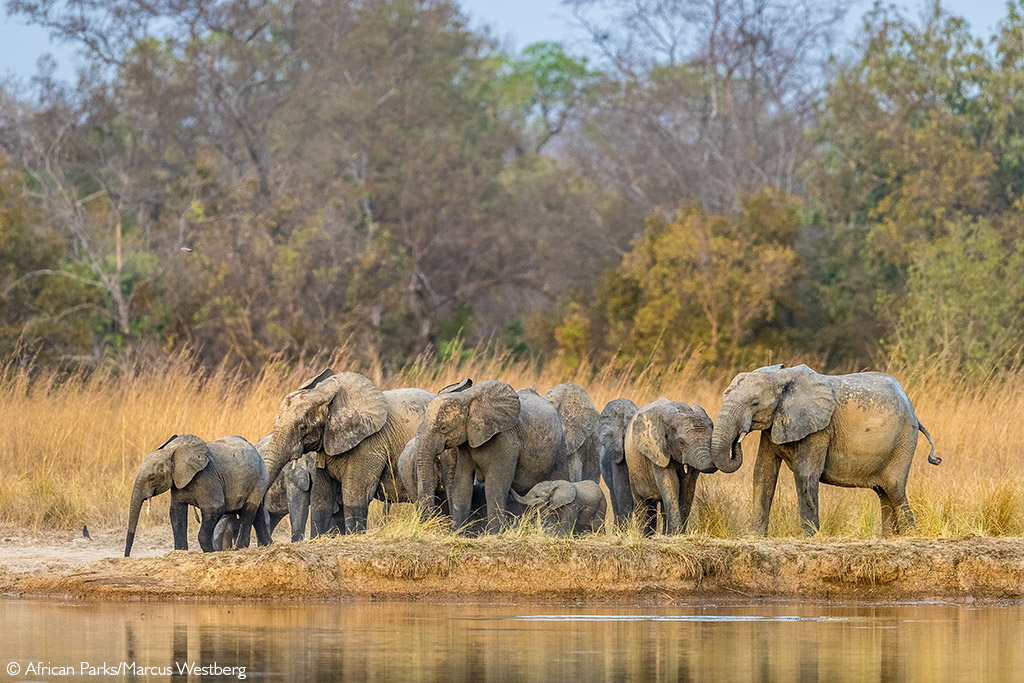 Pendjari National Park and W National Park in Benin have completed a major collaring exercise, the largest of its kind in the region, fitting satellite collars on 25 elephants and 14 antelopes to increase the surveillance and protection of these species in this transboundary landscape. Both parks are managed by conservation non-profit African Parks through a partnership with the Ministry of Living Environment and Sustainable Development, the National Agency for Heritage Promotion and Tourism Development (ANPT), and the National Centre for the Management of Wildlife Reserves (CENAGREF). They have worked together since 2017 to ensure the sustainability of these vital, connected West African ecosystems for the benefit of people and biodiversity in the region.

His Excellency the Minister of Living Environment and Sustainable Development, Mr José Tonato said, “We are taking decisive steps and utilising the most innovative tools in biodiversity conservation to ensure the effective management of our parks, enhancing their natural resources for the development of eco-tourism and the promotion of livelihoods in local communities”.

Pendjari and W in Benin form an anchoring part of the W-Arly-Pendjari (WAP) Complex – a UNESCO World Heritage Site straddling Benin, Burkina Faso and Niger. The WAP Complex is home to the largest elephant population in West Africa, in addition to the only viable populations of West African lion, cheetah and Korrigum antelope. However, its elephant population has declined over several decades due to the persistent threat of poaching, with recent surveys estimating that just over 3,250 remain in the entire WAP Complex, of which more than half are protected within Pendjari and W in Benin. Therefore, an effective monitoring system is crucial to supply accurate information on the species’ population dynamics and their threats to bolster efforts to conserve them.

The collaring exercises were attended by the Minister of Living Environment and Sustainable Development, the Prefects of Alibori, Atacora and Donga, the Director-General of CENAGREF, the Executive Director of the West African Savanah Foundation (FSOA), Forest Administration officials, Mayors and representatives of communities neighbouring the two parks.

“This operation is an important milestone for ecological monitoring in the park. It will ultimately help to improve our ability to provide long-term security for people and wildlife, ensuring that both can prosper in this profoundly valuable landscape” said the Director of Pendjari National Park, Mr Jean-Yves Koumpogue.

“Having concluded a management agreement for W National Park with the Government of Benin in July, this large collaring project is a significant development for the park” added the Director of W National Park-Benin, Mr Christophe Lemee. “It is a true testament to the commitment of every partner involved – including the Ministry of Living Environment and Sustainable Development, CENAGREF, ANPT and local communities – to preserving this natural treasure, giving it a chance to evolve into one of Benin’s greatest national assets’.

The Benin Government prioritised the revitalisation of its protected areas as a core project of its national investment programme, “Revealing Benin, ” launched in 2016. With a vision of building ecological and economic sustainability, they initiated a partnership with African Parks to manage Pendjari National Park in 2017 and manage the contiguous W National Park in 2020.

The collaring initiative was made possible thanks to the Norwegian Government’s financial support through UNESCO and the Elephant Crisis Fund for W National Park-Benin; and the support of The Wyss Foundation, Elephant Crisis Fund, The Wildcat Foundation, FSOA, National Geographic Society for Pendjari National Park. This is the largest operation of its kind implemented by African Parks in the WAP Complex.