I enter a barren land where white clay meets an ice-blue sky, marred only by a vulture that is coming in to land on a giraffe carcass. The ‘Great White Place’ gives new meaning to ‘bone dry’. At the end of a ruthless dry spell, the land is crying out for the taste of rain, but there are no signs of a storm brewing. Africa is renowned for its big skies and never more so than at Etosha.

On the ground, primal energy rules. The awkward stoop of thirsty, drinking giraffes makes them easy prey for Etosha’s lions, and carcasses lay scattered around the waterhole in various states of decay. Hyenas, jackals and vultures are queuing up for their turn at the buffet; that is if the lions leave anything behind.

A young kudu bleats, stuck up to its shoulders in the middle of the shrinking waterhole. A hyena looks on, sensing easy prey, while the kudu’s father, with his snaking horns, stands watch, and a skinny warthog tentatively drinks nearby. The young kudu makes it out safely, the hyena skulks away, and I too move on past the Etosha Pan, which is so large that it can be seen from outer space.

There is not another car in sight, and I could be forgiven for thinking that I own the land, until a stubborn rhino lets me know that he does. I understand my place and pay my respects to Namibia’s national animal as an oryx ambles past, followed by elephants of varying shades; from ivory white to ebony black – depending on which waterhole they decided to bathe in.

Members of a mongoose family go about their business, while a lazy few lie flat in the shade of a cool termite mound and a hyena drags around a zebra skin; her rotund belly scraping the ground. Damara dik-diks, which once seemed to have been out in abundance, have now seemingly disappeared, as a martial eagle picks on the remains of one of these little antelopes.

This is Etosha National Park – a unique reserve in Namibia that is home to a 100-million-year-old salt pan and a turbulent history, remembered on the monuments throughout the park’s rest camps. It is a photographer’s dream come true, a birder’s delight, a wildlife haven and a place that, for me, represents raw Africa.

What to see and how to see it

The ‘white elephants’ that garner their colour from the clay of the salt pan, which acts as a form of sunscreen and which they liberally smear over their bodies to cool down, should be at the top of anyone’s Etosha bucket list. The best place to catch a glimpse of one of these famous ‘ghosts’ is at Nebrownii waterhole, where that iconic Etosha scene will unfold before your eyes with ostriches, springbok, zebra, gemsbok, giraffe, wildebeest and zebra all congregating for their share of the life-giving waters.

If you are visiting during the dry season, it is best to hunker down at one of the many waterholes – including natural springs and man-made boreholes – and wait to see what comes for a visit. The stretch covering the Sueda, Salvadora and Rietfontein waterholes provides a wealth of sightings and we were lucky to see two lionesses with their cubs on this stretch of road.

Chudob was another winning choice for our trip, as it was situated within easy reach of the Von Lindequist Gate and our accommodation at Mokuti Etosha Lodge, which is located just outside of the national park. Here we were able to watch the wildlife come and go as the sun set in the background, while still having enough time to make it to the gate before closing.

The man-made Halali waterhole is situated at Halali Rest Camp and is a great place to sit with a sundowner or snack, and a pair of binoculars. But be careful not to leave your food unattended as a pair of honey badgers are known to go after anything they can, including your toes!
If you’re a birder, you’ll find Fisher’s Pan an absolute delight during the rainy season when the pan welcomes thousands of flamingoes, as well as other wetland birds and migratory species.

The plains between Halali and Okaukuejo camps are a great place to spot smaller creatures such as the bat-eared fox. At the same time, the western side of Etosha has recently opened to the public and provides a different type of landscape thanks to its red soil and undulating terrain. On this side of the park, you will find Hartmann’s mountain zebra, black rhino and black-faced impala.

Before visiting the park, it is essential to note the fees that are based on your nationality and vehicle. These fees are paid at the camps within the park, and proof of payment needs to be presented when exiting.

It is also important to respect the opening and closing times of the park, which are based on sunrise and sunset, and so change with the seasons.

Winter: May to October is dry season and provides the most action in Etosha as the wildlife congregates around the waterholes. This is the busiest season for visitors, due to the excellent visibility for sightings, as well as the mild weather. I visited the park in November, which is the end of the dry season in the region, but the park still had not seen any rain. While waterholes were low, the game looked healthy. However, there was little game to be seen between these sources.

Summer: The months of January and February are the height of the rainy season, and it is in these months that the usually dry salt plan of Etosha is transformed into an exquisite birder’s haven with thousands of flamingoes and migratory birds. The European bee-eater is a particular delight! However, it is harder to guarantee game sightings during this quieter period, as the animals do not need to visit the waterholes. Consequently, more driving is necessary and you can expect temperatures during the day to reach up to 40°C.

I broke the journey into two parts by stopping at Okonjima, home of the AfriCat Foundation, on the way up. At Okonjima, a variety of accommodation options are on offer, from camping to your private bush villa. Money raised from their lodgings goes to supporting the work of AfriCat, which focuses on the conservation of Namibia’s large carnivores, conservation education and the mitigation of human-wildlife conflict in Namibia. AfriCat also has another base on the south-western border of Etosha, where they are aiming to mitigate conflict between local farmers and lions. Okonjima is currently home to leopards, lions, hyenas and wild dogs – many of which have been rescued, while some are natural residents of the reserve. These carnivores, which may otherwise have been confined to a life in captivity, are given a chance to become self-sustaining in Okonjima’s protected area. And I managed to tick three of Namibia’s big cats off my list before I even reached Etosha. This was great as it meant that I wasn’t so focused on predator sightings during my time in the national park, and the shorter drive also meant that I had time to enter the park through Anderson Gate and spend the rest of the day driving to exit at Von Lindequist Gate near Namutoni, where Mokuti Etosha Lodge was awaiting my arrival. 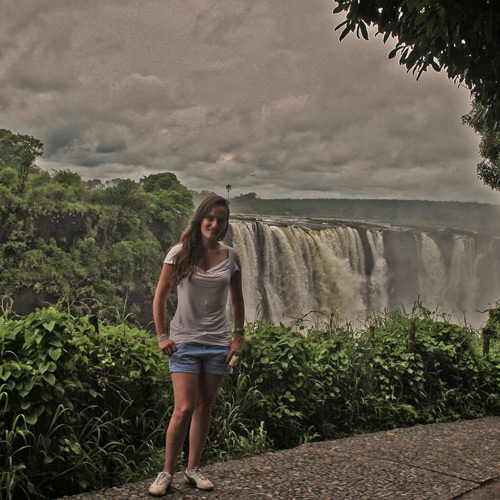 JANINE AVERY is the first to confess that she has been bitten by the travel bug… badly. She is a lover of all things travel, from basic tenting with creepy crawlies to lazing in luxury lodges – she will give it all a go. Janine is passionate about wildlife and conservation and comes from a long line of biologists, researchers and botanists.