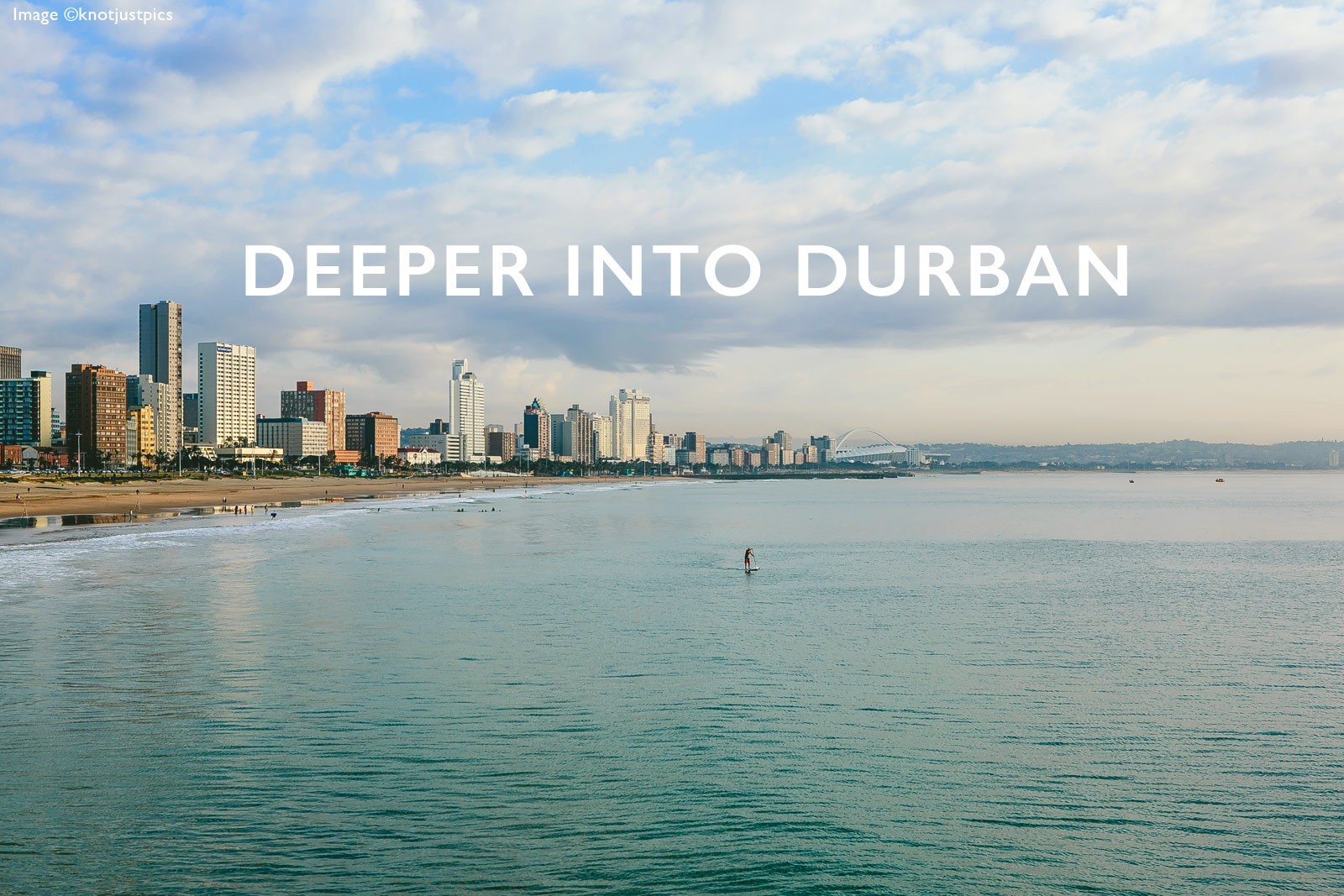 GETTING UNDER THE SKIN OF SOUTH AFRICA'S VIBRANT EAST COAST CITY

Previously if you had asked us where we would want to go on holiday, our home city of Durban wouldn’t be high on our list. Durban has a reputation for being the less attractive step sister of Cape Town and we’ve always taken it for granted. But we recently discovered, with a stay-at-home vacation, that Durban is very easy to fall in love with.

A vibey start to a “staycation”

To ease us into the “staycation” concept, our adventure began at the vibey Unity Brasserie & Bar. Durban has a reputation for being quiet on weeknights, and Unity proved that wrong by being packed at 6 pm on a rainy Tuesday night. We were treated to a local beer tasting courtesy of That Brewing Co., then dived into our new favourite brew “Beasts of the Deep”. To stave off any hangovers, we also tucked into outstanding veg burgers, and their gourmet bunnies are the stuff of legends.

Our beer buzz on, we made a late check-in to our home for the next two nights. The Concierge Boutique Bungalows shares premises with the innovative Freedom Cafe which is made out of two bright red shipping containers. We did not expect to find the colourful art explosion that burst out of our room as we opened the door, and loved the daschund-inspired graphics and wine. Our room opened out onto our own partitioned patio garden, so we felt like we were in an exotic Henri Rousseau painting when our doors were open.

An old neighbourhood with a tasty new vibe

The next morning, after a good strong cup of coffee on our private patio, we arrived at what must be one of the regeneration cornerstones of the Glenwood neighbourhood – The Corner Café. Editorial note: Corner Cafe has subsequently closed.  Founder Judd has become something of a Durban institution himself, building on his ethos of seasonal and locally grown produce served in the warm and homely atmosphere of the Café.

Tucked away in the depths of Glenwood is another local legend, 36o3, a cosy sibling run restaurant that has built a reputation for some of the most vibrant and innovative food in Durban. We don’t usually seek out the chef to compliment them, but Andy felt like he needed to give Brett Gentles a big hug after what was the best meal we have ever eaten in Durban, or South Africa.

One morning we were lucky enough to get a table at the always bustling Glenwood Bakery, surrounded by the aromas of freshly baked artisanal bread.

We often found ourselves filling our faces in the tasty Glenwood neighbourhood before heading out for the day to see what Durban had to show us.

Having a ball in the
Valley of a Thousand Hills

A twenty-minute drive from Glenwood found us in the Valley of a Thousand Hills surrounded by what looked like giant hamster balls. There are two types of balls, officially known as Groovy Balls – an Aqua Ball, aka “Washing Machine”, and a Harness Ball, aka “Tumble Dryer”. We both jumped inside the washing machine and linked arms to prevent head-on collisions. After throwing a bucket of warm water in with us, we were rolled down a hill for an intense 27-second churn in what feels like a giant slip ’n slide. This will definitely whet any adrenaline junkie’s appetite!

With every turn of the spiralling road, we delved into a Durban we knew nothing about

An incredible homemade lunch was had at Kloof’s famous Sprigs restaurant, then we headed deeper into the hills. Our next adventure was in the rural village of isiThumba, and with every turn of the spiralling road, we delved into a Durban we knew nothing about and felt the anticipation we usually get when arriving in exotic and far-flung places.

Our guide Nhlakanipho, from Durban Green Corridor, spent the afternoon with us in the village of his birth and proudly shared stories of the area and the people who live here. He explained that isiThumba means “kidnapping” and that it is named after the mountain above the valley. According to legend, after some local herdsmen disappeared, their chief, wanting to avoid a war with the neighbouring village suspected of killing the herdsmen, told the community that the men had been kidnapped by the mountain and that they should avoid that area at all costs. While the story may have passed into folklore, the name remains.

Venturing into the heart of the Inanda Valley, the great people of Durban Green Corridor took us to see one of the most unique attractions in Durban: the Rasta Caves. After a long walk and steep ascent along the cliff face near the uMzinyathi Waterfall, we found ourselves beneath a huge rock overhang. The cave walls are decorated with paintings and Rasta scriptures. Until recently, a community of Rastafarians lived and worshipped here. While nosy tourists like ourselves have largely chased them off, we were fortunate enough to meet 17-year-old Shadow Shakes, who looks after the caves and lives there in solitude, worshipping Jah.

Feeling Irie, and having spent some time in Ethiopia and fallen in love with their food, it was a delight to sit in the home of Habesha back in Glenwood that evening where we relived the magical energy of Ethiopia and North African cuisine. A good shiro wot (spicy chickpea stew), injera (the spongy pancake-like accompaniment to all Ethiopian meals) and a cup of buna (strong, aromatic Ethiopian coffee) was the perfect way to end an exhausting yet enlightening day.

Walking on water for the best view of Durban

Being a terrible human before 10 am, the idea of Stand-Up-Paddle boarding at sunrise was something I (Szerdi) was dreading. Luckily we had the vibrant Charlotte from Xpressions and the flattest sea I have ever seen. After a quick lesson on the beach, we struck out for open water only to be dumped by an ankle-high wave; finally, I was awake and ready to see Durban from the sea.

After that wobbly start, and a stance that resembled someone hovering over a port-a-loo, I finally got the feel of it and “SUPed” forth. Seeing the beauty of the city from such an unusual vantage point truly took my breath away.

While you’re at the beach, one of the best ways for couples to explore Durban’s seafront promenade is on a tandem from Bike and Bean. Despite being the middle of winter, Durban weather is relatively warm and locals keep in shape throughout the year, so we rode along with many other riders and runners. Once back at Bike and Bean we recharged with muffins and coffee while taking in the unspoilt sea view.

The South Asia of South Africa

You can’t but love Durban’s South Asian influence, and the Bangladesh market tucked away in the suburb of Chatsworth is a must. Walking down the market isles you’re struck with sensory overload. Not only was there so much to see, hear, smell and taste, but we ended up chatting to friendly stall owners and shoppers as we wandered through the vibrant market.

Down the road is the Hare Krishna temple. The Temple of Understanding, as it’s known, is hard to miss with its three gold-tipped towers. The temple’s restaurant is famous in Durban for its vegetarian meals, and after spending a good deal of time sampling pretty much everything, we were lucky enough to be in time for a ceremony known as the Raj Bhoga-arati.

The burning of incense and rhythmic drumming brings devotees into the centre of the temple where they await the unveiling of curtains that reveal statues of their gods, to which they sing while receiving a blessing. The chanting, drumming and burning incense that filled the great hall created a powerfully calming atmosphere.

One evening we found ourselves at one of Durban’s best-kept secrets, Palki. Tucked away in an old Berea house, this restaurant has been serving authentic Indian cuisine for eighteen years and has become a favourite with Durban’s Indian community, as well as a growing number of people keen to expand their culinary horizons. With our tummies full of spicy goodness, we ventured across the (Umgeni) River for our night at the luxurious Three Cities Auberge Hollandaise Guesthouse. Being regular travellers, our idea of luxury is our own toilet and hot water, but here our room was almost half the size of our entire house, and we felt completely rejuvenated by the luxury of it all.

Leaving the luxury behind, we headed for the vibrance of downtown Durban. As sheltered suburbanites, it’s embarrassing to admit that this is one area we have been dying to explore but lacked the nerve to do so. What’s strange is that everywhere else we travel we are usually the first to seek out and explore the rougher areas, but home-based prejudices seemed to be the hardest to break. We are so glad we finally did. Seeing this part of Durban really illustrates what a melting pot of African and international cultures Durban is and engaging with the street life of our city was one of the turning points for turning the crush we had on this city into a fully-fledged love affair.

We ultimately met up with Stembiso and Jonas, owners of the energetic and bespoke Street Scene Tours, who took us on a passion-filled, shebeen hopping tour of the KwaMashu township. Ste’s passion for his hometown and his depth of historical knowledge saw us visiting the homes of Mahatma Gandhi and the Ohlange school where Nelson Mandela cast his historic vote in the 1994 elections.
What made this tour so special was meeting people like Mandla, an IEC worker who was the first person to shake Mandela’s hand on the day of the election, and whose story left us with goosebumps and tears; and the personal relationships Street Scene has built up with the community. After a few quarts at the shebeens, which certainly enhanced our passion for Durban, we ended our day and exploration of our city with a Durban classic: a beans bunny chow at the Britannia, Durban’s oldest hotel.

Durban moves up a notch on the “Go-to” list

In hindsight, we were naive to think that a staycation in our own city wouldn’t show us anything we didn’t already know. We’ve always had a lukewarm admiration for our city – the same fondness for that ugly but warm sweater you don’t wear anywhere else but home. But Durban proved us wrong. Now, when talking other travellers, our “go-to” list of cool South African places won’t be limited to the Kruger National Park and Cape Town; our Durban will have pride of place. 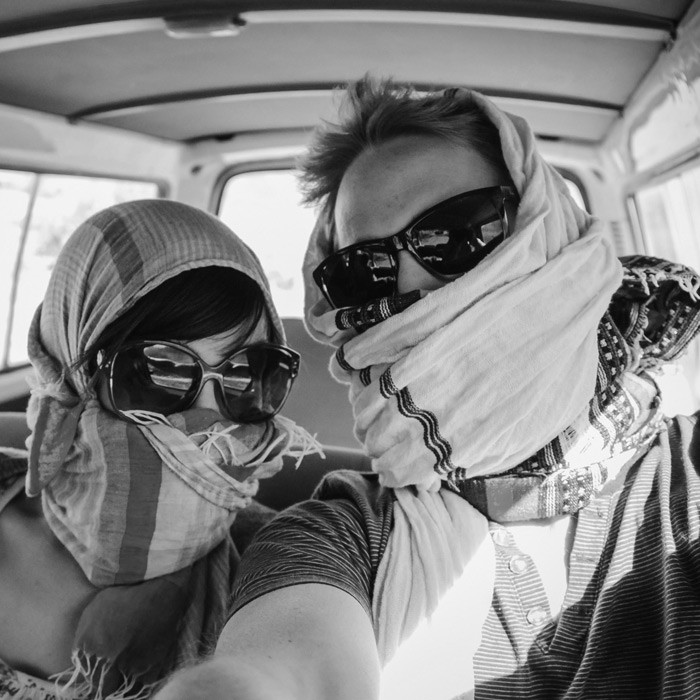 ANDY STENT AND SZERDI NAGY are a married photographic team intent on exploring and discovering as much of our incredible world as they can. Their passion for travel was sparked when they travelled to Nepal in 2010 and since then they have used their wedding photography business to fund their adventures. They love exploring Africa in their trusty Land Rover, Murray, and having the chance to meet and interact with people from all over the world. They also have a quest to find the most beautiful campsite on the planet.