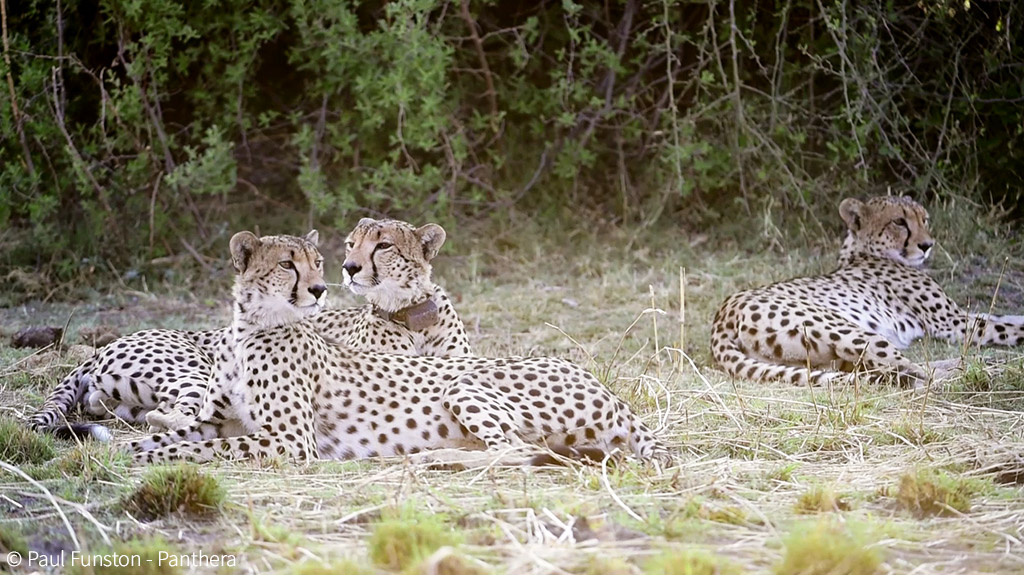 A coalition of male cheetahs has attracted the attention of various research organizations, who watched in amazement as the cheetahs set off on a journey that took them across international borders in search of a territory.

Panthera, the global wild cat conservation organization, describes how they have been working with other research groups including the Botswana Predator Conservation Trust, Kwando Carnivore Project, and the WWF to share research, information and conservation efforts as part of the KAZA Carnivore Conservation Coalition. The cheetah males were initially discovered by researchers in the Nkasa Rupara National Park in Namibia and, when they were about a year and a half old, scientists from the Kwando Carnivore Program immobilized and fitted one individual with a tracking collar. He was nicknamed Rupara, and the other two were dubbed Nkasa and Mudumu.

Male cheetahs often form coalitions, which usually (but not always) consist of littermates, meaning that the three cheetahs are most likely brothers. Sadly, Mudumu disappeared during their travels and, while it is impossible to say for sure, researchers from Panthera believe that the cause was most likely anthropogenic, mainly because the coalition was recorded as spending time near a busy road.

Using the data from Rupara’s collar, researchers watched as the cheetahs moved around Mudumu and Nkasa Rupara national parks, reinforcing the suspicion that they may have been born somewhere in that region. Then, in March 2020, the cheetah crossed the Kwando River and moved into Botswana. Their 10-day journey led them along the Selinda Spillway, into Vumbura (where tourist guides spotted them) and through the Khwai Concession and Moremi Game Reserve. Rupara and Nkasa were once again identified by Megan Claas and Ed van Mourik of the Botswana Predator Conservation Trust in May 2020. They were observed displaying territorial behaviours like scent-marking, suggesting that the two boys intend to settle in the Okavango Delta. As Dr Funston, the Southern Africa Regional Director of Panthera’s Lion Program, explains, male cheetahs select territories based on the area’s potential value to females moving across massive home ranges.

As Rupara and Nkasa have moved across enormous areas, following an instinct to disperse and find a suitable territory, the two males have provided an obvious example of why these vast regions of connected, protected areas are so important to conservation and genetic diversity. Though unwittingly, they have also nurtured important partnerships between research organizations working towards the same goal. The information obtained on their movements helps to advance understanding as to cheetah dispersal and, as Panthera explains, “conservation scientists, researchers and practitioners are using this research to foster real conservation outcomes in this remarkable transfrontier conservation area”.