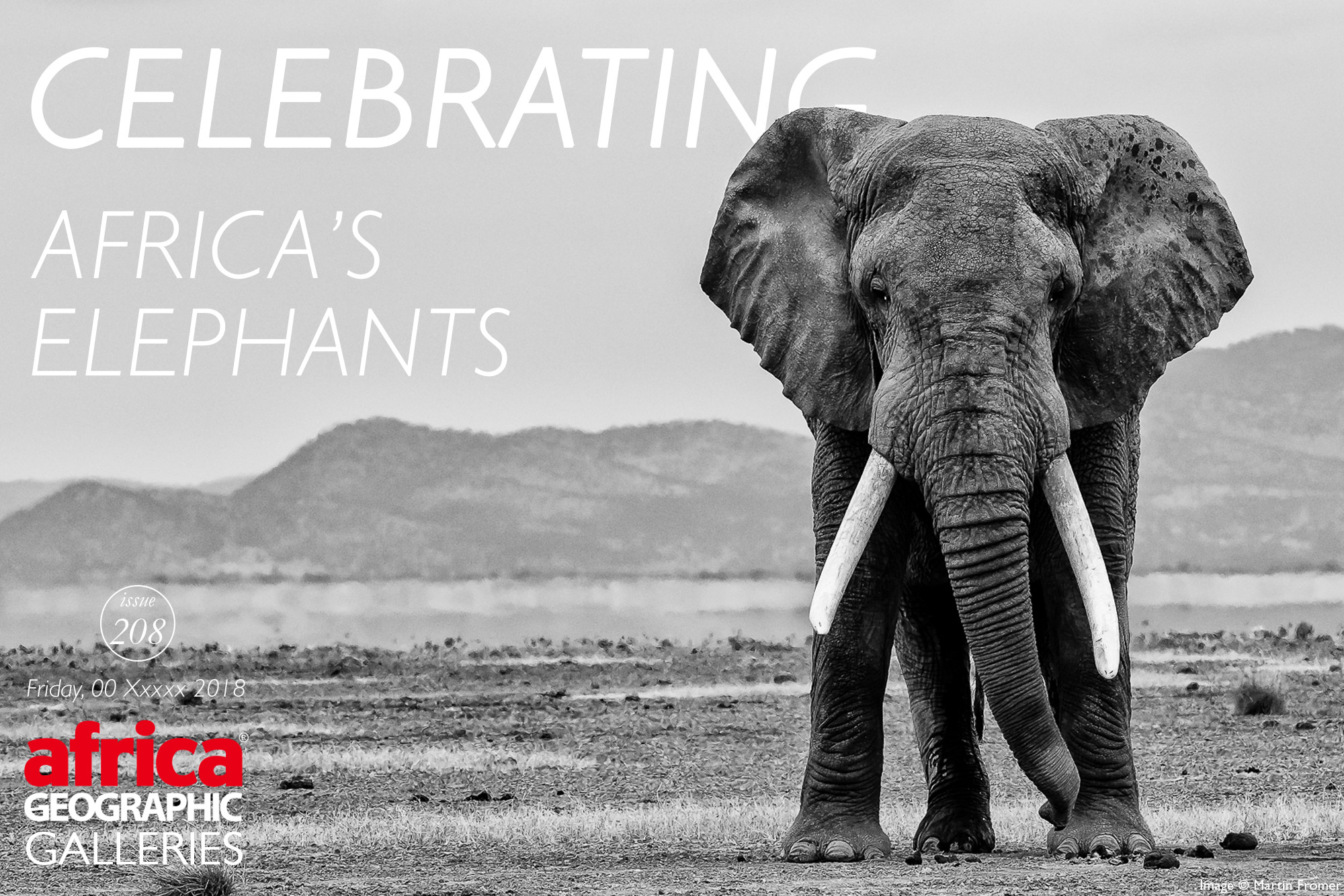 The African elephant (Loxodonta africana) is one of the most easily recognisable animals in the whole wide world. They once roamed across most of the continent from the northern Mediterranean coast to the southern tip, but they are now confined to a much smaller range in eastern and southern Africa, with the highest densities found in Botswana, Tanzania, Zimbabwe, Kenya, Zambia and South Africa. For many people, elephants epitomise an African safari. Their big stature, tactile trunks, and human-like qualities make them a point of interest for both avid and novice safari-goers alike.
In this gallery, Celebrating African Elephants, we are sharing with you some incredible photos of these giant pachyderms, taken by photographers who entered our Photographer of the Year 2017 and 2018 competitions. 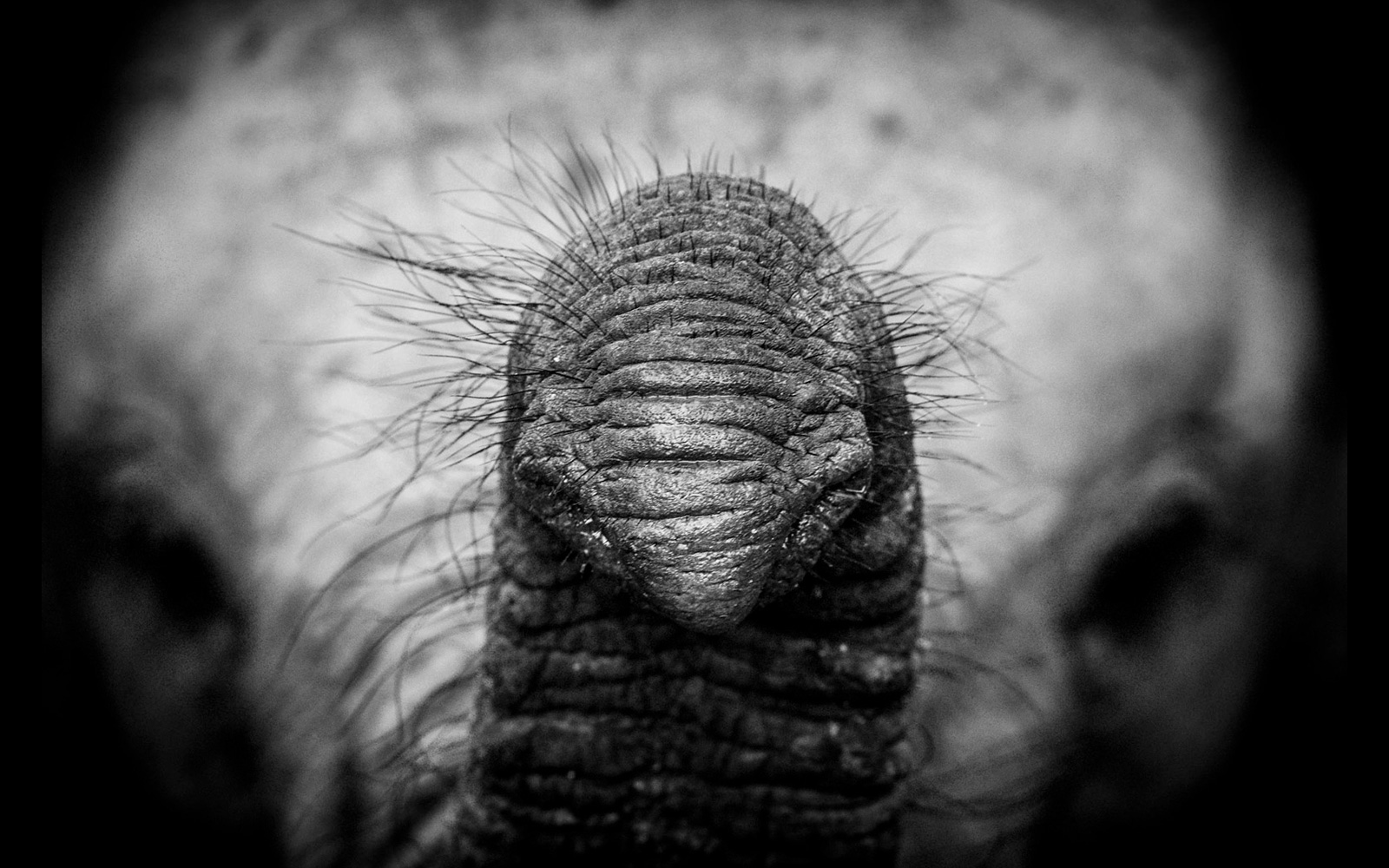 “While on safari, I came across a small breeding herd of elephants. We were stationary in a small narrow valley, and the elephants slowly started to move past us in very close quarters. While I was watching, this small elephant calf approached the vehicle and slowly lifted his trunk to get a scent of these strange creatures in the metal object mere inches away. It was great to create this image showing the inquisitive nature of the baby elephant.” ~ Andrew Aveley 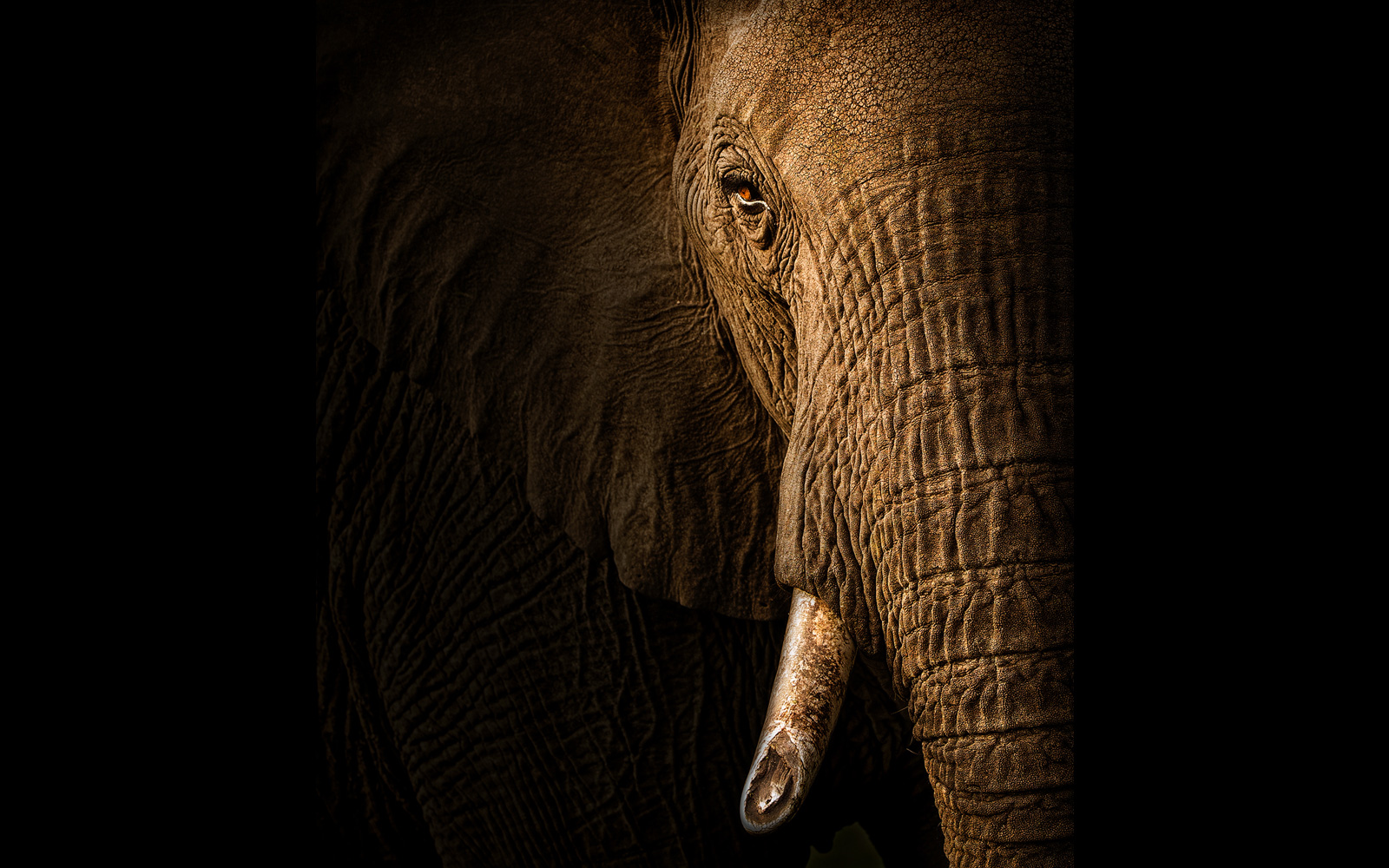 📷  “Broken” – an elephant with a broken tusk in Maasai Mara National Reserve, Kenya © Andy Howe (Photographer of the Year 2018 entrant)

An in-depth study of the African elephant’s wrinkly skin has revealed how its intricate design helps to keep the animal cool, protect it from parasites and prevent dehydration. Read about the study here 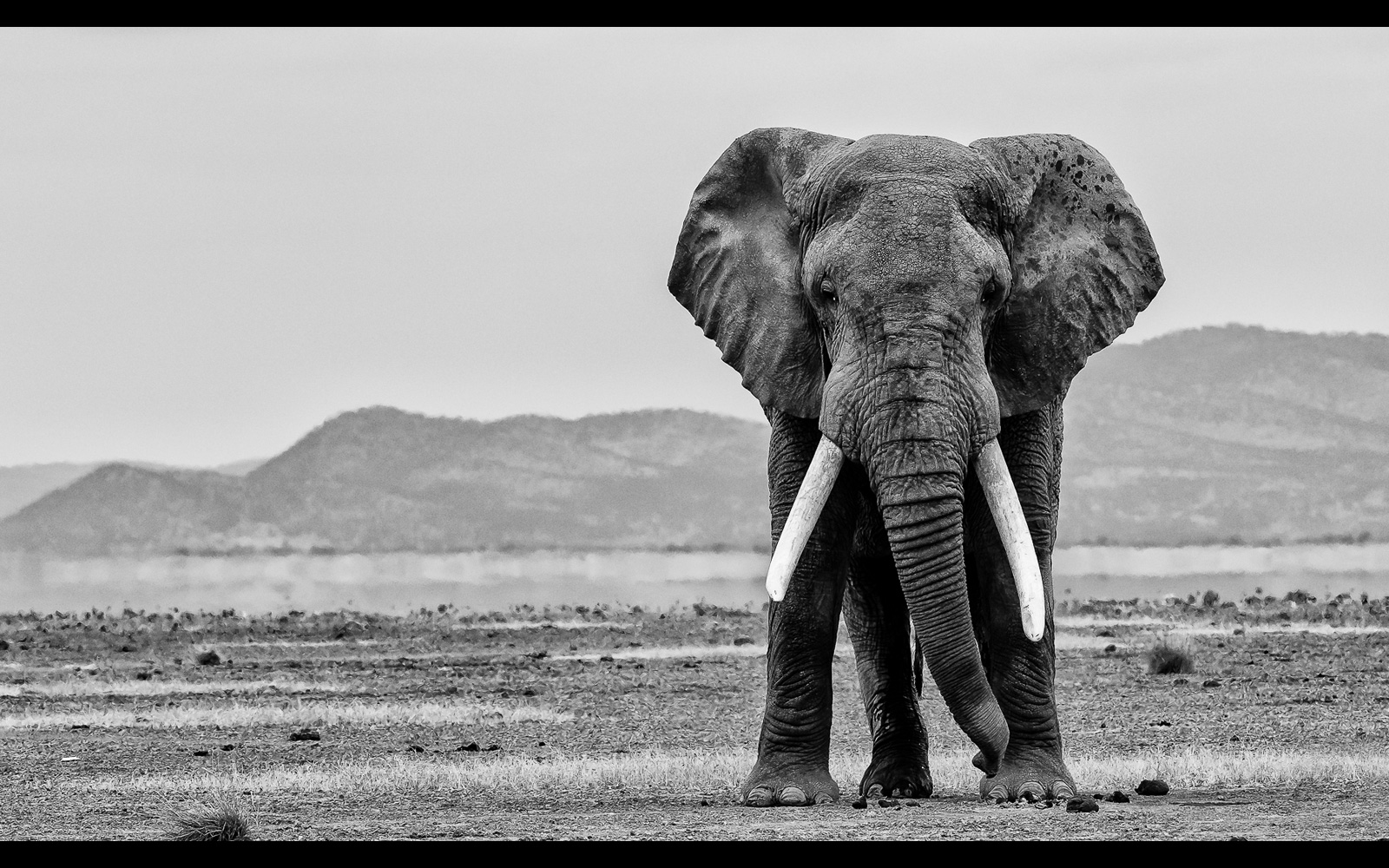 Elephants live for 50 to 70 years. Bulls only start contributing to the gene pools at 35 to 40 years old and cows start breeding at 12 to 14 years old. Cows undergo the longest gestation period of all mammals – they are pregnant for 22 months. 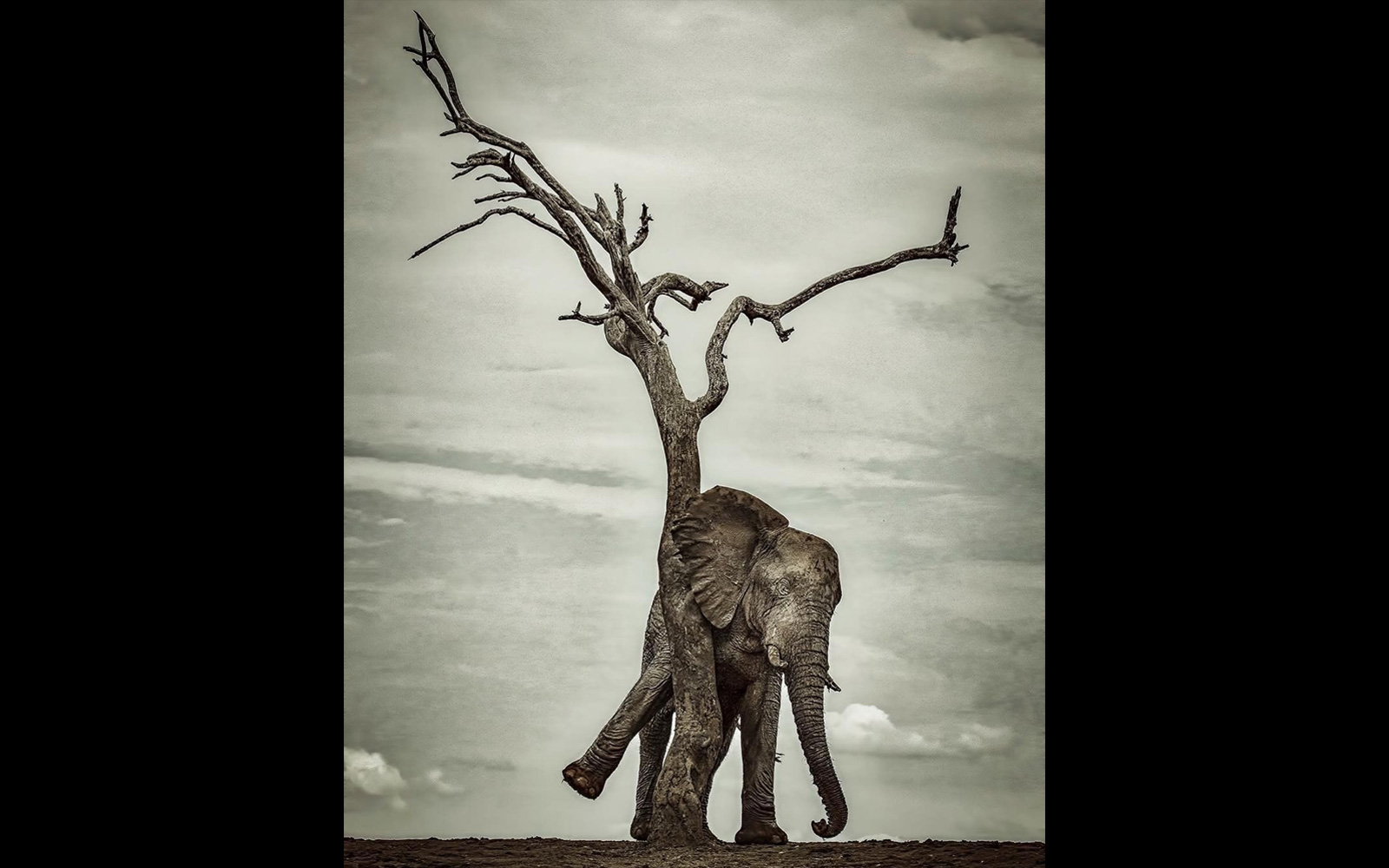 Elephants can detect seismic signals via their feet, through the leg and shoulder bones and into the middle ear. They communicate with each other over distances up to 10 km via low-frequency rumbles, again picked up via the feet. 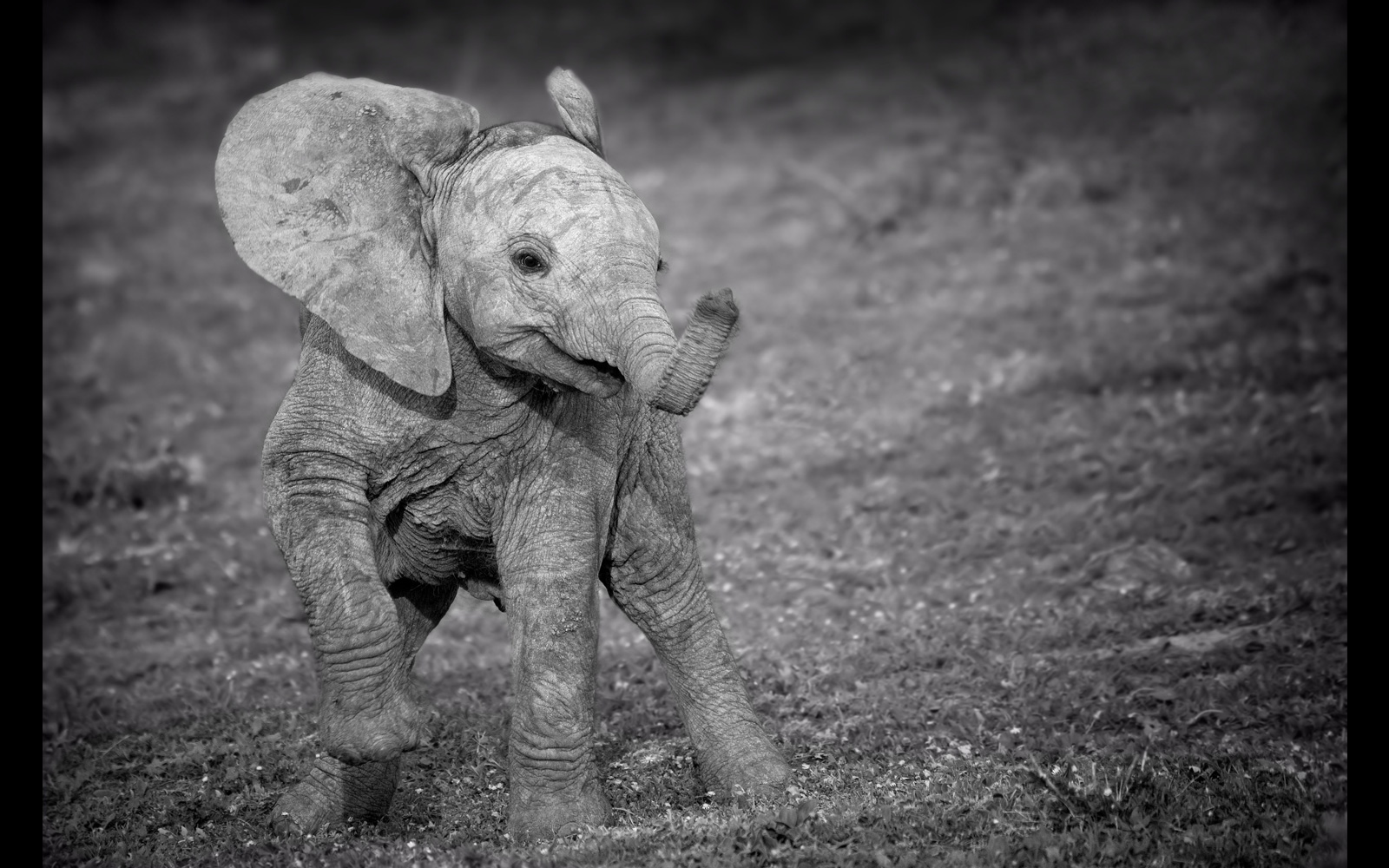 “We visited the Addo Elephant National Park and were photographing the elephants at Hapoor dam. There were three babies in the herd, but this one was the eldest. He was chasing anything that moved around him, no matter how big or small. He had also discovered his trunk and was turning and tossing his head while his trunk swung in every direction – he seemed to enjoy this tremendously.” ~ Annette Heymans 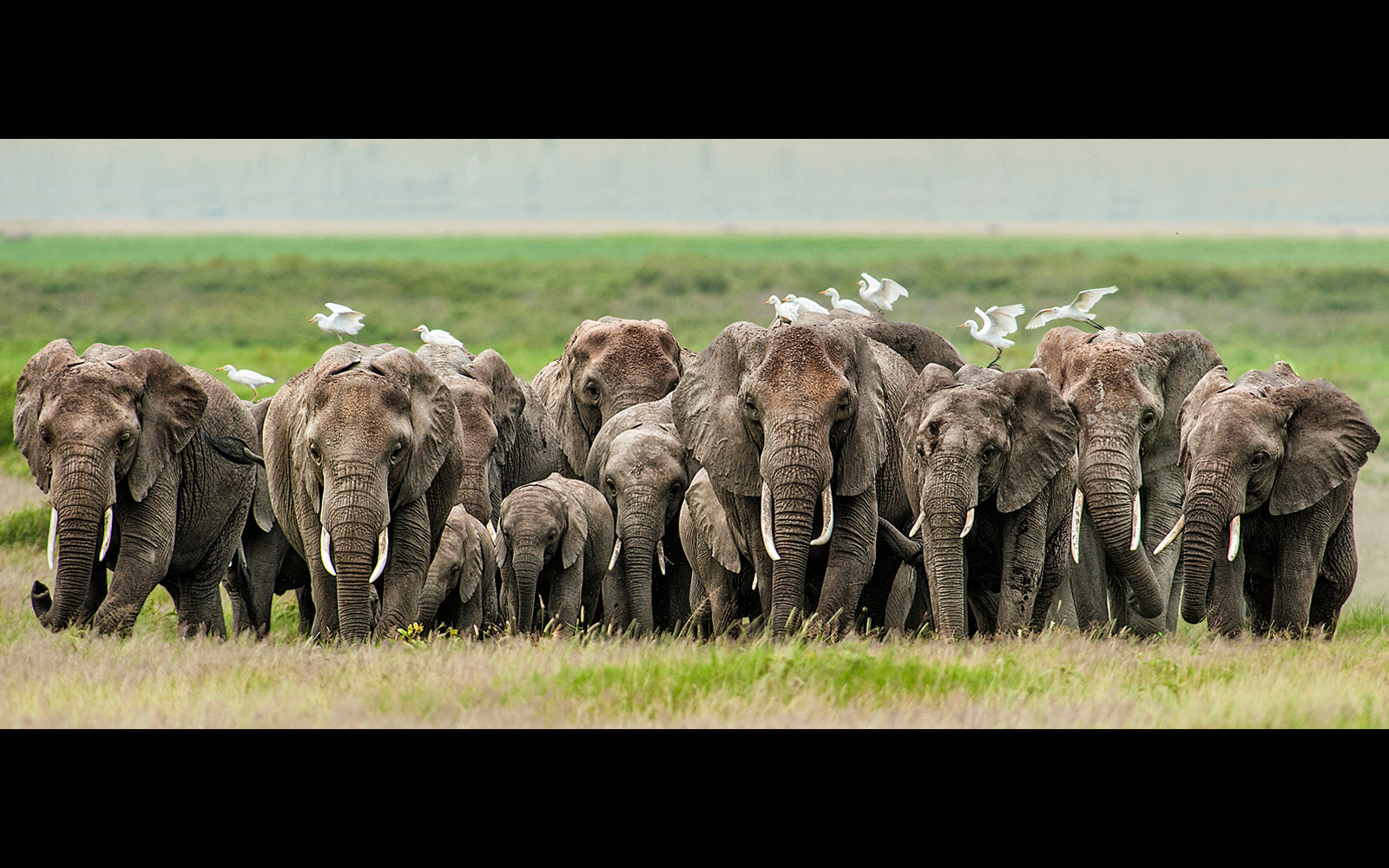 “The Amboseli National Park in Kenya has the biggest herds of elephants in Africa. When we were there, I saw from afar a large elephant family coming directly towards us, heading for the swamp that was just behind us. This photo is the only one I got when all the elephants were looking head-on.” ~ Brigitta Moser 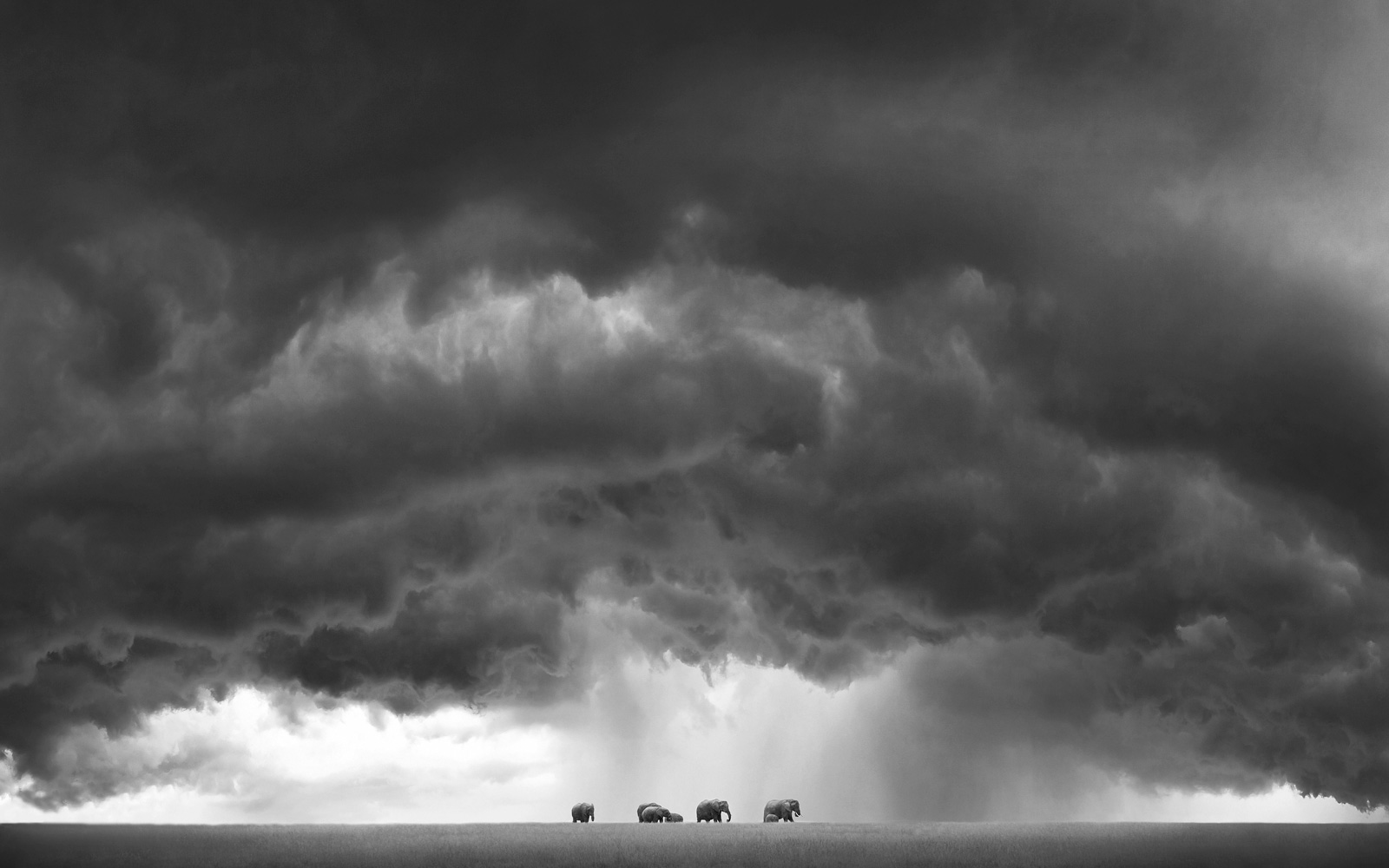 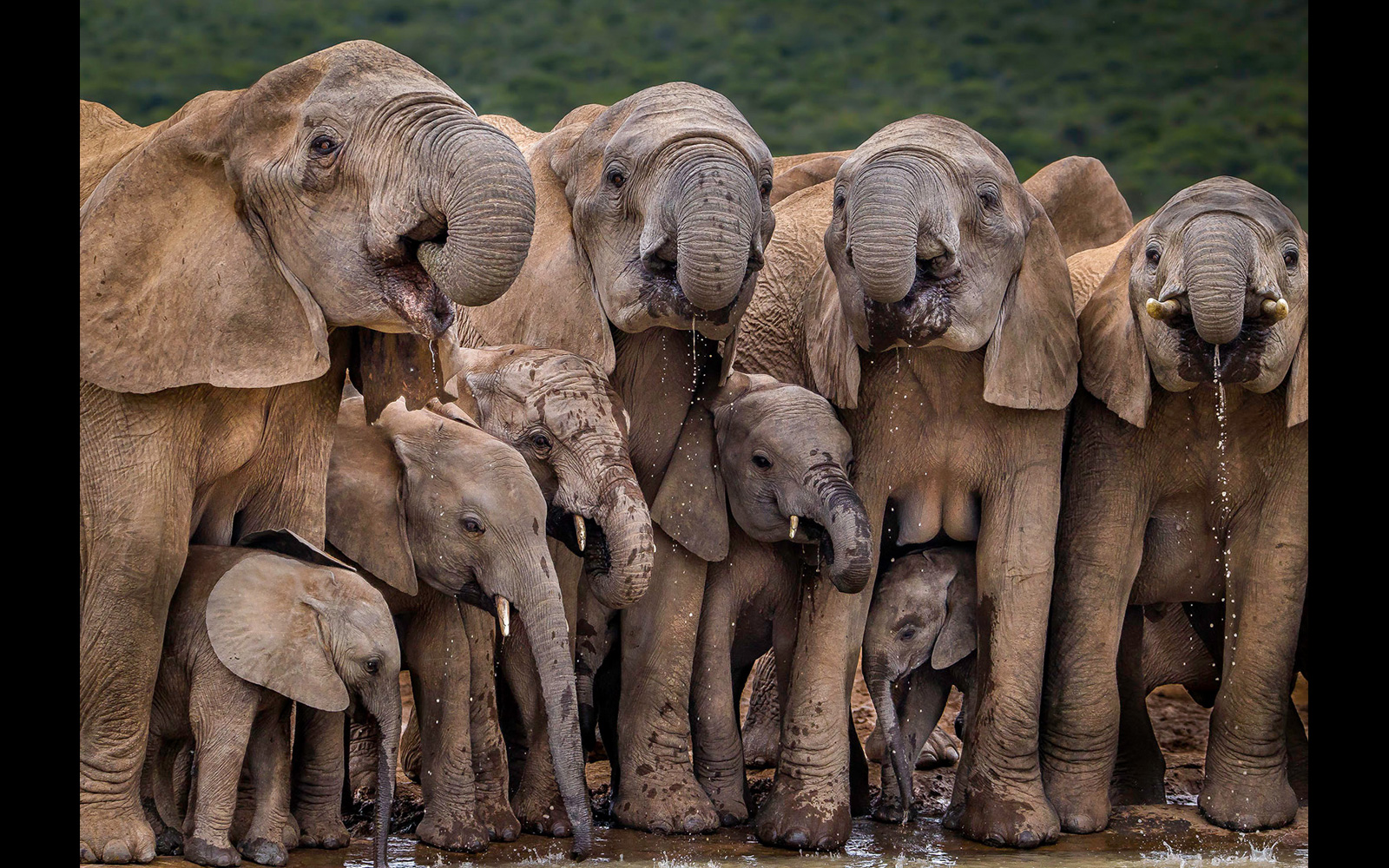 There are about 50,000 muscles in an elephant’s trunk, made up of six muscle groups, and no bones. This compares to 639 muscles in the entire human body! The closest thing we have to an elephant’s trunk is our tongue. Elephants use their trunks to breathe, drink, eat, smell, snorkel, wrestle, communicate, touch, feel, hold, grab and pull. We can’t think of any other appendage that is so versatile. 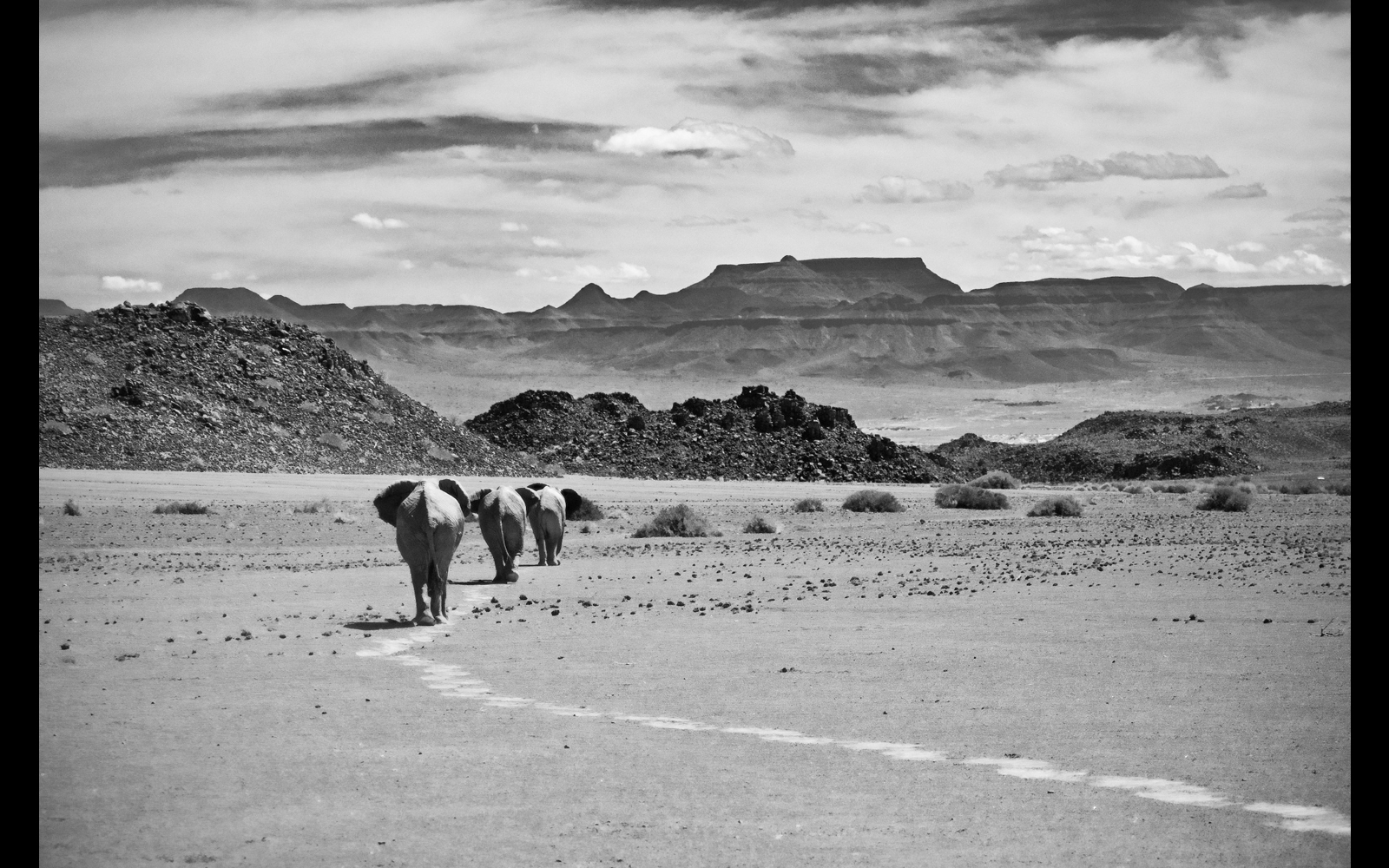 “It was after the heavy rains in Namibia when I saw these elephants travelling on the dry, arid land from the mountains towards the Huab River in search of vegetation.” ~ Norman Victor 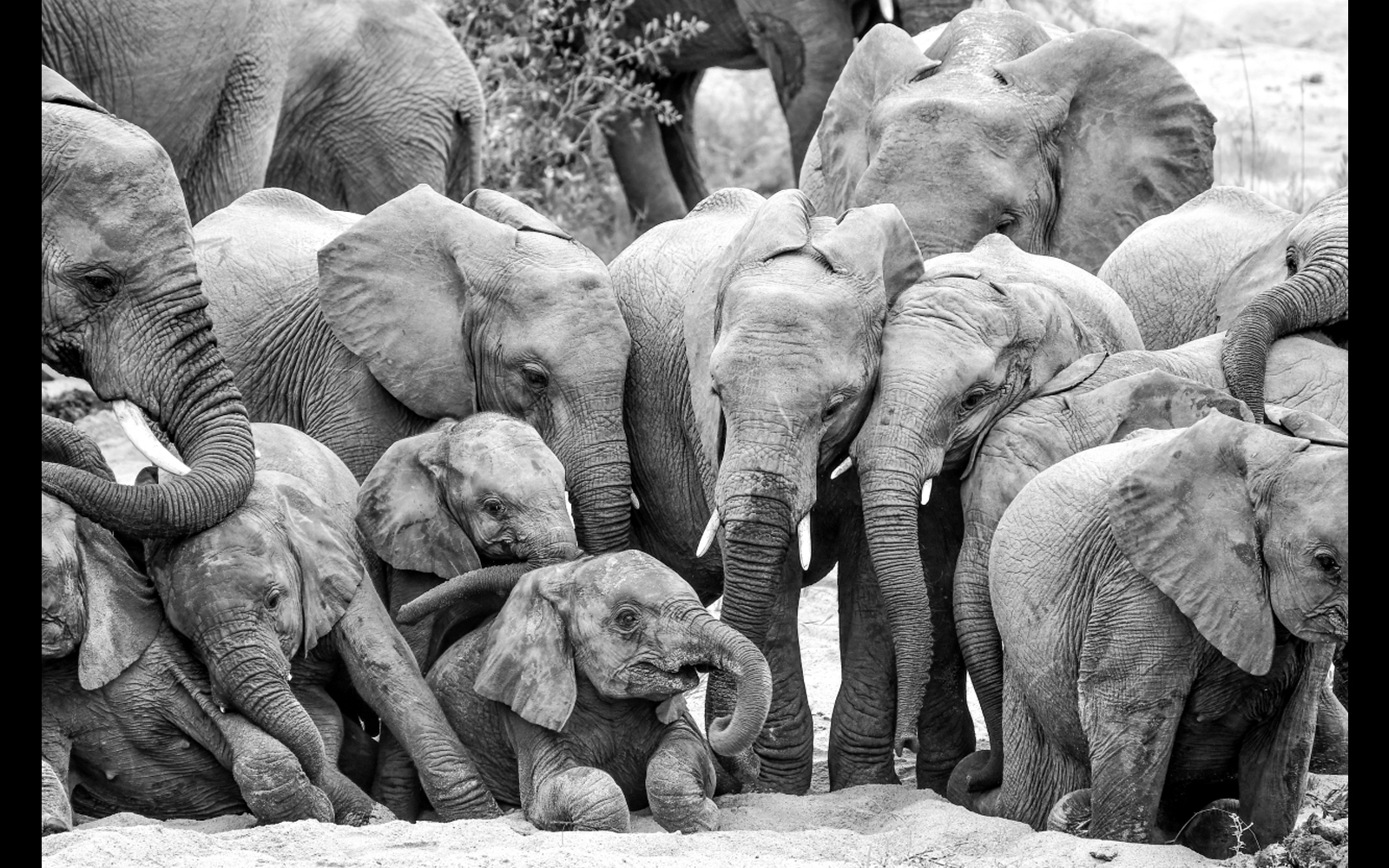 📷  A herd of elephants dig for water in a dry riverbed in Kruger National Park, South Africa © Arno Pietersen (Photographer of the Year 2018 entrant) 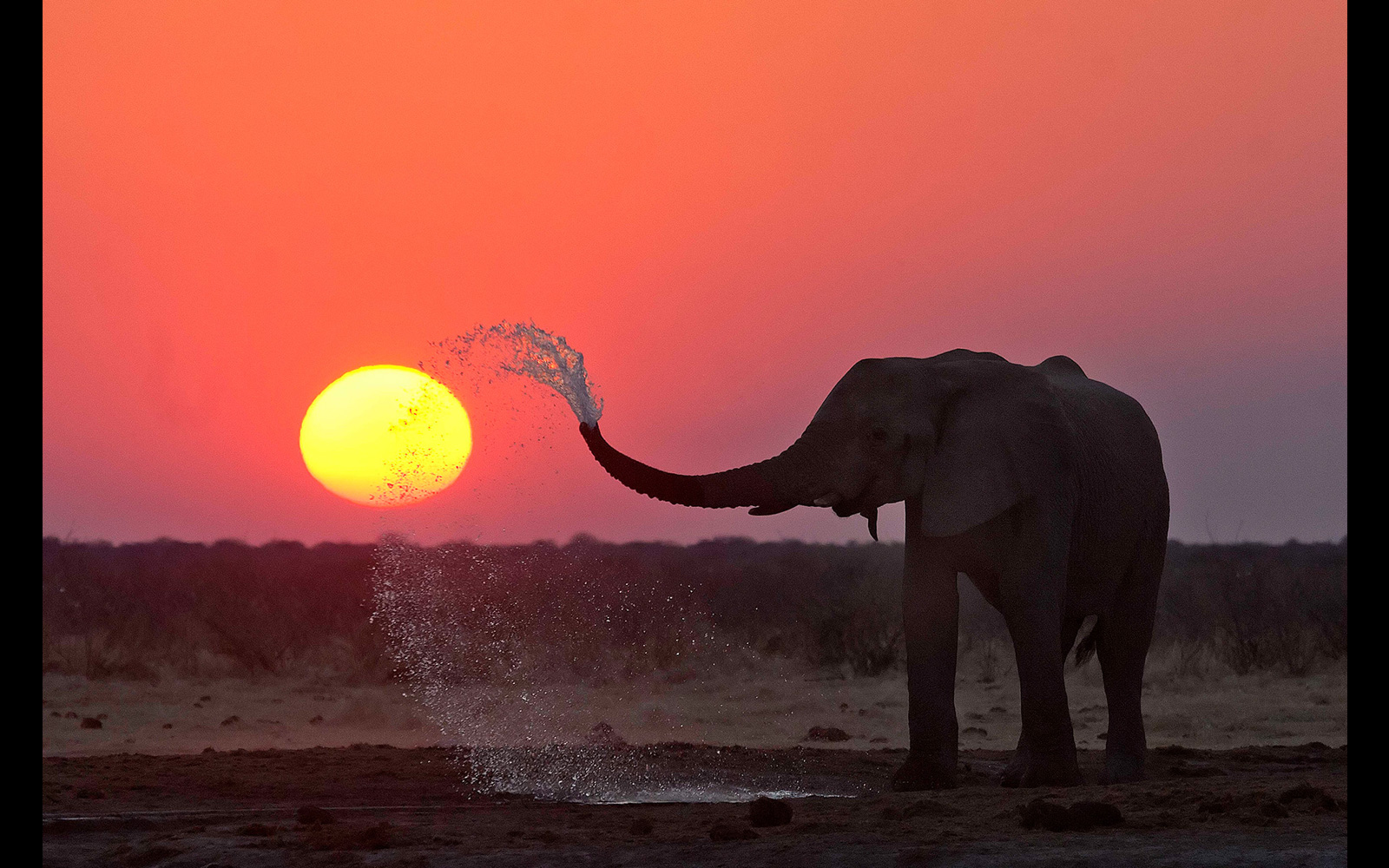 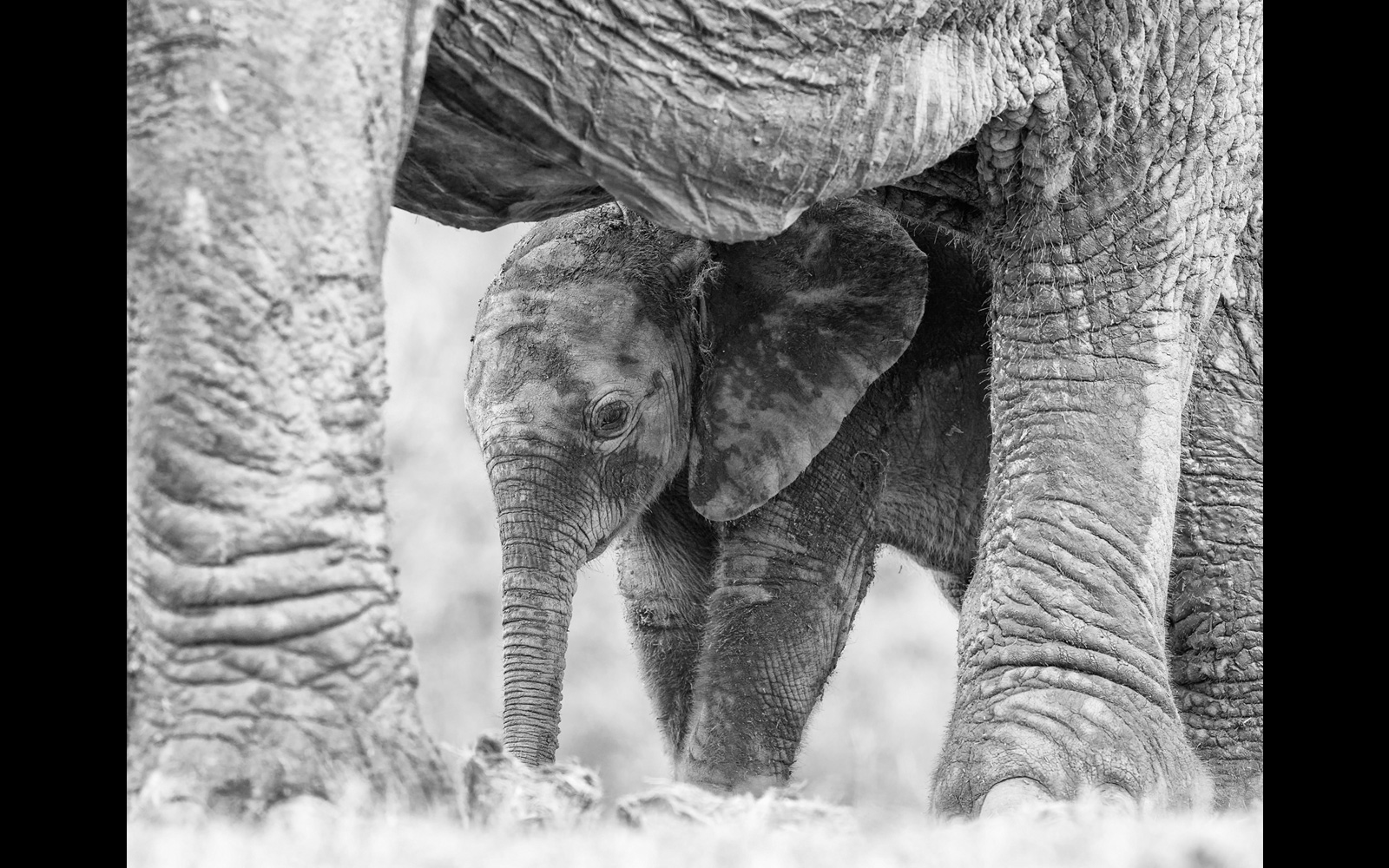 A baby elephant is called a calf. It weighs about 250 pounds at birth and stands about three feet tall. Calves can’t see very well at first, but they can recognise their mothers by touch, scent, and sound. 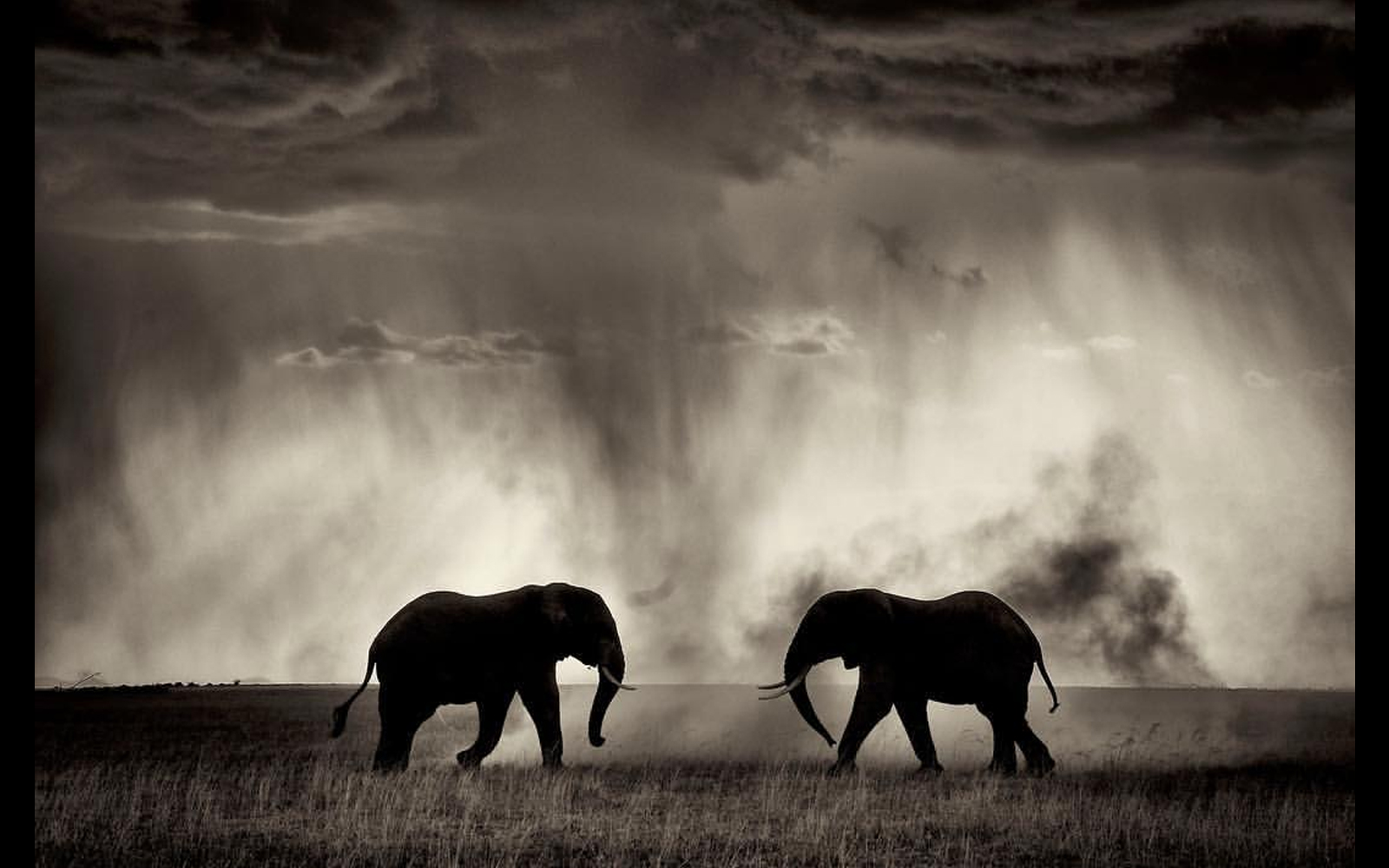 “I watched these two bulls sparring for over an hour on the edge of the lakebed in Amboseli. At first, there were clear skies and then a huge storm built up above and around them. What with the dust, the clouds, the light, the drama and the action, it was truly an incredible scene, and I was lucky to pop off a few shots before they eventually moved off.” ~ Andrew Campbell 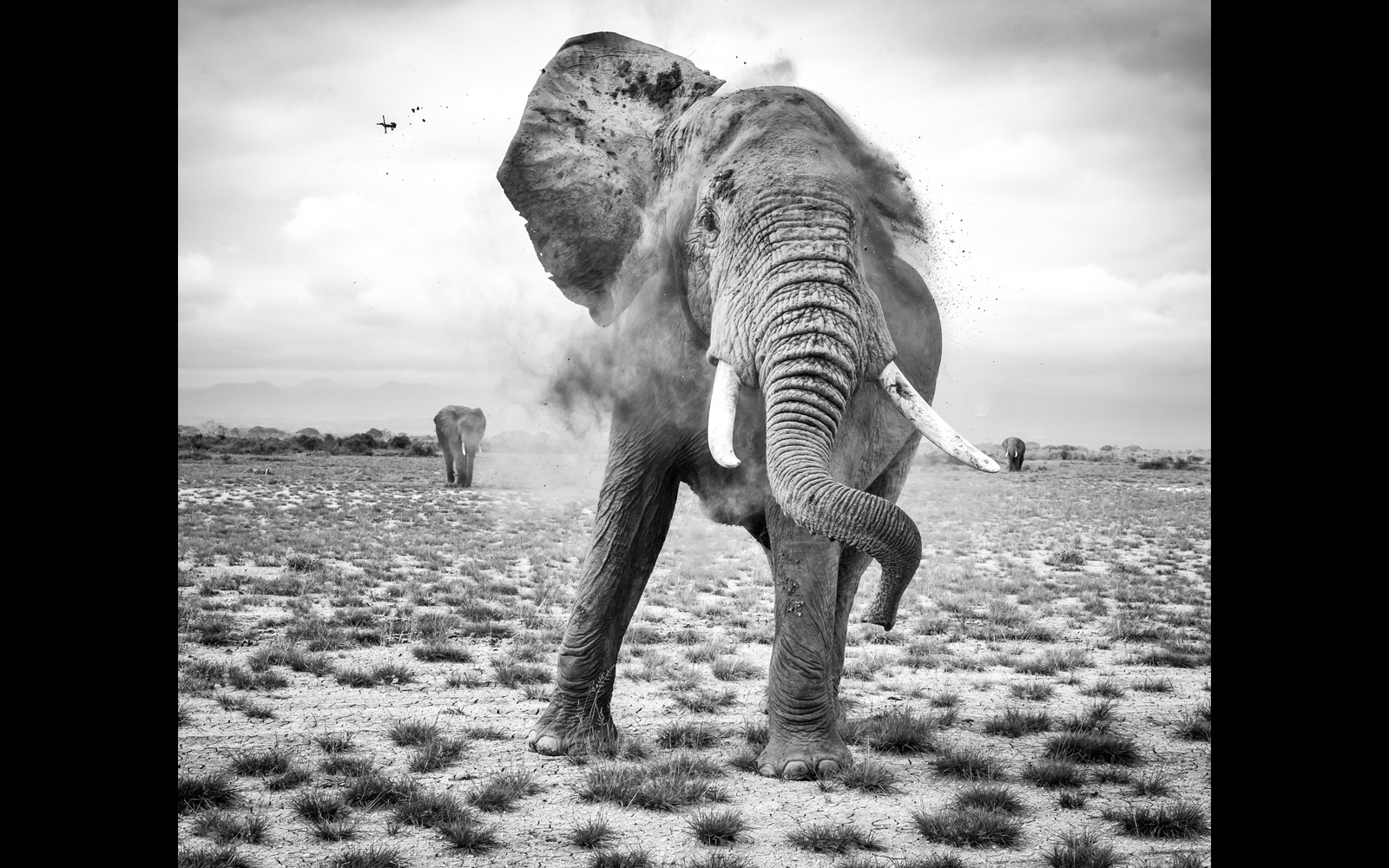 “Amboseli is the ultimate canvas in which to encounter elephants in their natural environment. In this photograph, the bull, who was in musth, is mock-charging our vehicle, coming within metres of us and moving with aggressive intent. He continued his antics, displaying signs of displeasure by stomping his feet and violently shaking his head from side to side. It was a compelling display of a 12,000-pound giant’s fury. Heart racing and adrenaline high, I managed to keep composure and capture the image of his violent display as dust and mud flew all about him. Nothing compares to coming face-to-face with a force of nature like this elephant’s unleashed fury.” ~ Dana Kennedy 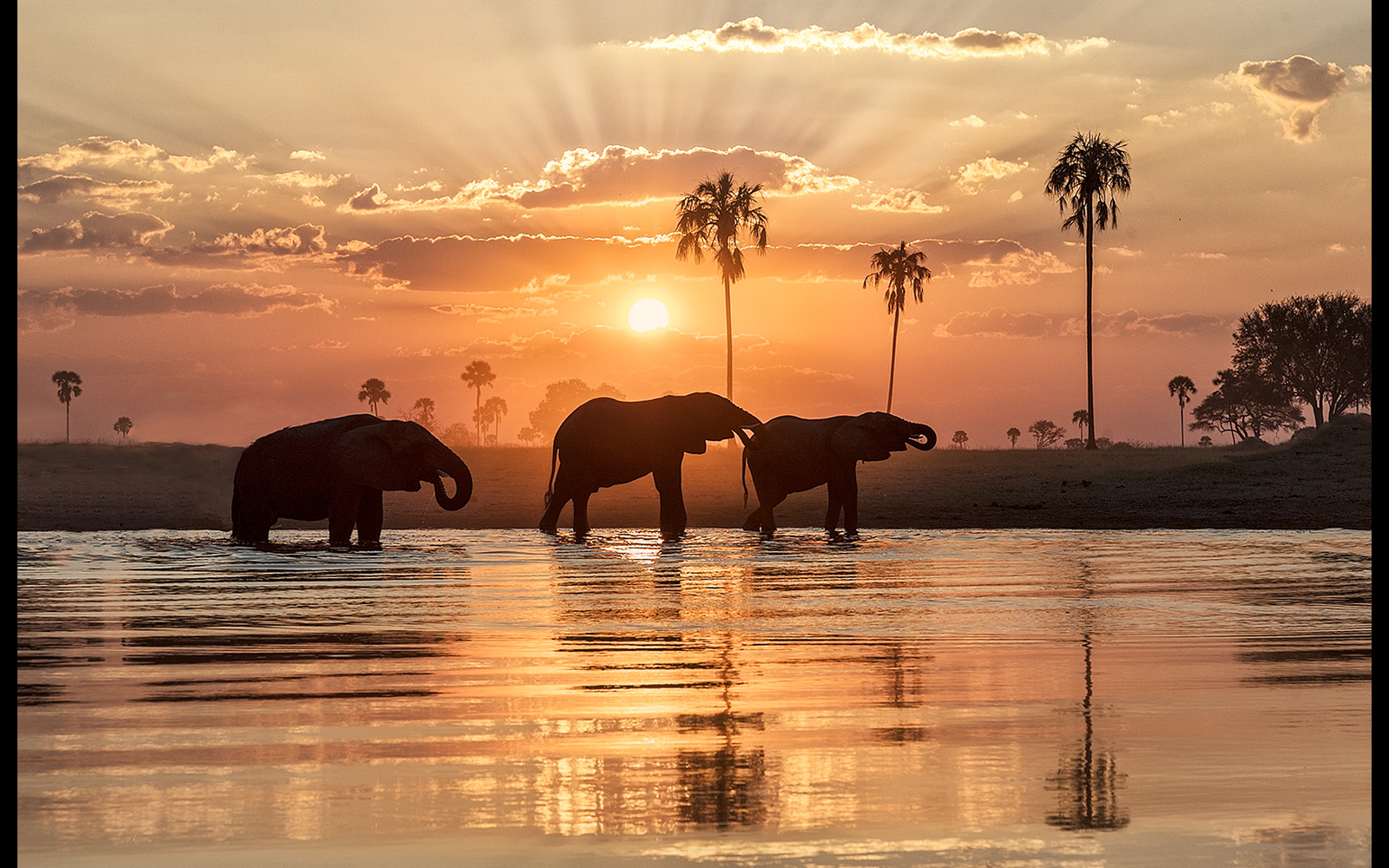 Hwange National Park is home to one of the largest elephant populations in Africa. An estimated 44,000 pachyderms are inhabiting the 14,651 km² park, making up 90 % of the above-surface biomass. The park is lacking in natural surface water so during the dry season the animals, including the elephants, rely on human-made pans of calcium-rich water pumped from boreholes.