Brin, a two-year-old Malinois, is the first dog to do this work in South Africa and has already become a vital part of the CapeNature team. Brin was trained for tortoise detection over a six-month period by CapeNature Ecological Co-ordinator, Vicki Hudson. 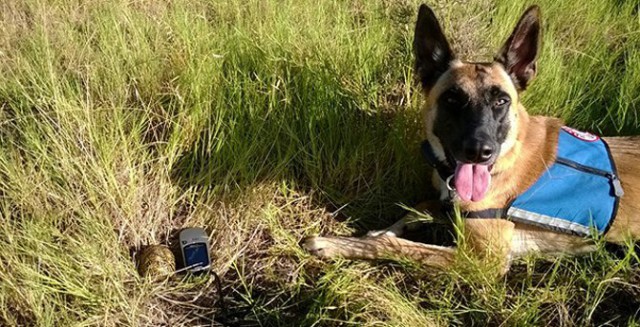 “The Malinois is a working breed which is part of one of the four varieties of Belgian Shepherds. They are recognised internationally as excellent working dogs and their short brown coat is very suitable to working in shrubby thorny veld,” says Hudson. “Brin loves her ball more than anything else in the world even food! This is her reward for sniffing out tortoises and she is happy to do this over and over again at any time or place.”

Following a devastating fire in the Elandsberg Nature Reserve in 2012 and focussed attention to update the distribution of the geometric tortoise, CapeNature initiated a pilot project to investigate the use of conservation detection dogs to assist with geometric tortoise surveys. Brin and Vicki Hudson are the dog handler team that is currently conducting field work in the Western Cape.

The detection team became fully operational in September 2013 and since then the team has successfully carried out a variety of work across the province, including presence/absence surveys, species diversity surveys, total population estimates and search and rescues.

“A suitable conservation detection dog is not breed specific, but needs high play and hunt drives, along with physical suitability to working in the South African veld and climate. These dogs have a very high energy level making them unsuitable as pets,” says Hudson. 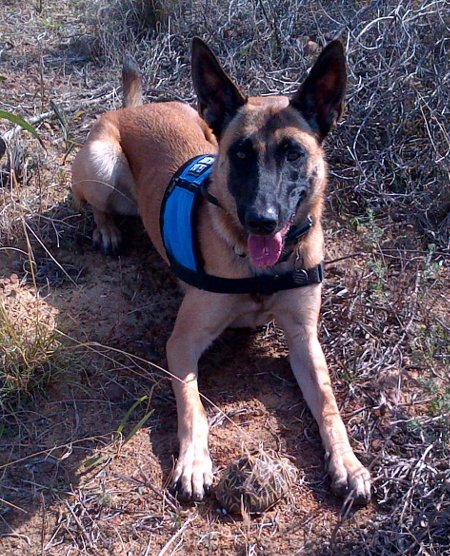 In the USA, the use of conservation detection dogs has been demonstrated to be safe, effective and cost efficient when searching for the threatened Mojave Desert tortoise. Dogs were investigated for use as an alternative survey tool to humans who are limited to visual cues for finding tortoises. The non-profit organisation, Working Dogs for Conservation, has advised, guided and continues to work closely with CapeNature.

Various partners assisting the organisation with funding to implement the conservation action plan of the geometric tortoise, of which this conservation detection projects forms a part of, include The Turtle Conservancy, Masuda Wine Merchants Japan through the Slowine initiative managed by Villiersdorp Cellars, Working Dogs for Conservation and WWF – Table Mountain Fund. 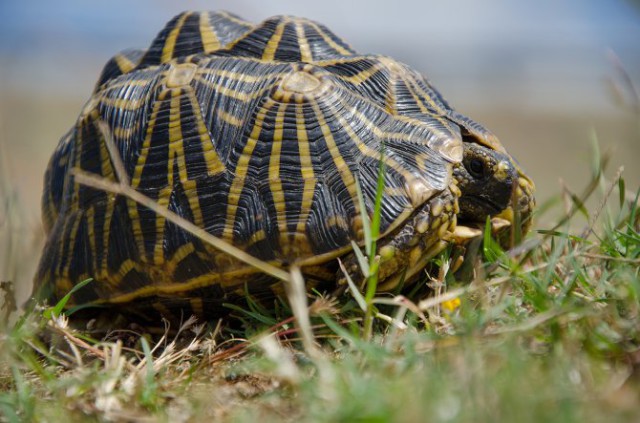 The geometric tortoise is South Africa’s most endangered terrestrial tortoise and one of the world’s top 25 most endangered tortoise and freshwater turtle species. The conservation status of this species was recently been upgraded to critically endangered according to IUCN criteria. It is now the third most endangered land tortoise in the world, and has been listed by the IUCN as one of the top 100 most threatened species on Earth. This species only occurs in the low lying renosterveld habitat of the Cape lowlands and the main threats to this species include habitat destruction and fragmentation, too frequent fires, alien vegetation encroachment and a probable increase in predation pressure.

In order to monitor and conserve this species, conservationists must have vital information about the size of the population and its presence or absence in suitable habitat. Getting this type of information requires many, many man hours and this is a limiting factor when gathering data about this species. The cryptic colouration and sedentary behaviour of this tortoise causes problems when conducting counts. They are incredibly difficult to spot from a visual perspective.