A plane full of hyenas 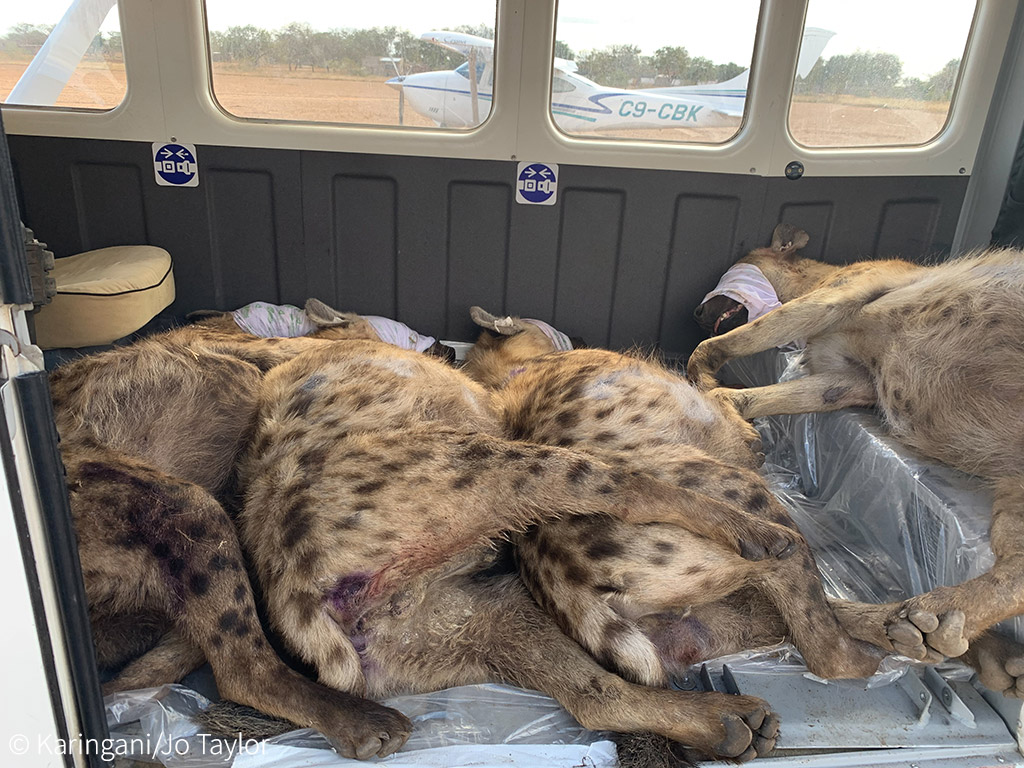 Four young spotted hyenas have completed a journey of more than 1 400 km to Zinave National Park in Mozambique, where Peace Parks Foundation will introduce them as the founder population of the first resident large carnivores in decades. The hyenas were captured in Sabie Game Park and moved to a temporary boma in Karingani, and then later airlifted to Zinave. This remarkable journey is the result of a partnership centred around dedicated conservation efforts in Mozambique.

Over the last five years, Zinave National Park, which lies in the Mozambique component of the Great Limpopo Transfrontier Conservation Area, has seen the reintroduction of more than 2 000 plains game, giraffe, elephant, buffalo, warthog and even ostrich. A total of 13 species have been translocated here, each with a unique ecological role to play in restoring balance to this landscape. 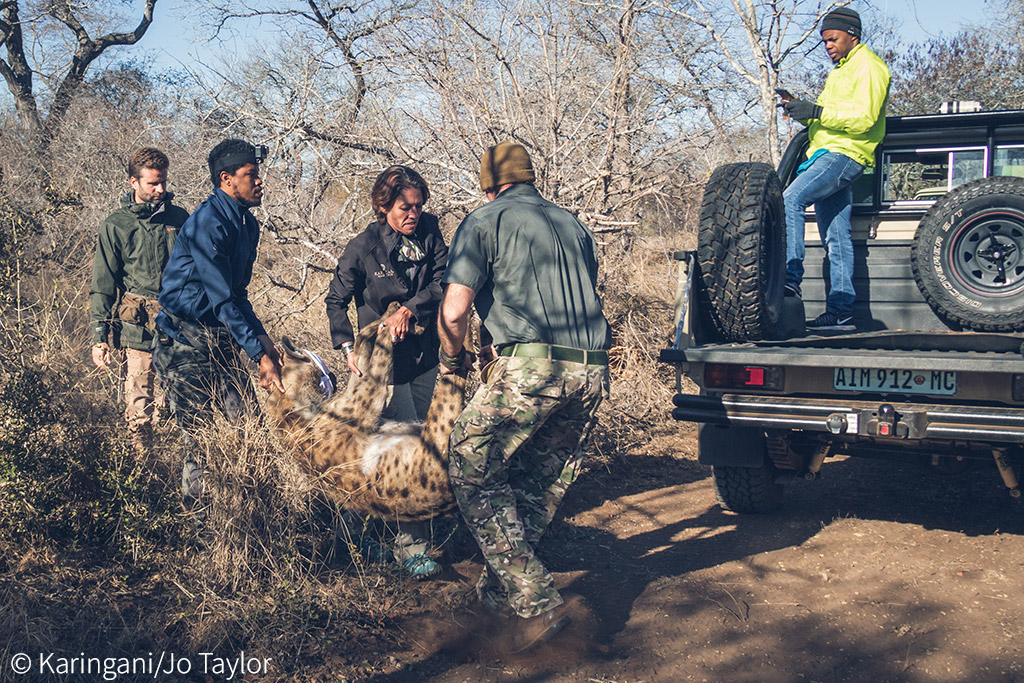 “Zinave’s herbivore population is growing extremely well,” says Bernard van Lente, who works as Peace Parks Foundation’s Project Manager in Zinave, “so much so, that we have decided that it is now time to reintroduce predators such as hyenas into the system. Animals die of natural causes, which is completely normal and part of nature’s cycle, but because there are no large predators and very few scavengers in Zinave’s sanctuary where most of the wildlife was introduced, the carcasses are not being properly recycled.”

Peace Parks Foundation, who, through a 20-year partnership agreement signed in 2015 co-manages Zinave with Mozambique’s National Administration for Conservation Areas (ANAC), requested the assistance of the Endangered Wildlife Trust (EWT) to undertake a feasibility study on the introduction of predators into the park. 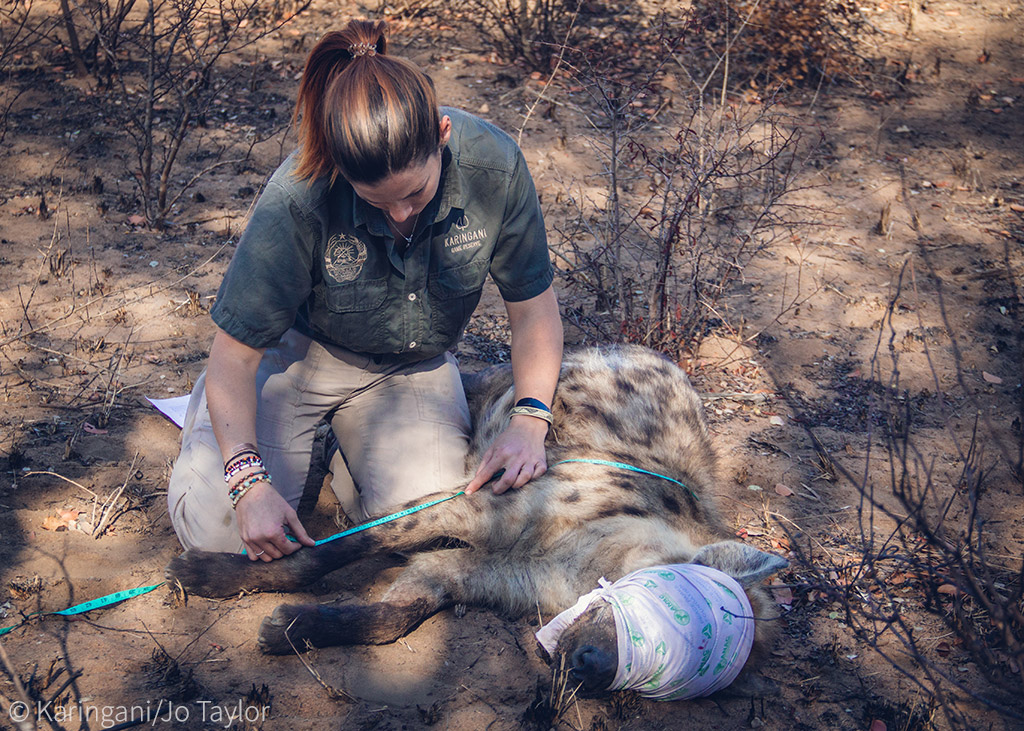 The EWT team first visited Zinave’s sanctuary in November 2019 to assess various possibilities. Dr David Mills, head of EWT’s Carnivore Conservation Programme, says, “because we found that there were almost no carnivores in Zinave, we suggested that rather than reintroducing only one species, there would be much more conservation value in reconstructing the lost carnivore guild which will eventually revive important ecological functions and processes.”

Following a presentation of this study to ANAC, approval was granted to reintroduce those apex predators that exploit related natural resources, such as hyenas, leopards and lions to Zinave National Park, setting in motion this remarkable hyena translocation operation. 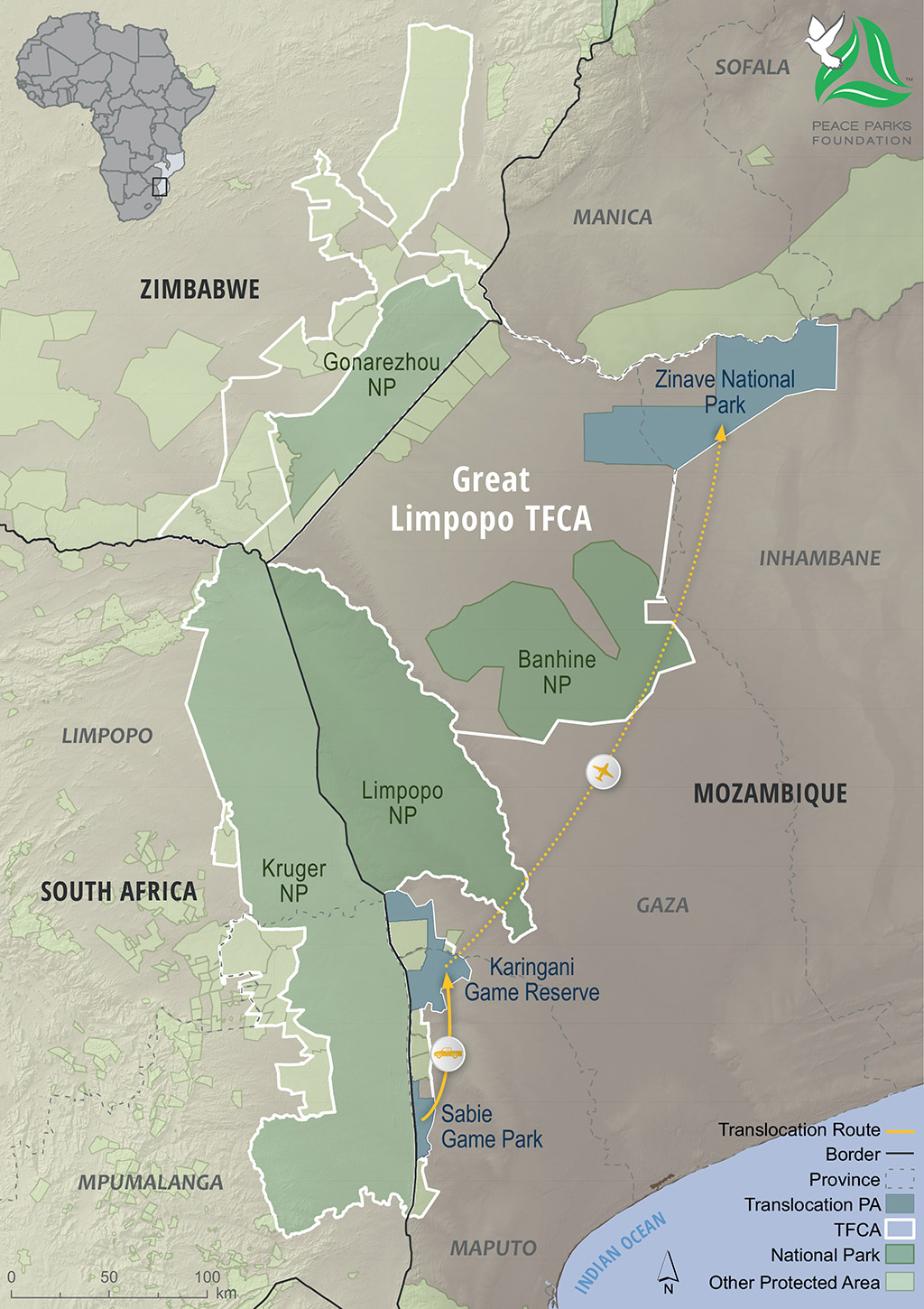 The ecological impact of spotted hyena entering Zinave’s system will be significant as the species is both a predator that will take off weaker animals from herds (which will keep the gene pool strong), as well as a scavenger that will remove carcasses, ensuring systems remain disease-free. Another significant advantage is that they will most likely attract smaller scavengers. David says, “there is evidence from elsewhere in Africa that vultures need hyenas to open carcasses since most are not strong enough to do so themselves. We learned that only a few jackals were occasionally seen, and no vultures were present in the sanctuary. We, therefore, decided that it was critical to kick-start the scavenging process by introducing spotted hyenas first as they will both hunt and feed on existing carcasses.”

Sabie Game Park, which is one of Mozambique’s flagship private reserves, did not falter in again stepping up to support rewilding of the country’s national conservation areas. During 2019, Sabie donated 99 buffaloes to Maputo Special Reserve, which is also being developed through a partnership between Peace Parks and ANAC. Sabie CEO, Sandy McDonald, says, “we are in the privileged position to be able to offer hyena for a relocation due to our successful conservation programme.”

In mid-April 2020, Saving the Survivors, a wildlife veterinary organisation that serves as ANAC’s official veterinary resource in Mozambique, commenced with the identification of a hyena clan in Sabie to start preparations for the translocation operation. Working with the Sabie team, the selected clan was slowly baited over time to habituate the animals to vehicles. “Saving the Survivors has lent its entire weight to this project, not only its Mozambique operation but also the back-office functions in South Africa and the UK. We are supplying two wildlife veterinarians, Dr Joao Almeida and Dr Hugo Pereira, as well as all the medical equipment, treatments and drugs required to safely complete the capture, translocation and ongoing care of the animals following their release in Zinave,” says Tristan Wood, Saving the Survivors Director.

In early July, despite delays due to COVID-19 restrictions, two males and two females were successfully darted and transported to Karingani. “As part of Karingani’s larger restoration plan, we already had appropriate predator bomas (holding facilities) that were made available for the hyena while they underwent veterinary tests,” says Karingani Warden, Ellery Worth. His team kept a close eye on the animals to ensure they remained healthy and kept feeding after the capture operation. “Landscape restoration and collaboration are at the core of our ethos – what better example of that than to be a part of the restoration of Zinave National Park in partnership with like-minded public and private conservation organisations.”

After receiving the all-clear from the veterinarian team, the clan spent about a week enjoying Karingani’s hospitality before embarking on the final leg of their journey, by small airplane no less, to Zinave. Upon arrival, the animals were released into an electrified boma where they will stay for approximately six weeks before being given access to the bigger sanctuary. Large predators have a fantastic homing instinct that allows them to return to their capture location from hundreds of kilometres away. To help them establish Zinave as their new home, Bernard says, “during this period, we will ensure that the four are well-fed and watered, basically catering for all their needs which will help hone their homing instincts to Zinave and ensure they remain within the sanctuary.”

Two of the animals were also collared to enable Zinave’s team to keep track of the clan’s movement. Robust anti-poaching efforts are ongoing to ensure that the area remains safe.

A sentiment shared by all partners was the fact that being part of this conservation effort is a privilege. “I think the emphasis on collaboration is key to successful and holistic conservation – multiple stakeholders all driven by the same desired outcome of safeguarding the planet’s heritage, is a significant aspect of this and future projects,” concludes Ellery.