A day after the Zimbabwe Conservation Task Force announced its intention to bring a high court application against the country’s wildlife authority for selling baby elephants to zoos in China, its chairman and animal rights campaigner, Johnny Rodrigues, declared a huge a victory to animal welfare activists around the globe.

Conservationists, international supporters and members of the organization flashed victory signs on Friday when they learned the Zimbabwe Parks Wildlife Management Authority had caved in to massive international pressure and released five “kidnapped” baby elephants from captivity at Hwange National Park. Meanwhile an orphan at the same bomas is believed to have died before it too could be re-located.

“We believe that 11th hour closed-door negotiations between the ZPWMA and the Zimbabwe NSPCA resulted in this upshot; The whole thing has been hushed up because there is so much money involved” Rodrigues said.

On Friday evening the elephants were loaded onto a large truck with a support vehicle and transported through the night to Umfurudzi National Park, a 76 000 ha reserve where they will be released into a carefully planned rehabilitation programme.

Hamish Rudland, board member of the Umfurudzi National Park told Independent News he had been contacted by Zimbabwe’s wildlife authority to oversee their rehabilitation programme.

“They will be released into a series of expanding bomas for about three months to settle down until they have adapted to their new surrounds. It will then be suitable to introduce them to other elephants for gradual integration. Within a year they will be living in a fenced area between 3000 and 5000 hectares” he said.

The victory though is bitter sweet for Rodrigues and his supporters, who have called for the return of three young elephants from China they say “were stolen from Africa”.
“These are African animals. They are our wildlife and should remain in Africa, not be sent to some hell-hole circus zoo facilities in sub-zero temperatures in China” he said.

It is the second time in two years Rodrigues has successfully led a united public campaign against the Zimbabwe government’s unethical attempts to sell wildlife in return for foreign exchange.

In 2010, the government was forced to call off a wildlife sale that would have sent two wild-caught, eighteen-month-old baby elephants, giraffes, zebras, hyenas, monkeys and birds, to a zoo in North Korea.

International conservationist Dr Ian Player, who in the 60’s and 70’s successfully re-located white rhinoceros to world-class safari parks and zoos across America, supported Rodrigues’ call to have the elephants returned to Zimbabwe.

“The sale of animals to destinations where it is known the animals will not be properly cared for, and facilities that are inadequate, is absolutely and morally wrong. No African government should allow it” he said.

The five young pachyderms had been held in bomas for three months at Hwange National Park, Zimbabwe as part of a second wave delivery to fulfill orders from zoos and safari parks in China. Rodrigues said he suspects a fraudulent and shady deal between inter-government officials, brokered by a corrupt Chinese syndicate member.

The saga has also raised charges of unethical conduct and a breach of animal welfare standards leveled at the Zimbabwe government and CITES, the watchdog body that oversees the international trade in wildlife and endangered species

Chinese authorities have still not offered any explanation for the cause of death and have left its lonely companion under stress behind bars in a cold and damp cement cell.
Experts believe the first four animals were too young to make the long journey alone, and were unlikely to have been weaned from their mothers when they were captured at Hwange.

Emirates Airlines and IATA (International Air Transport Association) have also under fire from animal welfare NGO’s for their roles in transporting the pachyderms to lives of captivity, despair and depravity in China.

A source close to the saga said the animals were left alone in the hold unattended during the 12 hour passenger jet flight from Harare to Dubai.

On Friday Rodrigues warned the battle was far from over.

“We believe a fraud has been committed, and we are calling for the CITES permits to be made public documents and open to scrutiny. If we can prove that, then CITES must be held accountable. They should send a team of investigators to Zimbabwe immediately,” he added.

He told Independent News he has information there are more captive facilities in Zimbabwe that he suspects are also holding animals destined for shipment to these horror zoos.

“We believe there are currently orders for about 50 or more elephants to go overseas. This is out of control and we are investigating”.

ZPWMA Public Relations Manager, Caroline Washa Moyo, confirmed an agreement had been reached Friday, but denied the authority had buckled to international pressure. However, she conceded that the secretariat at the Convention on Trade in Endangered Species (CITES) had asked the wildlife authority for a report on the facts surrounding the capture and sale of the elephants to China.

“They had been in the bomas too long and we reached a decision to rehabilitate the elephants.

“We assessed the situation on the ground, and the result is that we decided the elephants had grown too big and used to human beings. Hence we felt we needed to release them in order for them to be rehabilitated,” she said.

Most zoos and safari parks in China offer animal entertainment shows that vary from the bizarre to the inhumane. Elephants have even been trained to stand on their heads, a practice deemed cruel and barbaric. 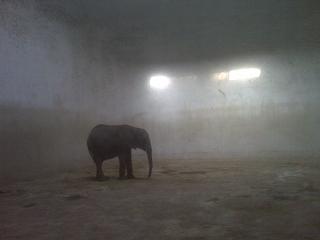 “Asian elephants are threatened and endangered Appendix 1 species. China has no indigenous elephants so they see it as African elephants being easier to train than trying to import Asian species,” a wildlife expert said his week.

A global AVAAZ petition was launched early January calling on CITES to revoke any further permits for the export of wild captured baby elephants to China.

Over 15 000 people signed the document, which was recorded by the Cites secretariat in Geneva, Switzerland.

In the face of the global outcry, the secretariat issued a statement.

“Both Zimbabwe and China are longstanding parties to Cites.
“All permits and certificates for trade under Cites are issued and accepted by the designated national Cites authorities of the 177 state parties (countries) to Cites. The Cites secretariat does not issue any Cites permits or certificates, and has no authority to directly intervene in Cites trade transactions.”

To remain in compliance with the Convention, Zimbabwe’s CITES Management Authority would have to have approved the issuing of permits allowing the elephants to leave the country.

Both China and Zimbabwe are signatories to CITES, and as such must abide by the trade regulations set out to the parties.

While trade in Zimbabwe’s African elephant population listed under Appendix 11 is legal, an annotation to the Appendix II listing specifically provides for “trade in live animals to appropriate and acceptable destinations”.

Warnings from Zimbabwe’s own wildlife authorities that the facilities in China were not appropriate were allegedly ignored at a senior level.

“The government sent a vet China to inspect the facilities. They should have sent an ecologist who understands habitat requirements and elephant behavior,” Rodrigues said.

“If the Zimbabwe CITES representative signed off on the permits with the knowledge that the facilities in China were neither acceptable nor appropriate, then Zimbawe would have been in breach of the convention,” he added.

Environmental lawyer and Chairman of Space for Elephants Peter Rutsch said by legalising and allowing the transfer of these elephants under the circumstances they were captured and shipped, undermines the entire purpose of CITES.

“On the face of it, if they have no authority to intervene, then they are like a toothless tiger. It’s certainly time for CITES to re-examine its role in the protection of wildlife,” he said.

Independent News obtained exclusive updated photographs of the surviving infant Friday from Animals Asia which has been monitoring its welfare at the zoo.

The NGO’s Hong Kong based Welfare Director, Dave Neale called on the public to show the authorities that the world will not tolerate such gross exploitation of wild animals.

“In Chinese zoos, enclosures are limited in size and lack necessary behavioral and mental opportunities.

“Unhealthy body weight due to poor diet and lack of exercise, inadequate flooring, unhygienic conditions, boredom, chronic stress, and abuse from the public and occasionally from animal keepers, make these destinations inappropriate. Often inhumane methods are used to ‘train’ elephants for public performances,” he said.

Human-wildlife conflict: The ones that got away from snares and shotguns Read more
Share this ArticleLike this article? Email it to a friend!
Email sent!