As the sun went down over the southernmost extension of the Great African Rift Valley, Harvard University entomologist and renowned wildlife photographer Piotr Naskrecki began hiking up Mozambique’s Mount Gorongosa.

Lured by the chorus of katydids, Naskrecki left the group of biologists he had traveled to Africa with behind and followed the sounds of the cryptic insects into the unknown alone. With his headlamp on and three days worth of supplies stuffed into his backpack, he began his search for the small insects in the forest ahead. But what he found was not what he set out to see…

At the edge of the rainforest near the top of the 6,112-foot mountain, Naskrecki spotted an animal whose shape seemed both unexpected and oddly familiar. Recalling the event Naskrecki said, “it took my brain a second to pull together disparate threads of superficial knowledge and then… Sweet Merciful Jeebus, this is the Gorongosa pygmy chameleon!” 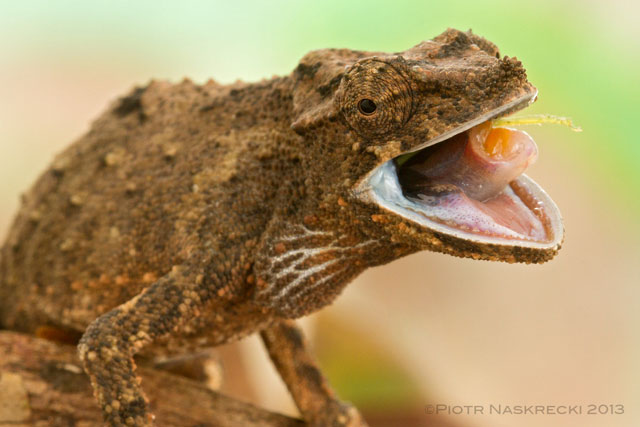 Unlike their larger relatives (Chamaeleoninae), which have prehensile tails and live high on trees and bushes, Gorongosa pygmy chameleons lack a prehensile tail and spend most of their lives closer to the ground in the leaf litter. Naskrecki explained that it is only at night that these small lizards climb up branches, like the one he first saw, to avoid being eaten by shrews and other nocturnal predators found in the area.

“Since few night predators are equipped with good color vision, at night they [Gorongosa pygmy chameleons] shrink their color-producing chromatophores in their skin, and turn ghostly pale,” Naskrecki stated. “This of course makes them easy to spot by somebody carrying a powerful flashlight, and soon I started noticing dozens of them sleeping on trees and bushes all around me.”

Under the new moon, Naskrecki headed back to his tent after his rare sighting dreaming of the upcoming day, which he planned to spend photographing the tiny lizards. However, when Naskrecki woke with the sun the next morning, the pygmy chameleons were nowhere to be found.

Abandoning the katydids that he originally set out to find, Naskrecki spent the entire day searching for the lizards whose small size and ability to alter their body color and pattern to match the forest floor make them difficult, if not impossible, to find. But his search was in vain.

It wasn’t until the sun sank below the horizon that Naskrecki saw the tiny lizards again. With the darkness of night the pygmy chameleons turned ghostly white and appeared on the branches, making them easy to see as he scanned the forest vegetation with his headlamp; however, the lack of light prevented him from photographing the tiny creatures.

Determined to document a day in the life of the Gorongosa pygmy chameleon, Naskrecki woke up before the sun the following day, emerging from his tent just in time to spot one last chameleon slowly climbing down the branch it had been hugging the night before.

As the tiny lizard skillfully descended to the forest floor, Naskrecki noticed a newly hatched baby nearby. Focused on the larger female, he didn’t notice as the baby made its way over to the larger female and climbed on top of her to hitch a ride. Though, once it happened, he did capture the endearing and rare scene in incredible images. 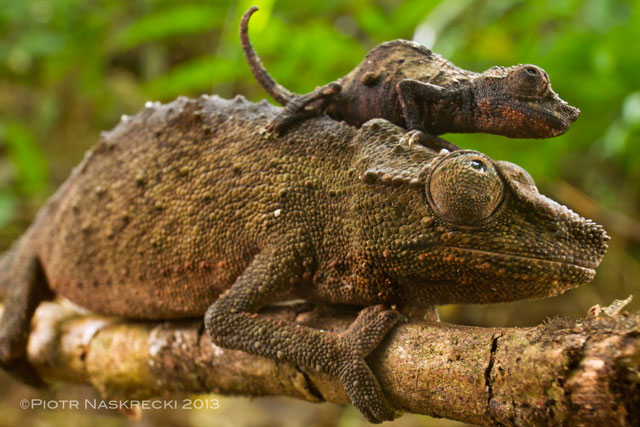 As the day passed, Naskrecki followed the little lizards’ tiny steps, photographing them as they slowly climbed over dead leaves and skillfully caught grasshoppers, termites and other small insects with their incredibly long tongues. 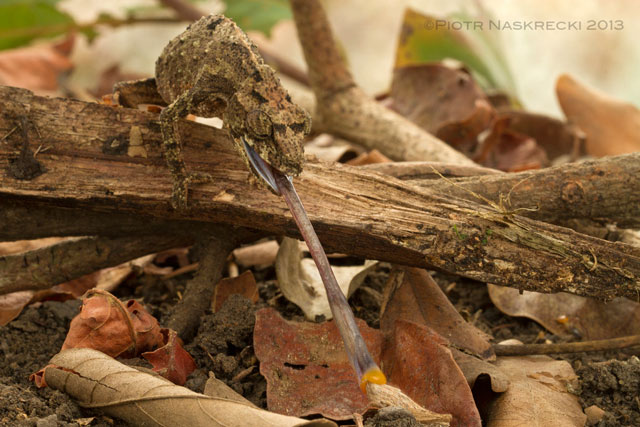 “During the few nights that I spent on the mountain, in those moments when I wasn’t giggling with delight at the sight of the most adorable lizard on the planet, I found several katydid species new to science,” Naskrecki said after returning from his solo expedition into the largely unknown jungle atop Mount Gorongosa.

Talking to Naskrecki back at Harvard, it is obvious that while he traveled to Gorongosa National Park to help survey the biodiversity of the area, which is still largely unknown and just beginning to be studied, he left with much more than a list of animals he had seen and a handful of new species to describe. He got to witness the unique and mysterious creatures that call Gorongosa National Park home and through his photography and research he is dedicated to sharing these tiny wonders with the rest of the world. 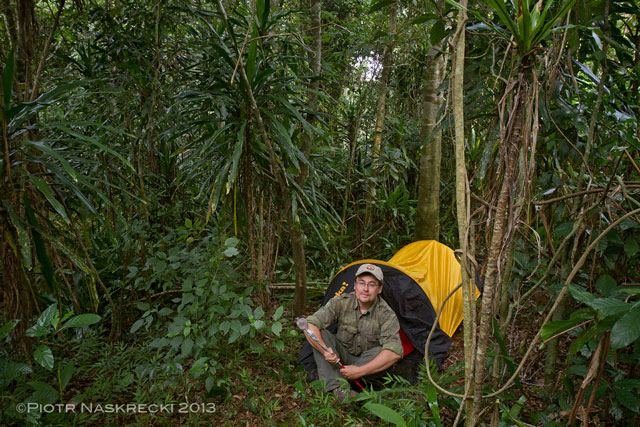 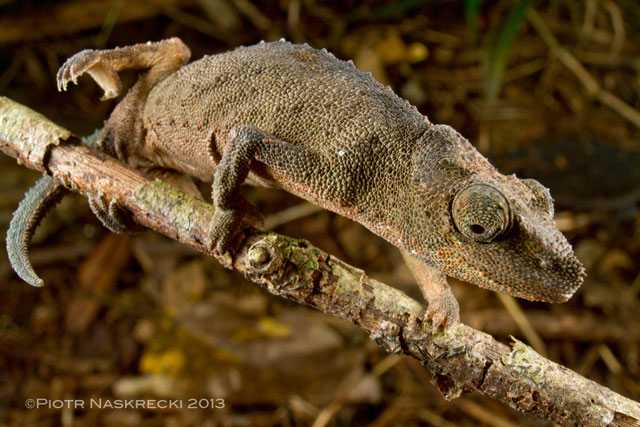 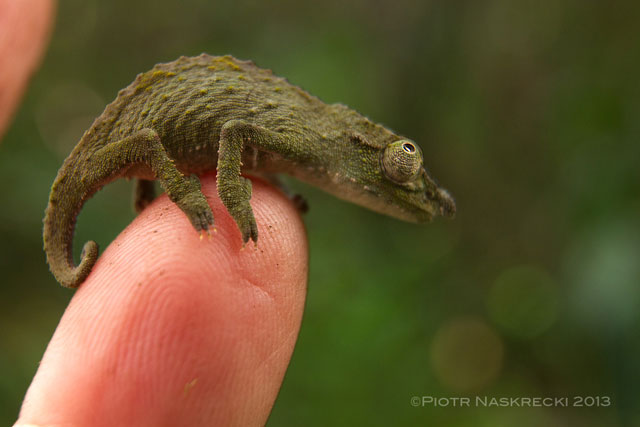 To find out more about Piotr Naskrecki visit his blog The Smaller Majority.

Gorongosa National Park, in Mozambique, is perhaps Africa’s greatest wildlife restoration story: a 20-year public-private partnership between the government of Mozambique and the Gorongosa Restoration Project, a U.S. non-profit organization. To learn more about the Park, its history, the animals that call it home, ongoing research in the area and how you can plan your Goronogosa adventure visit the Park’s website: http://www.gorongosa.org/our-story