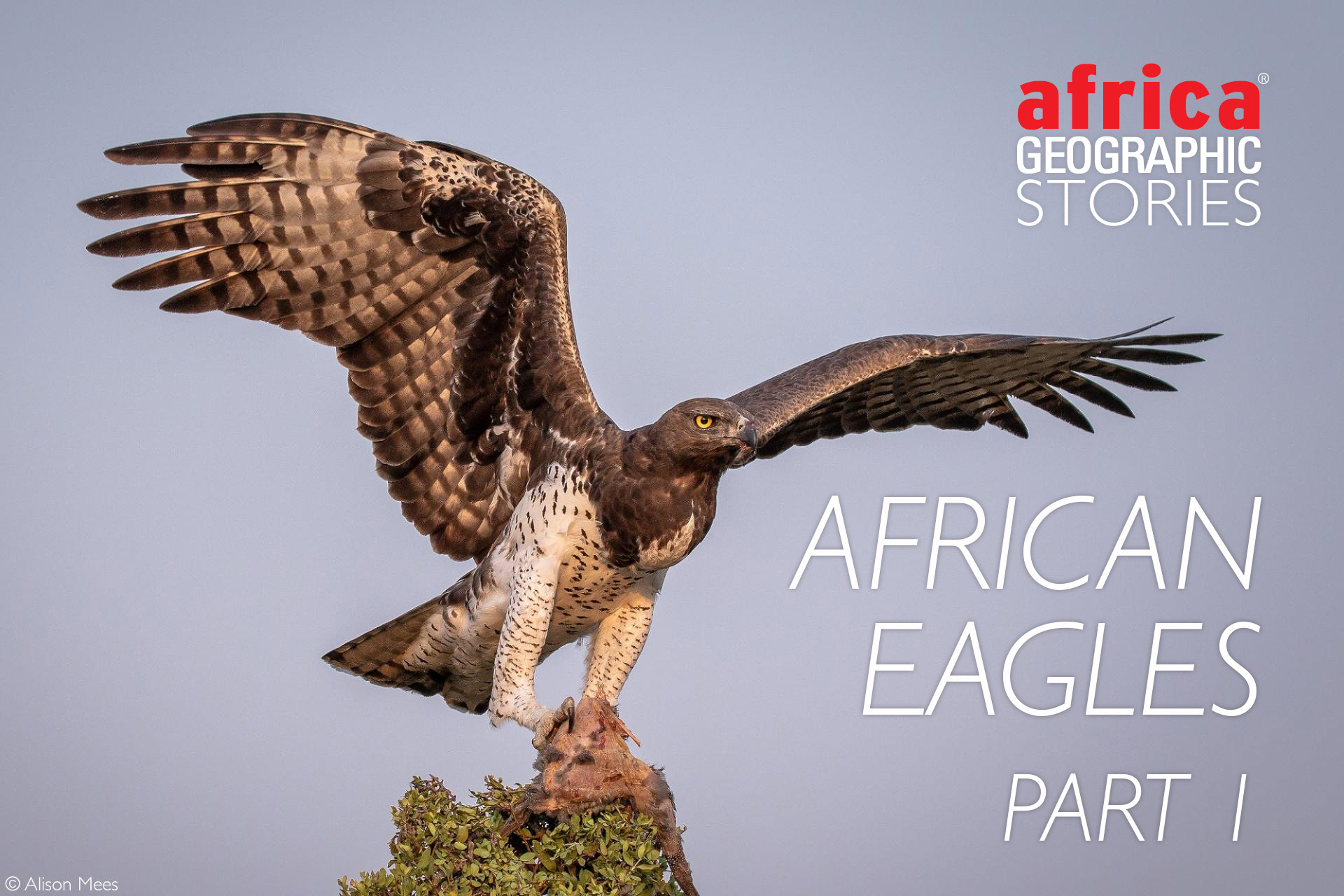 Africa’s iconic terrestrial predators – the three big cats, the African painted wolf, and the spotted hyena – are all wondrously proficient predators that fit neatly into place in their ecosystems. Tourists flock in their droves to admire the unique hunting styles that include coordinated killing, stealth and ambush, high-speed chases and remarkable displays of stamina. In the skies above these dramatic scenes, the avian apex predators soar. Sharp-eyed and fierce, African eagles bring unexpected death from above.

Birds of Prey – The Accipitridae

When distinguishing between African eagles and other birds of prey, most guides (and likely most safari guests) are taught that the “true eagles” have feathers that extend to the foot. While this would certainly simplify matters, the exact definition of what constitutes an eagle is simultaneously broad and somewhat vague. It is a definition usually based on size and a rough description of “power”. Fish eagles, bateleurs, and snake-eagles lack the feathered legs of “booted” eagles, but ornithologists still consider them eagles.

The term ‘eagle’ encompasses several different genera of large birds, some of which are not particularly closely related but all of which belong to the Accipitridae family. This is an enormous family with over 230 species of raptor, including eagles, kites, hawks, buzzards and Old-World vultures. At present, eagles can be informally divided into four subfamily groups:

With ever-improving genetic technology, our understanding of phylogenetic relationships between species is changing. Many eagles will likely be shifted to a new genus or grouping as research continues. In Africa, they range in size from the relatively small snake eagles to the stocky martial eagle, the fifth heaviest eagle in the world.

Whatever the definition used, most people associate African eagles with hunting proficiency and strength – a well-earned reputation. These sleek masters of the skies are efficient and intimidating predators that use a combination of skill, speed, and power to survive.

The description of “two eyes with wings” was coined by Rochon-Duvigneaud about the pigeon but is no less applicable to eagles. They are sight-hunters, capable of spotting potential prey from several kilometres away. Most bird species have exceptional visual acuity, but eagles are probably at the top of the list. The reason behind this is two-fold: the physical structures of the eye and the brain’s ability to process visual information. These physiological adaptations confer eyesight that experts estimate to be between four to eight times sharper than humans.

Like other raptor species, the eyes of eagles are approximately 1.4 times larger than birds of equivalent size and weight. The eyes are so large that there is little room for muscles to move the eyeball, which is the case in most birds. In addition, a sclerotic ring of bone holds the eagle’s eye in place, and thus eagles need to turn their heads to view anything outside the peripheral range.

Though the eyes are forward-facing, eagles can use both monocular and binocular vision, meaning that they can see straight ahead and to the side simultaneously. This is made possible by two foveae (humans only have one) in each eye – focal points consisting of clusters of specialised cells known as photoreceptors. On average, the retina of an eagle has roughly twelve times the number of cone cells as a human – photoreceptors that are associated with clear colour vision at high resolutions. They are also able to see ultraviolet light, which helps them detect urine trails on the ground.

Muscles in the eye itself can contract rapidly to change the shape of the lens, allowing the bird to focus on prey while diving. Their brains are able to resolve moving stimuli far faster than mammals, and they process that information exceptionally quickly.  This is how birds of prey can navigate a forest hunt at speeds that would simply be a blur to the average human.

A bony projection above the eye, known as the supraorbital ridge, is responsible for the typical raptorial scowl. Absent in owls, this ridge is believed to provide support and protection to the eye socket, as well as shading the eye while the eagle is in flight. The spin-off is that eagles give the distinct impression that they are deeply annoyed by everything and everyone in their vicinity.

Eagles generally use razor-sharp talons backed by the considerable momentum of their bulk to dispatch prey. Hurtling out of the sky at speeds of over 100km/h, they collide with their unsuspecting quarry, often breaking the neck and spinal column instantly or penetrating the skull with a curved talon. The four-toed feet of eagles are specifically designed for this purpose, powered by strong muscles and covered in a thick, protective coating of scaly skin. The talon is solid bone, the distal phalanx (final joints) of the foot enclosed by the protective layer of keratin similar to fingernails.

Three talons are forward-facing, while the fourth points backwards and secures a solid grip on struggling prey. This hallux claw is the first digit and is sometimes referred to as the “kill claw” because it may be used to spear prey or grip tightly enough to cause asphyxiation. Naturally, there are variations in its size depending on the habitat and hunting style of the African eagle species concerned. For example, crowned eagles (Stephanoaetus coronatus) are believed to have the largest hallux claw of any eagle. This may relate to the restrictions of the forest habitats they prefer. There are also anecdotal accounts of a martial eagle breaking a man’s arm with its talons. (This account is chronicled in old hunting records and, as such, should probably be treated with the same scepticism given to fishermen recounting catch size.)

The talons of eagles will be used during territorial battles, where two opposing eagles clasp their talons together and cartwheel through the sky, pulling out of the freefall at the last moment. This cartwheeling display was once believed to be courtship behaviour, but recent research suggests it is more likely related to competition.

Like most birds of prey, African eagles exhibit considerable sexual dimorphism, which is relatively standard in the avian world. However, unusually in the animal kingdom, the females are heavier and stronger than their male counterparts. No one is entirely certain as to why exactly. Still, several theories have inspired what one scientific paper refers to as a “passionate debate” that goes back centuries.

Explanations include reduced food competition between the sexes (seldom born out by research and failing to explain why the male is not bigger) and the female being able to protect her nestlings from the male’s predatory instincts. More recent theories lean more towards the fact that the female does most of the active guarding of the nest and young. As such, a heavier, stronger female has been evolutionarily selected. However, no one theory has received universal acceptance, and every approach has exceptions.

African eagles are monogamous, and most species are known to form lasting pair bonds, where the males share much of the parental load. Even migratory species will reunite after a long journey to breed, though a missing or delayed mate will be summarily replaced. Mating pairs build the messy nest of twigs, formally referred to as an eyrie, and regularly reuse the same nest site (known as strong “nest site fidelity”). While the female incubates the eggs and guards the nestlings, the males will see that they are kept well-fed.

African eagles hunt and feed on a wide variety of prey. Naturally, the size and the exact breakdown of prey are extremely species-dependent, but almost all eagles can tackle animals heavier than themselves. For example, Africa’s three prodigious eagle species – the martial, Verreaux’s and the crowned – have been observed catching and killing adult antelope. Certain eagle species maintain a specialist diet (such as fish eagles), while others have adopted a much broader palate.

Fascinatingly, the Taung Child, a young Australopithecus africanus whose remains were discovered in South Africa, is believed to have been killed by an eagle. According to Professor Lee Burger, the damage to the skull’s eye sockets matches that of monkey specimens collected from crowned eagle nests. The crowned eagle shows a particular preference for primates, and there have been a couple of isolated incidents in modern times where crowned eagles have killed or injured small children. However, this is highly unusual behaviour, and an eagle is far more likely to target a small dog or cat.

Unfortunately for African eagles, humans present a far more significant threat to their survival than they do to ours. In recent decades, most eagle populations have suffered at our hands in one way or another. The dramatic fall in vulture numbers has been relatively well-documented in recent years, but conservationists are also raising the alarm for many other birds of prey, including eagles. The distressing decline has been particularly pronounced in West Africa but is widespread throughout the continent and has affected most of the larger raptors. The reasons behind this drop are likely diverse and can be linked to habitat loss, power lines and poisoning. Large eagles, particularly martial eagles, are also targeted by farmers who blame them for killing their livestock. As a result, a 2020 Red List update saw the bateleur, martial eagle, and secretary bird raised to the higher threat level of ‘Endangered’.

Persecution at human hands is exacerbated by the fact that the larger, territorial eagle species naturally occur at low densities. Their reproduction rates are slow, and a breeding pair may only raise one chick every two years.  It will then take a young eagle between six and eight years to reach sexual maturity. This makes it extremely difficult for African eagle populations to bounce back once their numbers begin to fall.

It is little wonder that African eagles are associated with powerful symbolism in religion, mythology and even heraldry. They are silent and deadly killers, devoted parents, and fierce combatants.