Posted on September 27, 2017 by News Desk in the News Desk post series.

A large bull elephant was shot and killed in Zambia this past weekend by a trophy hunter. The term ‘iconic Tusker’ was used to describe the elephant and celebrate the hunt, but it is not clear if this was indeed a true ‘Tusker’ (with tusks weighing 100 pounds on each side). It is estimated that there are fewer than 50 true Tuskers left in Africa, and probably only 25-30.

The hunt was reportedly legally organised through Stone Hunting Safaris, where hunting in Zambia takes place in “the Luangwa Valley, Kafue Flats, and Bangweulu Swamps in governmental conservation areas or large privately owned ranches, depending on the required species”.

Game Animals of the Past and Present posted their congratulations to the hunter on their Facebook page, saying:

“Biggest elephant shot in Zambia in decades, iconic Tusker. Well done great trophy 🏆 👍🏻and yes all meat was utilized donated to local villages and schools. Lot of money was payed [sic] for the license to shoot the bull and that money goes towards conservation of not only next elephant generations but the whole ecosystem there benefits from legal controlled hunting.”

Game Animals of the Past and Present explained, in reply to numerous comments, that all parts of the elephant were used. The hunter receives the skin and tusks, and the meat is donated to local villages and schools. In addition, the money paid by the hunter goes towards conservation practices in the region. 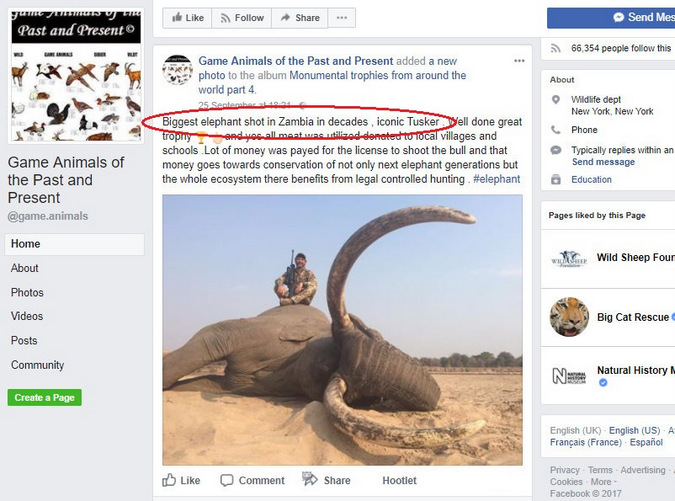