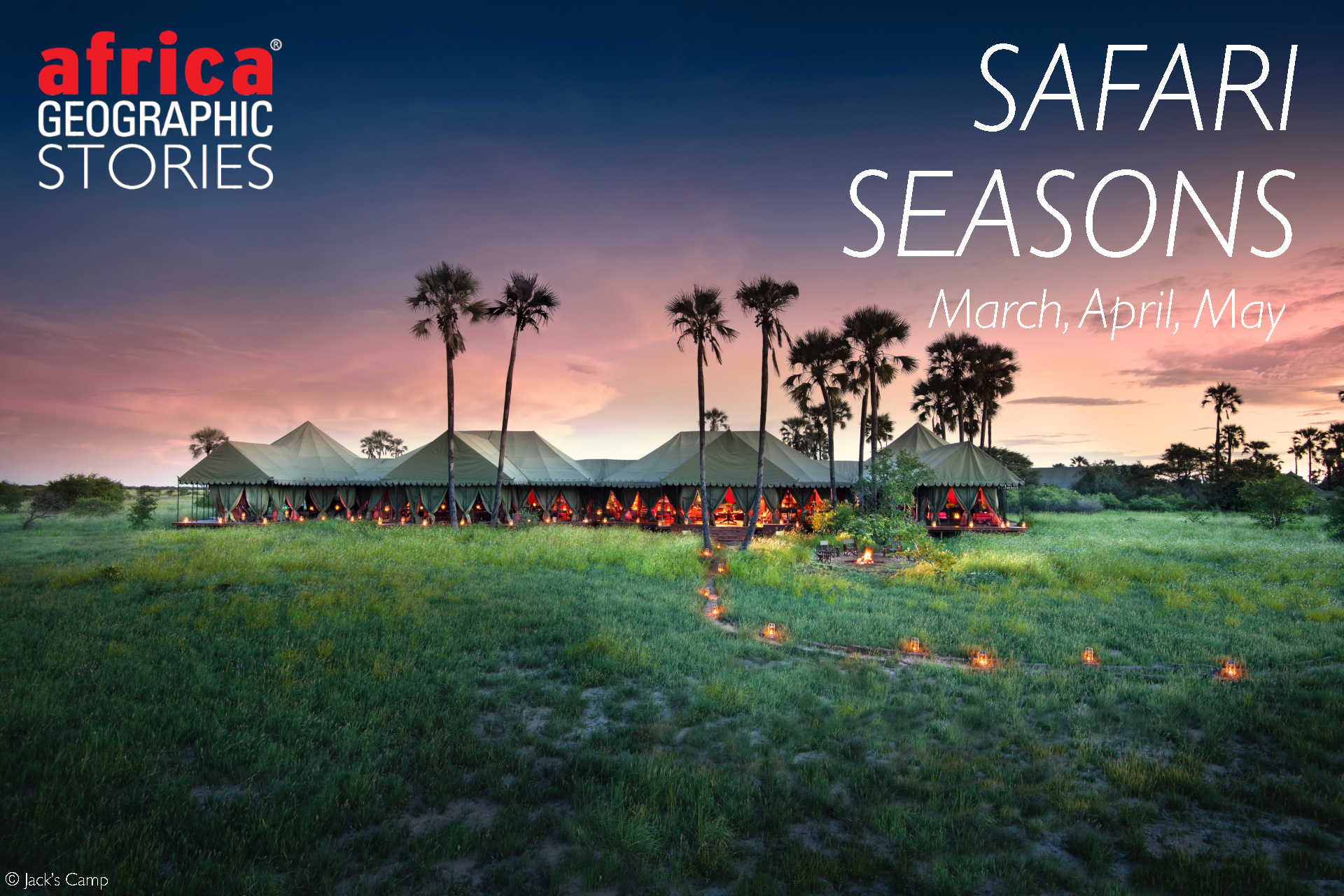 Safari in March, April & May

‘When is the best time to come on safari?’ This is an excellent question, but, like most good questions, it doesn’t have a simple answer. Africa is a vast continent straddling the equator, boasting six time zones. The upshot of this is a vast area of profoundly differing vegetation, climates, topography and animal life that occupies the myriad niches provided by these variations. The good news is that there is always a good safari season in Africa. You just need to be aware of what you want to see and where you’d like to see it – then the ‘when’ becomes pretty simple.

Overview – March to May

Weather conditions in Southern Africa are best at this time of year with clear skies, stars forever and golden warm temperatures. Wildlife viewing can be a little patchy in some places as much of the vegetation remains thick, and animals do not need to travel far for water. It’s the beginning of safari season in Zambia and the wetter parts of northern Zimbabwe. East Africa is experiencing their long rains, but there are still some fantastic opportunities to travel in the low season. This is the perfect time to adventure to Chad in Central Africa.

It’s autumn in Southern Africa, which means the heat of summer is becoming a memory and the rain has retreated. This is a great time to visit South Africa in particular. On safari, this is probably the best weather you’ll experience both in the Greater Kruger area (national park or the private reserves on the western fringes), the Highveld (Madikwe Game Reserve) and the Kgalagadi Transfrontier Park. The days are warm but not blistering, the evenings and mornings are cool but not cold, and there is very little wind or cloud – blue skies for months. The bush is still quite thick after the rainy season, but that’s not to say you won’t have some epic animal encounters with a backdrop of green and gold leaves.

March and April are good months to visit Cape Town, the winelands and the garden route, the edge has come off the summer and the coastal winds are becalmed. Long, languid evenings in the winelands; pristine, uncrowded beaches and changing colours characterise a visit at this time of year. That said, beware into June as the Mediterranean climate will turn wet and windy.

For the adventurous, May to June is a great time to visit Gorongosa National Park in Mozambique. This is the start of the high season but there are never many people in this massive area of woodland, plains, rivers and granite outcrops. The wet is receding with the violent temperatures. There will also still be some late migrators around for those with a birding bent.

In Namibia, Etosha National Park remains a patchy destination during this period with dispersed water and, therefore, animals. Sossusvlei, however, is stunning – cooling down, not cold and with clear skies for stars that make you feel as if you are living among them (which you are of course!). This is a great time for desert photography both day and night.

The Central Kalahari Game Reserve in Botswana is cooler, the risks of being mired in mud are minimal so this is also a good option before the cold of the Kalahari winter. Also in Botswana, Chobe National Park is cooler and drier but not crowded yet. By June, the big zebra herds of the migration will be concentrating on the floodplains of the Chobe River. The Okavango Delta floodwaters have not arrived yet, so you might pick up some great discounts but be aware that only those destinations very close to permanent water will be able to offer water activities (mekoro and motorboat rides).

Up into Zambia and the wetter parts of Zimbabwe, the rainwater is starting to recede. April sees the start of the safari season in Luangwa National Park (north and south) and Kafue National Park, with Liuwa Plains National Park offering a dry season window in May. Hwange National Park is cooling down, the vegetation is thinning out and the game viewing is good. If you time your trip as the lodges re-open, you might find some good discounts and fewer people.

If you feel like a freshwater beach with a safari close by, Lake Malawi is good as the edge comes off the summer heat and Liwonde National Park gears up for the busy safari season.

This is really not the best time to visit East Africa as, with luck, it will be experiencing the famous long rains. Many lodges will be closed in the Selous Game Reserve and Ruaha National Park (Tanzania) and other destinations will have limited access to their reserves. Remember, however, that the Ngorongoro Crater is accessible all times of the year. Much of the Maasai Mara National Reserve is accessible and there are very few people so it is possible to have a wonderful time in the so-called ‘secret safari season’ – but make sure you have a good rain jacket!  In Tanzania’s Serengeti National Park the Great Migration is in the southwest of the park, with plenty of youngsters around – come prepared for rain.

North into Uganda, much of the country is very wet but mostly still accessible. If you can cope with the rain and slippery conditions, then all the classic destinations are accessible (Bwindi Impenetrable National Park, Queen Elizabeth National Park) with Murchison Falls National Park being the best option, especially in March.

Likewise, Rwanda is wet, but gorilla trekking in Volcanoes National Park is possible if you are fit and able to cope with the slippery conditions. You could be lucky with discounts. In Ethiopia, you might find light rains, but this shouldn’t hamper trekking and you could find some good discounts in the northern highlands and Bale Mountains National Park– just expect rain daily.

If you are feeling adventurous and in search of an unusual safari, Zakouma National Park in Chad is excellent in March and April, boasting Kordofan giraffe, Llewel’s hartebeest and over 400 bird species. This is a remarkable conservation success story, an adventure-safari bucket list experience.

April and May in Seychelles is a great time for scuba divers with excellent visibility up to 30m. Zanzibar, Bazaruto and the Quirumbas archipelago are also options, but the chances of rain are high. Temperatures, particularly off the coast of Mozambique, will be pleasantly mild. 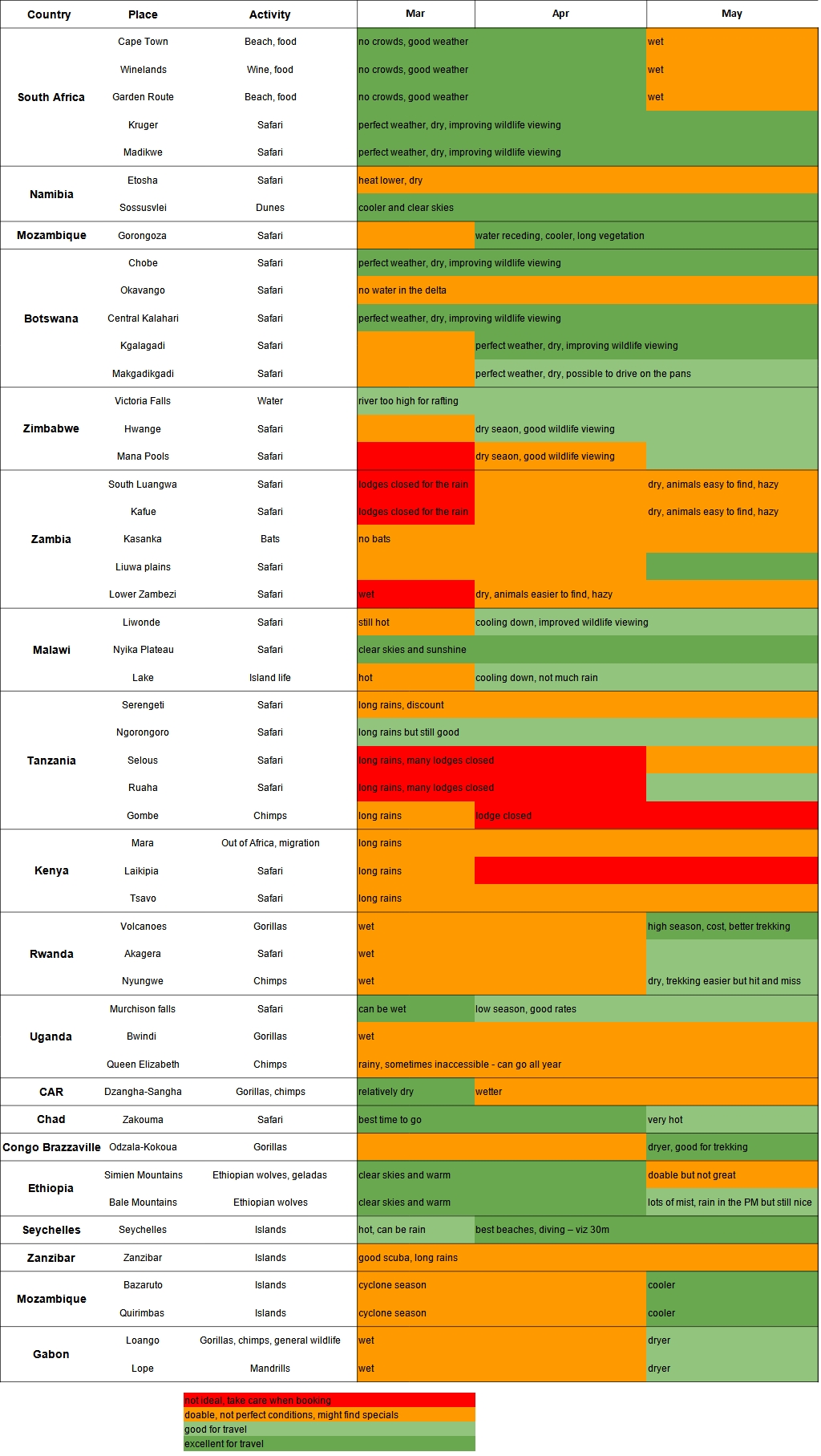