In the wake of the killing of Cecil the lion in Zimbabwe, we are seeing real conversations about hunting: its viability and its ethics.

It has opened some tough discussions, like if we should all boycott Zimbabwe, or whether lion hunting is in any shape or form a viable conservation tool.

I don’t think it’s a good idea to boycott Zimbabwe. Thousands of local Zimbabweans live off photographic tourism and a range of other jobs that are not involved in hunting. Many of these people have chosen non-hunting industries because they already don’t like the business or ethics of hunting.

The other day I was filming some lions hunting zebras and I reflected on the difference between a hunting lion and a man hunting a lion. Both are undeniably violent acts. But one is necessary, the other is not. One is for food, the other is not. One involves no great celebration of death, one ends in high fives and alcohol celebrations and often some blooding rituals.

In essence, a lion hunt may be vicious, but it is not cruel. The activity of Dr. Palmer’s (the hunter who paid for and killed this famous lion) is one of malicious intent and cruelty, and there are almost no examples of that in nature.

Beverly and I started the Big Cats Initiative specifically because of incidents exactly like this shooting by Dr Palmer, which is not unique. His excuse is incredibly weak – that he didn’t know he was on land where it is illegal to hunt and that he also did not know that he was shooting a collared research lion baited out of the park! Hunters come to at least seven countries in Africa to shoot over 500 lions a year. 80% of those lopped-off heads and skins go back to the United States.

This is going on while we have seen 95% declines in lion populations over the past 60 years and continue to lose five lions a day. Loss of habitat is partly responsible, conflict with livestock and poaching also play a role — but so does hunting. If we stopped killing for fun, we could stop the slide in the lion populations.

This desire to kill has fuelled an entire industry called “Canned Lion Hunting,” where lions are bred in cages and released for hunters to kill. For what? What is it that drives some of us to want to slaughter an animal that we have come to understand, from 32 years working with lions, are mostly passive and wanting to go about their business.

Hunting is largely about ego

Every time I have tested the desire to hunt and kill a lion with hunters, I get a range of answers from that it is for conservation, to it being about saving villagers from a marauding lion, to that it is cropping out the old, sick and surplus. (Mostly I just get death threats.) But in reality, it seems it is all about showing off.

Hanging a head in the boardroom or the slaughterhouse-style trophy room, with its staring eyes and fangs at the ready, sends a signal to the impressionable visitor about the “brave” hunter. If it were all about the wonderful outdoors, there are thousands of outlets for the sportsman that don’t end in the blood and lolling tongue of a dead lion.

It is not brave to shoot a lion

I state this again: It is not brave to shoot a lion. Wrestling a lion to death with your bare hands might be brave. But safely at the long end of a telescopic sight and a high-powered rifle, or even with a state-of-the-art compound bow and arrow, it isn’t brave. It’s target practice. Shooting elephants is even easier, a little like shooting at a barn door. 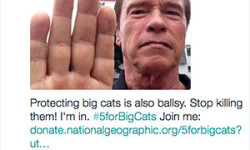 The fact that Palmer had to drag a bait to get Cecil the lion out of a park, and out of protection, and that he shot him with an arrow and then later a bullet, is not only a testament to poor ethics, but also to the damaging impact already created in designated hunting areas where lions are so depleted that they have to bait ‘Cecils’ from conservation areas.

The science is clear: Lions decline in number where they are hunted. The fact that anyone still debates this is astounding, but at least 55,000 members of a group called Safari Club International do. They feel that shooting lions protects them, despite study after study over decades that prove the contrary.

We worked in an area once that saw every single male lion killed by hunters. The male cubs that were left behind grew up, started mating with their sisters and mothers, until these young males were also shot.

Soon we saw deformities developing and the collapse of the entire population.

No national wealth in hunting

There is no doubt in my mind that the hunting of lions is morally bankrupt. But let’s look at the economics.

Botswana stopped lion hunting over 10 years ago, and all hunting in 2014. The lion population is at least stable now.

One former hunting area called the Selinda Reserve was converted to only photographic tourism. The increase in wildlife has been spectacular; the increase in revenue to government and its people is something like 1,300%. Employed people have the benefit of real skills transfer and training. The old hunting companies hired minimally; now instead of 10 or 12 jobs in these areas there are 180 people employed full time just in this one reserve.

Hunting in the countries that still allow it contributes less than 0.27% to the national GDP. In Botswana, ecotourism is the largest employer in the northern districts and hires 40% of the working population.

One hunting license may kill 23 lions

Every time one hunting license is issued, a male lion is shot. However, males often work and live in groups of two like Cecil and his partner male. They need these partnerships to defend their territories and the females in the prides. When one is killed, the remaining male is left vulnerable to attack, and is most often ousted by marauding males.

Males coming into a pride have one desire, to start their own families, not to raise the ousted male’s cubs. So they immediately kill all the cubs in the pride. On average a pride may have between 10 and 20 cubs (if the average pride is eight females.) One license kills one male and his partner, as well as about 20 cubs, and often a mother who wants to defend her cubs. Total tally for one license: 23 lions! This is what we can expect for Cecil’s pride, a group of six females.

Hunters will say, ‘what about safari hunting of cattle raiders?’ This is totally impractical. Firstly, a safari is booked months if not years out. A cattle post, if raided by lions, is something that needs to be reacted to the next day. I have no idea how anyone could sell a safari for the first week in August 2016 and know that they could be called in to help solve a cattle-raiding problem during that week. These problem animal hunts are bogus and another falsehood set up by a corrupt industry.

Secondly, most livestock raiders are females (often old) or young nomadic males. Neither of those two demographics is a hunting trophy. Hunters want the largest and best male lions with large manes. It’s a trophy after all! Besides that, if a 13-year-old Kenyan boy can come up with the ideal anti-lion device for cattle at night (random flashing solar-powered LED lights) then we surely don’t need guns to solve this issue.

Another myth is that hunters only shoot old males past their prime that have been cast out from the pride. In 30 years of studying lions, I have only come across three such males. All of them were so old and tired that you could have swatted them with a baseball bat. But more important is that when males are finally thrown out, they almost always lose their manes from stress, so as to not be carrying around a healthy mane that will attract aggressive attention from the resident males.

Some hunters of lions don’t bother too much about lion mane-deficiencies, of course. There are a few establishments in the U.S. that will provide trophies with hair extensions for undersized manes so that when displayed your lion will evoke gushing admiration rather than embarrassing “shames” as your friends look at a not quite fully grown male cub with its natural Mohican styled mane.

People do not change under threat of retaliation or fines. They change by peer pressure. The stuffed toys and protests outside of the hapless dentist’s office are sending a signal that enough is enough. A petition is circulating, calling on the U.S. government to list lions as an Endangered Species and giving them full protection. Only one group is opposing this, the hunting fraternity.

I hope that Cecil the lion has died for at least some cause: to rally everyone to get this important legislation passed and to stop the killing of lions for fun.