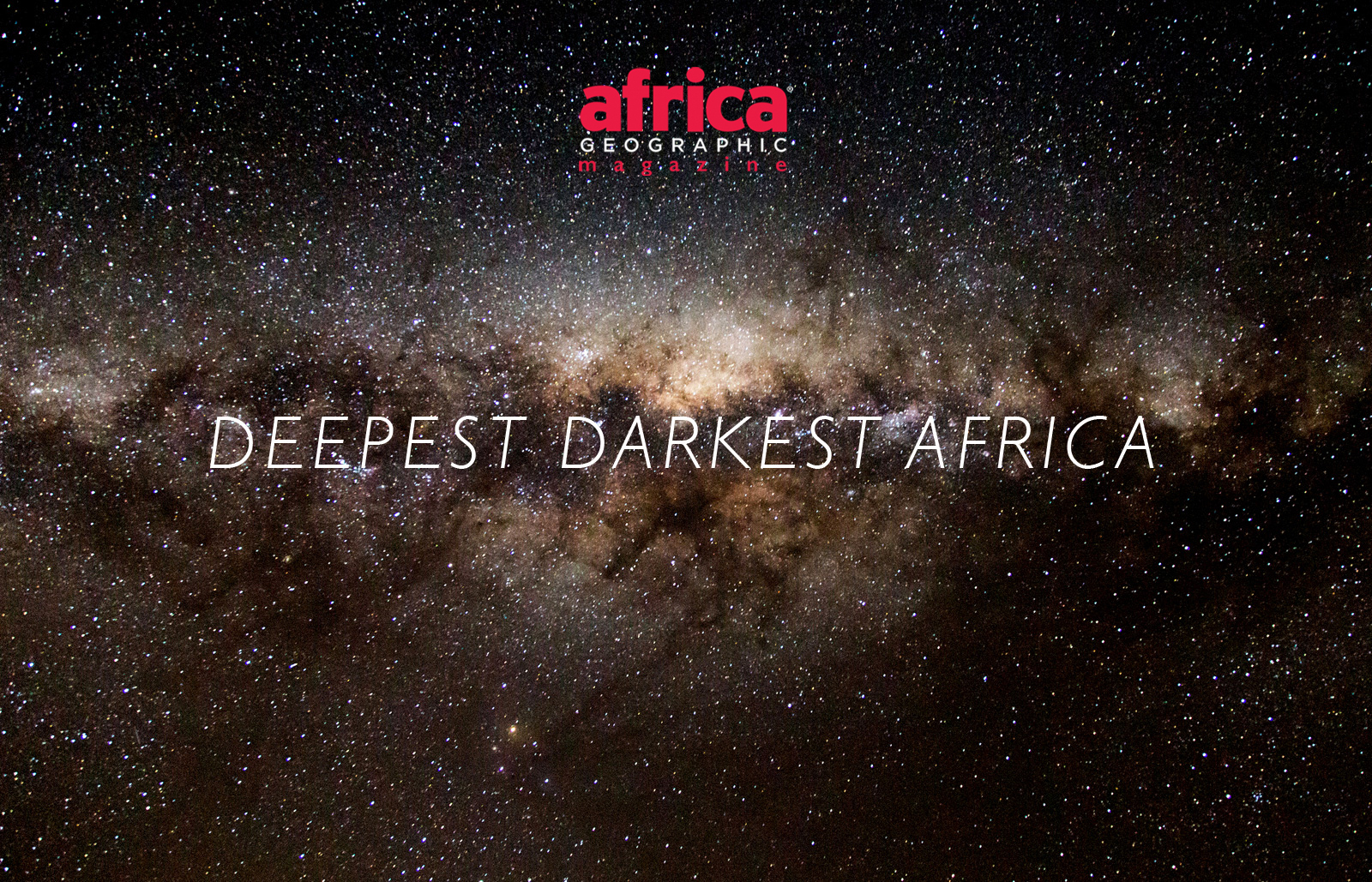 THE IMPORTANCE OF DARK SKIES TO NATURE AND MAN

In the far west of the Kgalagadi Transfrontier Park, lies an area of the Kalahari Desert thought to have some of the darkest skies on earth. The forthcoming designation of the !Ae!Hai Heritage Park, as South Africa’s first international dark-sky protected area, will conserve a critical element of true wildness – primeval, deepest darkness – and will help protect both cultural heritage and natural ecological processes.
I chatted to Jan Oorg who, I’d been told, is one of the greatest living gemsbok hunters among the ‡Khomani San. He was born under a camel thorn tree in 1960, in what is today part of the South African section of the Kgalagadi Transfrontier Park. This was before the ‡Khomani San were “cleared” from the park, so he honed his hunting skills in what sounds like another aeon.

Jan understands what it is like to live in balance with nature – it’s not just a marketing slogan to the people also known as Bushmen. And living off the land was tough back then, so a son who couldn’t hunt would be a burden. Jan’s family didn’t undertake extended pursuits like some other ‡Khomani San communities, but relied on the accuracy of throwing spears after briefly stalking their quarry. Jan told me how, on his first childhood hunting trip, his father calmly pointed to a gemsbok and said, ‘that one’. He followed it up with the chilling warning: ‘If you don’t kill the gemsbok with one spear, you are dead.’

In !Ae!Hai Heritage Park, it is possible to escape camp lights and cell phone reception

Jan’s spear did kill the gemsbok, so he lived to tell the tale – and, nearly half a century later, we met. We sat a couple of kilometres east of the place he was born, at today’s Twee Riverien Camp, where a shop, petrol station and swimming pool are an age away from the Kalahari Jan grew up in. But if you head North West, to the !Ae!Hai Heritage Park, it is still possible to escape camp lights and cell phone reception – a partial step back in time.

Jan related how, in 2002, !Ae!Hai was restored to the ‡Khomani San and the Mier in a settlement with the South African government and SANParks. These two local indigenous communities benefit from revenue generated at !Xaus Lodge, the only tourism infrastructure within the heritage park, and retain legal title to the land, which SANParks leases from them.
The status of !Ae!Hai as community-owned land, its almost entirely undeveloped nature, and its gloriously dark night skies mean it is set to become South Africa’s first protected dark-sky area, as designated by the International Dark-Sky Association (IDA). Joining the likes of Death Valley National Park in the United States, it will become one of a scattering of wilderness areas treasured for their inky skies and bright constellations – and there are stringent requirements to keep them that way.

The IDA works with communities, astronomers, ecologists, and lighting professionals to raise awareness about the adverse effects of light pollution, and the value of keeping the night sky natural. For instance, part of !Ae!Hai’s lighting management plan requires !Xaus Lodge, the only light source in !Ae!Hai, to ensure its few external lights are fully shielded. This handful of lights in the 50,000-hectare land mass are all directed downwards, minimising light pollution. Other IDA requirements include an outreach program to educate and celebrate night sky custodianship as well as measures to encourage the growing astro-tourism industry.
!Xaus Lodge has offered guided walks by Mier and Bushmen trackers since its inception. But, since they started working with the IDA they have also installed a telescope for night-time astrology and cultural talks so that both the ‡Khomani San and the Mier can share their own distinct sky lore with lodge guests.

Protection from light pollution clearly benefits our educational and cultural well-being but it goes further. Light pollution can damage entire ecosystems. Who has not heard the sound of a moth repeatedly smashing into a light bulb while circling it until exhaustion? Brightly lit towers can confuse migrating birds and cause collisions, and artificial lighting reduces the ability of some species, like fireflies and glow worms, to communicate using bioluminescent flashes to attract mates. These examples are easy to understand because they either lead to mortality, or involve species that create their own light, but there are likely other more subtle impacts. For example, the reproductive activities of many species of amphibian are nocturnal. Light pollution, it has been suggested, could be a factor in the global decline in amphibian numbers. It is hard to fully comprehend the historic ecological impact of light pollution because it is only recently that people have started studying the phenomenon, and so few genuinely dark places remain.

Gruckie is a ‡Khomani San tracker working at !Xaus. He is a generation younger than Jan, and accepts there is no realistic chance that his people will live in the park as they did in times past. He believes IDA designation is one way to encourage pride in ‡Khomani San heritage, encourage astro-tourism and ensure !Xaus is not seen as just another wildlife-focussed lodge. As well as sharing some of his traditional knowledge of tracking and medicinal plants, Gruckie told me stories of how his ancestors would dance at full moon, and how the ‡Khomani San believe the stars in the Orion constellation to be eland.
When I told Jan that light pollution in many cities means few, if any, stars can be seen from them he looked saddened and said, ‘The heart of these cities and the hearts of their people must be in turmoil.’

In the !Ae!Hai I could see the streak of the Milky Way silently slicing the night in two. If we lose darkness we lose the best way to fully appreciate how insignificant we are, and the fleeting nature of our own existence. International Dark-Sky designation will preserve natural ecological behaviours and cultural knowledge, raise awareness of the impacts of our ubiquitous lighting systems, and encourage the development of the fledgling astro-tourism industry in a region with a unique cultural history.
I remember Jan’s words as clearly as I could distinguish the constellations in the !Ae!Hai sky. ‘Look tonight, the stars will be closer. You will see a lot of clarity [and] remember that old Bushman you met.’ In Jan’s lifetime the Kalahari and the meaning of wilderness has changed markedly, but the darkness the IDA seek to conserve is surely one element of wilderness we must not relinquish so easily.

Bushmen or San?
The ‡Khomani San is the name given to San in the southern Kalahari, but many so-called San prefer the term “Bushmen”. Jan told me he prefers Bushman because, ‘if you are a Bushman, you are a Bushmen. If you are not proud of [your heritage] that doesn’t help. I have no pain in being called Bushman.’ Younger San/Bushmen seem less concerned by the distinction.

Mier
The Mier are a predominantly agricultural “coloured” community, descended from those who fled British rule in the Cape in the 1860s. The Mier share a similarly tragic history of land dispossession with the Bushmen, and have their own cultures and sky lore, but lack the sometimes romanticised perceptions of the Bushmen. The designation of !Ae!Hai will hopefully raise their prominence. 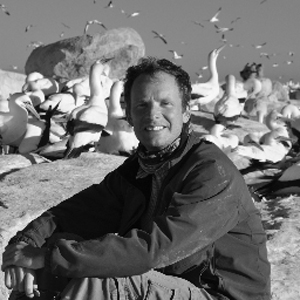 DAVID JOHNSON has a focus: the impacts of human population and consumption growth. “It’s the growing number of us humans and the amount we consume which is the greatest threat to maintaining healthy ecosystems. You can worry about climate change mitigation, but when there are twice as many of us, can those mitigation measures be effective? For marginalised rural communities the situation can be worse, they often rely on healthy ecosystems for food, water, medicines, fuel and livelihoods” he says. With the population of Africa expected to double by 2050, David believes a new approach to conservation is needed. In partnership with the Endangered Wildlife Trust and NGOs specialising in voluntary family planning, women’s rights, early childhood development and job creation, David is seeking funding for a new style of integrated programme, which will lead to greater community and environmental benefits than had those organisations acted alone. David visited the Kgalagadi Transfrontier Park to write DEEPEST DARKEST AFRICA in which he expounds on the local community and the extraordinary steps they are taking to preserve that particular ecosystem. You can read more of his work on his website and follow him on Twitter: @DavidJohnsonSA 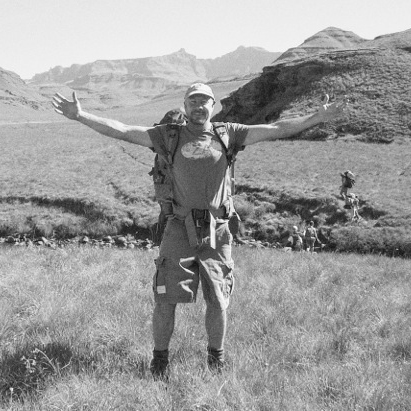 MAX BASTARD is a social documentary and travel photographer based in Kwazulu-Natal, South Africa. His career of over 20 years trying to perfect focus has spanned commercial, editorial, corporate, fashion, landscape and travel and has taken on many a grand adventure. Max now concentrates almost exclusively on Social Documentary and Travel photography, to a large degree working with local and International NGO’s and corporates to assist them in creating visual narratives around the social work they do. His images of the people of the Kalahari can be seen in DEEPEST DARKEST AFRICA. You can also see more of Max’s work on his website.