Lower Zambezi copper mine given the go-ahead

Posted on June 23, 2021 by teamAG in the News Desk post series.
ShareTweetPinEmailShareShareLinkedIn

The plan to develop a large-scale, open-cast copper mine in the heart of the Lower Zambezi National Park seems set to go ahead.

Nestled on the northern banks of the mighty Zambezi River, opposite Zimbabwe’s Mana Pools, lies the Lower Zambezi National Park in Zambia. It is one of Africa’s most pristine wilderness areas – remote, unspoilt, and spectacular.  For years dedicated individuals and organisations have been fighting against the proposed Kangaluwi mine, but the final appeal was dismissed in February 2021.

Mwembeshi Resources Ltd holds the licence for the mine, and the proposed mine site would cover 12km2 (1,200 hectares), situated between two seasonal rivers that discharge directly into the Zambezi River.

After close to a decade of delays and obfuscations, the High Court dismissed the case on a legal technicality in favour of Mwembeshi in 2018. The final appeal to the Court of Appeal of Zambia was dismissed in a judgement delivered by Justice Ngulube in February 2021, possibly marking the end of any legal challenges open to those looking to stop the mining operations.

The final barrier was the validity of the Decision Letter (and thus the Environmental Impact Statement) granting mining rights. After the ruling in their favour, Mwembeshi Resources immediately applied for an extension of validity. David Ngwenyama, an expert ecologist and one of the parties fighting against the mine, confirmed that the Zambia Environmental Management Authority (ZEMA) had granted the extension in June 2021.

The argument that the previous judge had failed to consider the public interest of the matter was summarily rejected. 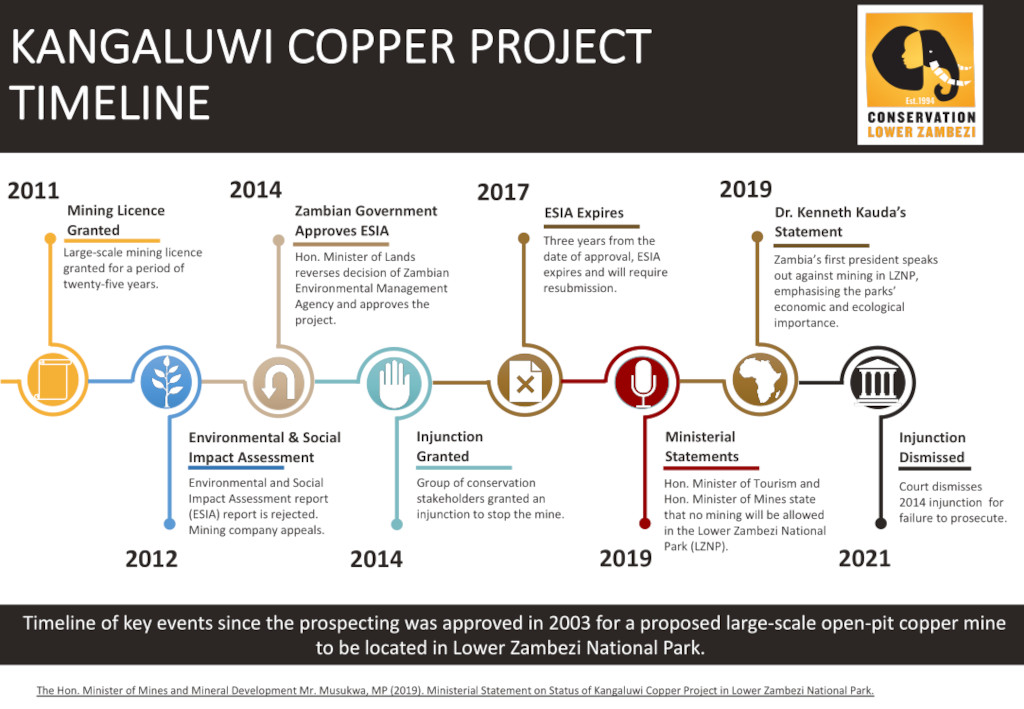 The company and legal loopholes

Bermuda-registered Mwembeshi Resources Ltd is a subsidiary of Australian-owned Zambezi Resources Ltd (subsequently renamed Trek Metals). The parent company was then sold to Dubai-based Grand Resources Limited – a company that has proved to be impossible to contact.

The Zambian Mines and Mineral Development Act of 2008 does not contain any substantial provisions relating to mining in protected areas. The Environmental Management Act of 2011 does not require a developer to carry out a fresh EIS following the expiry of the period of validity of the Decision Letter (usually three years). All that is required is a request for extension – an administrative arrangement that does not require a public hearing nor any other form of consultation with stakeholders.

For foreign investors who face more robust legislation in their own countries, Zambia is an easy target. Political games and murmurs of corruption have conferred a relentless momentum to a project that may not even be economically viable. Hamstrung by procedural regulations and an insubstantial legal framework, the courts have done little to stand in Mwembeshi’s way. Ultimately, the final judgement did not even delve into the case’s merits.

It goes without saying that an open-cast copper mine in the centre of Lower Zambezi National Park would do tremendous damage to the environment and biodiversity of the park. The devastating effects would extend to polluting the Zambezi River itself and affect neighbouring Mana Pools, the surrounding ecosystem in Zimbabwe and Mozambique.

The mine saga galvanized a diverse community of people in Zambia to rise up against the mine –  NGOs, private individuals, community organisations, conservationists and ecotourism operators. The potential mine has also given rise to a new generation of environmental activists that didn’t have a voice before. Zambian youth formed a group called IMPI and organised marches to deliver petitions, held press conferences, and created a lot of noise when the appeal was dismissed in 2019.

One of the people involved is ecologist David Ngwenyama. He joined the original court battle in 2014 in his personal capacity, believing that it represented a collective fight to protect his country’s heritage. When the High Court dismissed the case, he filed the appeal at a personal legal cost of some $50,000. For seven years, he has fought for the future of Lower Zambezi National Park.

Mr Ngwenyama has now reached out to ZEMA to allow the setting up of a tripartite meeting with the developer and ZEMA to set strict biodiversity offset and associated conditions including a program of environmental social monitoring if the mine is allowed to proceed as is. ZEMA seems agreeable to this.

There is also some disagreement over whether or not Mwembeshi is legally obliged to re-do the EIS given that nine years have passed since the original EIS but Mr Ngwenyama is of the opinion that Mwembeshi is now free to break ground. Various stakeholders are looking into possible legal alternatives to stop the mine, and there are glimmers of hope in this regard.

The approval process seems to be irregular and the stakeholders above are trying to inform the public. The fact that two extremely contentious projects (farming in the Kasanka National Park buffer zone and the Lower Zambezi mining) which will both impact significantly on the environment were signed off with Parliament dissolved in the run-up to the elections, is worth consideration.

The WWF, CI, CLZ and a number of other stakeholders have developed a social media campaign to educate the local public on what the approval of the mine could mean (see below).

If you would like to support the cause to stop this mine going ahead. Sign the petition https://www.change.org/SaveZambeziSafeZambezi and join the movement https://www.facebook.com/savezambezi. Use the #SaveZambezi for any social media posts.