5 interesting facts about the Himba people

All over Africa, some tribes like the Himba still respect and live according to the traditions of their ancestors. Other examples include the Maasai tribe in Kenya, the Pygmies in Congo or the many tribes that call the Dogon Valley in Mali their home. However, the one that intrigues me the most is the Himba tribe in north-western Namibia. Here are five interesting facts about the Himba:

The first settlements of the Himba people can be traced back to the early 16th century when they crossed the Angolan border and chose Kaokoland (nowadays called Kunene region) as their new homeland. At that time, the word Himba did not exist because they had not yet separated themselves from the Herero tribe.

At the end of the 19th century, Namibia was plagued by a relentless bovine epidemic. Most of the cattle that the Herero depended on perished, and the tribe faced a great crisis. Subsequently, the tribe moved south and started to explore different regions to enhance their chances of survival. Still, some members decided to stay and rather struggle for survival in familiar territories. Then and there, the schism between the two tribes became a reality, and the Himba identity came into being.

Freely translated from the Otjiherero language, the word Himba means beggar. Why did they inherit this somewhat derogatory name? Well, after the schism, many of those that remained roamed the vast Kaokoland in search of cattle and crops asking fellow or other tribe members for help.

The red ochre cream that the Himba are famous for is made by pounding the ochre stone (Hematite) into small pieces. After that, the fragments are mixed with butter, slightly heated using smoke and applied on the skin. After many conversations with the elders of the tribe, I have concluded that the main reason for the red ochre is to establish a difference between men and women. Moreover, the red layer seems to help against the scorching sun radiation, while keeping the skin clean and moist, and to some extent, it blocks hair growth on the body. On top of the women’s head in the picture, you find the Himba crown: the Erembe. This crown is made of cow or goat leather and is placed on the head when a girl reaches puberty. The red ochre, however, is applied when the girls are old enough to look after themselves hygienically. The tribe’s men do not apply red ochre on their skin.

The Himba people stick to porridge. Every morning and evening they heat some water, wait until it boils, and put some flour in it, maybe add some oil and food is served. The flour is mostly from maize, but from time to time you might find some mahangu flour as well. Mahangu is another name for pearl millet; it is a prevalent crop in Namibia since it performs well in soils with low fertility. On rare occasions, such as weddings, the Himba do eat meat, but this is more an exception than a rule. 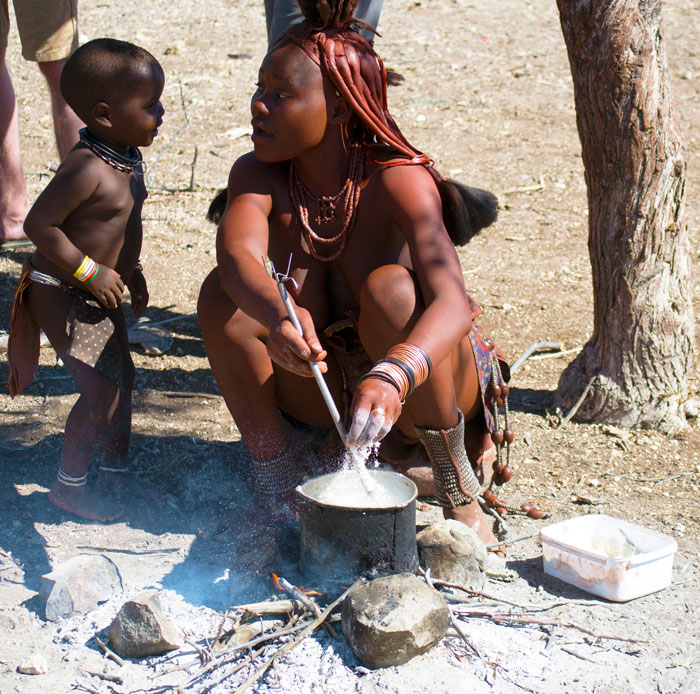 Himbas are animists, and their supreme being is called Mukuru. The way they communicate with their God is through the holy fire. The smoke of the holy fire rises towards heaven, which enables them to communicate with their ancestors who stand in direct contact with the Supreme Being. In every village, you will find the holy fire smouldering while next to it some logs of wood are put on a sacred stone to feed the fire when needed. You are not allowed to cross the holy line if you are an outsider or you have not been invited into the village. The holy line starts from the main entrance of the chief’s hut and goes straight, passing the holy fire, to the entrance of the cattle enclosure. One of the most remarkable Himba traits is that women are not allowed to use water for washing. This implies themselves and also their clothes. Again, according to the elderly, this dates back to the great droughts where water was scarce, and only men were allowed access to water for washing purposes. Apart from applying red ochre on their skin, Himba women do take a daily smoke bath to maintain personal hygiene. They will put some smouldering charcoal into a little bowl of herbs (mostly leaves and little branches of Commiphora trees) and wait for the smoke to ascend. After that, they will bow over the smoking bowl, and due to the heat, they will start perspiring. For a full-body wash, they cover themselves with a blanket so that the smoke gets trapped underneath the fabric. 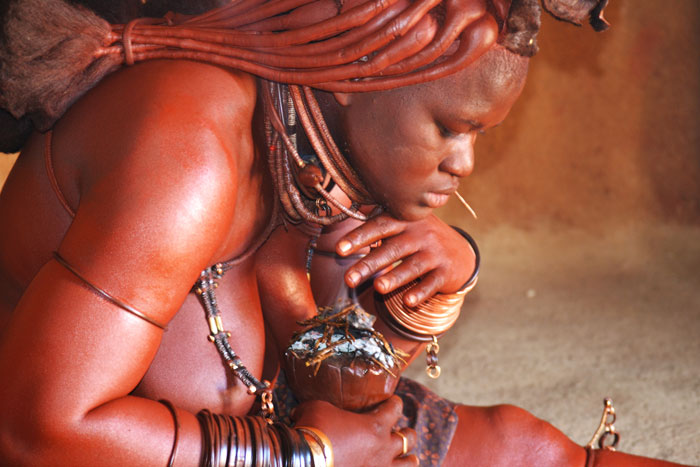 Also read: One Month With the Himba