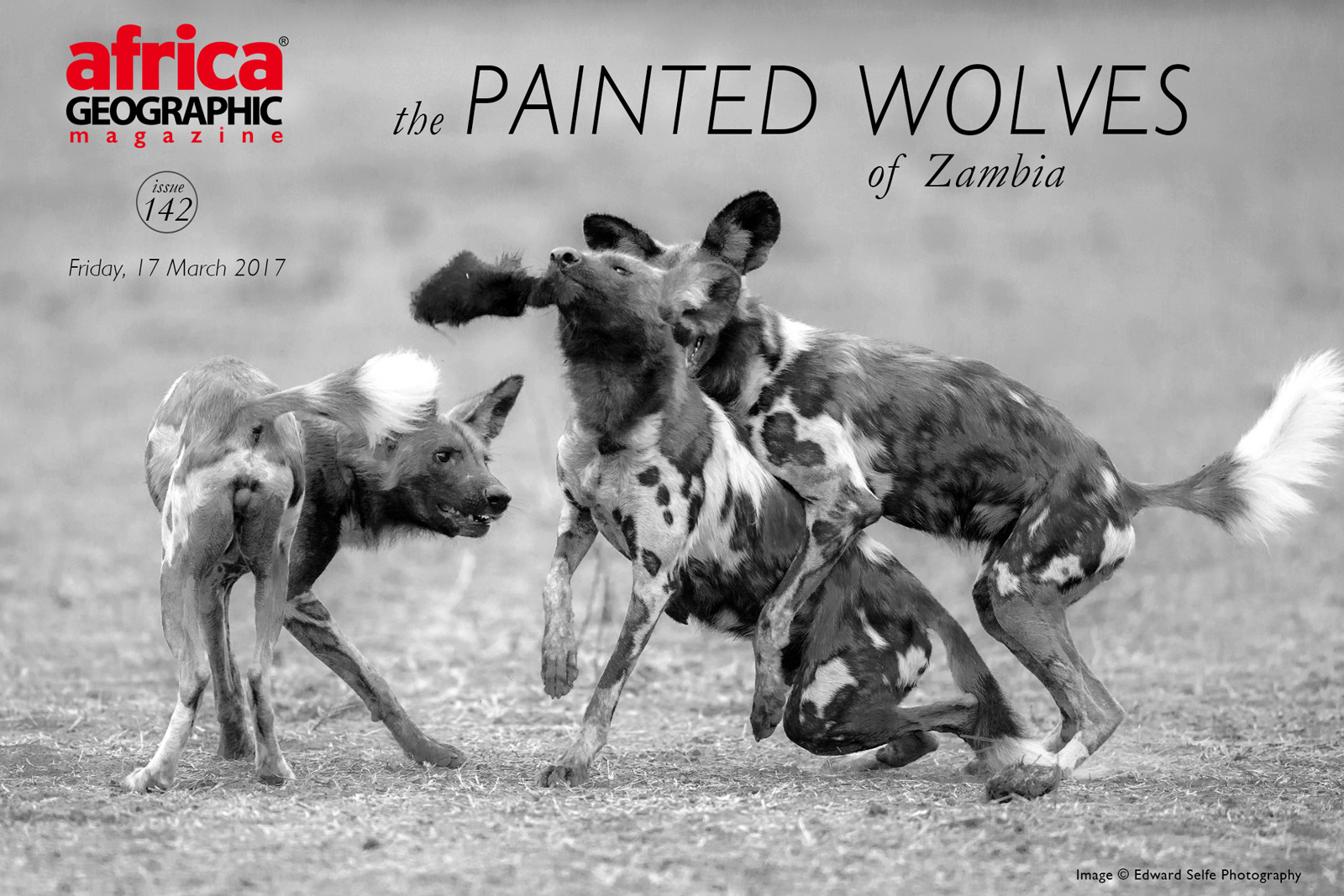 The Luangwa Valley goes to the dogs

While always close to the brink of extinction, one of Africa’s most threatened large carnivores – the African wild dog – has enjoyed a recent resurgence in Zambia’s Luangwa Valley thanks to the collaborative conservation work of the Zambian Carnivore Programme (ZCP), the Department of National Parks and Wildlife (DNPW), Conservation South Luangwa (CSL) and Chipembele Wildlife Educational Trust (CWET).

Based in South Luangwa, these organisations have a long history of working together and a wide array of expertise and resources that, collectively, have helped wild dogs to make a comeback in this critical region. 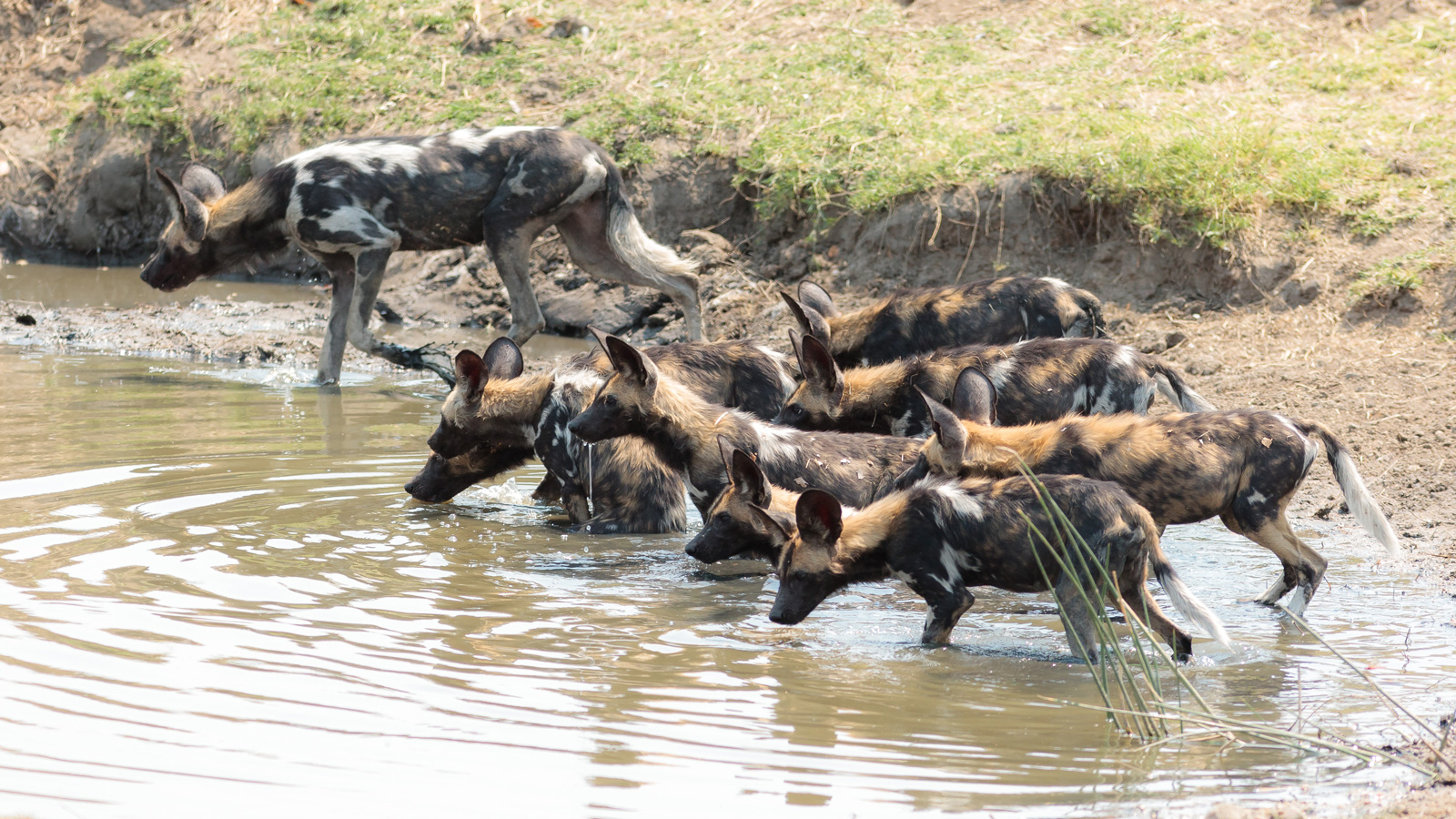 To anyone seasoned in African wildlife tourism, the African wild dog is widely considered to be one of the crown jewel sightings of any safari. Exquisitely patterned, highly social, fascinating to observe – and critically endangered – this unique species of the dog family was once actively exterminated as vermin throughout its range. It has now been wiped out from all but a handful of countries considered to have viable populations.

Today, the outlook for wild dogs has dramatically improved, but they are still threatened by an array of human impacts, ranging from habitat loss, bushmeat poaching and livestock conflict, to disease and roadkill. Resident populations are believed to exist in just 17% of their historic range in Africa – and Zambia is one of six remaining countries with viable wild dog populations. 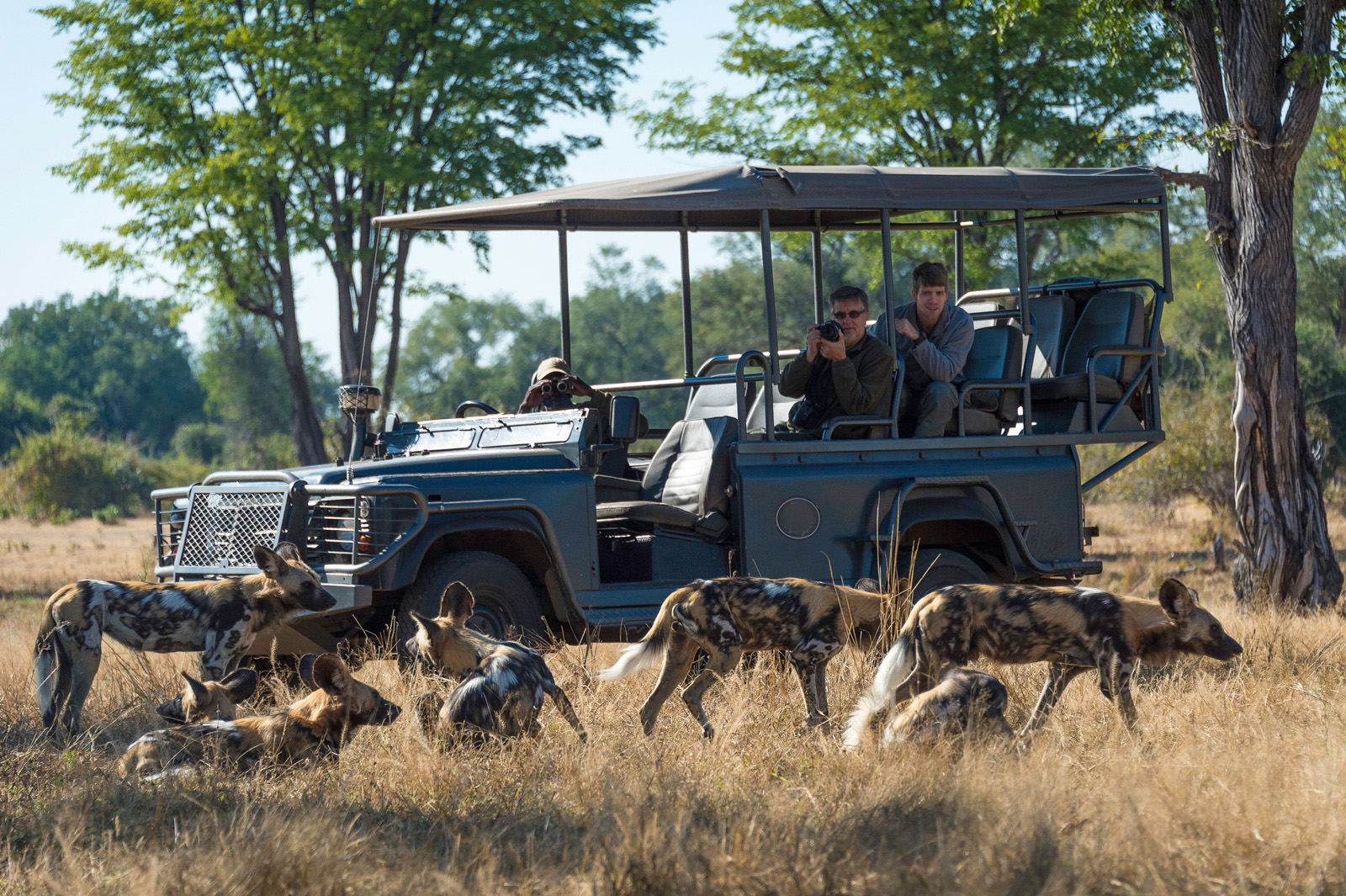 📷 Wild dogs are sighted regularly on safaris in the Luangwa Valley today. Photo by Dana Allen courtesy of The Bushcamp Company

Wild dogs have not always been present in large numbers in the Luangwa Valley. Long-time Valley residents will recall many years when wild dogs were not sighted at all, particularly after a catastrophic anthrax outbreak in the late 1980s and with many years of high levels of snare incidents recorded.

Never a species for which sightings can be guaranteed, today, the dogs are regularly sighted on safaris, and virtually every safari camp in the area is encompassed by at least one resident pack’s range. 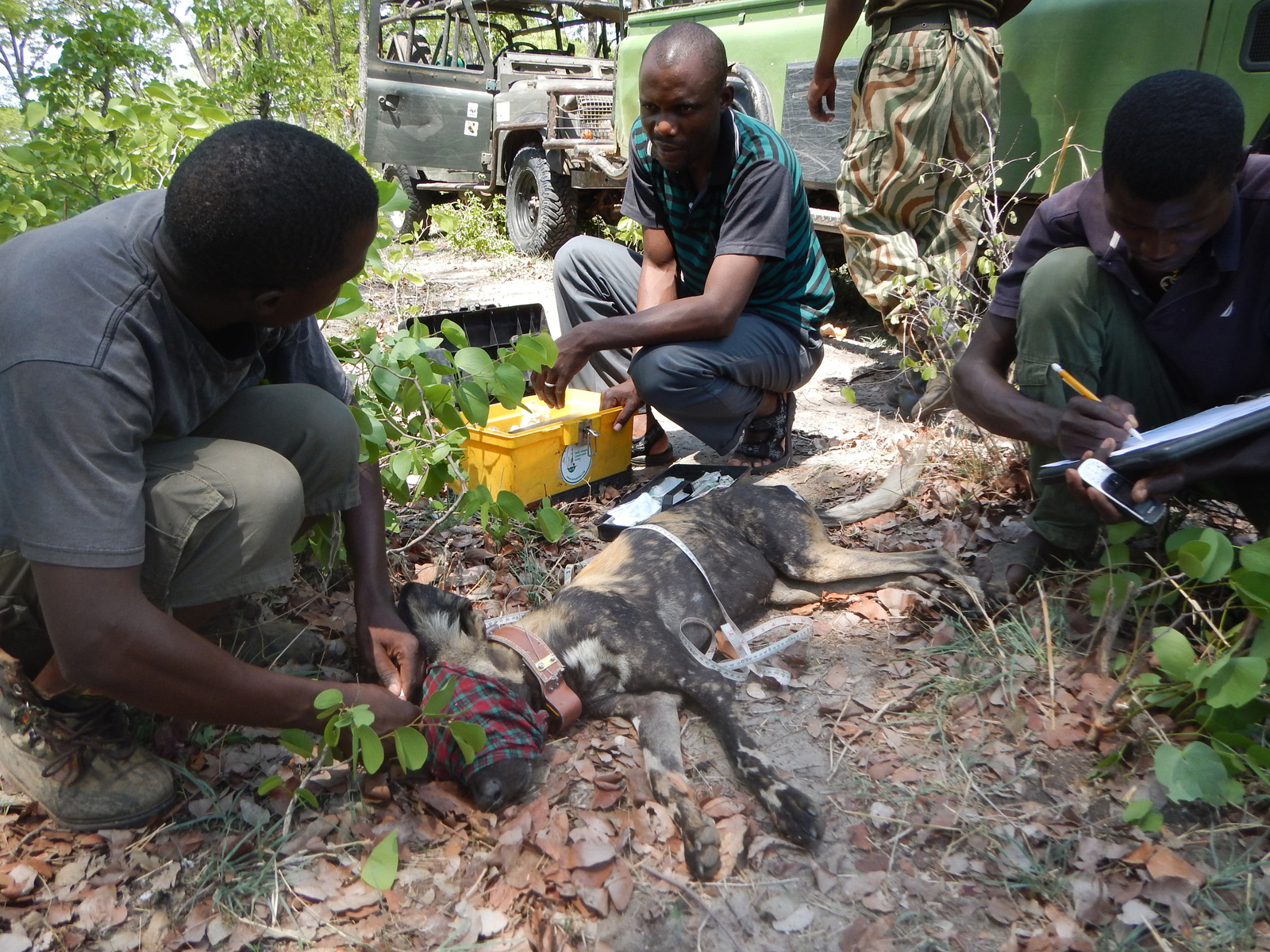 Wild dogs can travel up to 50km in a single day and range over thousands of kilometres. The long-term wild dog conservation efforts are facilitated by radio collars, which enable ZCP and DNPW teams to find packs, collect data, and rescue dogs from snares if needed.

While collars are not the prettiest sight on wild animals, particularly for photographers, they serve a vital purpose in keeping the dogs on the conservation map – and off the chart of extinction.

“These collars have enabled us to regularly find and follow a dozen packs in the Luangwa Valley,” said Dr Matthew Becker, CEO of the Zambian Carnivore Programme. “We’ve been able to regularly check up on the dogs, make sure none are snared – and in the case that they are, the collars allow us to find the pack, dart the dog, treat it and continually monitor its recovery.” 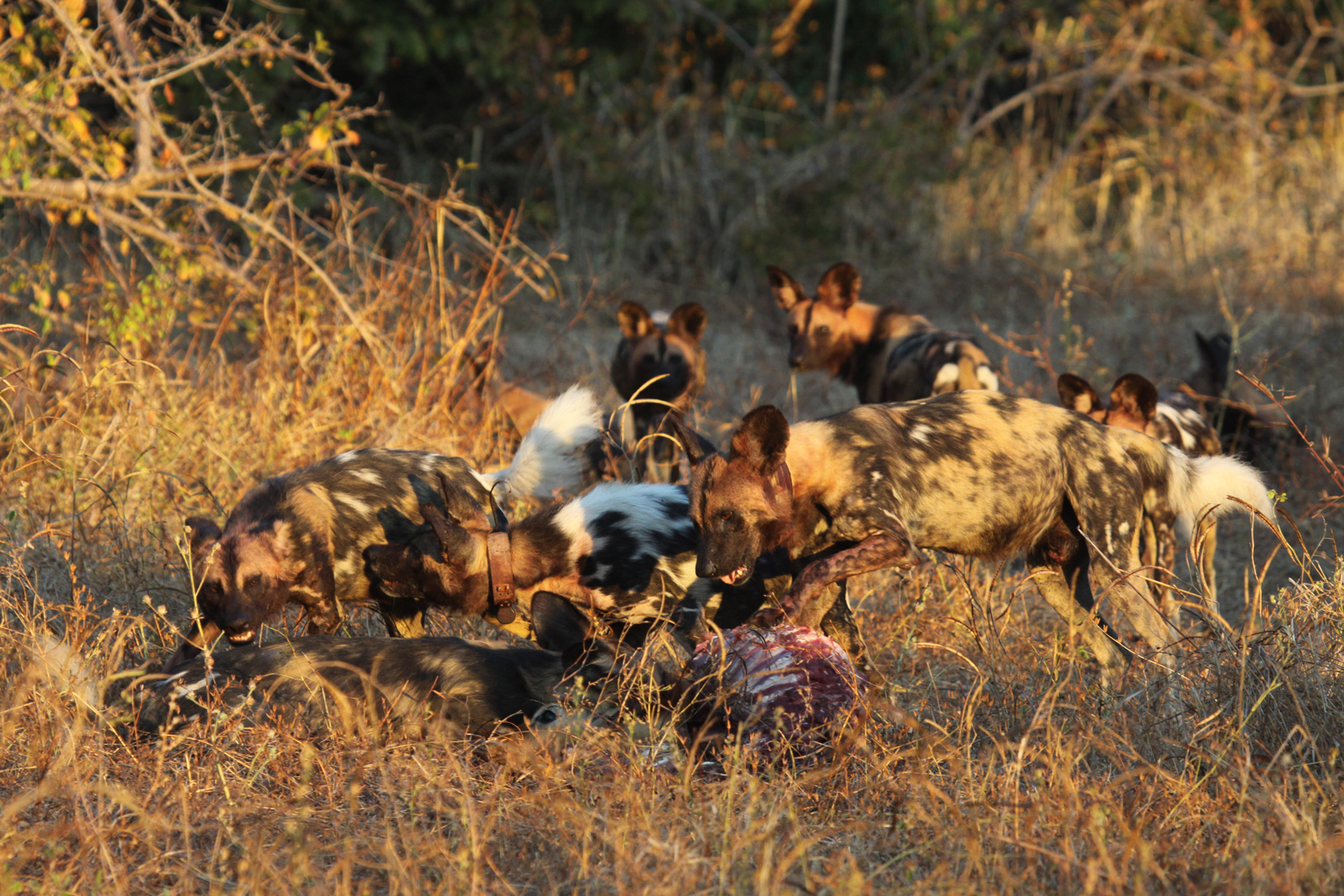 The prey-rich riverine woodlands and floodplains along the Luangwa River and its tributaries make for excellent hunting for wild dogs. They prey on small-to-medium-sized antelope, with impala, puku and bushbuck forming the core of their diets in the Luangwa Valley. They hunt in packs and are active, ‘coursing’ predators (as opposed to ambush predators such as lion and leopard), often chasing their prey over vast distances when encountered. Pack size is of paramount importance for wild dogs, with larger packs able to be more effective hunters, provide more food for their pups, raise more young and producing larger dispersing groups. 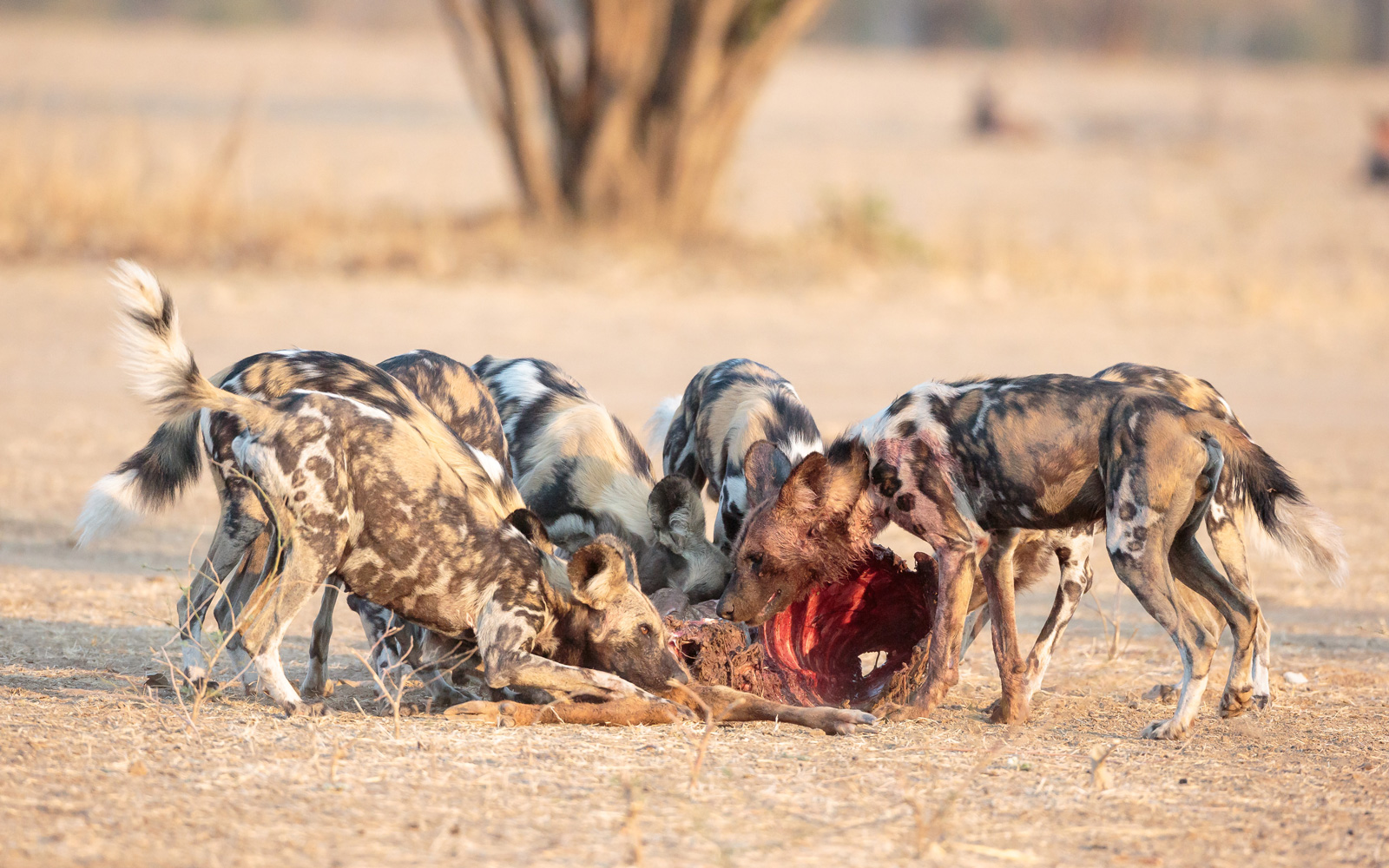 While Zambia’s Luangwa Valley is probably better known as the valley of the leopard or lion, given its high density of big cats, South Luangwa National Park is rapidly becoming well known for its growing population of wild dogs. 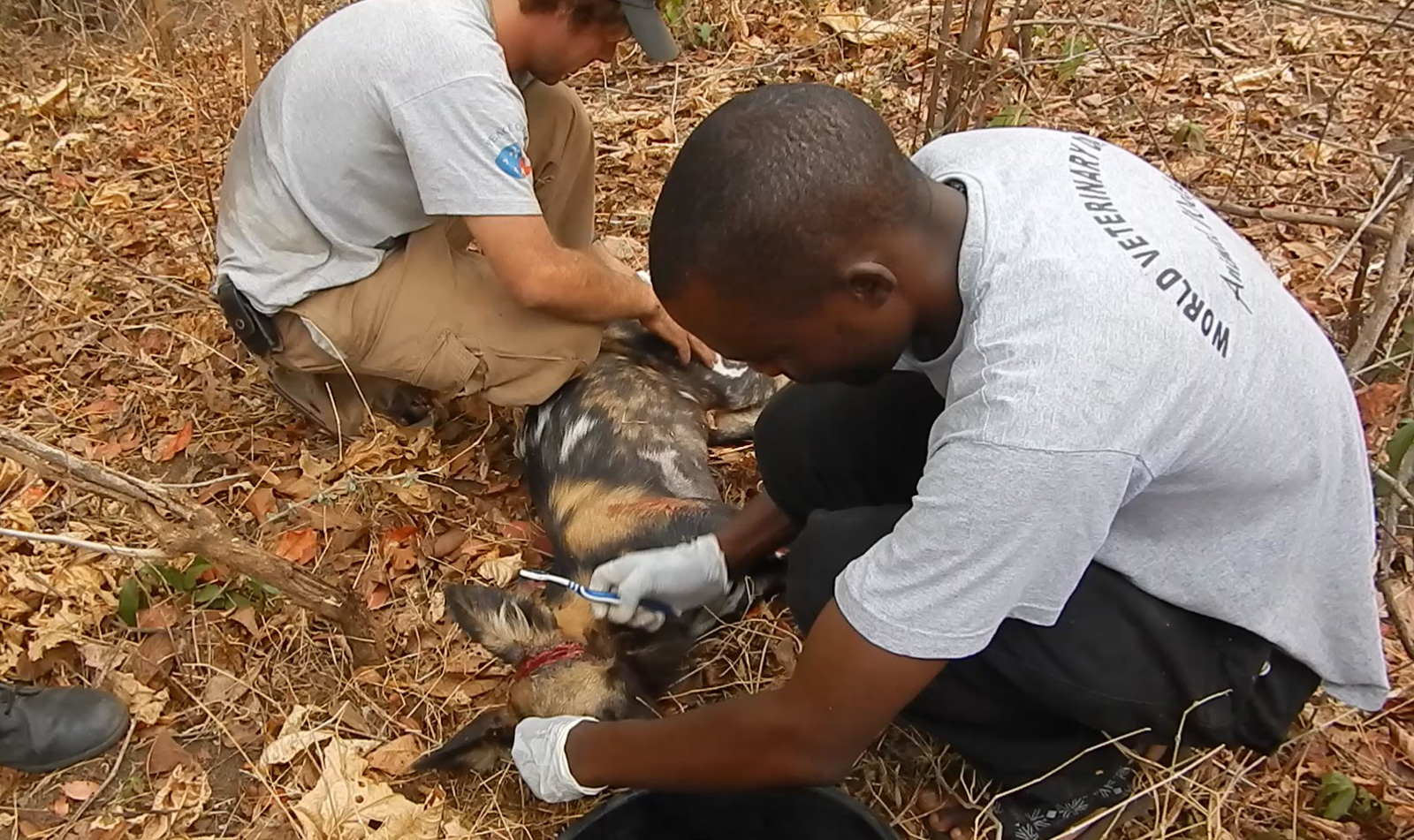 Unfortunately, human factors heavily limit wild dogs populations – perhaps none so much as the wire snares used by poachers for the region’s burgeoning illegal bushmeat trade. Set in profusion on game trails and waterholes to catch various antelope species, snares are deadly wire nooses that – like a fishnet – can catch, maim and kill anything unluckily enough to encounter them.

Consequently, snares result in massive amounts of ‘by-catch’, with a devasting effect on threatened species such as wild dogs, lions and elephants. Given that wild dogs range widely and are highly social, the threat of them encountering snares – and of multiple dogs getting snared at once – is very grave for dogs.

Snaring is probably the greatest threat to Luangwa’s wild dogs – and is a two-pronged threat for carnivores in causing mortality and reducing prey. In 2014, 10% of the Luangwa study population adults and yearlings were snared, with the largest pack losing several dogs, with 60% of its dogs snared. 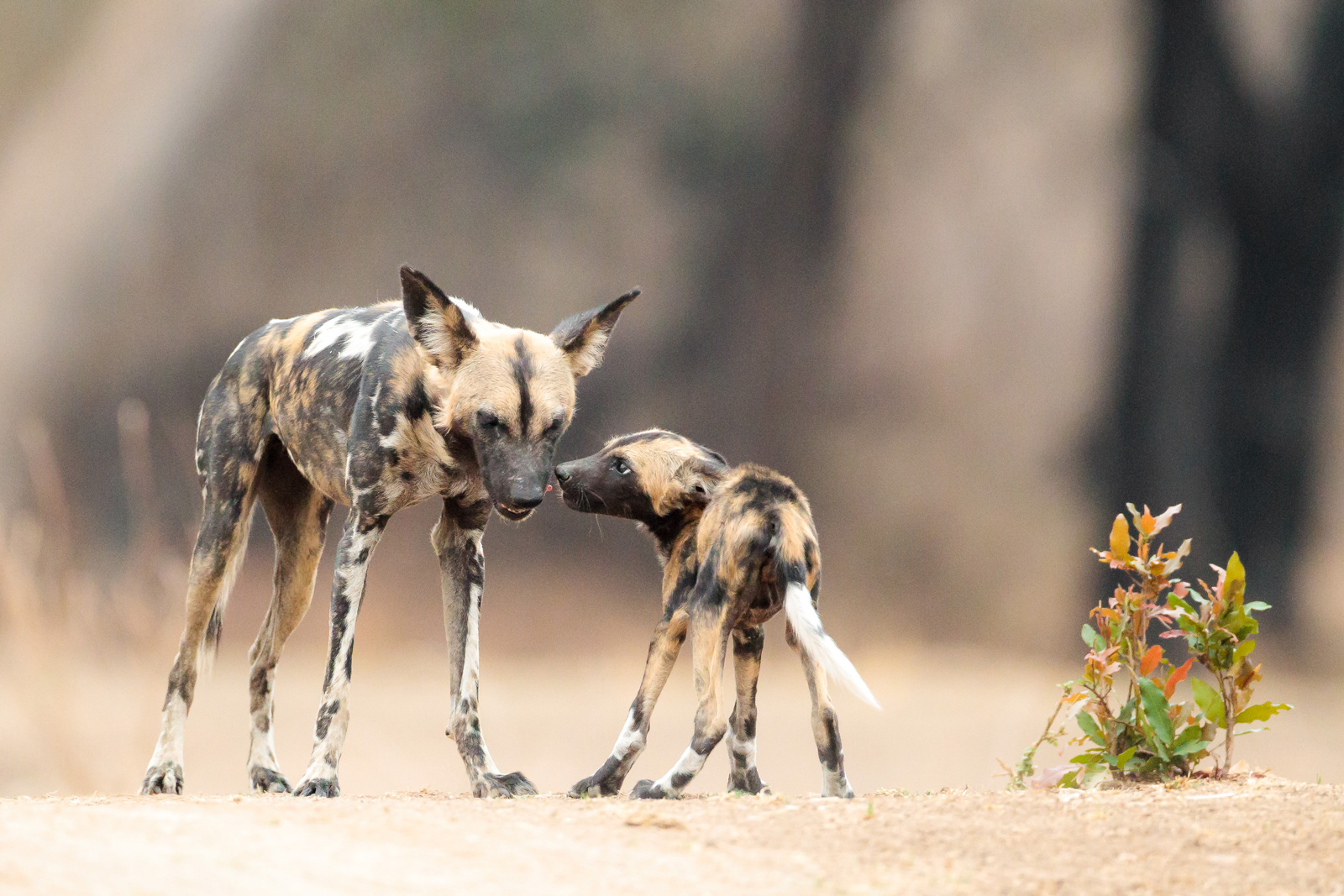 Life in the wild is not easy for dogs, particularly with increasing human pressures and threats such as snaring. The oldest recorded dog in the wild is 12 years old, making the Hot Springs Pack’s alpha male, Wild Dog 73, a remarkable story.

Wild Dog 73 has been an alpha male since 2008 when he was first documented and estimated at two years old. Having endured incredible odds, including a near-fatal snare (which was removed by ZCP, CSL and DNPW in 2014) – he is now entering his 11th year and has fathered dozens of wild dogs throughout his tenure in the Luangwa Valley. 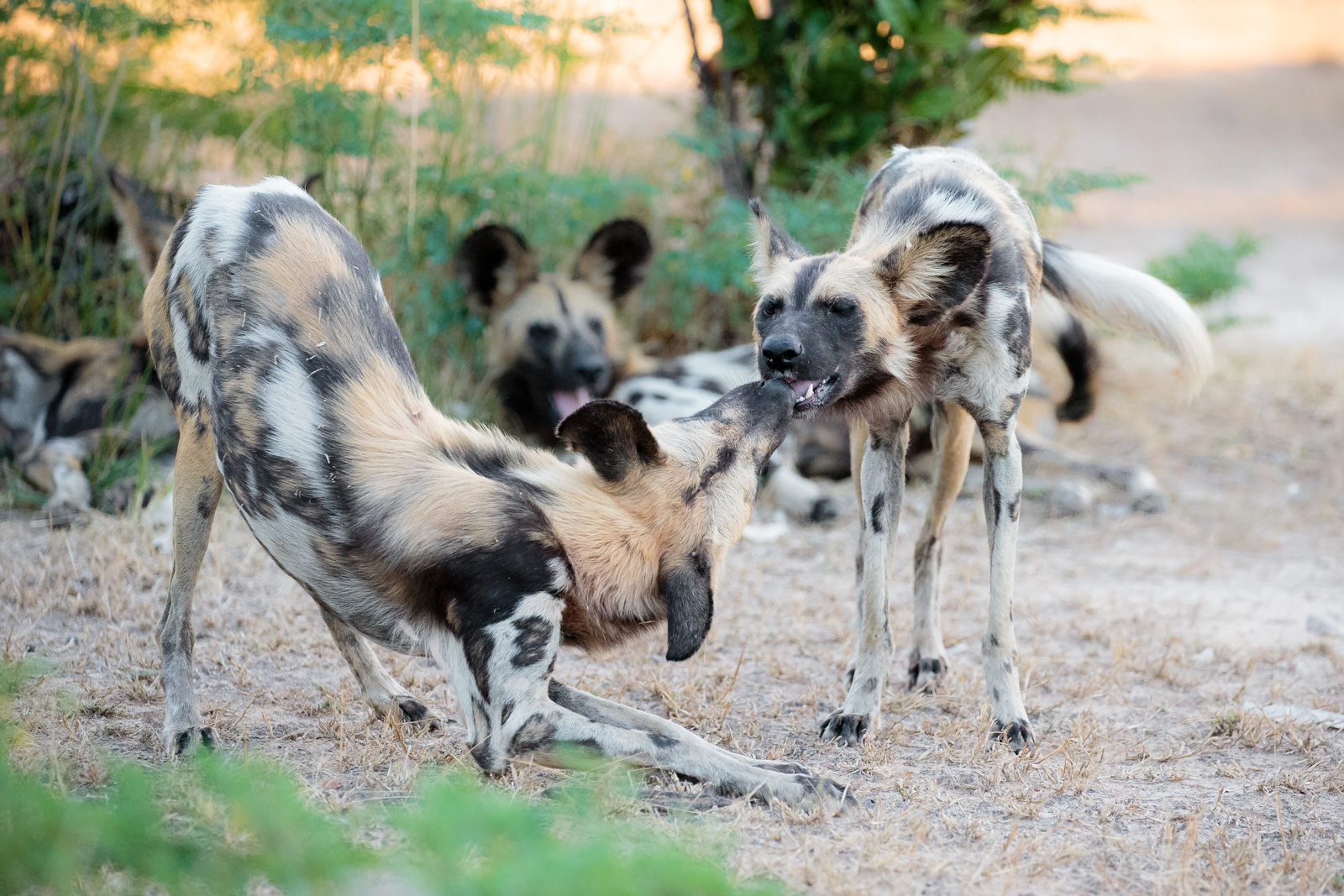 Wild dog packs typically have an alpha male and alpha female, which breed in the late rainy season. To form a pack, disperser dogs are required, and most subordinate dogs disperse from their natal pack in same-sex groups between the ages of one to three.

These dispersers range widely in search of other opposite-sex groups of dogs with which to form a pack – or, they can take over a particular pack if the numbers are right. Luangwa’s Kaingo pack, for example, has seen two takeovers by dispersing groups of females that have ousted the resident alpha females. 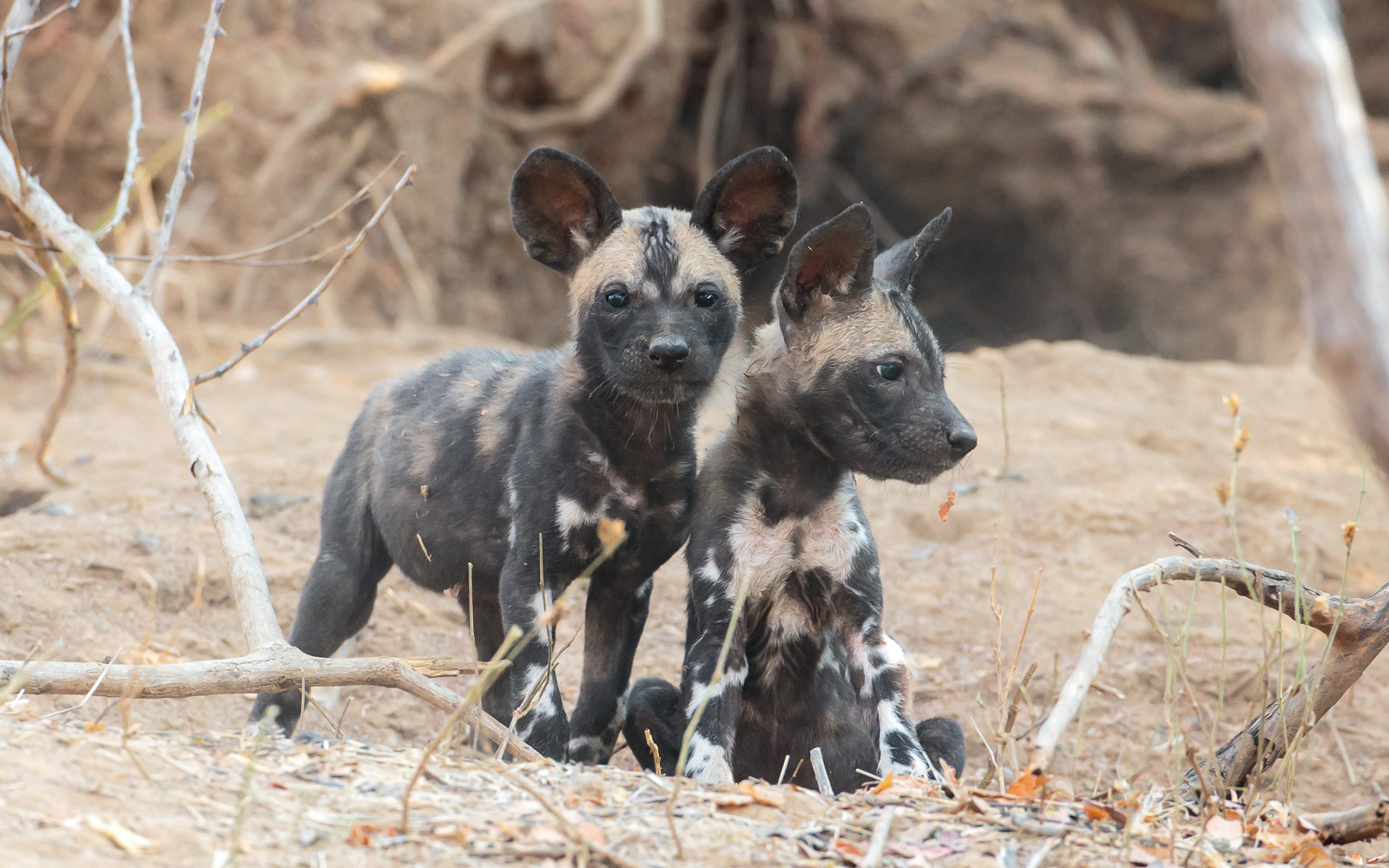 The answer likely lies in the theory of kin selection, which favours the reproductive success of an organism’s relatives. Most wild dogs in any given pack are related to some degree. Thus, pups raised by uncles and aunts still pick up on family traits, and being part of a cooperative unit facilitates that.

We are continuing to learn just how cooperative these packs are, and recent studies have indicated opposing effects of pack size on reproduction and survival, i.e. bigger packs can raise more pups, but the rate of survival of pups is lower in larger packs. This indicates that there is a reproductive cost to group living.

Further explained by kin selection:  “We’ve found that wild dogs are even more altruistic than was previously thought, keeping the pack’s pups safe and well-fed with a level of effort that compromises their survival,” said Montana State University professor and wild dog expert Dr Scott Creel, author of the study and a lead researcher on ZCP’s Luangwa wild dog work. 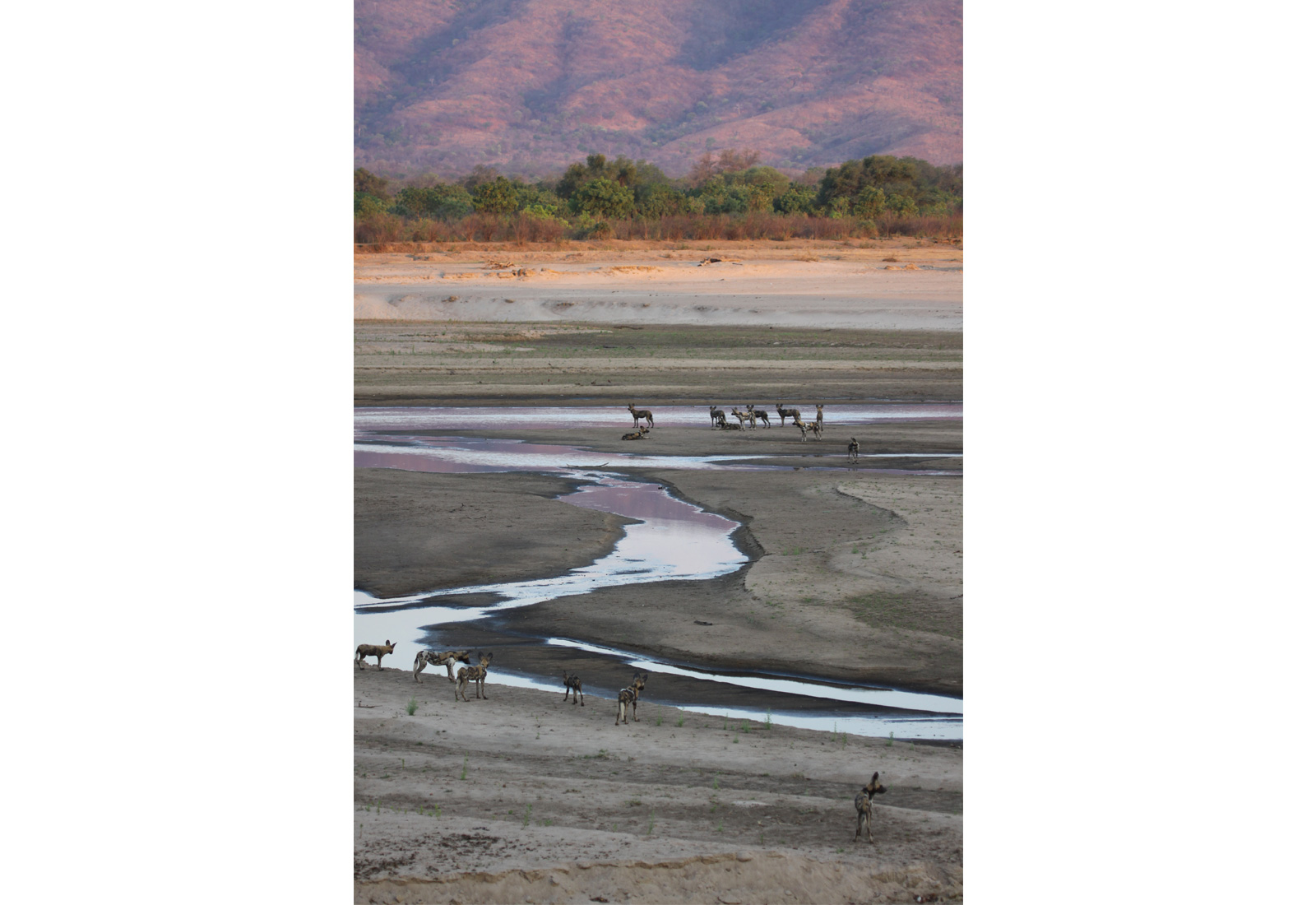 The resurgence of wild dogs in the Luangwa Valley and the impact of the collaborating organisations on the population is perhaps best illustrated by the Hot Springs pack. In 2014, approximately 10% of the ZCP study population of dogs was snared, and at one point, this particular pack had 60% of its dogs snared.

Working in collaboration, the ZCP, CSL and DNPW were able to desnare most of these dogs and the Hot Springs pack has survived to populate at least five more packs with disperser dogs, with even more dispersing out into areas throughout Eastern Zambia. 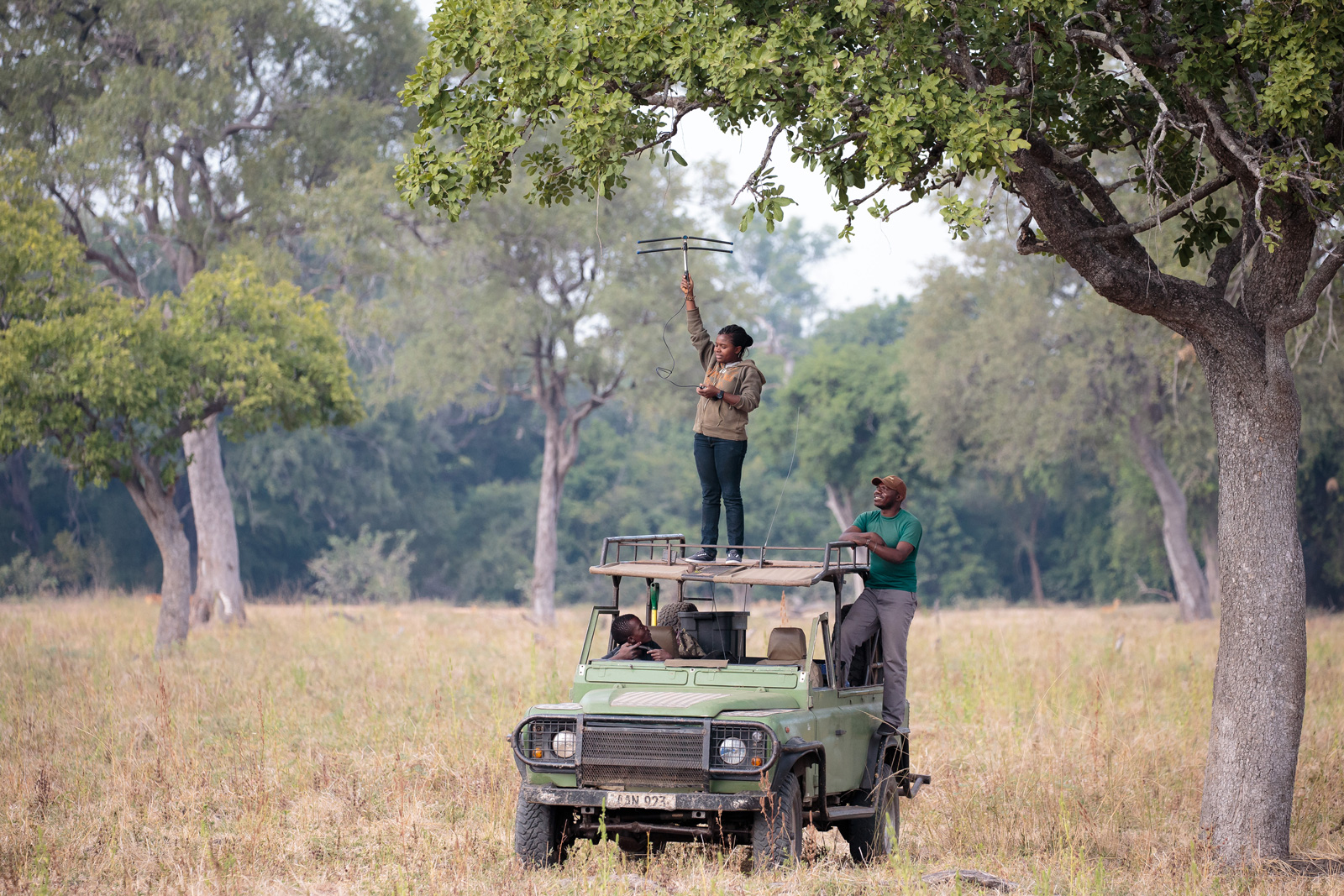 The Luangwa Valley supports Zambia’s largest wildlife-based economy, estimated to support a US$30 million annual economic turnover in the South Luangwa area. Growing up next to the country’s premier wildlife area, with many children supported by their parents’ employment in the safari industry, there are unique opportunities for aspiring wildlife conservationists. 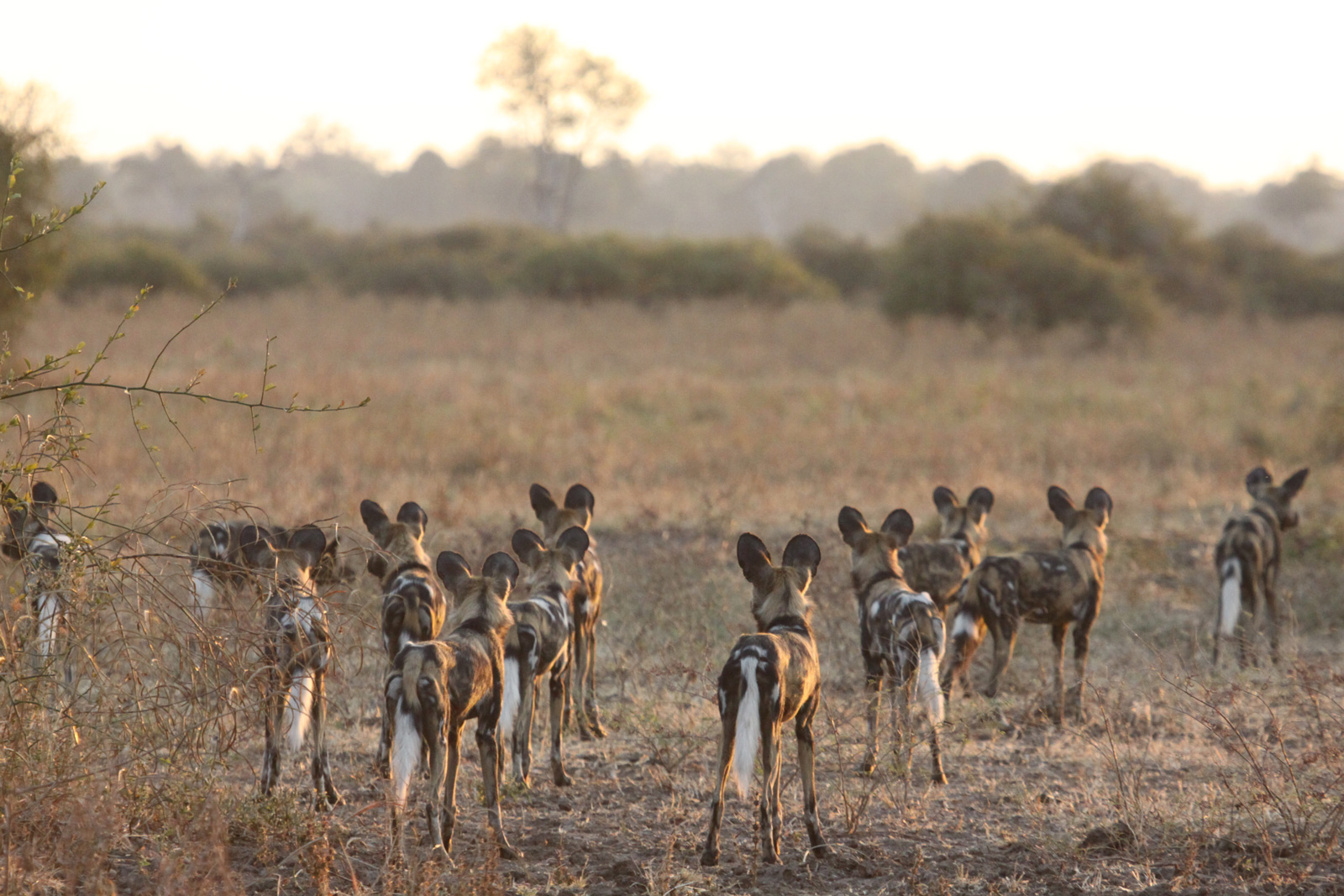 📷 There is good news for wild dogs, but efforts to conserve them must continue ©Zambian Carnivore Programme