Firstly the press release confuses weeks with days. But moving on from that, during the last 2 and a half months of 2012 there was a massive spurt in poaching – we were losing 2,8 rhino per DAY on average. In the first two months of 2013 we have lost 2 per DAY so far, on average. So in the past few months there has been a drop in rhinos poached per day, on average. Lets hope the trend continues…

The number of rhino poached in South Africa since January 1st, 2013, has increased to 102.

Four rhino were poached in the Kruger National Park in the past week and two at a game reserve close to Polokwane in Limpopo Province.

In the past 48 hours five alleged poachers were arrested in Limpopo and one in the Kruger National Park (KNP). This means that a total of 40 alleged poachers, among them three alleged couriers, have been arrested since the beginning of the year.

On the evening of 18 February one suspected poacher was arrested by rangers in the KNP. A rifle, silencer and ammunition were recovered.

Last night, the SANParks investigation unit, with the support of the South African Police Service, arrested five suspected rhino poachers in Limpopo who were believed to have been en route to the KNP.  They were found in possession of a hunting rifle, silencer and ammunition.

The Kruger National Park remains hardest hit by poaching, with 70 rhinos having been killed for their horns since January 1.  Eleven rhino have been poached in North West, 10 in KwaZulu-Natal, seven in Limpopo and four in Mpumalanga.

The slight drop in the number of rhino being killed per week may be attributed to the implementation of the turnaround strategy aimed at eliminating poaching by SANParks.

In 2012, South Africa was losing up to three rhino a week.  This year the number of rhino poached has decreased to 2 per week.

This is an indication that the turnaround strategy is starting to work. 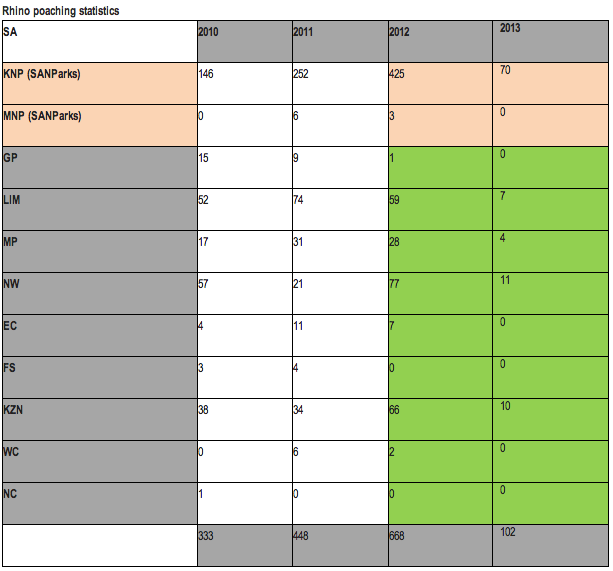 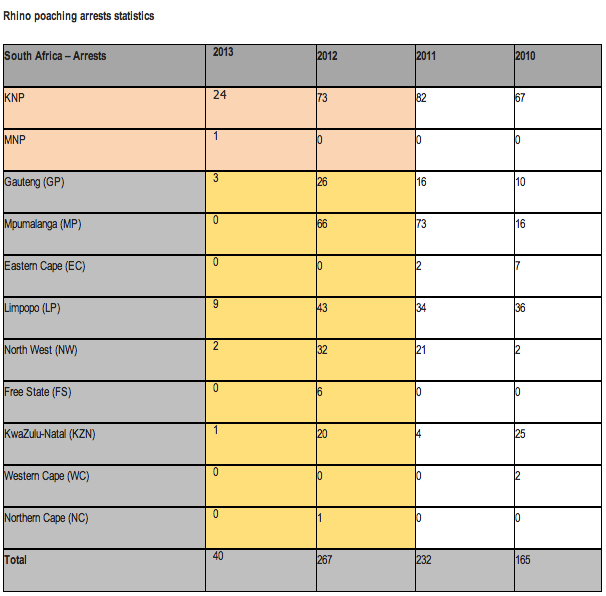