The Kgalagadi in summer

When the locals tell you that it’s going to be “cooler” in the next few days, and that the predicted temperature will be 38 degrees, not the usual 45 degrees, then you know it’s hot. When those denizens of the desert – the gemsbok – start moving into the shade of the camel thorn trees at 9am to spend the day out of the sun, then yip, it’s going to be a smoking hot day.

While everyone was driving south out of the Kgalagadi Transfrontier Park in middle of January, going back to work and heading back to school, I was driving north, into the heat.

I’ve only ever been here in winter time, during dry season, when day time temperatures are more reasonable, and night time temperatures can drop to below freezing. But summer in the semi-arid Kgalagadi seemed like a quintessential thing to do in Africa. And after a few days here, I’m very happy I came when I did. Not only are there far fewer visitors – so you often feel like you’re the only one in the park – there seems to be more “life” than in winter.

And that’s because of the one thing all creatures in the desert can’t do without: water. The skies are filled with thunder clouds and the recent sporadic storms have transformed the red dunes and dry river beds into green carpets. Everything has responded. The bird life, especially the raptors, is superb, insects are buzzing, the barking gekkkos are cacophonous, the springbok and gemsbok look fat, the lions fatter, and the whole place – the land, the sky, the smells, the sounds – has the same healthy glow, the same allure, the same reverence as that of a pregnant woman about to give birth. The power of life. 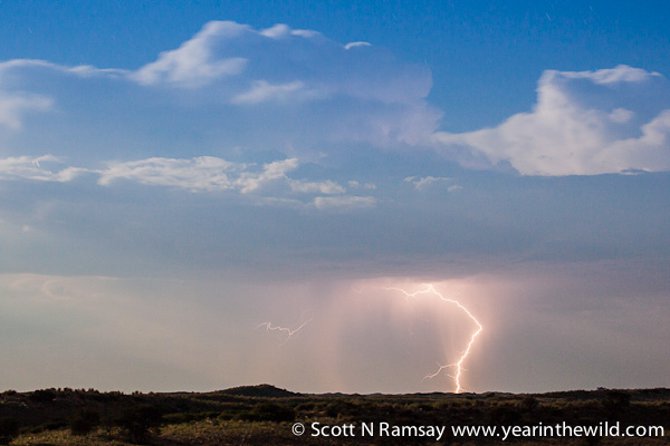 For my first few days I’ve been staying at the new Ta Shebube Lodge, on the Botswana side of the transfrontier park. It’s located just off the main road between Twee Rivieren and Nossob, near to the well-known Rooiputs camp site. (There’s another Ta Shebube lodge – also new – near Polentswa in the north). Perched on top of a dune, this semi-luxury, fully-catered lodge makes quite a change from the austerities of camping in the Kgalagadi. It’s simply beautiful, like it’s surroundings. Because it’s unfenced, like the campsite, lions and hyenas often walk through camp.

The lodge has managed to retain its sense of wilderness, and although there are some teething issues (the lodge is only 6 months old), I would recommend it to visitors who don’t want to camp, but still want to experience the essence of the Kgalagadi. But for me, the best thing about Ta Shebube at Rooiputs is its location: close to several water holes on the Nossob dry river bed that are known for attracting lions and hyenas.

And like Rooiputs camp site, the lodge gives access to these areas quickly and easily in the early morning, before the hordes of visitors from Twee Rivieren,  25 kilometres away, arrive. (This has become an issue in the Kgalagadi, when small traffic jams crowd predator sightings).

I went out on drives for several mornings with guide Kebonyemodisa Mosepele (“KB” for short). We left the lodge at 5:45am every morning, and were on the Nossob road by 6am, so often had the whole stretch of river bed to ourselves.

Our first two mornings were reasonably productive: fleeting glimpses of lions, brown hyena, spotted hyena, an old lioness that looked ill (probably a snake bite), a decent sighting of a young male cheetah and a great view of a martial eagle, and several sightings of black-chested and brown snake eagles.

On our last morning, things escalated. Perhaps because there was much more cloud cover, and cooler, there seemed to be more action. By 6:30am usually, the Kgalagadi summer sun is belting down, and animals are already heading into the shade.

We came across three prides of lions, a total of thirteen individuals. The first pride was the most spectacular; three lionesses, two black-maned males and two cubs lying right next to the road near Kij Kij water hole. Soon after arriving, the adults all started roaring around us. Incredible – check out this video which KB filmed!

We sat and watched the cubs play for a while, then the adults started moving south, and quickly, the cubs following. Lions can be very lazy, but when they’re on a mission, then watch out. We tracked them along the river bed for several kilometres, and on the way the leading lioness killed a Cape fox, which the cubs played with. 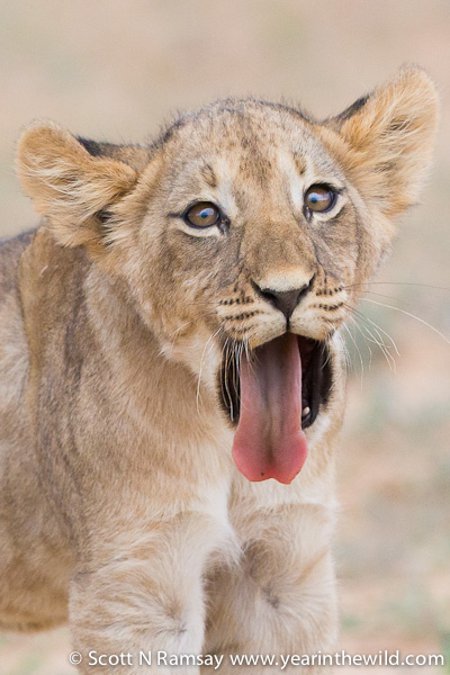 After an hour or so, the lions settled down some distance from the road and started snoozing. It was only then that another vehicle arrived, otherwise KB and I had the lions to ourselves for the first hour and a half. It’s encounters like these that make the Kgalagadi in summer so special.

Some important asides for visitors:

– The afternoon drives in summer seem to be less productive than the early morning drives, so head out early in the morning, when predators are more likely to be active. Unfortunately, you have to be back at your camp or lodge by 7:30pm in summer, which is sunset time, so it’s still too hot for predators to be up and about. And there are no guided night drives at Ta Shebube, which is a real shame, because there must be plenty of predator action after dark during summer. I’ve been told that the lodge is requesting permission for night drives from park authorities. It would do much to add to the experience of visitors during summer. (Visitors who stay at the South African national parks camps of Twee Rivieren, Mata Mata and Nossob can go on guided night drives).

– This is an issue for all visitors to Kgalagadi, but there are really only two main roads – along the dry river beds of the Nossob and Auob. Visitors to Ta Shebube who go on guided drives won’t see any more of the park than self-drive visitors. But KB is an excellent guide, and is certainly reason enough for visitors to spend a few nights at the lodge. His deep knowledge of the flora and fauna is impressive, having worked in the Okavango Delta for several years before coming to the Kgalagadi.

– The lodge and its thatched semi-luxury rooms have some fantastic views to the north over the dunes, but to the south you can see the Rooiputs campsite and staff housing (and the campsites can see the lodge). Also, the main access road to the lodge goes right past the staff housing. Not ideal for a “wilderness” experience, but so be it.

– Then, my gripe for the day. The staff housing is not built in an appropriate style, it should have been designed with the environment in mind. And because it has flat corrugated roofing and is located in a depression of the dunes, it must be extremely hot and uncomfortable for the staff to live and sleep there during summer. My thatched chalet on top of the dunes caught the daytime breeze, but was still uncomfortably hot during the day, so the staff housing must be almost unbearably hot.

However, despite the challenging conditions, the staff at Ta Shebube are fantastic, and overall the lodge offers a unique experience in the Kgalagadi… and is well worth a visit.