The climb for anti-poaching dogs

Posted on May 8, 2017 by Team Africa Geographic

Grant has 15 years of hiking and bush experience, gained in part from being a SANParks Honorary Ranger since 2012. Ian is a qualified guide with 35 years of hiking experience in the Drakensberg, and Jeffery has worked as his assistant for 13 years and has lived his whole life in the tribally owned Mnweni valley in the ‘berg’. They will traverse the mountain range unassisted, with only one resupply at the Sani Pass. 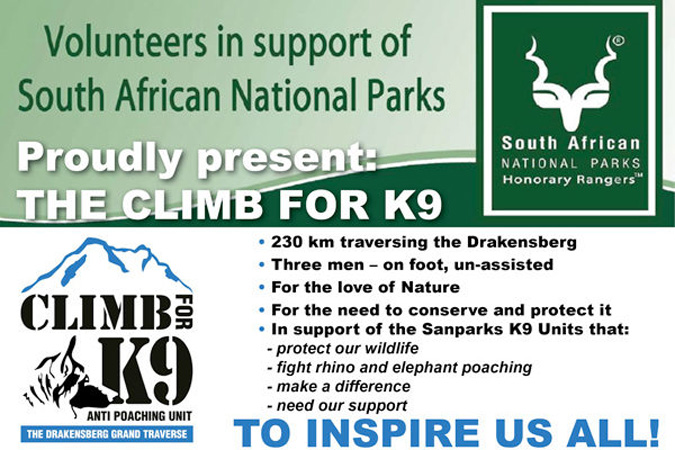 The Drakensberg Grand Traverse is a 230 km hike along the escarpment of the pristine and remote Drakensberg Mountain Range that shares a border with Lesotho. The hike has no predetermined routes or even trails, but requires the ascent of at least five of the spectacular ridges and summits along the way.

Grant, Ian and Jeffery will set off for the chain ladders from the Phuthaditjhaba (Witsieshoek) Sentinel car park in Free State on 25 May at 9 am. The route takes them over the 3000m+ peaks of Mont Aux Sources, Champagne Castle and Mafadi – the highest peak in South Africa – and Giant’s Castle, before they descent through Thamathu Pass to Boesman’s Nek Hotel near Underberg.

The Drakensberg is vitally important as one of the main water catchment areas that feed KZN rivers and the Orange River system in South Africa. We need to look after this mountain range to protect our water source and the wildlife that lives there.

Wildlife is under threat all over South Africa. We are hiking to raise awareness about the plight of our rhino and elephant populations, and all the other animals killed by poachers in our national parks – and to demonstrate what can be done to counter this threat: SANParks are fighting back with the support of the SANParks Honorary Rangers. 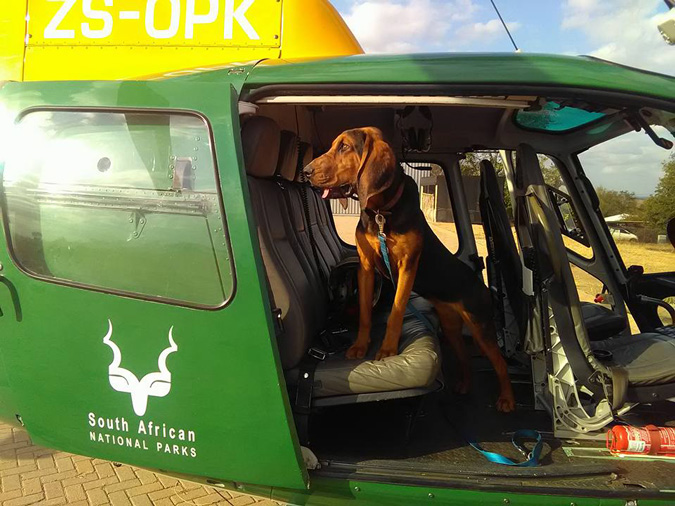 Fifty-two dogs and their handlers are on duty in the Kruger National Park right now. The K9 Units are deployed by helicopters, vehicles, and on foot, to patrol our national parks and deter, track down and help arrest poachers to protect our wildlife. They work in remote and pristine areas, often unassisted – just as we will be on our hike.

The Climb for K9 is supported by the SANParks Honorary Rangers, KZN Region. We hope to spur your interest in the protection and conservation of our precious wildlife heritage, and to raise funds for the continued upkeep and training of the SANParks K9 Units.

Please get involved; we can all do something:

♦ Meet the K9s at the Kruger K9 Centre

Help the expedition become a success:

♦ Contact Grant at  if you can contribute equipment, supplies or assistance to the Climb for K9

♦ Contribute to the upkeep of the K9 Units in the Kruger National Park by donating. All sponsors will be acknowledged for their contributions. All proceeds from this event will be used to support the SANParks Project Watchdog; the overall campaign for the SANParks K9 units. Thank you for your support!