Vietnamese ambassadors, including musicians Quoc Trung, Do Bao, producer-MC Anh Tuan, actresses Hong Anh and Minh Trang, MC Phan Anh, Miss Vietnam Thu Thuy, and singers Duc Tuan and Le Cat Trong Ly, were at the Sheraton Hanoi Hotel at the Stop Using Rhino Horn campaign launch to raise awareness of the rhino horn crisis and urge people to stop consuming this product because “when the buying stops, the killing can too”.

The campaign strategy raises awareness through communications. Many Vietnamese TV, radio stations, news, and out-of-home media agencies committed to support the campaign, providing over US$1 million in donated media for the upcoming year, to broadcast the campaign’s TV messages and print ads featuring the ambassadors calling for immediate shifts in belief and action to protect the threatened rhino.

In his keynote speech at the launch, vice minister of the Ministry of Information and Communications, Dr. Truong Minh Tuan, clearly stated: “We are committed to support this meaningful campaign by using our communication channels to change behaviors and educate the public on laws related to endangered species, and join with international communities in saving these species for an ecologically balanced Earth.”

The Stop Using Rhino Horn campaign focuses on the world’s two largest markets for consuming rhino horn: Vietnam and China. WildAid Executive Director, Peter Knights stated, “Although 90% plus of ‘rhino horn’ sold in Vietnam is actually buffalo horn or other fakes, even a small amount of use of the real thing can threaten rhinos with extinction, while not helping people’s health. People need to understand the horror of the problem they create with this superstition.”

“In 2011, the Javan rhino in Vietnam was officially declared extinct after the country’s last remaining rhino was killed by poachers and its horn taken,” said African Wildlife Foundation CEO, Dr. Patrick Bergin. “We need the people of Vietnam to ensure Africa’s rhinos don’t suffer the same fate as Vietnam’s rhinos by saying no to rhino horn before it’s too late.” 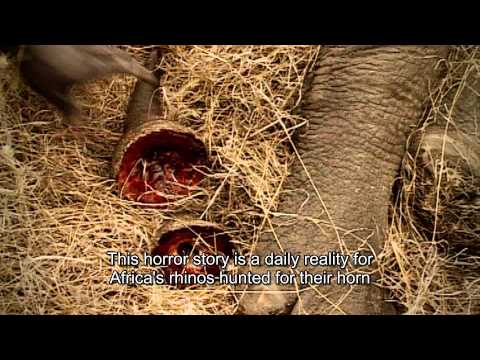 “Rhino horn is keratin, the protein in human fingernails and hair. There is no evidence it cures disease or help ailments. These false beliefs are causing the ‘massacre’ of rhinos around the world. If you buy only a small piece of rhino horn, you pay for the killing of an innocent, majestic wild animal,” said Mrs. Hoang Thi Minh Hong, Director of CHANGE.

In the coming years, the campaign coordinators will partner extensively with the media as well as conduct attitudinal surveys, organise public events and education programs, and build local authorities’ capacity, to help strengthen the campaign to achieve the desired outcomes.

Please visit www.wildaid.org/rhinos or www.awf.org/sayno to join efforts to protect the rhino from the threat of extinction.