In July 2017, the London-based Environmental Investigation Agency (EIA) released their report, The Shuidong Connection, detailing their almost three-year undercover investigation into the illegal ivory smuggling trade between China and Africa. 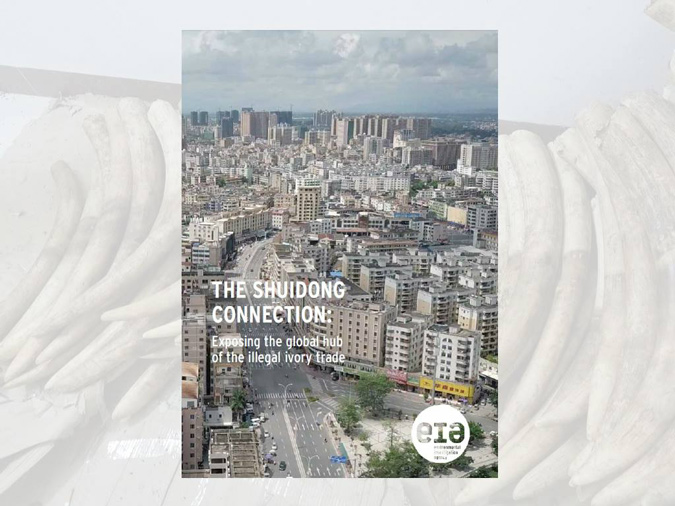 The lack of enforcement on illegal ivory smugglers

One of the main concerns the EIA had was that even though China has taken steps to close their domestic ivory market by the end of 2017, there is still a complete lack of enforcement against Chinese nationals who are involved in the illegal ivory trade.

These smugglers are still operating seemingly without risk of punishment, and the EIA managed to gain undercover access to one of the many crime syndicates operating in China by posing as interested ivory buyers, gaining their trust and then revealing in their report how exactly the smugglers go about moving ivory from Africa to the Far East.

The largest hub for ivory trafficking is based in Shuidong, a small remote town in the southern province of Guangdong, China. Here you will find Chinese-led criminal syndicates that the authorities have yet to apprehend.

Apart from smuggling ivory, they are also involved in trading in pangolins (African and Asian), rhino horn from Africa, totoaba (fish swim bladders), and previously in sea cucumbers from Tanzania (sought out for their high protein content and supposed health benefits).

At the time of the investigation in 2016, the EIA gained valuable information into how one particular crime syndicate ran their illegal smuggling operations from Mozambique and Shuidong.

How to smuggle ivory from Africa to China

The EIA gained insight into how the Shuidong syndicate smuggled the ivory out of Mozambique, these methods included:

♦ Making contact with locals who have connections with the local elephant poachers.

♦ Requesting ivory that is poached in southern Tanzania and northern Mozambique where the law is weak – unlike in Botswana which is not targeting by this group due to a relatively good governance.

♦ Inspecting the ivory and discarding those which are of poor quality or too small (these are mainly tusks from young elephants).

♦ Preparing the ivory by packing them into 40-foot shipping containers, which are then filled with items to conceal the ivory, such as seashells, tea leaves, or grey plastic pellets (used to make plastic buckets).

♦ Using bribed agents along the route to China to assist in the operation – these include people such as corrupt rangers, customs officers, shipping agents, and lawyers.

Moving to Nigeria for ‘yellow’ ivory

The report also focuses on the smuggling group’s plan to move their operations from Mozambique to Nigeria, reasons for this move included:

♦ Even weaker security measures in Nigeria when compared to Mozambique,

♦ And a larger profit is gained from poaching ‘yellow’ ivory sourced from forest elephants in West and Central Africa, compared to the ‘white’ ivory from savannah elephants in East Africa.

The EIA calls for further investigation and prosecution of the Shuidong syndicate and the report includes suggestions for specific policies and enforcements that should be implemented to crack down on these criminal smuggling syndicates.

Their detailed report of their investigation and findings can be found here: The Shuidong Connection: Exposing the global hub of the illegal ivory trade.