The sardine run has been likened to the great wildebeest migration across the Maasai Mara and Serengeti. A geographic wonder and a spectacular marine event dubbed ‘the greatest shoal on earth’.

Sardines are winter’s gift to Durban; every year at some point between May and July, locals anticipate the glittering deep-sea wave as it rolls up the east coast of South Africa, and enters the warm waters of KwaZulu-Natal. 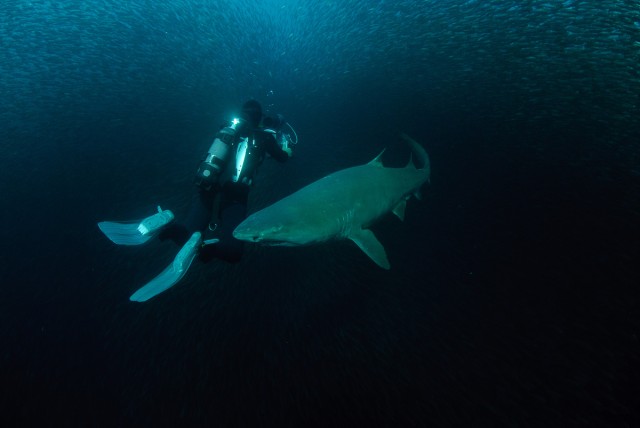 By rule, sardines are cold-water fish and belong in the ocean lapping the hook of Africa. This is where the cool Benguela current nourishes their survival and why there are bait and bokkom (Afrikaans for salted dried fish, a traditional delicacy popular on the west coast of South Africa and often enjoyed with bread and apricot jam) factories dotted along the coastline. During the winter months, cold fronts and heavy seas feed a pulsing upwelling of the warm Agulhas current, enabling a cool band of water to flow inshore and leak millions of sardines up the coast.

Following the run in hot pursuit is a teaming swarm of hungry predators – sharks, dolphins, gannets and game fish are among the contenders vying for a sardine meal. They too travel in abundance and from far afield. Resident pods of common dolphins multiply into thousands, cape fur seals leave colonies from further down the coast and brooding ragged-tooth sharks venture out of southern pole waters to breed.

Photos © Roger Horrocks, www.rogerhorrocks.com. Roger Horrocks is a photographer and underwater cameraman based in Cape Town South Africa. In 2007/2008, Roger worked as an underwater photographer on the BBC Nature’s Great Events series, which documented the annual sardine run off the east coast of South Africa. The film, “The Great Tide”, won the Golden Palm award at the 2009 Antibes Underwater Film festival.

Where: South Africa’s east coast, from Cape Agulhas to Durban.

When: Every year between May and July (exact timing is unpredictable)

I’m Holly - born and raised in the rural British Counties, my mother began life on a sugar farm in Zululand. After reading Anthropology at university in London, working for a political activist filmmaker in India, and doing a short stint under the bright lights of Bollywood – I decided it was time to return to the motherland. To earn a crust in the name of wanderlust, I finished up a post grad in media and hotfooted around South Africa as a freelance travel journalist.