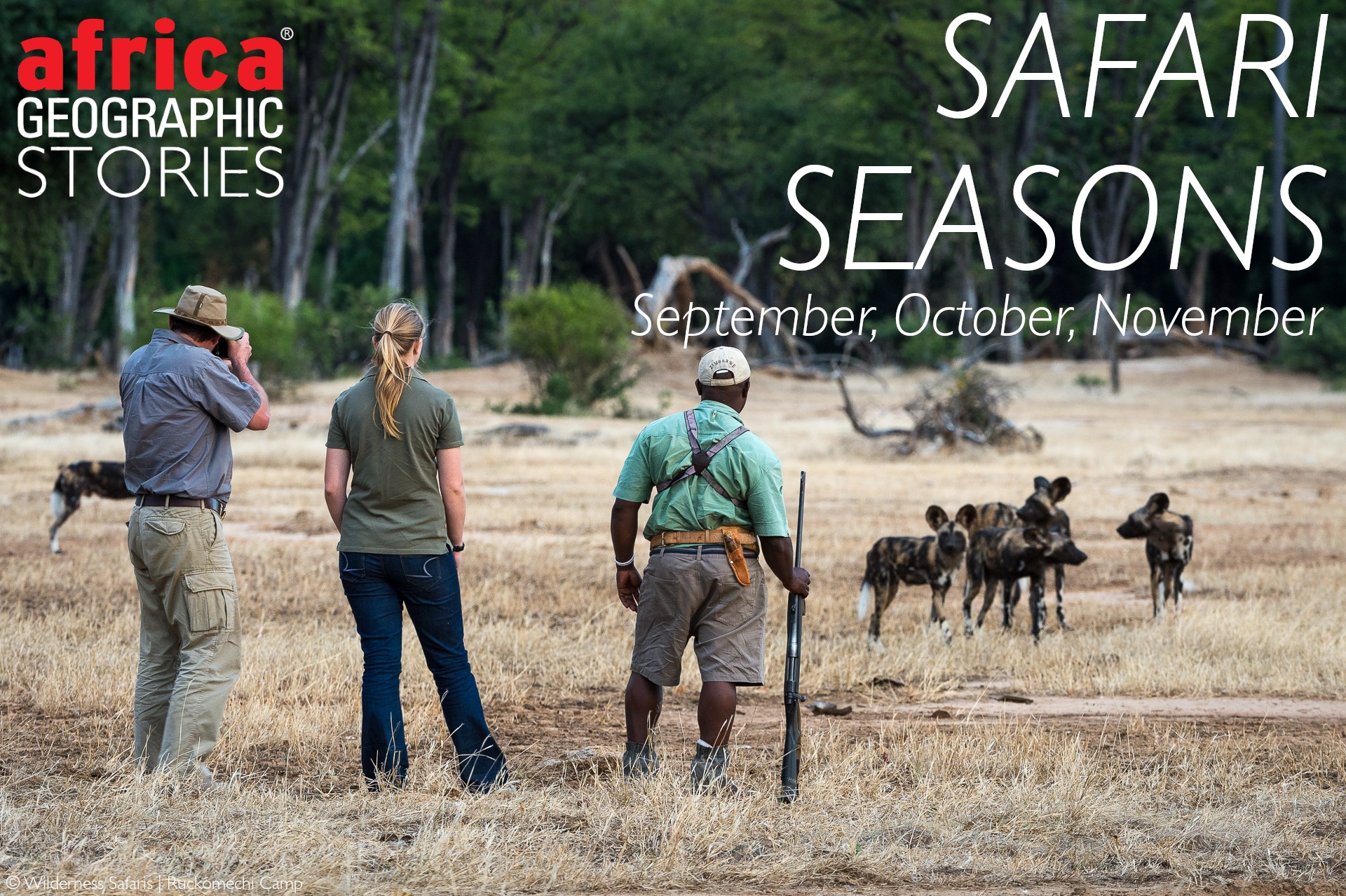 ‘When is the best time to come on safari?’ This is a very good question, but, like most good questions, it doesn’t have a simple answer. Africa is a vast continent straddling the equator, boasting six time zones. The upshot of this is a vast area of profoundly differing vegetation, climates, topography and animal life that occupies the myriad niches provided by these variations. The good news is that there is always a good safari season in Africa. You just need to be aware of what you want to see and where you’d like to see it – then the ‘when’ becomes pretty simple.

It’s blazing hot in the south but the game viewing is spectacular with a landscape of gold, copper, grey and bronze. The vegetation is sparse and the animals must concentrate at the remaining water. The Great Migration is thinking about leaving the Mara and heading into the Serengeti. Primate trekking is wet but possible with occasional discounts. The Horn of Africa is cool and magical while this is an excellent time to visit the Indian Ocean islands.

Spring in the south is possibly not what you’d expect. In South Africa’s Western Cape, it is still wet and windy for September and probably October. In November, you could have a very special time as the winelands transition from winter to spring. Up the Garden Route, you’ll also have a crowd-free experience before the holiday season with empty, endless beaches and odd-ball wine farms. It’s the end of the whale-watching season in Hermanus.

For safari-goers, this is a fascinating time in Southern Africa. As far as animal viewing goes, this is probably the best time of year to visit. It is the height of the dry season, and animals must concentrate around the few remaining water sources. For the birders, each day brings the arrival of a new migratory avian traveller – here to breed for the season or simply enjoy summer’s hospitality.

That said, beware – the ambient temperatures become very hot, very quickly. There is seldom rain and the vegetation is sparse. The trees can remain leafless deep into this period and grass will not flush until the first good rains, which normally come in November (although relieving showers before then are possible.) Latterly, you’ll see the thunderheads forming in the afternoons and, if you’re really lucky you’ll experience that unbelievable feeling as the first rains fall on a parched land – nature’s collective sigh of relief will still you completely.

In the Greater Kruger area of South Africa, the spring safari season arrives like a blast furnace. As herbivores come to drink, predators lie in wait close by. The vegetation is at its sparsest – there are no leaves on the trees, the grass is cropped short. Dust turns the dusk and dawn carmine and peach. The downside for some is that the woodland areas can look harsh – but there is a subtle beauty in the dry copper, bronze and gold that makes for stunning photography.

The Kgalagadi Transfrontier Park and Kalahari destinations are very hot (much human hydration required) but with astounding scenes at the waterholes – jackals and falcons bombing in to grab thirsty doves and sandgrouse. The same applies to Makgadikgadi National Park in Botswana where the vast dry pans with their islands of ghostly baobabs are accessible to vehicles and even horses. Game viewing on the Boteti River is particularly good in the dry season.

In Namibia, this is when you’ll find the iconic scenes of springbok, elephant, zebra and eager predators coming down to quench their thirst at Etosha National Park’s waterholes. The Skeleton Coast, cooled by the Atlantic, is a beautiful respite from the heat before taking in the stark majesty of dry safari season Sossusvlei (not that it’s ever exactly wet in the Namib Desert).

In Zimbabwe, Mana Pools National Park and Hwange National Park are hot and parched during this period but the game viewing is utterly phenomenal so if you can stand the heat, they’re brilliant options with Victoria Falls still boasting good water until October, after which the levels drop off.

This is a great time of year to visit Malawi, especially in September and October before the rains. It’s warming up in the Nyika Plateau while the lakeshore and islands will be hot and Liwonde National Park offers fantastic, dry-season game viewing.

September and October are great months to visit Tanzania – Selous Game Reserve, Ruaha National Park, Tarangire National Park and many other national parks. The weather is dry and the vegetation relatively sparse. Towards December, these areas will become progressively hotter and wetter as East Africa heads into the short rains. December is generally rather too warm and wet but Ngorongoro Crater has a year-round superb safari season.

The wildebeest herds of the Great Migration are normally around the southern Maasai Mara National Reserve and northern Serengeti National Park in September and will slowly begin moving down the eastern edge of the Serengeti. September is also a great time to visit Laikipia Conservancy and Tsavo National Parks before the start of the short rains.

Uganda is starting to get wet during this period but there is still good game viewing in Murchison Falls National Park and chimpanzee trekking in Queen Elizabeth National Park – but don’t leave it too late. Bwindi Impenetrable National Park is not ideal for gorillas at this time of year because of the rain, mist and slippery conditions.

Gorillas, chimps and safari in Rwanda (Volcanoes National Park, Akagera National Park) are excellent during this period although it will get wetter towards December. This can be a good time to pick up discounts if you are prepared to deal with the wet weather.

It’s the busy season in the Bale Moutain National Park and Simien Mountains of Ethiopia with cool weather and clear skies – a great time to seek out the Ethiopian wolf, geladas and some of the 860 birds on the country’s bird list.

All the Indian Ocean Islands are great during this period. There are whale sharks off Mozambique’s Bazaruto and the Quirimbas and exceptional visibility for divers in Seychelles. Zanzibar is also lovely but the east African short rains can affect a December visit. 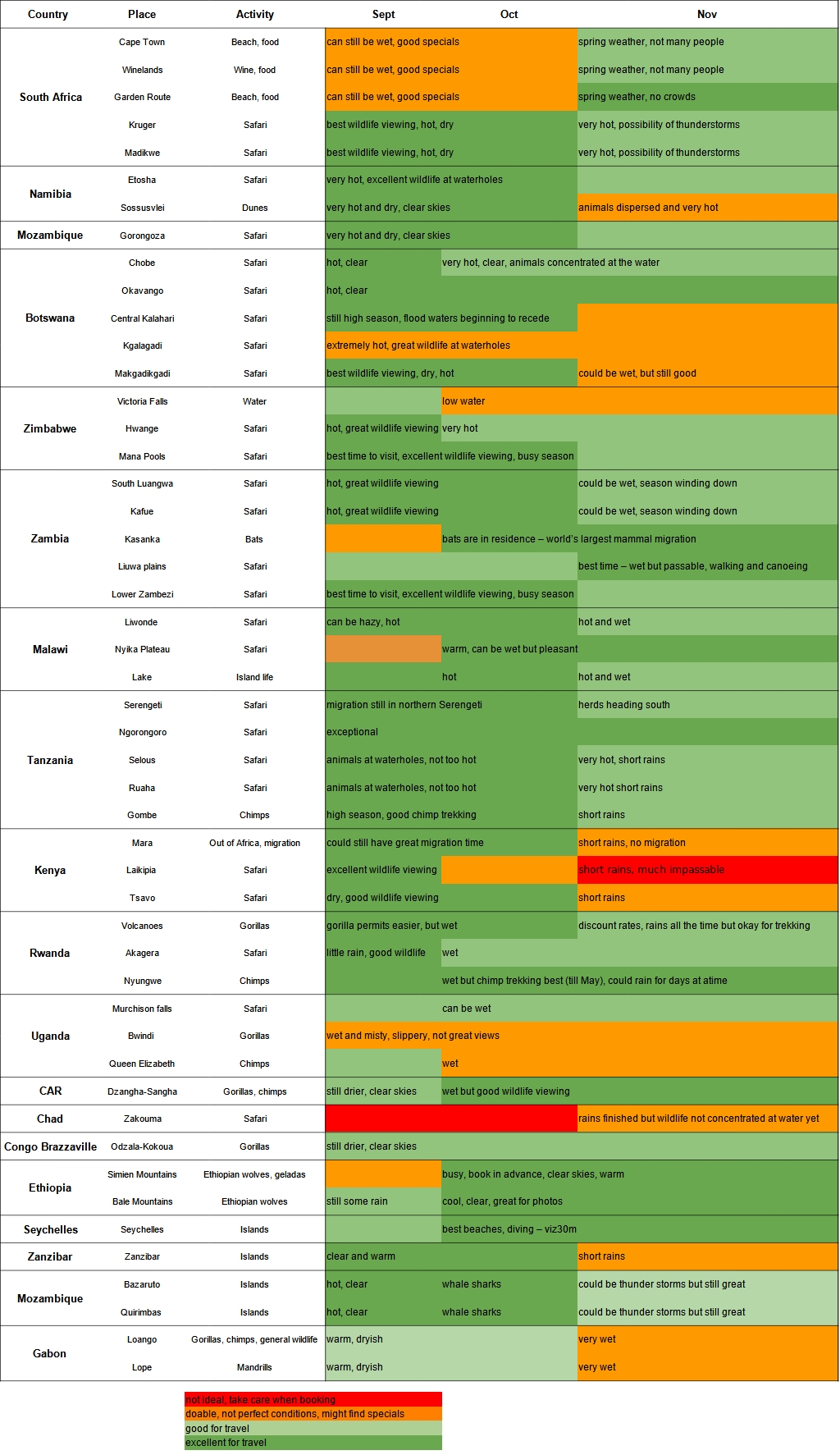 March, April and May