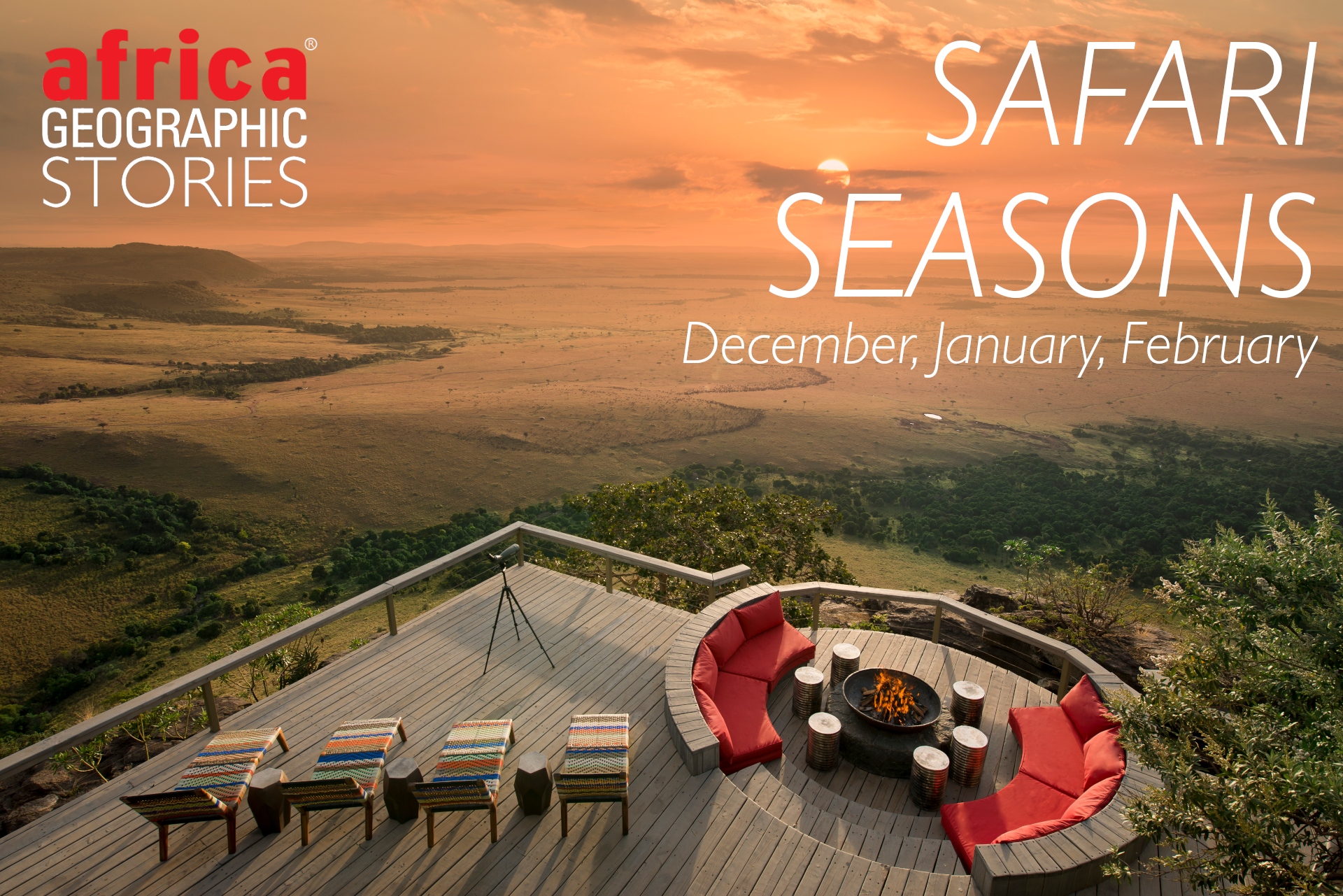 ‘When is the best time to come on safari?’ This is a very good question, but, like most good questions, it doesn’t have a simple answer. Africa is a vast continent straddling the equator, boasting six time zones. The upshot of this is a vast area of profoundly differing vegetation, climates, topography and animal life that occupies the myriad niches provided by these variations. The good news is that there is always a good safari season in Africa. You just need to be aware of what you want to see and where you’d like to see it – then the ‘when’ becomes pretty simple.

It’s summer in the south – the migratory birds are in residence, many of them singing their little pharynxes off, attracting mates and building nests. There are baby herbivores all over the place and predators following them. It’s also hot and there is a good chance of rain but an afternoon thunderstorm is the perfect way to end a hot African day. Make sure to bring wet weather gear and take care of malaria areas. Much of East Africa is experiencing the low tourist, secret season so there are parts of this region, Uganda and Ethiopia particularly, that are magnificent around now.

In general, it is lush, verdant and potentially wet. An exception is South Africa’s Western Cape and Garden Route which boasts a Mediterranean climate.  Once the Christmas season crowds have dispersed, Cape Town, the winelands and the Garden Route are stunning. If you come in December, expect a festive jamboree all the way up the coast.  Later on, you can expect to enjoy some of the world’s best beaches, quaint seaside towns and glorious scenery with a few locals and other intrepid travellers. The winelands shimmer in the heat and there is nothing quite like sipping a crisp sauvignon blanc as the sun disappears over the rugged, vine-strung valleys.

For the safari-goer, South Africa doesn’t have a poor season to visit. That said, each season has its special charms. During this period, the bush is lush, full of exuberantly breeding birds and baby herbivores. It is also hot and the chances of rain are high (normally in the afternoons). The Greater Kruger region, especially the private lodges on the western fringes, offer good value at this time of year, while Madikwe Game Reserve is an excellent, malaria-free option.

A visit to the Kgalagadi Transfrontier Park or any Kalahari destination is likely to be blisteringly hot but, at the same time, full of exuberant life making the best of the rare wet. Deception Valley in Botswana’s Central Kalahari Game Reserve is wonderful at this time of the year but take care of the mud – especially if you are self-driving.

Namibia can also be blistering and it is not the best time to visit Etosha National Park given that the animals are dispersed because of the rains. Sossusvlei can be fascinating at this time of the year – wet with a great sprouting of life that comes with rare moisture in the desert.

Botswana’s Okavango Delta can offer up some good dry safari season discounts but there are no floodwaters, so few lodges can offer water activities. Savute Game Reserve, Chobe National Park and Moremi Game Reserve are attractive because there will be fewer people and many birds but, you’ll find thick bush, a good chance of rain and dispersed animals. It is scenically stunning, however. If you’re of an adventurous disposition and fancy some self-driving, then you need to be careful of getting stuck and should probably plan to travel in convoy with at least one other vehicle. Some areas may be inaccessible if there is very high rainfall.

In Zimbabwe, some lodges will be closed for the wet season (Mana Pools National Park specifically). Victoria Falls is good at this time of the year but if you wish to fling yourself over the rapids in a raft (very popular!), the mighty Zambezi River is normally too high.

Into East Africa, there are great spots to visit at this time of year because most places are crowd-free. Most of Tanzania is very hot but there are great birds if that’s your bag. Wildlife viewing will never be bad and if you can handle the heat, then you could find some good discounts. The height of the Ngorongoro Crater rim and resultant mild temperatures makes the Ngorongoro Conservation Area a great Tanzanian destination year-round.

The absolute highlight of this safari season is the birthing of the wildebeest on the southern plains of the Serengeti National Park – up to 500 000 calves are born in February. It is a sight (and sound and smell) to behold. Read more about the Great Migration here.

In December you could hit the short rainy season so best to delay into January and February. Kenya is generally cooler than Tanzania and there are fewer tourists over this period.  The Maasai Mara National Reserve is a magnificent spot at any time of year and this is the secret season – you could have this magical wilderness almost to yourself with herds of elephants everywhere and predators galore.

For something slightly more unusual, a trip to Ethiopia to visit the Simien Mountains or the Bale Mountains National Park in search of the Ethiopian wolf is great at this time of year. You will also see the world’s only purely herbivorous monkey – the gelada – in the Simien Mountains.

As you head towards central Africa, the landscape can become inundated with floodwater. That said, for the birders, this is the best safari season. Many of the Zambian lodges are closed until the dry season but there are areas of Malawi still accessible and the Nyika Plateau is best at this time of the year. You might even find some low-season discounts in Zambia and Malawi.

For the uber-adventurous, parts of Central Africa north of the equator are becoming more and more accessible to tourists. Zakouma National Park in Chad offers good (and unusual) wildlife viewing on foot and from vehicles during this safari season.

The Indian Ocean islands of the Seychelles, Zanzibar and the Bazaruto and Quirimbas archipelagos can be rainy and hot at this time of year. If you’re desperate for an island retreat, Zanzibar is probably the best option, with good conditions for scuba diving.