SA film wins award ahead of world premiere at US festival

Posted on August 2, 2018 by STROOP in the News Desk post series. 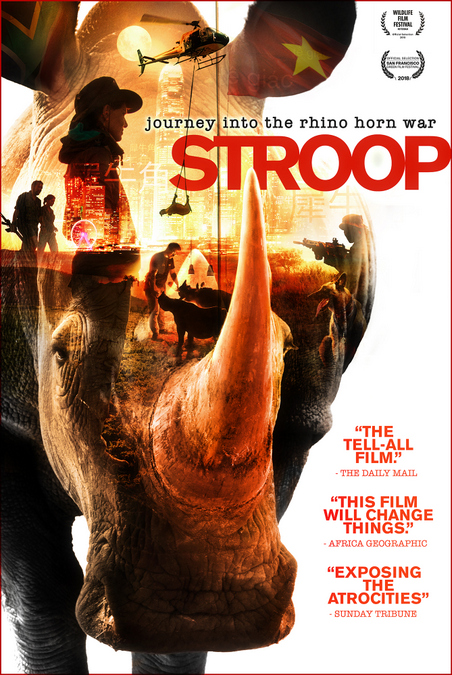 STROOP – Journey into the Rhino Horn War, the locally made documentary film, has been awarded the 2018 Green Tenacity Award by the judges of the Eighth Annual San Francisco Green Film Festival. This comes ahead of the film’s world premiere at the festival which will run from Thursday September 6 through to Friday, September 14.

What makes the win and the premiere all the more impressive is the fact that the festival organisers received 350 submissions but ultimately only 26 films were selected to screen and, of those, only five have received awards.

Says a delighted Bonné de Bod, who produces and fronts the film: “We are over the moon at receiving this prestigious award and it makes all our hard work and dedication to this film that much more worthwhile.

“Hopefully, it also means that the recognition will create additional awareness and encourage even more people to see the film when it releases.”

According to the festival’s criteria, the Green Tenacity Award is given to filmmakers “who show great tenacity in exploring crucial environmental issues in their work”.

STROOP – Journey into the Rhino Horn War tells the shocking and touching story of the ongoing poaching of the rhinoceros and the trade in its coveted horn. Four years in the making, this labour of love saw de Bod and director Susan Scott sell their houses, leave their jobs and move in with their mothers in order to document what is happening in the fight to save the rhino from extinction. Initially setting out on a six-month project it became a dangerous and intense expedition for which the passionate duo often found themselves in immense danger. In an exclusive first, de Bod and Scott filmed special ranger units inside the world famous Kruger National Park and at the home of the white rhino, the Hluhluwe iMfolozi Park and travelled undercover to the dangerous back rooms of wildlife traffickers and dealers in China and Vietnam. The result is a hard-hitting – and ultimately moving – documentary that challenges and shocks viewers.

Through unprecedented footage, Scott and de Bod have created a stunning, independent film – made with crowdfunding and grants – that shows why this hunted and targeted species deserves to live in dignity, free from exploitation by illegal traders, poachers, money men and corrupt governments.

STROOP – Journey into the Rhino Horn War will premiere in South Africa in February 2019 after its film festival run overseas.