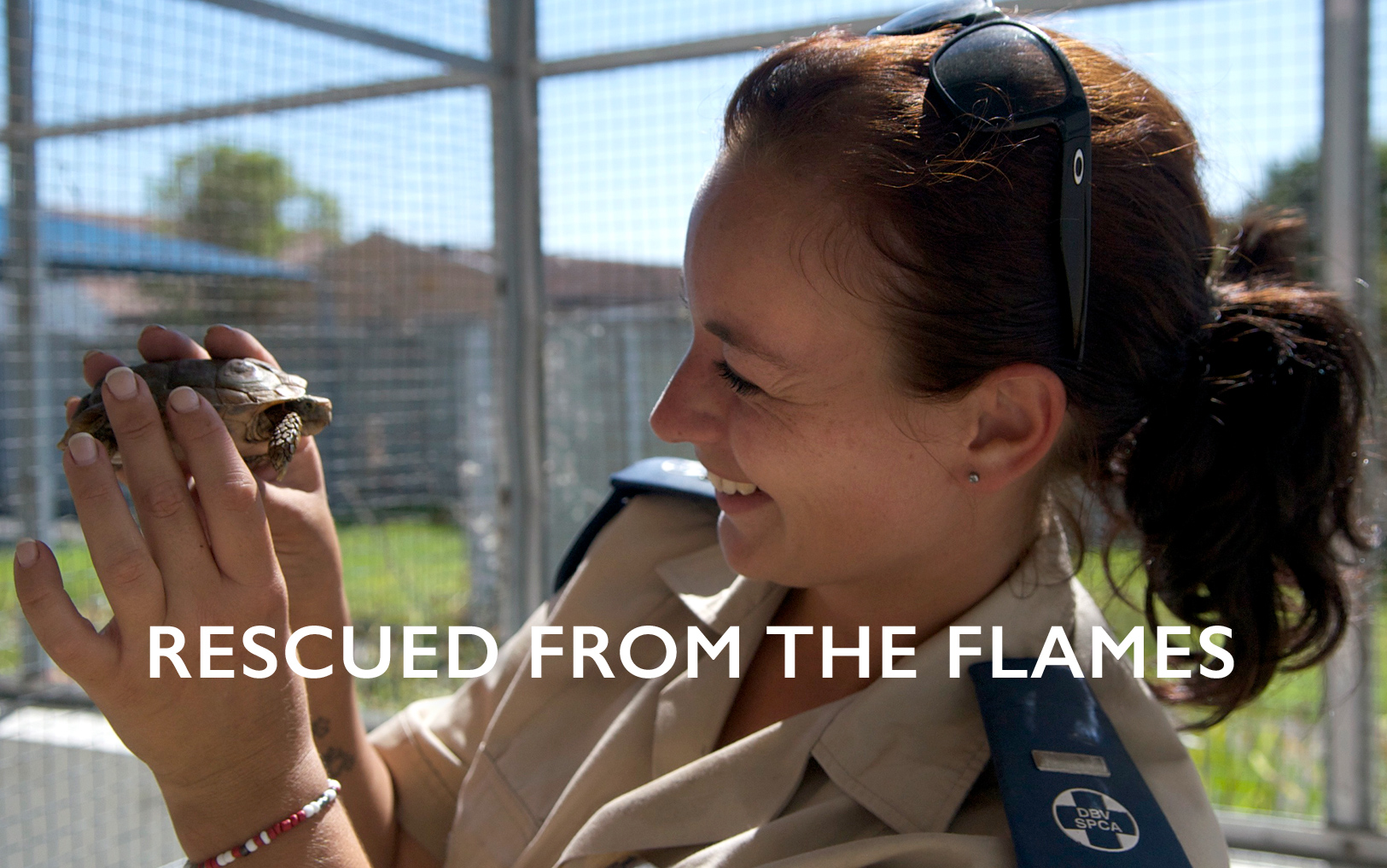 ‘The roots are still smouldering. Every now and then you hear a crash as one of the trees goes down in the forest,’ says Gareth Petterson, Inspector of SPCA’s Cape of Good Hope Wildlife Unit after returning from a rescue mission. ‘We were up there this morning and I thought it was quite warm. Then I looked down to see smoke coming out from under my shoes,’ adds Supervisor Megan Reid.
They had just returned from Klein Constantia on the slopes below Table Mountain National Park where they recovered a porcupine in the smouldering forest. For 5 days a fire had raged through 5,500 hectares of the Cape Peninsula with strong winds and extreme temperatures making it difficult for fire fighters to control. The pads on the porcupine’s feet had been burned and most of her quills were gone having caught fire and disintegrated. ‘Her under-quills seem to have saved her,’ explained Gareth.

Without her armoury of quills the porcupine is defenceless

Looking into the pen where the porcupine was recovering after treatment, I realised just how small she was without her armour; a dark shadow of the creature that will not hesitate to defend itself against the likes of leopards by backing into them with their sharp quills. But without her natural protection she cowered in a corner, wary of everyone.
Another porcupine had been caught in a snare, unable to escape the flames. The feeble hope is that he or she (the remains were unrecognisable) was already dead by the time the fire reached it. All that remained was a charcoal lump at the end of a long constricting tube made of wire fencing. I picked it up, remarking how very light it was, completely devoid of moisture. I regretted it as the charcoal remains crumbled in my hands.
The small Wildlife Unit of just three people, including trainee Shaun Giles, perform an essential task over a vast area of over 11,000 square kilometers. They are often extremely busy rescuing animals and caring for them, but Megan says the most challenging part of last week was not being able to reach animals as the fire raged through Table Mountain National Park. ‘You know there are animals suffering but you can’t get near them. It’s too dangerous, or you could get in the way of the firefighters. We spent most of the week at Lakeside Fire Station feeling helpless as we watched the mountain burn. All we could do was help pack refreshments for the fighters.’

Now this small team are very active as they are able to access the fire-ravaged area. In situations like this they appoint experienced volunteers to help. Mostly they receive calls from the fire department letting them know of wild animals that are injured or in danger, and they often receive calls from the public. Many wild animals have escaped to residential areas on the peripherally of the fire, but unless they are injured or under threat, they compel people not to try and capture them, but instead to leave the animals to their own devices. As Gareth says, their natural instincts have helped them survive situations like this for millions of years.

Agile creatures like baboons are generally able to escape the fire and make their way to safety, but others, like tortoises, are seriously disadvantaged. In walking the slopes, Africa Geographic’s Christian Boix and I came across 4 dead tortoises, and 1 which was miraculously alive. Images of tortoises overtaken by the flames, or rescued alive by fire fighters, have caught the public’s imagination.
There are three rescued tortoises at the SPCA and Megan introduces me to them. She has a soft spot for a parrot beaked tortoise, a cute little character that barely grows any bigger than a child’s hand. ‘What’s it’s name?’ I ask, immediately taken with tortoise. ‘We try not to name them – we don’t want to get too attached,’ she replies. ‘We’ve got to release them back into the wild after all.’
Megan estimated it would be at least two months before the nameless porcupine was ready to look after herself and be released. Plant bulbs are the most common part of their diet and even in the worst fire-ravaged region these bulbs survive to ensure future plant growth and food for the likes of the porcupine.
As I was writing this Megan contacted me with sad news: the porcupine with the burnt feet had passed away, probably due to smoke inhalation. Her death got to me. In the short precarious moment I had spent with the injured porcupine, I had formed an attachment to her.
Now I understand completely why they don’t name the animals.